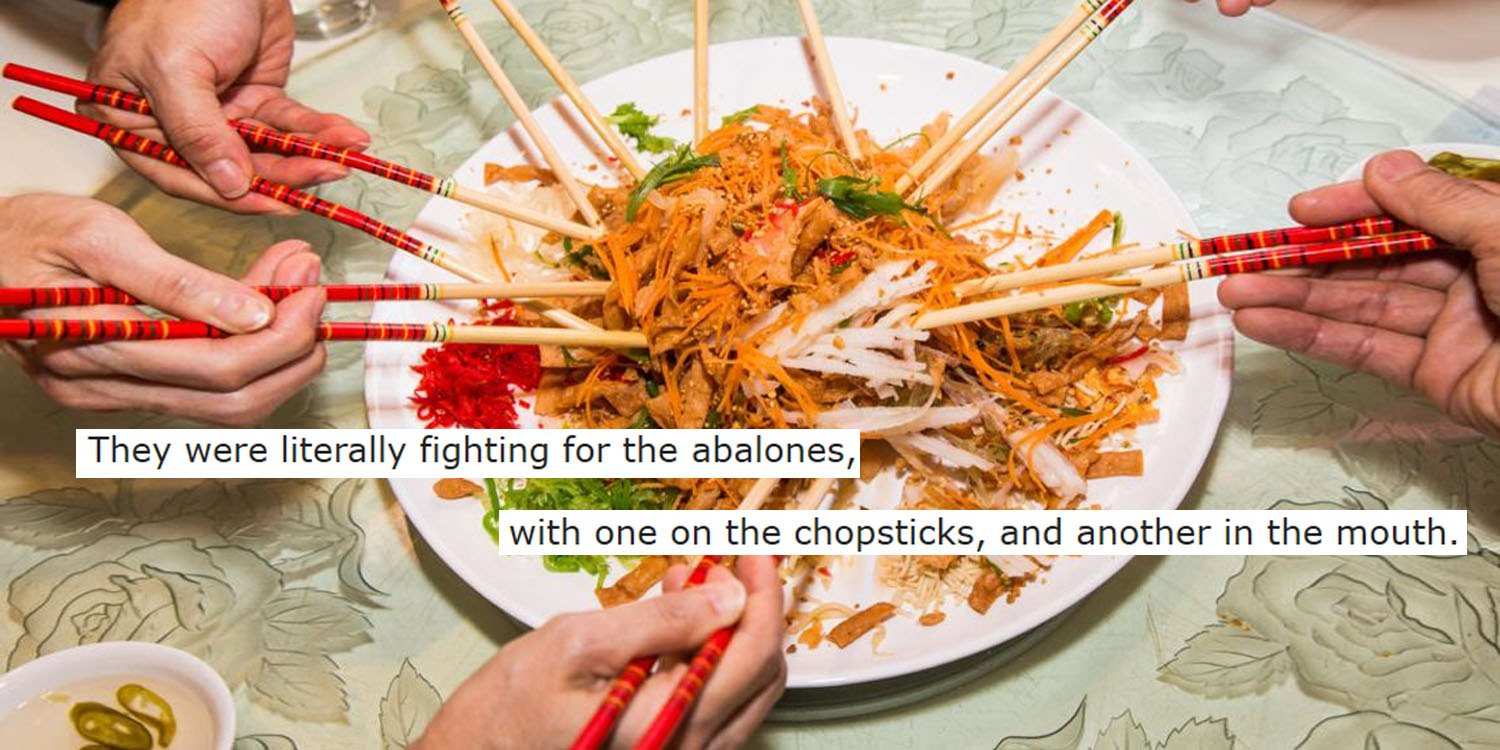 From all-too-familiar questions about our singlehood to lohei blunders, awkward situations are almost unavoidable during CNY.

On Tuesday (21 Jan), a Redditor who goes by the handle u/Mfvd started a thread on the Singapore Subreddit, asking other Singaporeans about their most “absurd” CNY stories.

The thread has since garnered over 700 upvotes and more than 250 comments at the time of this article.

Out of the many stories of kaypoh aunties and offensive remarks, here are 5 stories that we think are the most epic.

1. Relatives fighting for abalone during lohei

The fish in yusheng signifies prosperity and is no doubt the most desired ingredient of the dish.

When this netizen’s mother decided to swap out the fish with abalone, the annual lohei became a ‘chopstick fight’.

Comparing it to the infamous ‘lobster snatching buffet incident‘, the Redditor is appalled by her relatives’ behaviour and calls for more graciousness on the dining table.

2. Relative sent to A&E after fishbone gets stuck in throat

In the same vein, this incident also involves fish and yusheng.

One Redditor shares a funny story about his cousin’s clumsy encounter with fish and yusheng.

Amusingly, the same accident repeated itself the following year.

The lesson here? Don’t swallow your food in a hurry, look carefully and make sure it’s safe to eat.

3. Auntie and starts dabaoing food at the start of dinner

Leftovers are common at reunion dinners and it is not strange at all to bring containers to dabao some of the remaining food.

This Redditor was however baffled when his wife’s aunt whipped out her dabao box at the start of the dinner.

This ‘practice’ apparently wasn’t exclusive to the Redditor’s family. Another netizen soon shared a similar auntie and her dabao story.

4. Selling insurance to relatives during CNY

CNY gatherings are good opportunities for family members and friends to catch up on what had happened over the past year.

This Redditor’s distant cousin, however, would treat the annual gathering as an opportunity to ‘sell’ insurance products to his relatives.

Needless to say, the relatives were rather annoyed by the hard-sell approach, but the insurance seller was apparently too thick-skinned to notice.

Perhaps the most absurd yet common occurrence is the awkward moment when relatives question about your love life.

Especially when they question your singlehood.

Another Singaporean commented that such questions are never-ending, even after marriage.

So if you think walking down the aisle will spare you from the interrogation, that’s where you’re wrong.

Even though some of these situations are not necessarily positive, we have no doubts they will serve as good conversation starters for these families during future CNY gatherings.

That said, have you encountered any similar incidents yourself?

Otherwise, share some of your most bizarre and awkward CNY stories in the comments below!