Bollards are supposed to stop vehicles from ramming into pedestrians.

But sometimes, the vehicle is moving at such a high speed that it takes a few bollards to bring it to a complete halt.

At noon today (19 Nov), a Silvercab taxi ran up the kerb at Cross Street and took a couple of bollards by surprise. The bollards, having spent most of their existence dormant and free of duty, had no chance against the oncoming vehicle.

This was reported on Facebook page SG Road Vigilante. 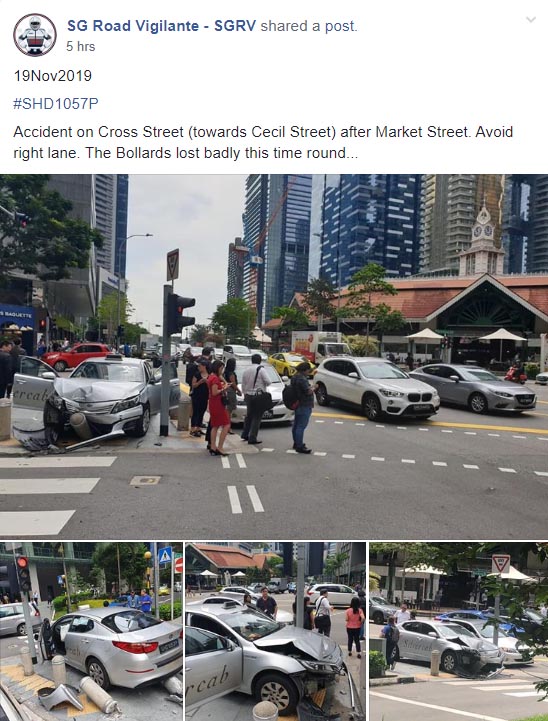 Yeah, the first one in line got crushed pretty bad — ripped off its roots and with its bottom half smashed to bits.

The second one had it a little easier. Though toppled, it remained intact and with a bit of touch-up, will probably be able to resume duty as protector of the pavement, steward of the street strollers.

As for the cab, the front got smashed up bad too. I mean, you’re taking on bollards.

Those bad boys may look harmless, but if you try knocking one of them down, you’re going to get broken somewhere.

Hopefully no one was injured

Given the extent of the taxi’s damages, we hope the driver managed to escape unscathed.

This may sound strange, but kudos to the bollards for doing their job despite it being boring and nasty – like when dogs take a piss on them – 99% of the time.

If they hadn’t stopped the taxi, it could have hit some humans. That wouldn’t be good.