Must Share News – Independent News For Singaporeans
Home Viral S’porean Air Steward Claps Back At YouTuber Who Was Dismayed By SIA... 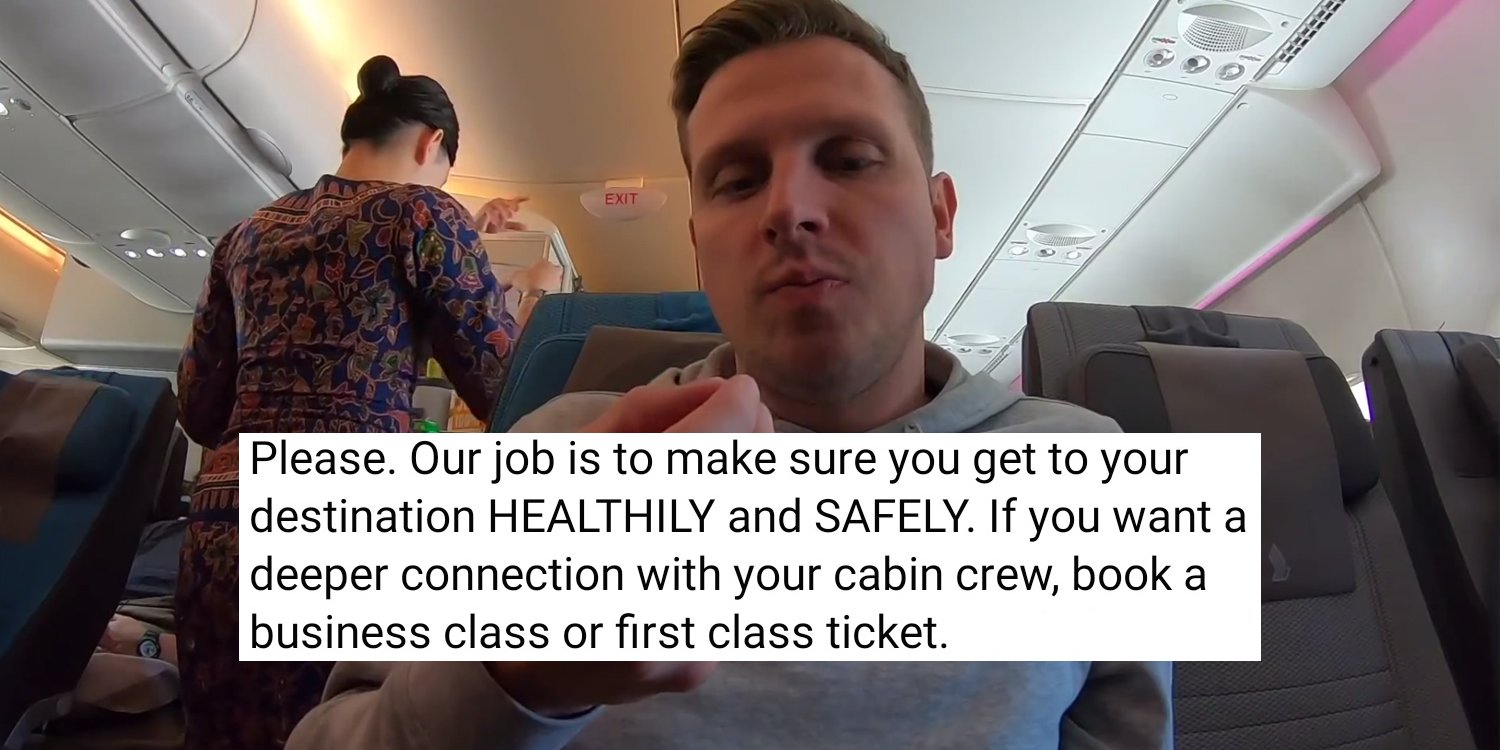 Singapore Airlines (SIA) is one of the top airlines in the world, known for its excellent in-flight services and amenities. 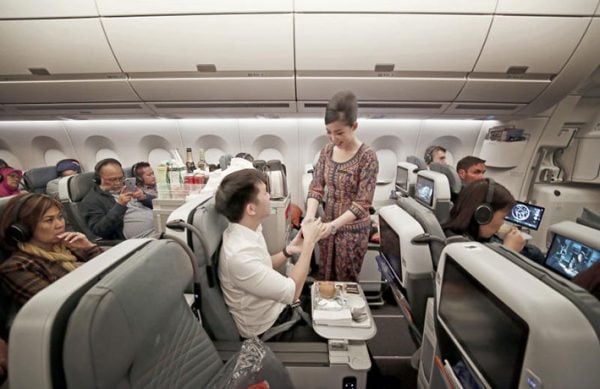 On Tuesday (7 Jan), Josh Cahill – a YouTuber known for his flight reviews – posted a video critiquing his Economy Class flight with SIA from London to Singapore. 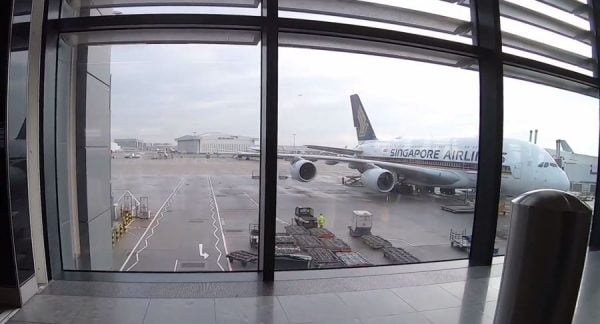 Cahill, however, was disappointed by his SIA experience. In particular, he criticised the crew members for not being “engaging” enough, and even described them as being “robotic”. 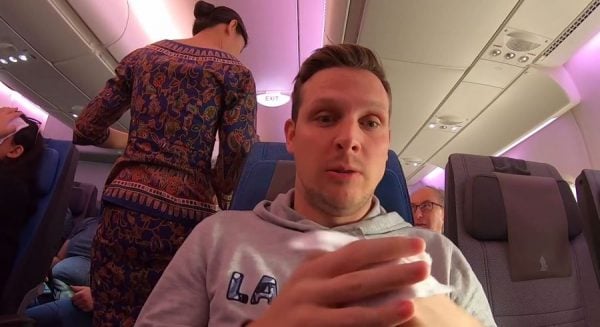 One day later, a flight attendant posted a lengthy rant on Twitter in response to Cahill’s video, claiming that the YouTuber may have been unreasonable with his expectations.

YouTuber was impressed by the food served on board

While Mr Cahill may not have been a fan of the crew members on board his flight, there were other aspects of the flight which lived up to SIA’s ‘best airline in the world’ reputation.

For one, Mr Cahill was extremely impressed by the meal served on his flight. Like many of us, his favourite part of the meal was the ice cream. 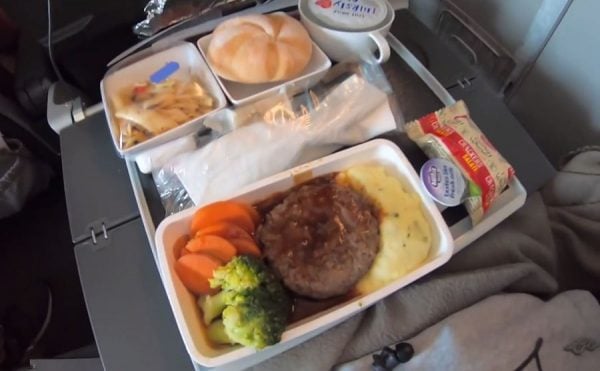 Mr Cahill was also a fan of the amenities such as the washroom and his seat, which was capable of some “generous reclining”. 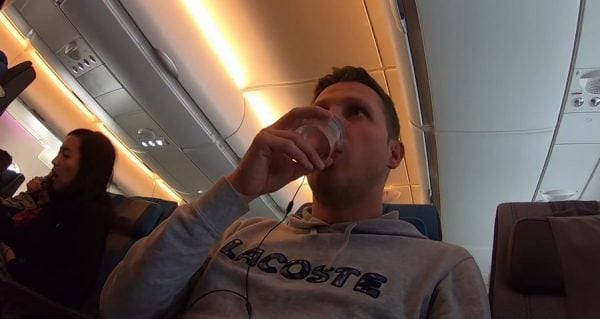 The YouTuber pointed out in his video that the flight’s crew members were apparently a let-down.

Particularly, Mr Cahill claims there was little engagement between them and the passengers.

He added that the crew were constantly “rushing through the aisle hoping and pray(ing) that they wouldn’t get approached by any passengers”.

Because of this, and other relatively minor issues, Mr Cahill deemed the S$1,620 (US$1,200) price tag that came with the London to Singapore flight “not worth it”.

One day later, a Singaporean flight attendant working for an undisclosed airline responded to Mr Cahill on Twitter in a lengthy tweet.

You can read it in full below. 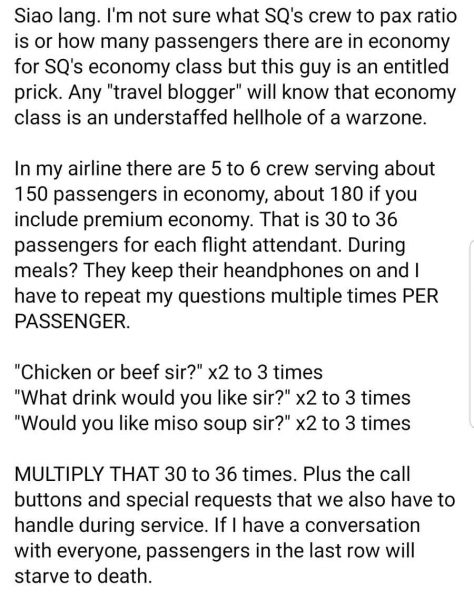 In essence, the air steward pointed out that the ratio of attendants to passengers is 1:30+, if the airline’s Economy Class he’s working for is anything to go by. 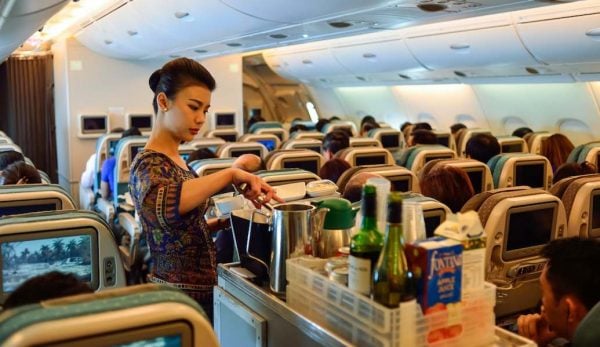 To make things worse, some passengers may take up extra time. He used the flight’s mealtime as an analogy:

During meals? They keep their headphones on and I have to repeat my questions multiple times PER PASSENGER.

Hence, if he were to strike a conversation with every passenger on board, some travellers would certainly “starve to death”.

Crew members also do not have the time to talk to every passenger because of the long list of duties they are tasked with, wrote the air steward.

In ending, the air steward wrote that crew members are only responsible for getting passengers to their destinations “healthily and safely”. He also advises Mr Cahill to upgrade to Business or First Class should he wish to have a “deeper connection” with the crew members. 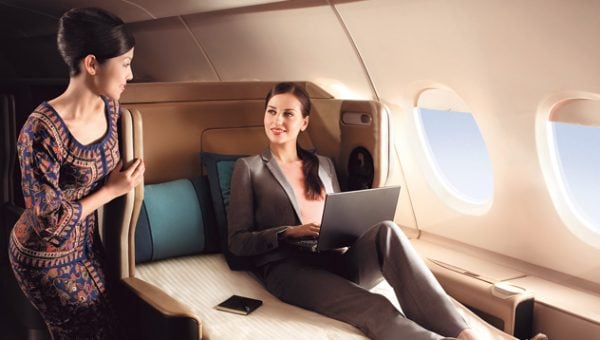 Business Class with SIA. For illustration purposes only
Source

Everyone has their own preferences & opinions

While the air steward may not agree with Mr Cahill’s critique, let’s not forget that at the end of the day, everyone is entitled to their own opinions.

While Mr Cahill might prefer crew members to be more ‘engaging’, others might appreciate a more peaceful journey, and there’s absolutely nothing wrong with both preferences.

Food, leg space, toilets, service — what are some qualities that you consider when you selecting an airline? Share them in the comments below.