Must Share News – Independent News For Singaporeans
Home Lifestyle Branded Content Why I Moved To Work In Thailand In My 20s Despite My... 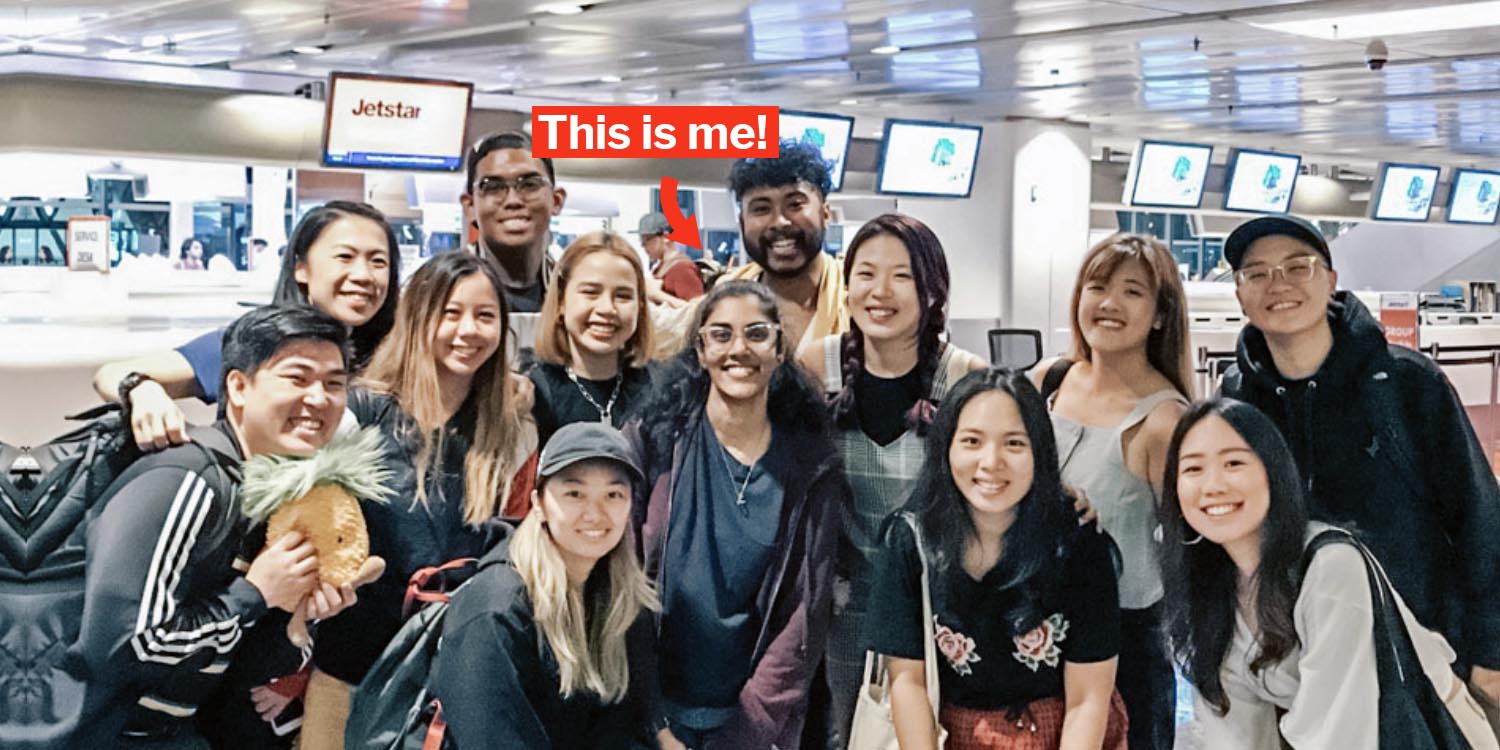 Moving from Singapore to Thailand

Three months ago, I cleared my table at my office in Singapore in anticipation of a new life ahead of me in Bangkok. I was moving to Thailand to assume my new position as Editor for TheSmartLocal’s first-ever overseas branch, and it was a huge deal. This meant a brand new office, a brand new team, and of course, a brand new way of life.

This also meant leaving behind an office that felt like a home, a team I called my family, and a life I’d gotten cushy with.

But allow me to start from the beginning.

In my head, it looks a little like this:

It’s Dec 2018. TheSmartLocal’s staff are gathered for the company’s end-of-year meeting. The big boss, AKA Bryan, is announcing some exciting news.

That’s it. You gotta go to Thailand.

That, folks, is how the story of me moving to Thailand began.

Deciding to move abroad for work

When I first broke the news to my friends and colleagues, I was greeted with a cacophony of oh my god-s and the like. While most of them were obviously excited for me, others were confused. Somehow, the idea of moving to Thailand felt strange to some. Beyond the opportunities for non-stop tom yum and cheap clothes, Thailand didn’t really seem like place to relocate to.

Whenever someone would ask me why, I didn’t have a concrete answer.

Why did I want to work in Thailand?

Everything felt so natural for me up to that point. From the time the news of our expansion broke to me confirming my relocation, moving abroad for work just felt like something I needed to do. 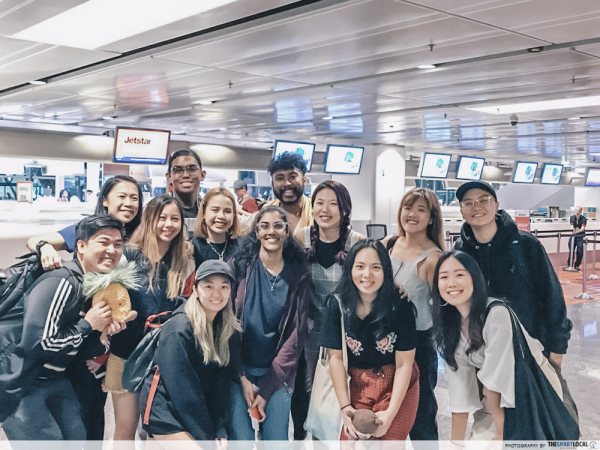 Bidding goodbye to my friends before leaving for Thailand.

It was an insane opportunity I couldn’t possibly pass up. The dream of working overseas had been wedged deep in my headspace for a long time, even as a youngin. So when the door to Thailand opened, it felt like I’d gotten the chocolate bar with the golden ticket. Not going for it would have been silly, and I’d probably still be wondering how life in Bangkok would be like from my desk in Kallang Bahru.

And that scared me way more than the idea of leaving my “cushy life” behind did.

Getting used to life in Thailand

This October marks 3 months since my big move to Bangkok.

Prior to coming here, most of my friends asked me if I was ready to fend for myself, or whether I’d get lonely. I’d previously lived abroad for University, so the idea of being independent (whether in the kitchen or socially) didn’t worry me that much. And true enough, those were the least of my problems – because I had a whole new arsenal of worries in my pocket:

Singaporeans are no strangers to work stress. Work-life balance is practically non-existent to a good percentage of workers in the country. OT-ing till ungodly hours like 3am isn’t a shocker, and things like self-care and family time are not prioritised.

But I wasn’t like that. Nope. I mean sure, maybe I’d stay back to get an article done or wake up in cold sweat at 4am after having a nightmare about getting a client upset. But being a workaholic? Me? Unimaginable.

To set some context, TSL Thailand is made up of 2 Singaporeans including myself and a team of local Thai staff. Once we rolled into work proper, I started noticing little things that set us apart.

At 6.30pm, bags start to get packed. Work is done for the day, and anything that can be done tomorrow will be done tomorrow. In Singapore, staying back for a little bit to “just get this email out of the way” isn’t something we’d bat an eyelid at. Don’t get me wrong, my new team still works hard. They just have different priorities after work hours. 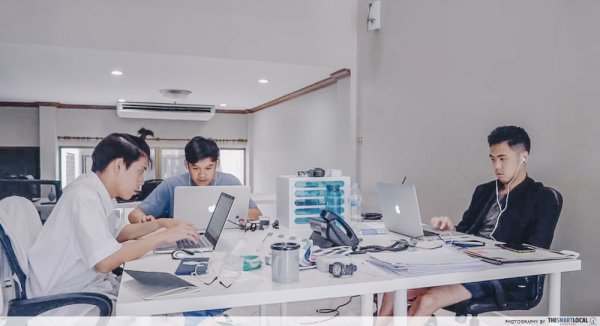 Another thing I had to learn to get used to was the language barrier. Although the heightened job scope of my new role didn’t take much time getting used to, I was now handling a team with some members used to speaking in their native tongue as opposed to English.

It can feel isolating sometimes when you have no idea what the conversation is about, so it did take some getting used to. I signed up for Thai lessons and began peppering my conversations with bits of Thai to the amusement of my new colleagues. But this was great news – I felt more comfortable communicating to staff that did not feel that confident in their English, and at the same time, they were able to help me with my Thai too.

It’s true. FOMO is real, and you will feel it, whether you want to or not.

Moving to another country is like going to a new school for the first time – you’re left to fend for yourself in a whole new environment and make new friends. I had a close-knit social circle back in Singapore which made life back home colourful and full of shenanigans. This made a regular day in Thailand seem washed-out in the beginning.

For example, I went from being in an office with 100+ people and was now in a tiny team of 8, so you can imagine the difference being a little jarring. 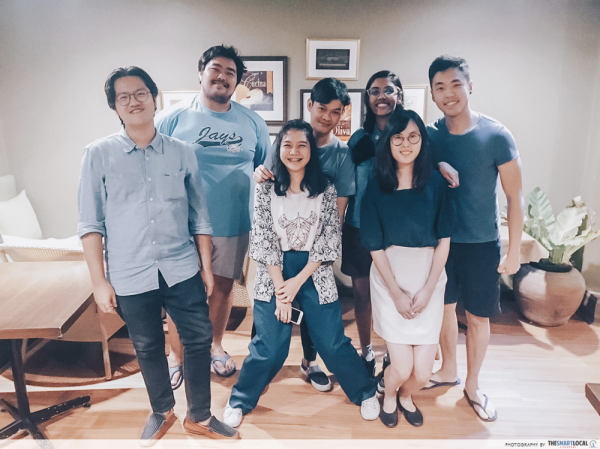 With my new team after enjoying a TGIF dinner

But that meant that it was up to my fellow Singaporean colleague Sean and I to make the difference. Mulling over not being able to go for office parties or have fun with my friends at work wasn’t going to solve a thing. It was now on us to make the active decision to forge a brand new “office identity” and give the same feeling of familiarity back to our new colleagues, just as the pioneer generation of the team back in Singapore had done for me.

During my 2nd week in Thailand, I found myself having an intense episode of anxiety. I’d sit in bed and wonder whether I’d made the right decision to move abroad. While I’m all about the no regretz life, I still had the stress of the big move on my shoulders.

As I tried to rationalise my feelings, I realised that it boiled down to me not wanting to let myself or the people around me down. Making the decision to work abroad is equal parts exciting and nauseating, and it was important for me to remind myself that this was a decision I had 100% made for myself.

I accepted my anxieties and allowed my brain to go into overdrive instead of forcing my feelings to settle. Allowing myself to be uncomfortable was important, because the restlessness made me want to feel better. 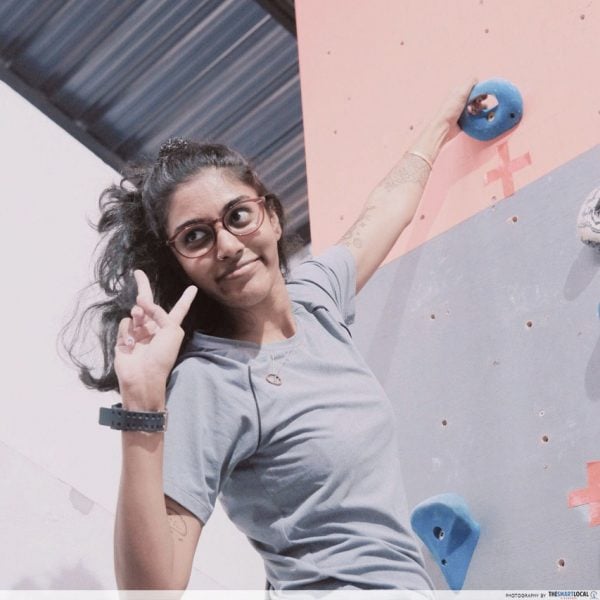 Another thing that helped was finding a new hobby. I decided to join a local bouldering gym to channel my mental stress outward, and it’s been the best decision I’ve made so far. Aside from clocking in some exercise, I’ve also made a bunch of new friends in the process.

Leaving a comfortable life behind 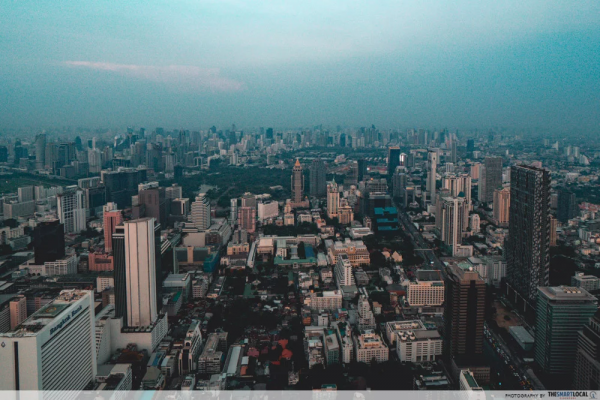 When I say I’ve led a comfortable life growing up, I mean it in every sense of the phrase – and I’m lucky to come from a place of privilege to be able to say that. From having daily lunchbox meals lovingly prepared by my mom to being able to zipline down the Swiss Alps in the name of work, my life in Singapore has been nothing short of the 3 Cs: comfortable, convenient, and contented.

A week before my flight to Thailand, I was frazzled as heck.

But it was too late to back out. Both my feet were in the water and I knew that my fears were mostly baseless, though absolutely normal. There’s a trick Olympic athletes do where they answer the question, “Are you nervous?” with “No, I’m excited!”. In doing so, the storyline shifts. Your brain – and everybody else – is now convinced that your nervousness is actually anticipation.

If you’re dealing with the fear of “making the wrong move”, all I’m going to say is this: stick with it. You will feel miserable and you will feel like you’re going insane, but that’s just part of the adventure.

Getting the chance to work overseas can be a crazy roller coaster ride full of opportunities, but it can be an intimidating decision to make. That doesn’t mean it’s unattainable.

Young NTUC and Temasek Foundation are organisations that have a great pool of resources to help young Singaporeans interested in furthering their careers abroad. With focus on our fellow ASEAN neighbours, they’ve organised events such as the Young NTUC – Temasek Foundation Workforce Programme: LIT ASEAN that took place earlier this month. The event had both Singaporean and ASEAN professionals from countries like Thailand, Indonesia, Philippines, Vietnam and Malaysia come down to share their overseas career experiences. Youths can also opt to be matched to one of these professionals, who have volunteered to be a career guide, for a 4-month mentorship to get some valuable insight on making the move.

Taking the leap of faith is scary, but don’t let that stop you. And with ready opportunities to work in ASEAN countries, it’s all the more easier to take baby steps towards working abroad.

This post was brought to you in collaboration with Young NTUC. This is a guest post contributed by a proud Singaporean who’s now the editor of The Smart Local Thailand.