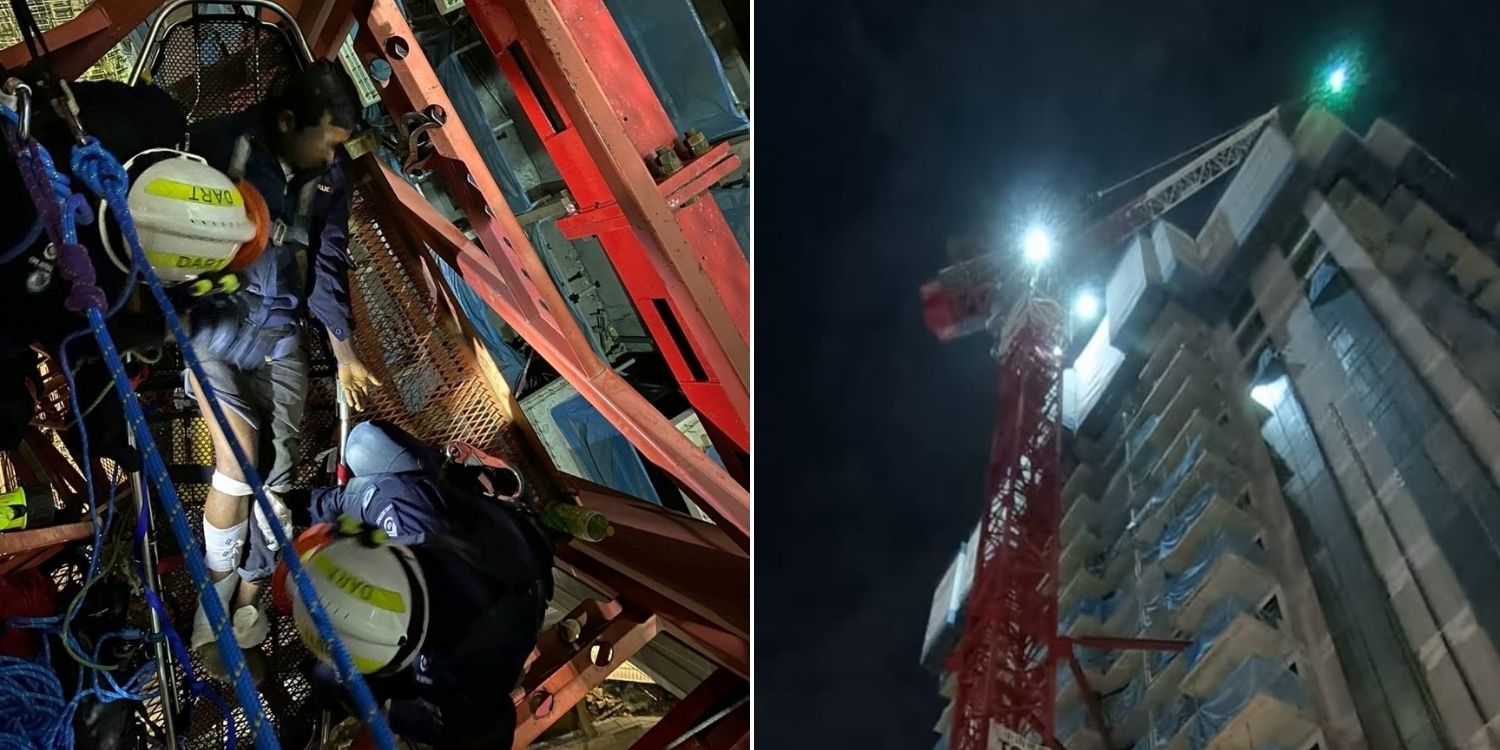 Death-defying rescues are just a day in the life of an SCDF officer.

Construction work is usually quite dangerous, but working from height presents new levels of precariousness.

If a worker gets injured, it can be challenging to get help for him.

So it proved when a worker injured his leg 70m up in the air in a tower crane.

Luckily, intrepid officers from the Singapore Civil Defence Force (SCDF) came to his aid in a high-rise rescue operation. 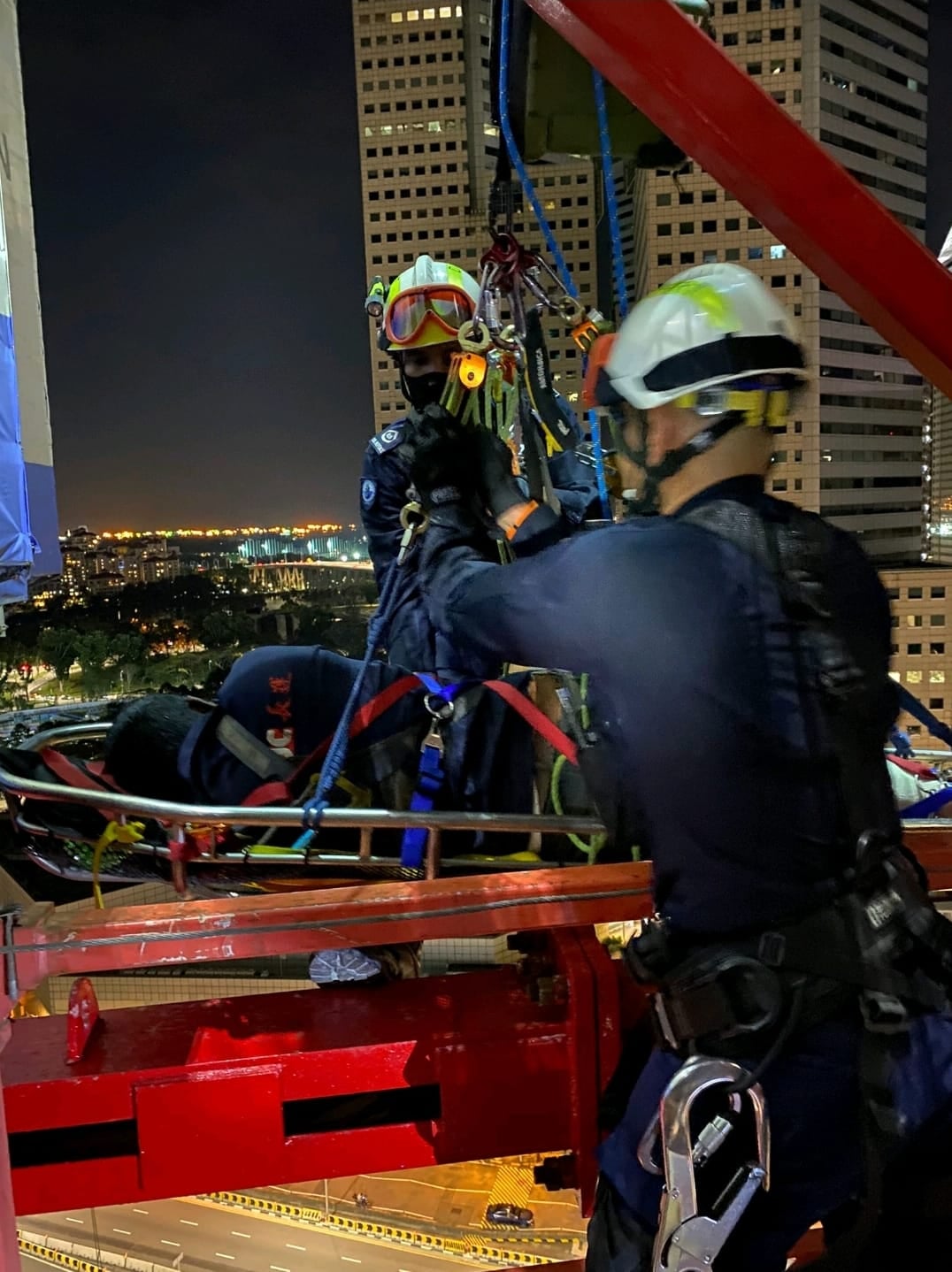 In a Facebook post on Saturday (13 Nov), the SCDF revealed they were engaged in a daring operation the night before. 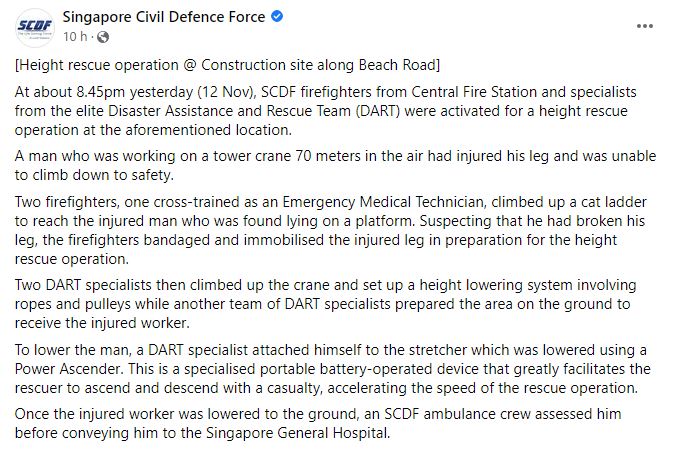 At about 8.45pm, they were told that a man was working at a construction site on Beach Road when he injured his leg.

That would’ve been bad enough for a worksite accident, but it was complicated by the fact that he was in a tower crane.

Thus, he was located 70m above the ground—a height that’s enough to give anyone vertigo.

Because he’d injured his leg, he couldn’t save himself by climbing down, meaning he was essentially trapped.

Considering Singapore is full of tall skyscrapers, SCDF firefighters are probably used to working at heights that would petrify an average person.

2 SCDF firefighters from Central Fire Station were literally up to the job, climbing up a cat ladder to get to the worker.

They found him lying on a platform. 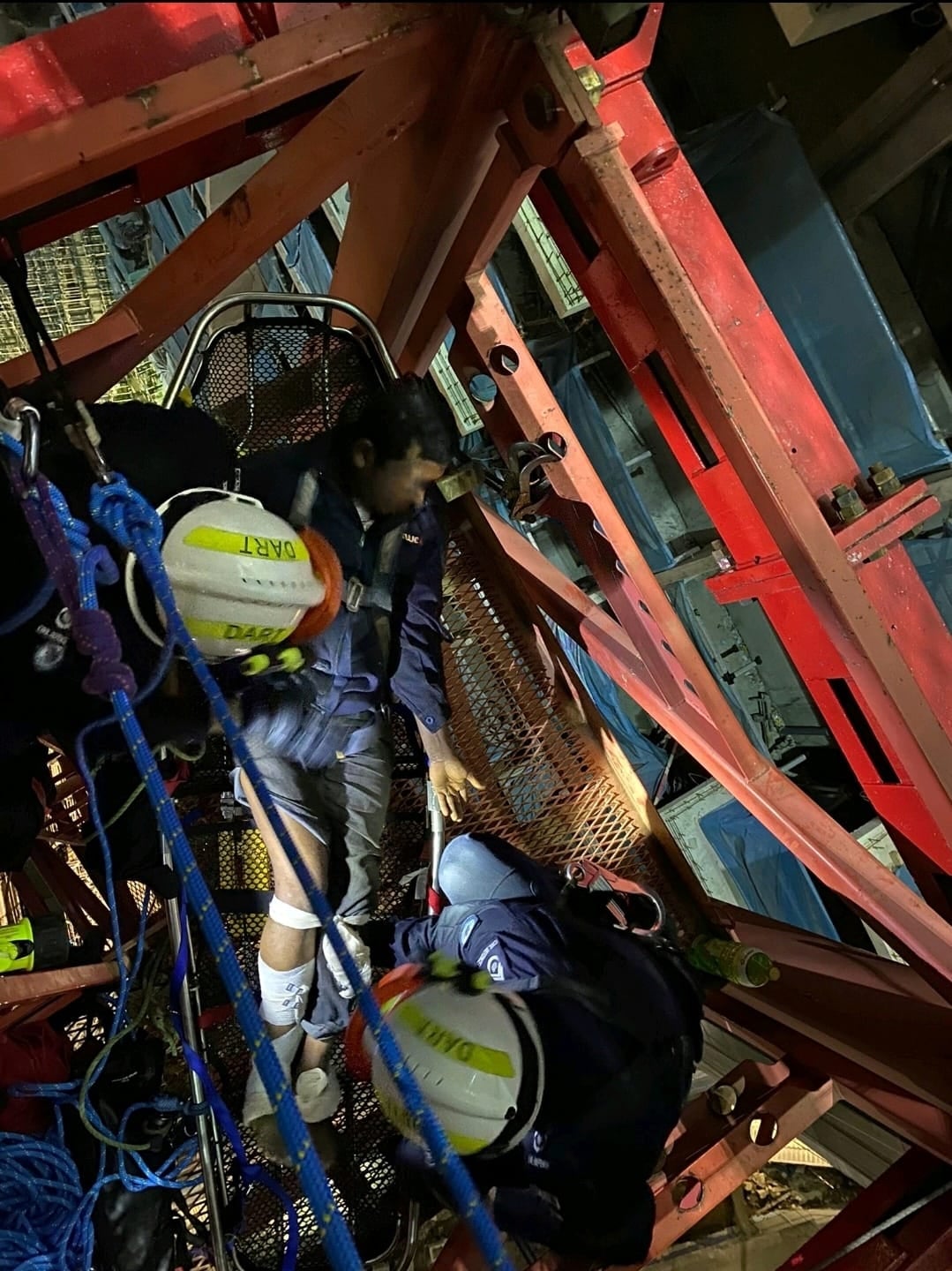 Usefully, 1 of the firefighters had been cross-trained as an Emergency Medical Technician. He suspected the man had broken his leg.

Thus, they bandaged and immobilised the leg so that he could be rescued.

To bring him down, 2 specialists from the elite Disaster Assistance and Rescue Team (DART) were activated.

They climbed up the crane to set up a system of ropes and pulleys to lower a grown adult down from a high place.

Another team of DART specialists on the ground prepared to receive the man.

The worker was put in a stretcher that was also attached to a DART specialist. They were then lowered to the ground by a specialised battery-operated device.

This portable Power Ascender helps move casualties up and down with rescuers, and speeds up the operation.

From an SCDF video of the moment they were lowered, we can tell how high up they are by how small the cars on the road below are. 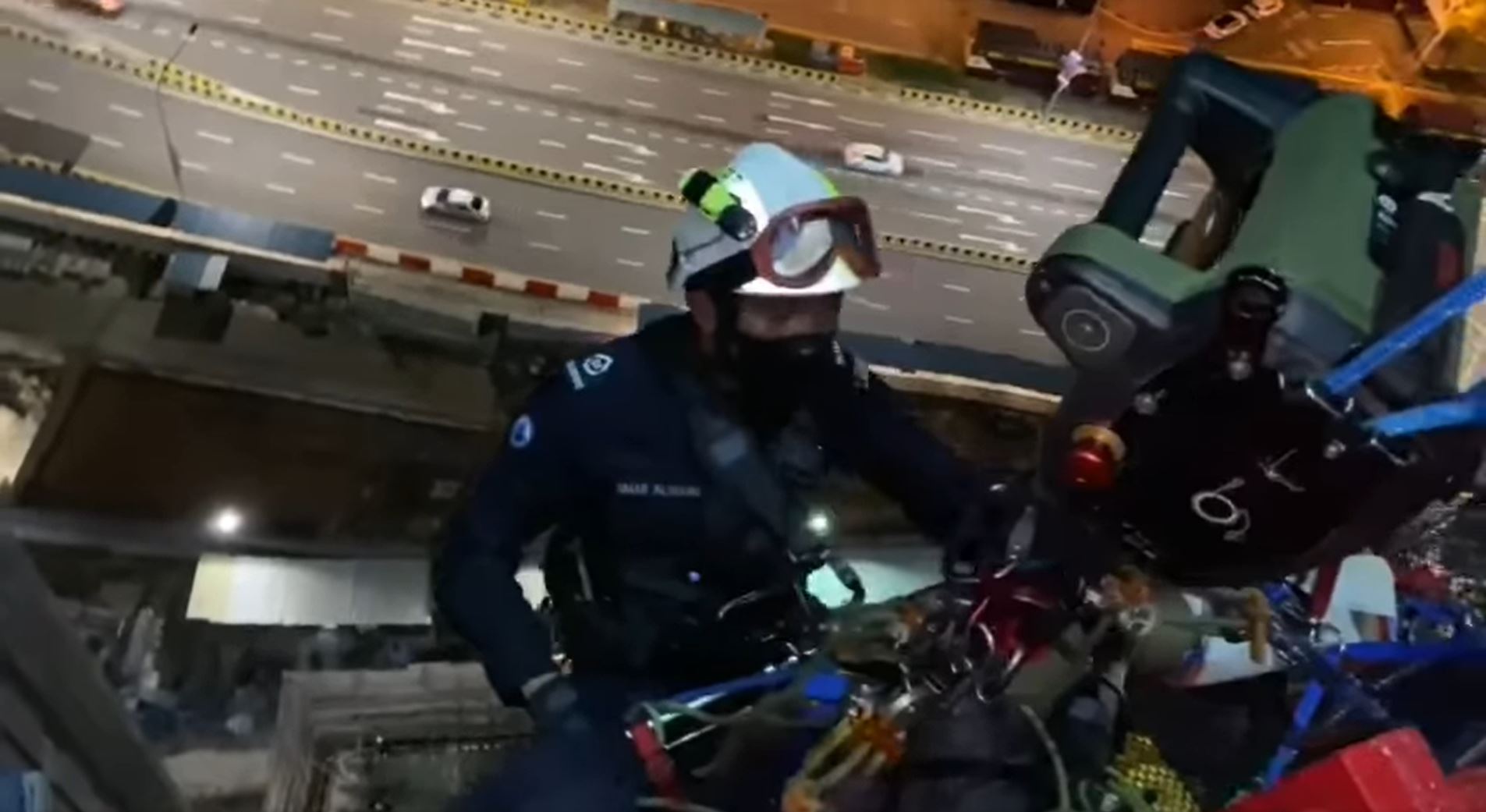 We can’t imagine not being afraid for our own lives at such a height, let alone saving somebody else’s life.

When the injured man finally got down to the ground, he was assessed by an SCDF ambulance crew.

He was then conveyed to the Singapore General Hospital (SGH) for treatment. 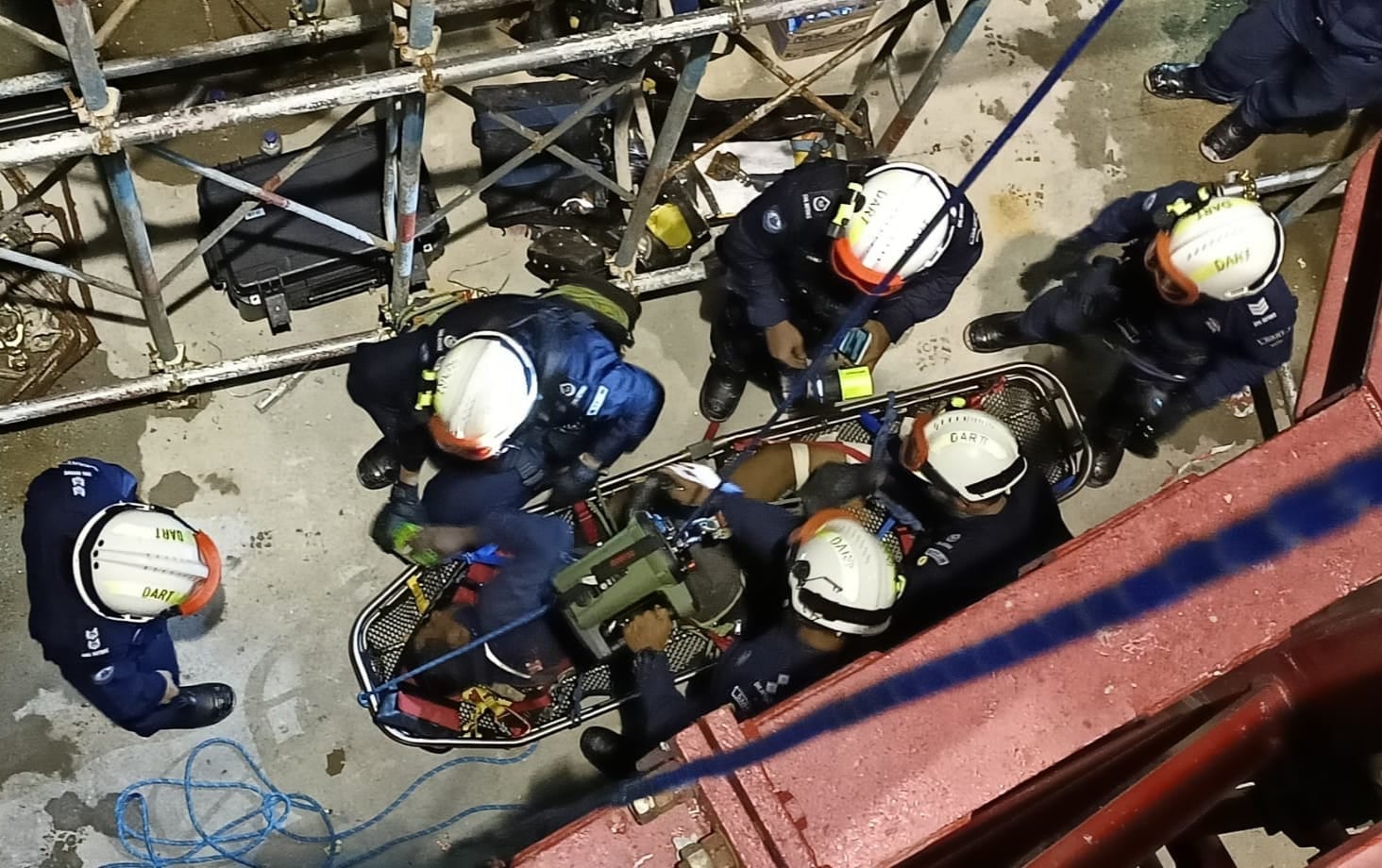 While ordinary Singaporeans may baulk in such situations, it seems it’s just another day in the life of an SCDF officer.

Their courage helps us sleep better at night, knowing we’ll be well-taken care of in times of trouble.