In another profile on an “Everyday Hero”, we take a look at Mr Yee Meng Yong, 54, who owns Punggol Noodles at Lorong Ah Soo Market and Food Centre at Hougang Avenue 1, has worked tirelessly for 22 years to support his family – doing this with just one hand.

As you may have gathered, life hasn’t been a bed of roses for Mr Yee, and he had to overcome many adversities to end up where he is today.

At the tender age of 21, Mr Yee lost his arm in an accident with a concrete mixer.

However, he maintained a positive outlook in life and took over his father’s noodle business when he was 32 years old.

Here’s a photo of the crowd in front of the stall: 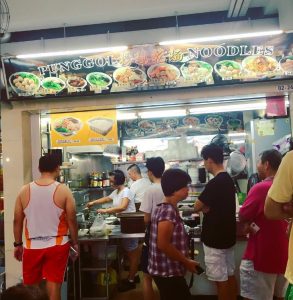 Sadly, she took her life in 2008 by jumping off their HDB block in Anchorvale Road. She passed away in his arms.

In an interview with The New Paper, Mr Yee said it “was the saddest and most painful moment in my life”.

Here’s a photo of Mr Yee and wife from happier times: 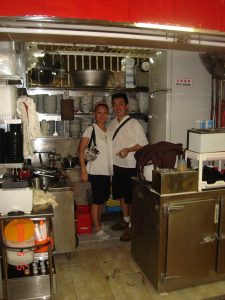 It was only after Mdm Law died that Mr Yee found out about the debts that she had accumulated.

Mdm Law borrow from loan sharks as despite their successful business, they were struggling financially. The couple had to put their two eldest children through their polytechnic studies, among other financial obligations.

However, Mr Yee has refused to blame his late wife, and explained that she did it with good intentions.

Raving Over His Food

Netizens have raved over the food Mr Yee sells, with a high-profile fan in blogger Mr Brown: 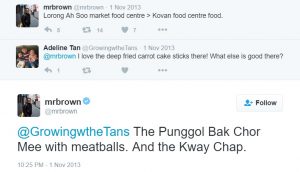 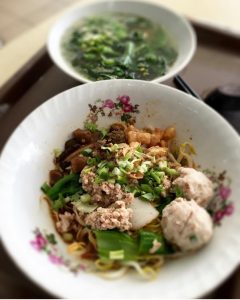 Mr Yee’s honest and uncomplaining way of life has won plaudits from netizens on Facebook, who say we should be thankful for the little things and view life positively, like him.

Mr Yee’s story has both touched and inspired us. Here’s to many more years of filling happy customers with your delicious bak chor mee, Mr Yee!