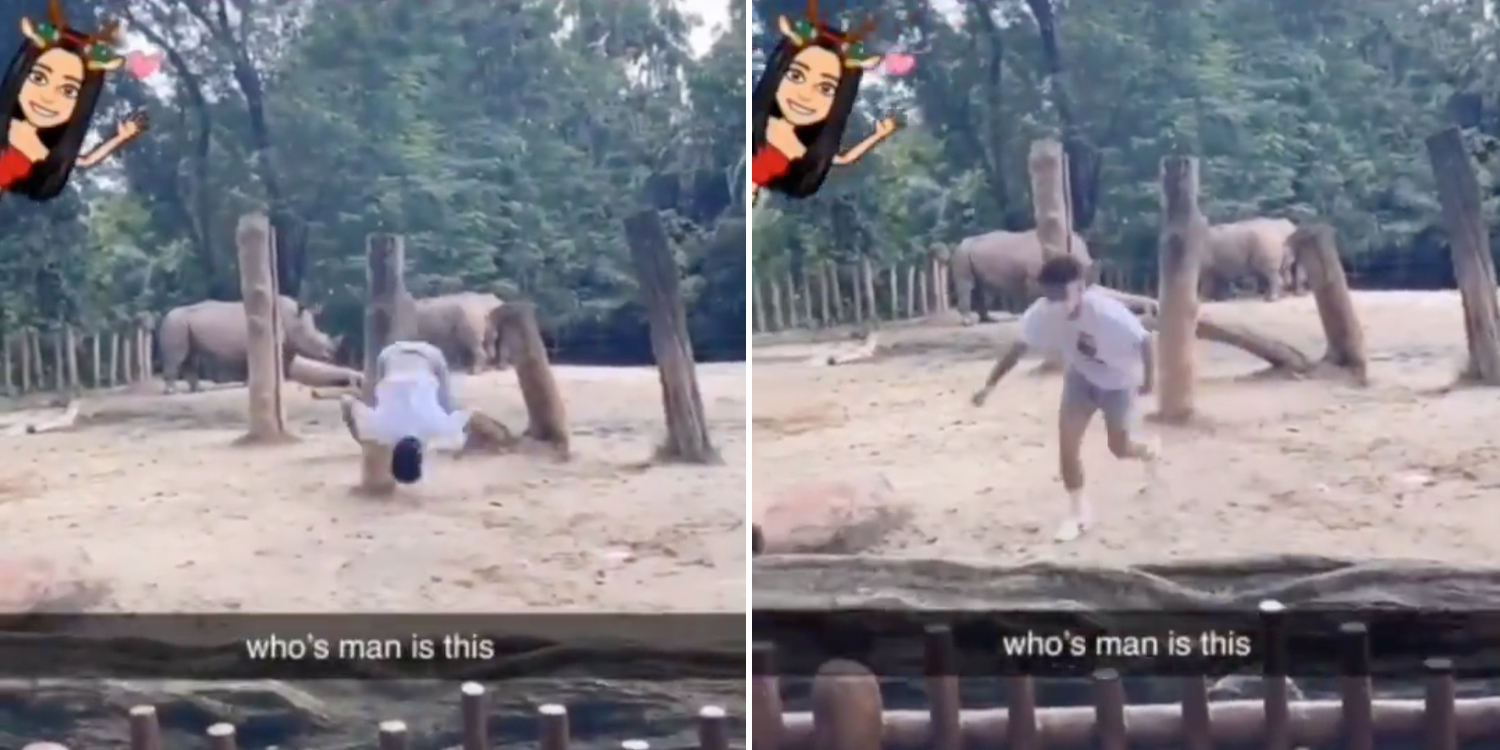 These days, many are willing to go to great lengths in the name of chasing clout on social media platforms.

Back in Dec 2020, a 19-year-old jumped into the rhino enclosure at Singapore Zoo and did a backflip — all for a TikTok video.

On Monday (12 Jul), the man was charged with criminal trespass for pulling the TikTok stunt. He also faces multiple charges for mischief and vandalism over separate incidents.

His 18-year-old companion that filmed him doing the stunt received a warning for abetting criminal trespass.

Charged with trespass & mischief after stunt in rhino enclosure

According to The Straits Times (ST), Ralph Wee Yi Kai, 19, was accused of trespassing into a Singapore Zoo enclosure on Monday (12 Jul).

On 11 Jul, police said they were informed that the man allegedly trespassed into the white rhino enclosure on 17 Dec 2020 at about 5.40pm. The TikTok video of him performing the stunt has gone viral on social media. It shows him running into the enclosure, before doing a backflip and jumping over the fence to get out.

2 rhinos can be seen in the background. You can view a Twitter reshare of the video below.

Preliminary police investigations on the night of the report identified Ralph and his companion.

His companion, an 18-year-old woman, was helping him film at the time, reported Channel NewsAsia (CNA).

The police issued the woman a stern warning on 8 Jul for abetting criminal trespass, following investigations and consultation with the Attorney-General’s Chambers.

According to ST, police also warned that they take a strong stance against persons who blatantly disregard rules of public attractions and commit selfish acts that may endanger their lives.

He will return to court next month after being offered a bail amount of $15,000.

Besides that, he also faces vandalism and mischief charges in another case. He’s accused of hitting the side mirrors of a Mercedes Benz and BMW on 9 Oct 2020.

On the same day, he allegedly hit the information board at a bus stop along Sixth Avenue.

According to CNA, he caused damages of about $900 to public property. Investigations are pending for an additional charge.

Hopefully, this incident will remind everyone of the importance of being a responsible and law-abiding citizen in public spaces.

After all, Singapore authorities are swift in taking action whenever there’s an alleged crime.