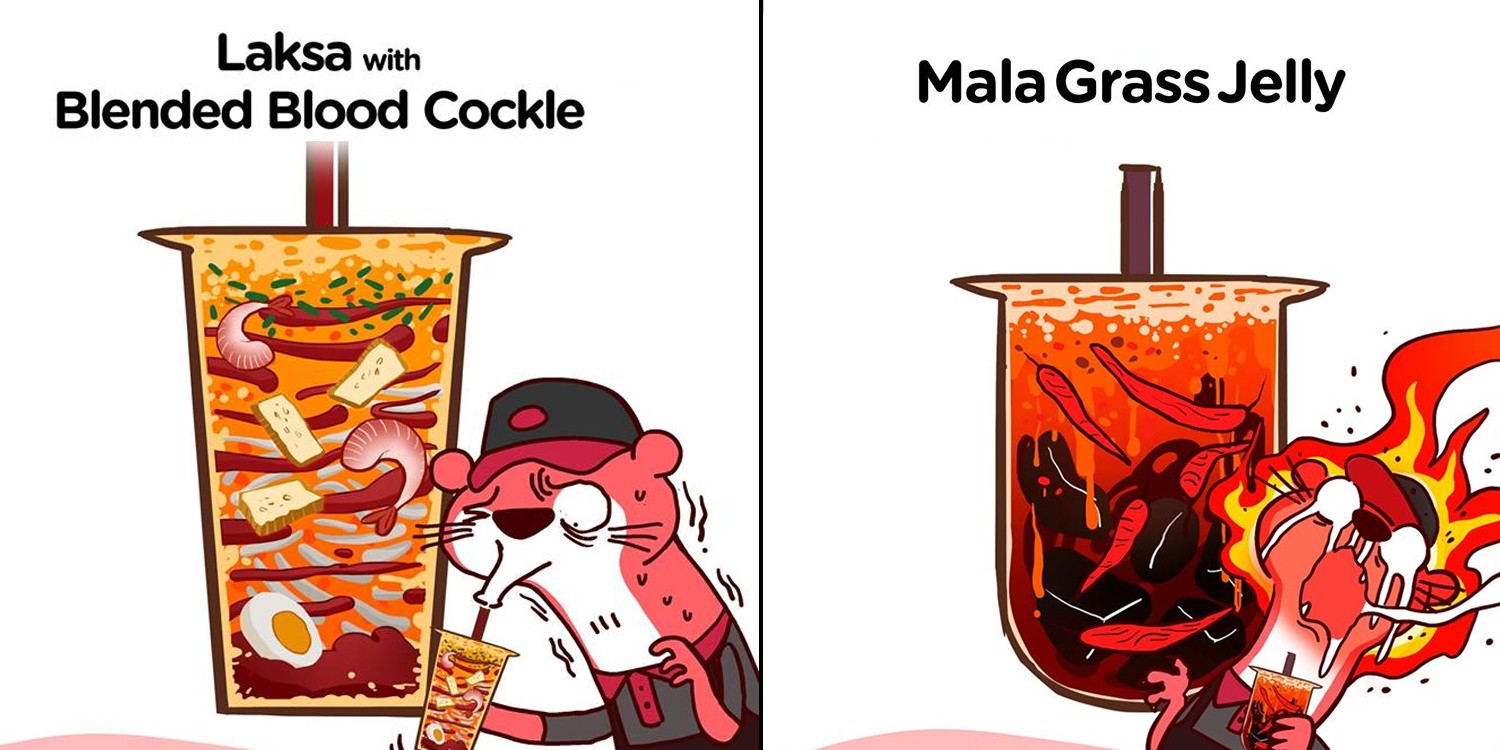 Laksa, mala hotpot, and bubble tea are some of Singaporeans’ favourite dishes.

But have them all together? Now that’s equivalent to a forced trip to the washroom.

On Tuesday (21 May), a Singaporean artist behind Robert the Otter – a cartoon otter – uploaded several bubble tea fanart that are straight-up bizarre, yet hilarious. 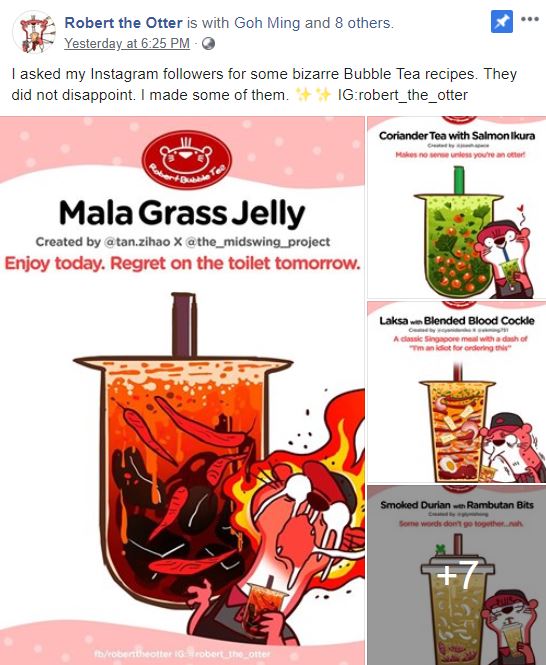 You’d think that mixing something ‘cooling’ like grass jelly would help to counter the ‘heatiness’ from mala hotpot. 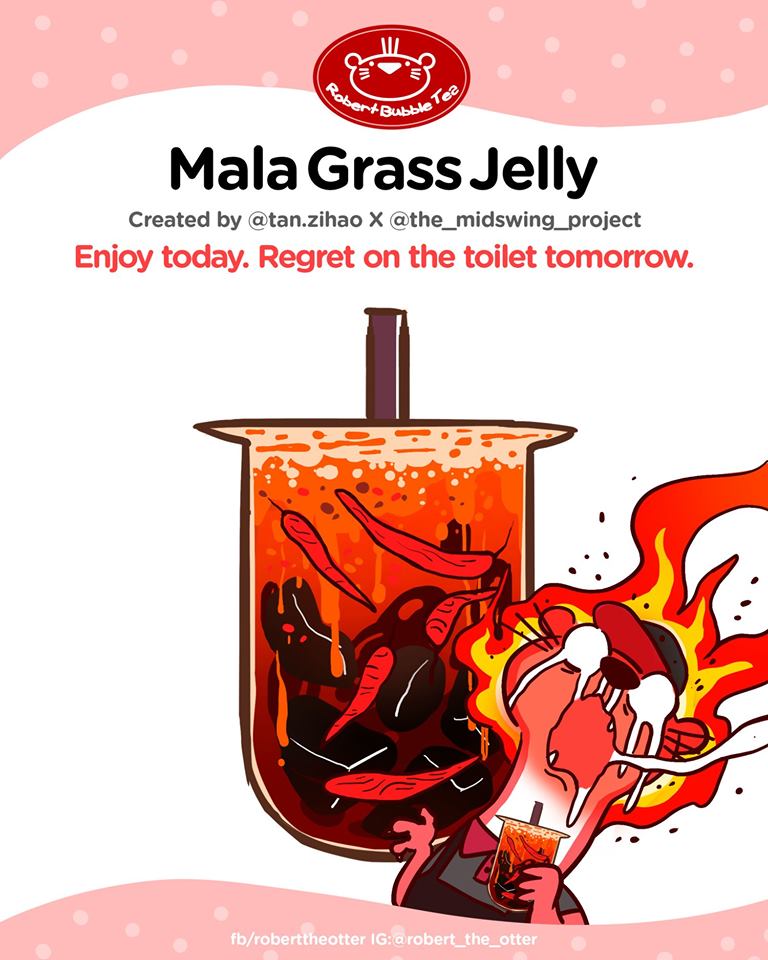 But we really doubt that’s how it works. This drink will probably earn you repeated trips to the toilet instead.

For some, the mere sight of coriander is enough to make us gag. Add them to our favourite salmon roe? Now that’s will surely make us roe-ing in pain. 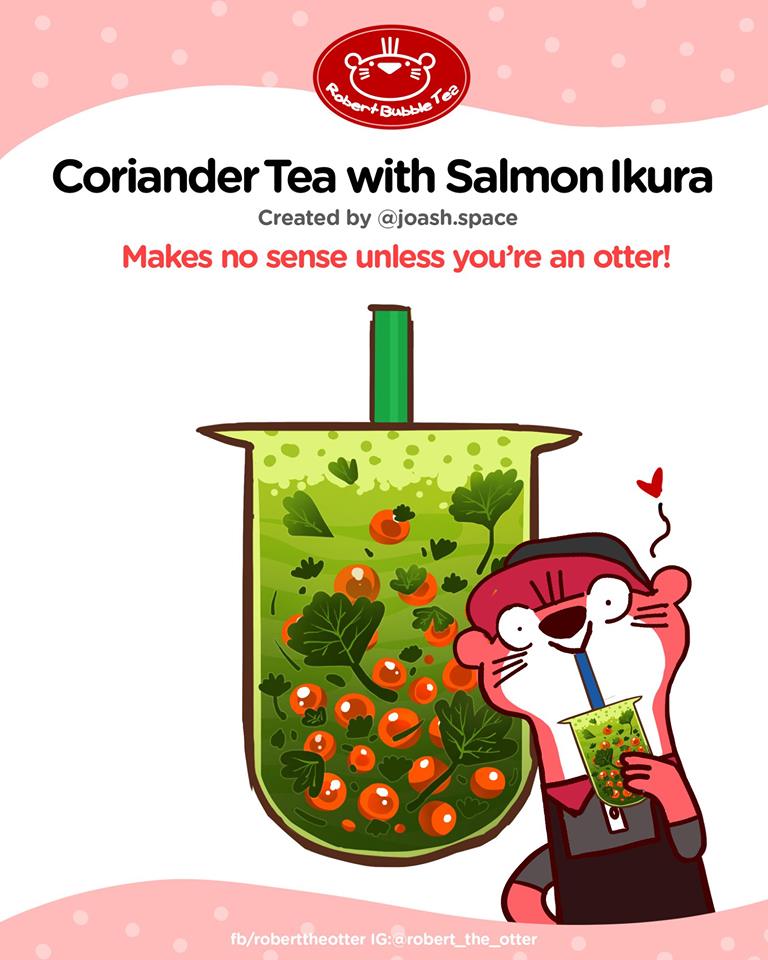 Fresh, bloodied hum may be the perfect complement to a piping hot bowl of laksa. But blend them together and you end up with a perversion of the original Peranakan dish. 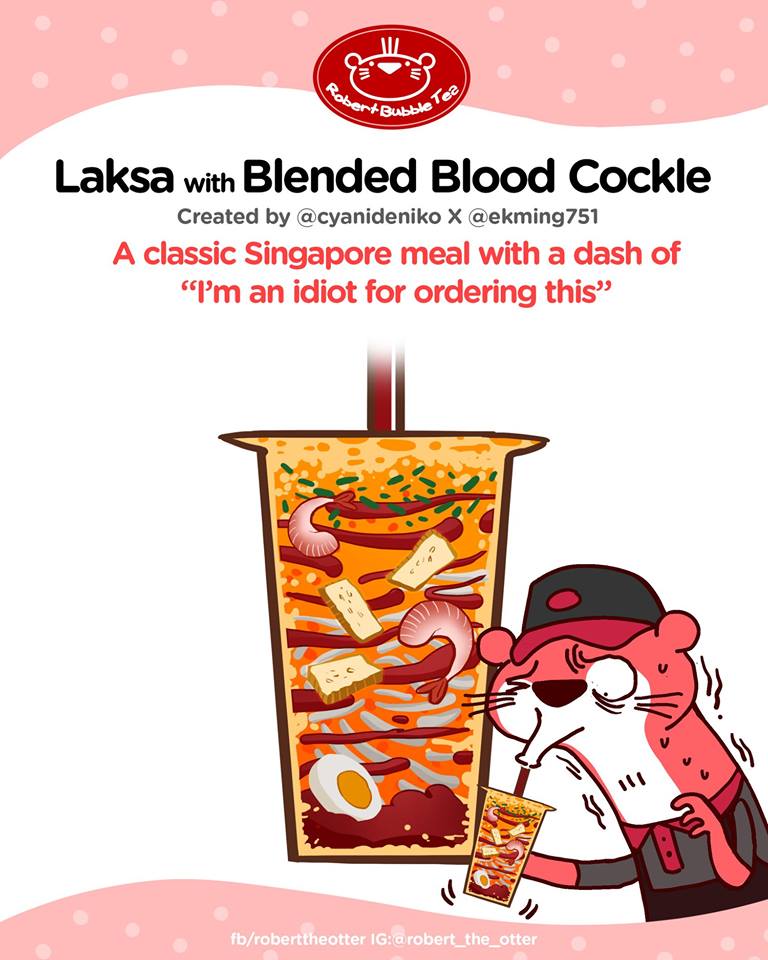 Durian and rambutan are two of our favourite fruits. Mix them both and well, it honestly doesn’t sound that bad. 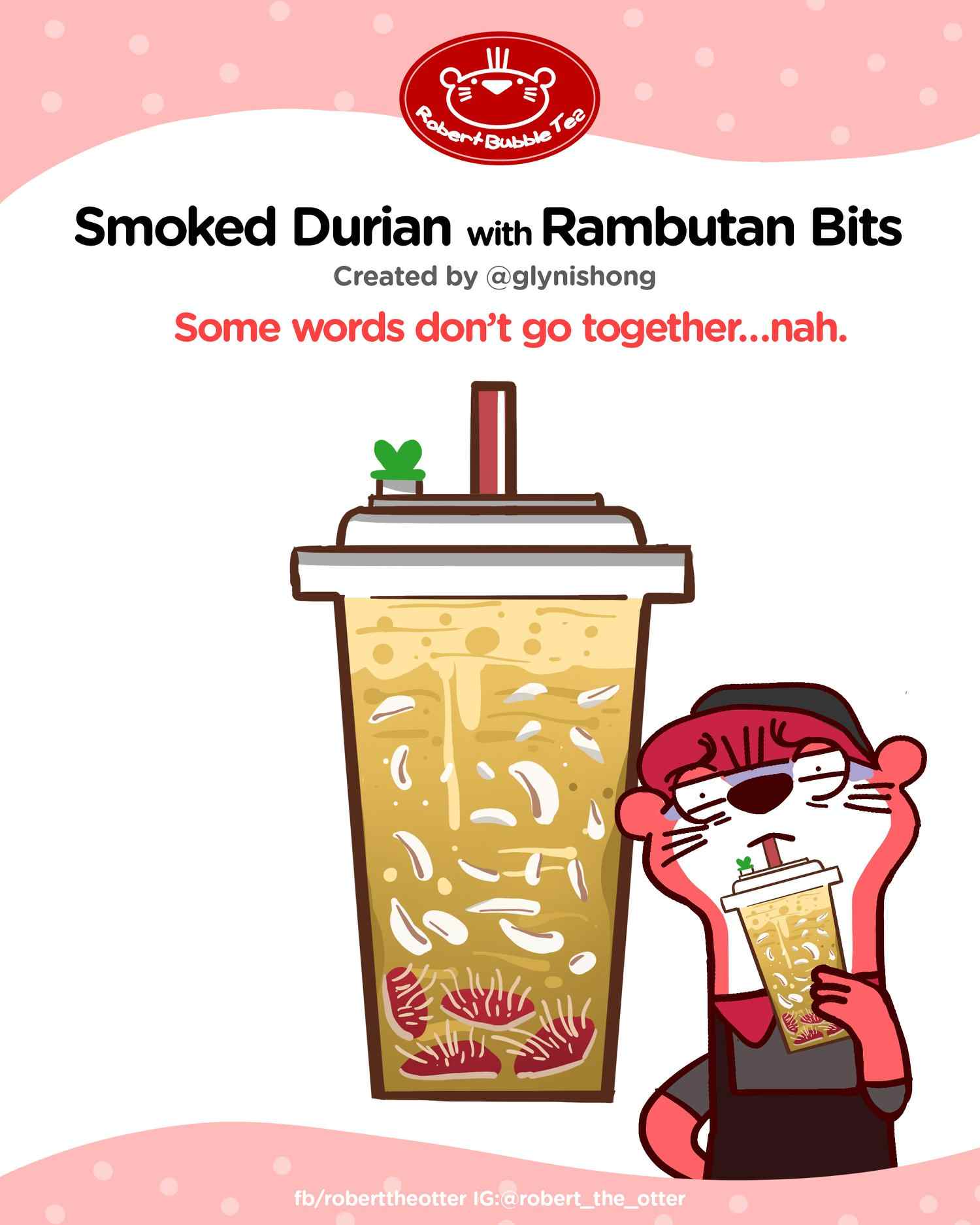 It’s quite hard to hate on chilli crab. But this artist may just have found a way to make us loathe the dish. 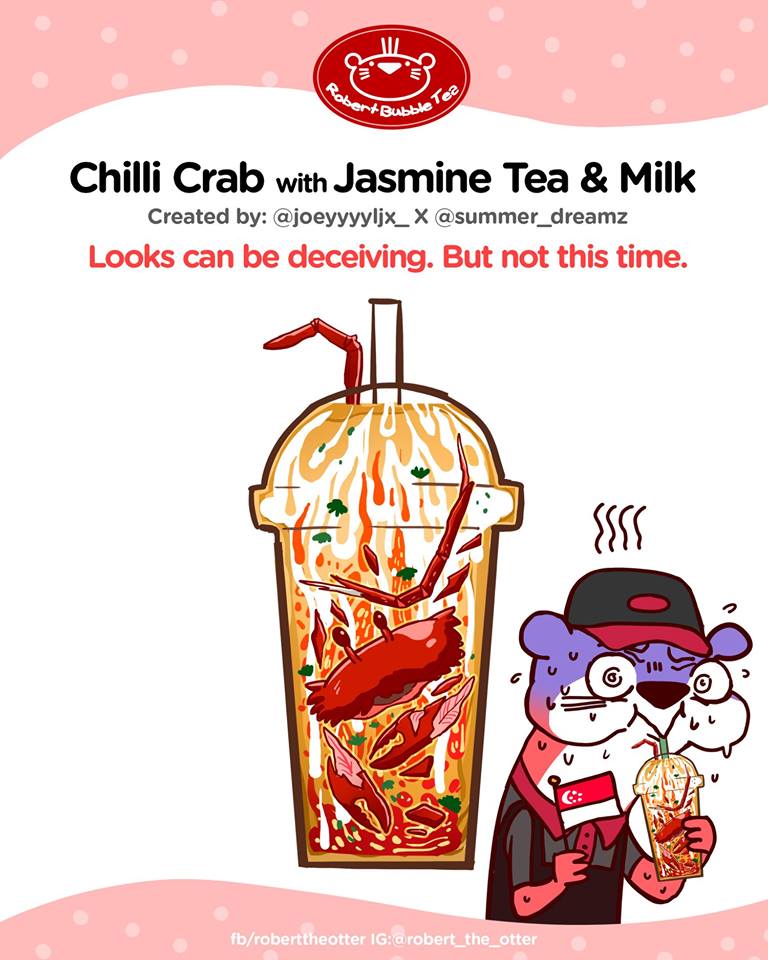 As for what you’re about to see next, we have no idea why anyone would come up with such a horrific mixture. 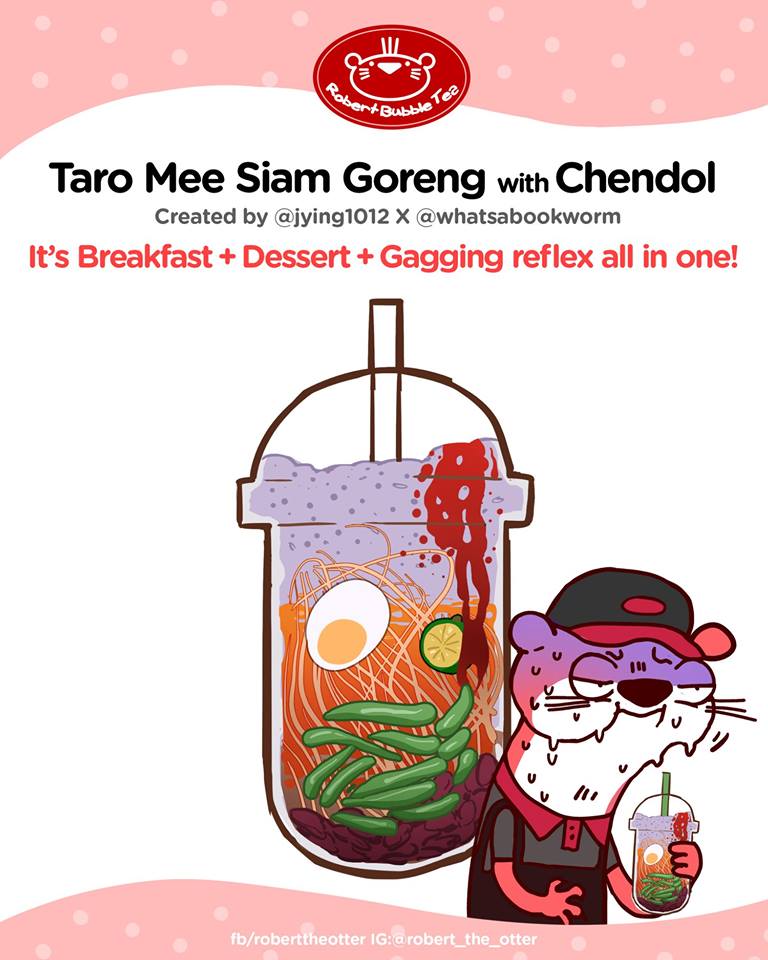 Perhaps this would make even the most desensitised of gag reflexes work.

If the recently-discovered century egg cheesecake isn’t strange enough for you, perhaps this cup of bubble tea topped with century egg and blue cheese will be enough to truly disgust. Poh Chai Pills are used to cure indigestion, not cause it, which will surely happen to most of us if we choose to consume this drink. 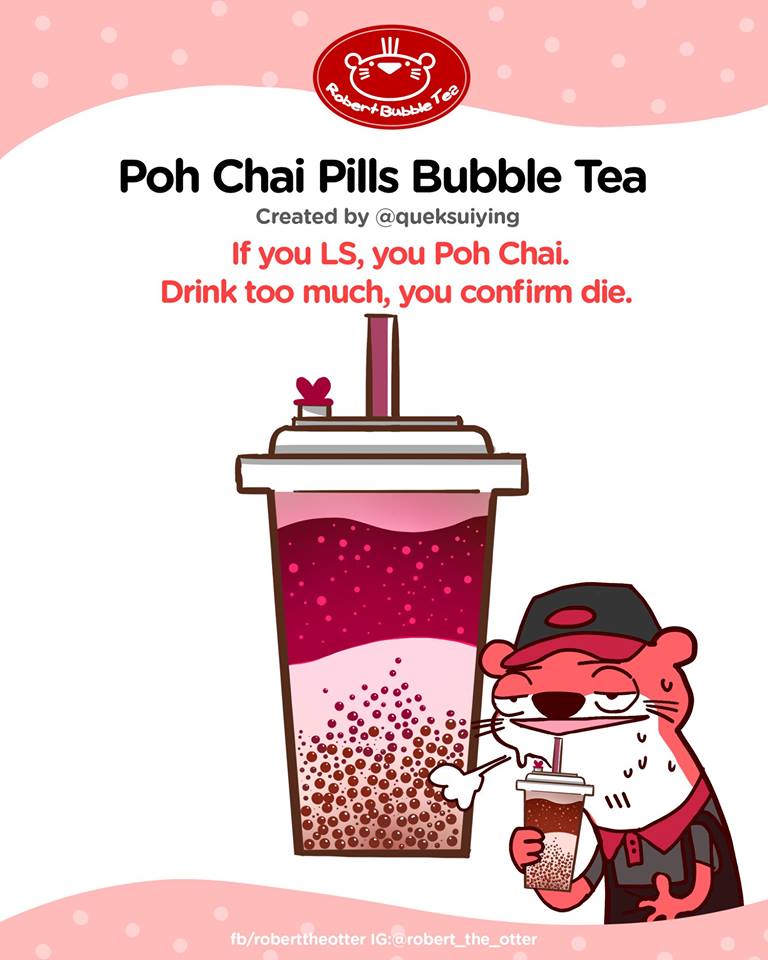 On the other hand, Baileys topped with a generous amount of boba pearls sounds like a pretty delish cure for insomnia! If you know someone who doesn’t mind having a go at the weirdest food combinations, tag them in the comments below!

You never know, they might find an enjoyable concoction from the recipes above.

Or if you have any bizarre concoctions of your own, you can share them in the comments below too!