For those who require an aid such as a wheelchair to move, getting around on public transport may not be easy.

The situation became even more challenging for an elderly passenger when a part of her wheelchair fell off while she was aboard an SBS bus. Thankfully, the bus captain came to her rescue.

A fellow passenger who witnessed the incident recorded it, singing praises for the bus driver.

In the Facebook post on 20 Feb, Mr Danny shared his encounter on bus service 154 from Boon Lay at around 9.30pm that night. 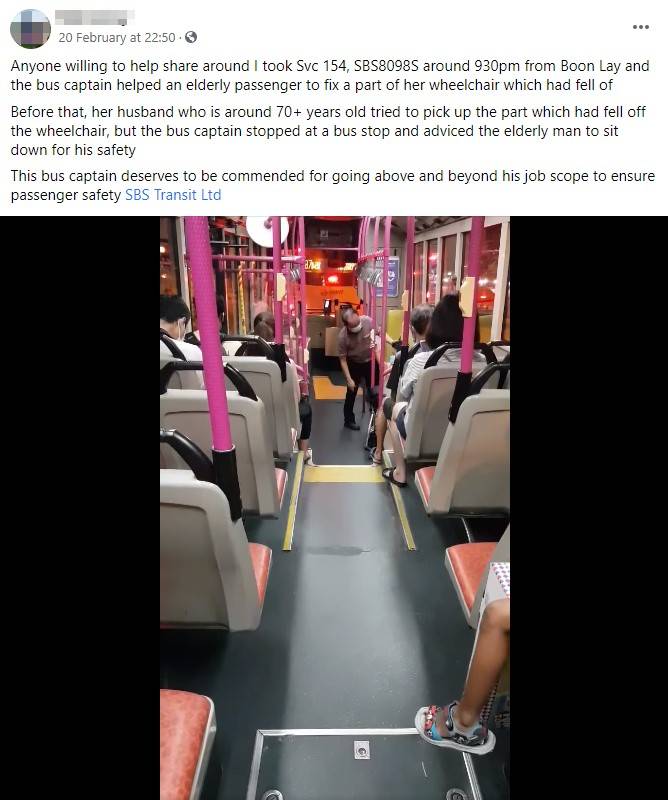 He had observed an elderly man whom he guessed to be in his 70s trying to pick up a part of his wife’s wheelchair that had fallen off.

Quickly noticing this, the bus captain stopped the vehicle and approached the elderly man.

Telling the elderly man to have a seat, the bus captain proceeded to pick the object up and attach it back to the wheelchair.

Checks that wheelchair is secure before moving off

After doing that, he also made sure to check that the lady’s wheelchair was secure, before returning to his seat.

Moved by the bus captain’s kindness, Danny shared the clip on Facebook and commended him.

He even tagged SBS Transit in hopes that they’ll recognise the bus captain’s deeds.

Kudos to the bus driver

While bus captains or drivers’ job scopes mainly require them to ferry people from one point to another, some go above and beyond that to serve their passengers.

This particular driver surely did, so kudos go to him for having the heart and initiative to help.

We should all take a leaf out of the driver’s book and aim to help those in need when a situation like this arises.