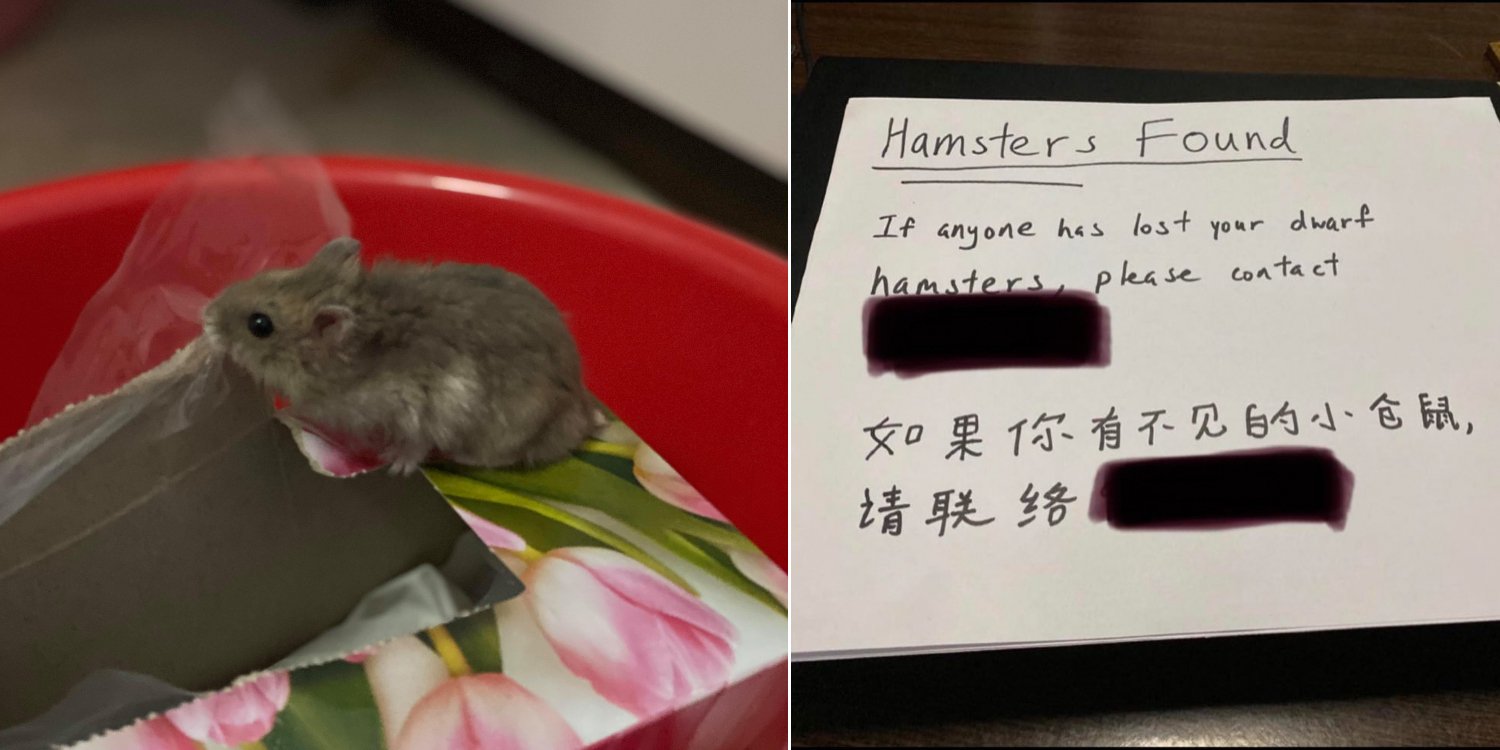 Cat Brings Back 2 Live Hamsters In 2 Days, Likely To Thank Family Who Rescued & Adopted Her

Cats are mysterious animals. Most of the time, we don’t know what they are thinking.

But sometimes, they try to communicate a message through their actions. For example, cats tend to bring back animals – dead or alive – to their owners, and experts say they do this when they think of you as family.

For one female calico cat in Singapore, she brought home 2 hamsters – alive and well – in 2 days to her owner, according to the owner’s Facebook post on Sunday (11 Oct).

Bewildered, she wondered where these hamsters came from. Hence, she decided to seek their owners by pasting posters all over her block in Chai Chee. Befuddled, she posted about it on Facebook in search for the hamster’s owner. She even pasted posters all over her block in Chai Chee. 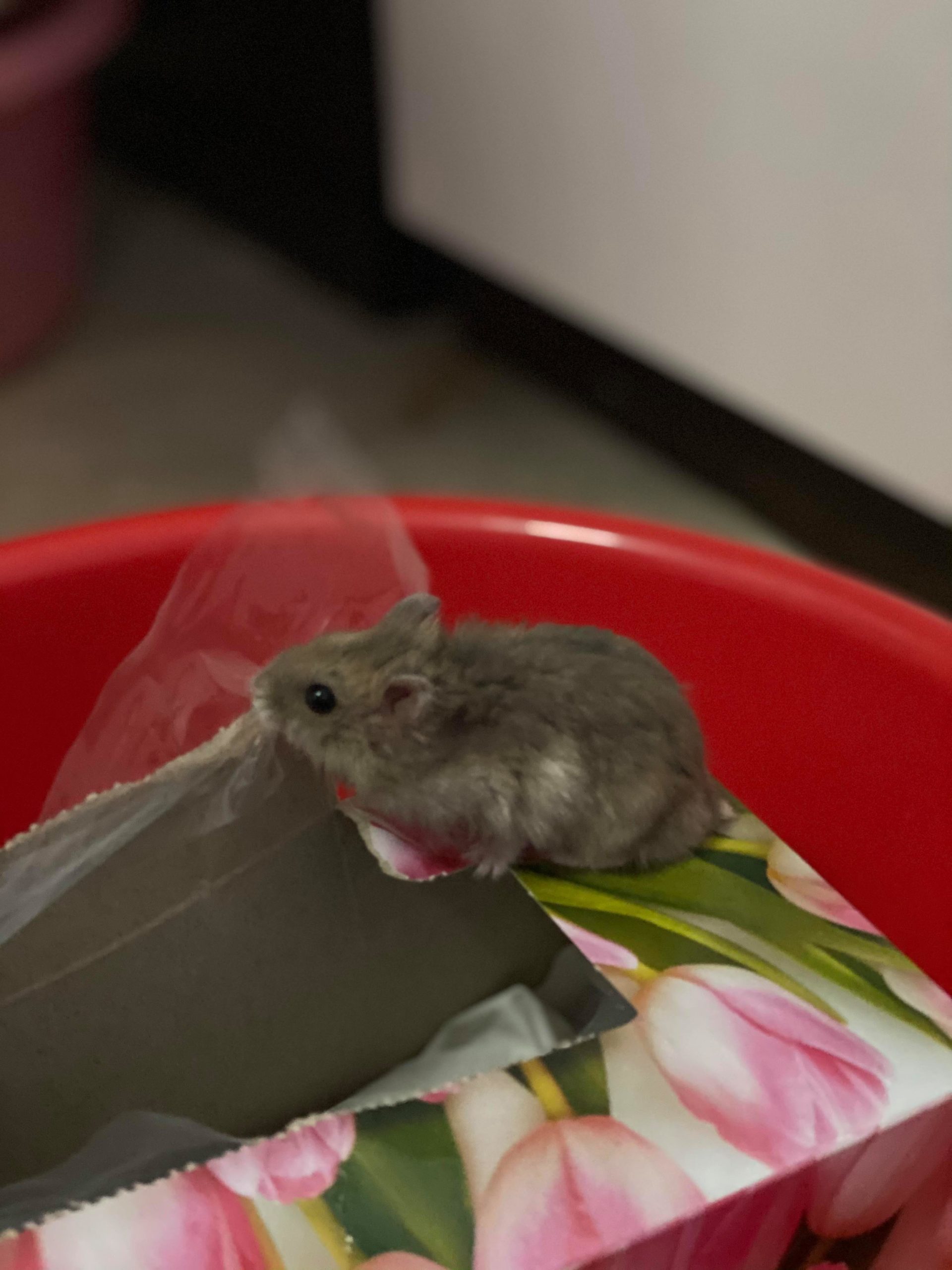 The next day (12 Oct), she updated that her cat ended up bringing home another hamster. 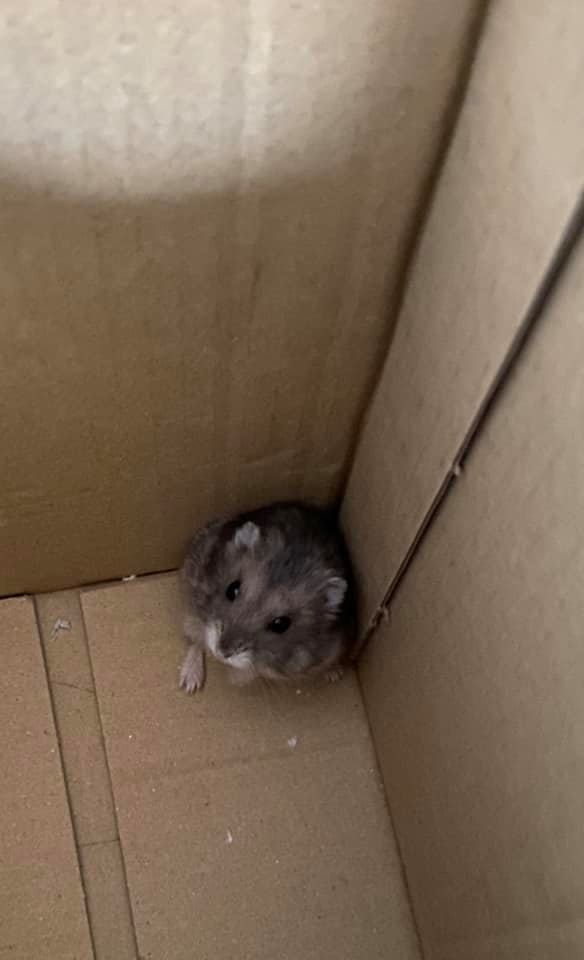 She jokingly said “halp” as she wondered what she should do to take care of the hamsters in the meantime.

Thankfully, the OP shared that the hamsters respond well when she calls and feeds them. She has also kept them away from Meow Meow as she still sees them as prey. 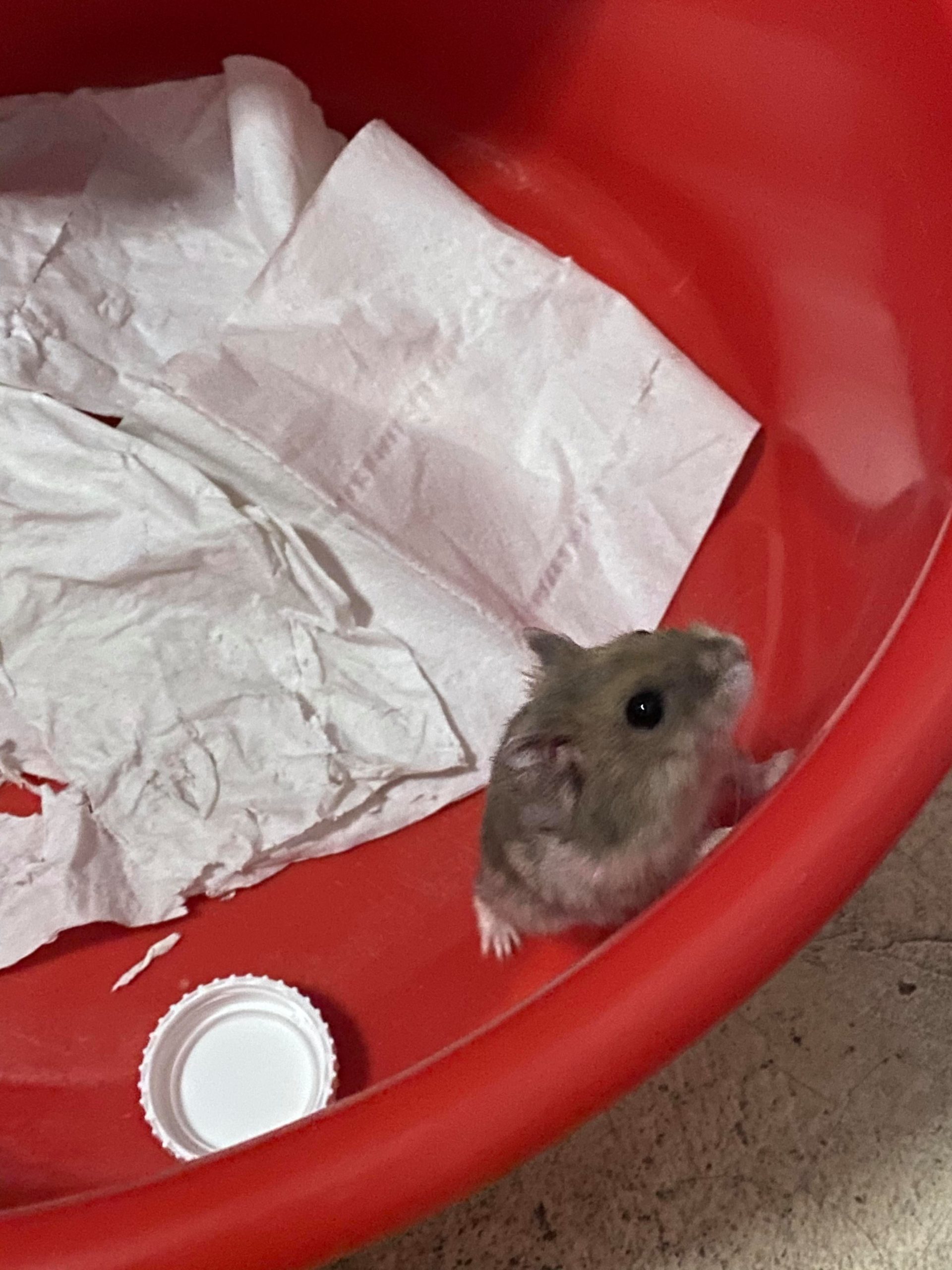 She also said that her cat has brought back dead lizards and birds before, but 2 live hamsters was on “another level”. 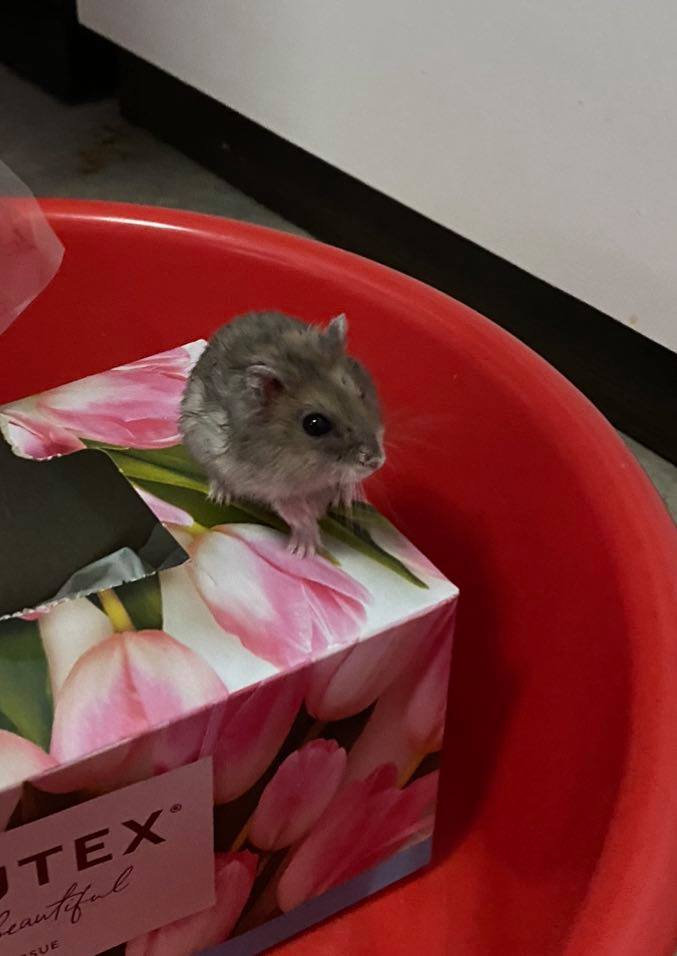 Since then, the OP said she has put up notices at her block in hopes of locating their owner. 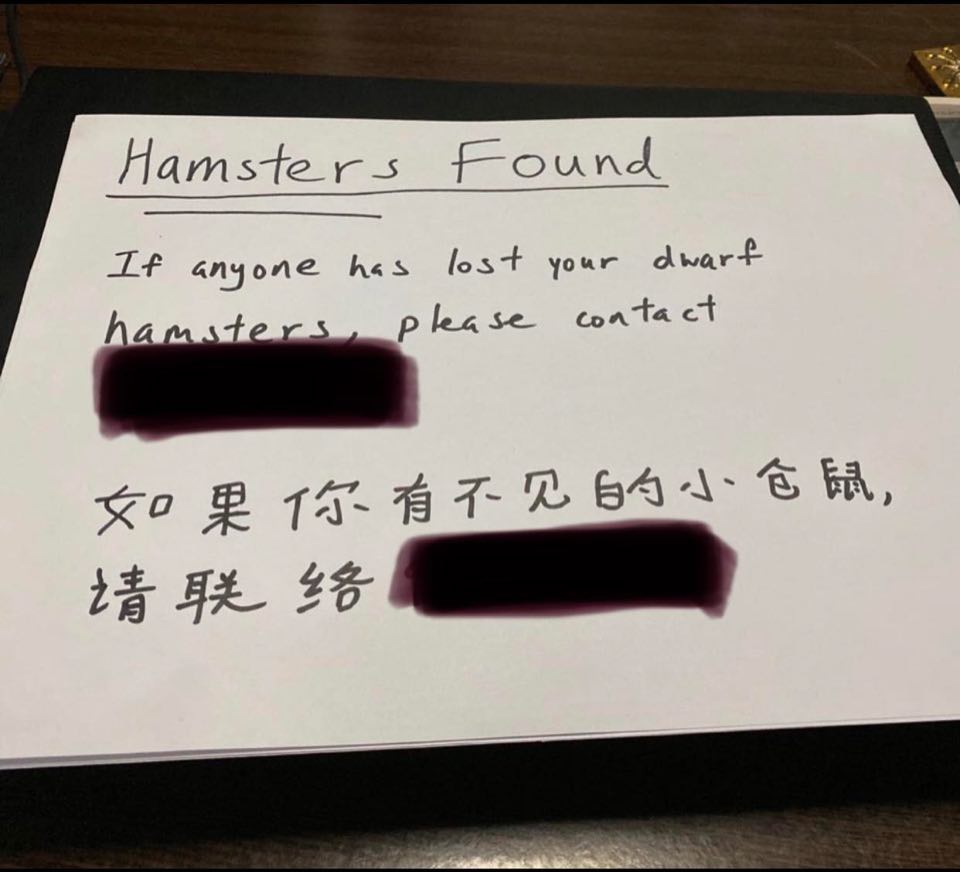 The woman told MS News that no one has come forward yet, and she worries that it is a case of pet abandonment.

She found it unlikely that 2 hamsters could go missing within the span of 2 days and the owner has not been searching for it.

Rescued Meow Meow when she was injured in cat fights

The OP told MS News how she first saw Meow Meow when she started sleeping on the door mat outside her flat in 2017.

She was injured, presumably from cat fights. The family took pity on Meow Meow and started giving her water and food.

After that, she started coming back regularly until one day, Meow Meow decided to “move into” the flat. She entered at her own will and started treating the flat as her home.

Initially the woman’s parents were against it, but they saw how the cat was a good tenant because she did not break anything. Since then, Meow Meow has become part of the family.

Perhaps bringing small gifts back like lizards, birds, and even hamsters is Meow Meow’s way of showing gratitude and love.

Rescue & adopt, pets are for life

This is indeed a peculiar story that warmed many hearts when it was posted on Facebook.

But going deeper, it paints the heartbreaking reality of community cats who have to fend for themselves in the open. We salute those who feed and take care of these cats out of their own time and pockets.

Buying or adopting a pet is also a lifelong responsibility. Animals should not be bought on a whim as these creatures will come to trust and depend on their owners.

We commend the woman and her family for rescuing Meow Meow and we hope she will be able to find the owner of the 2 poor hamsters soon.