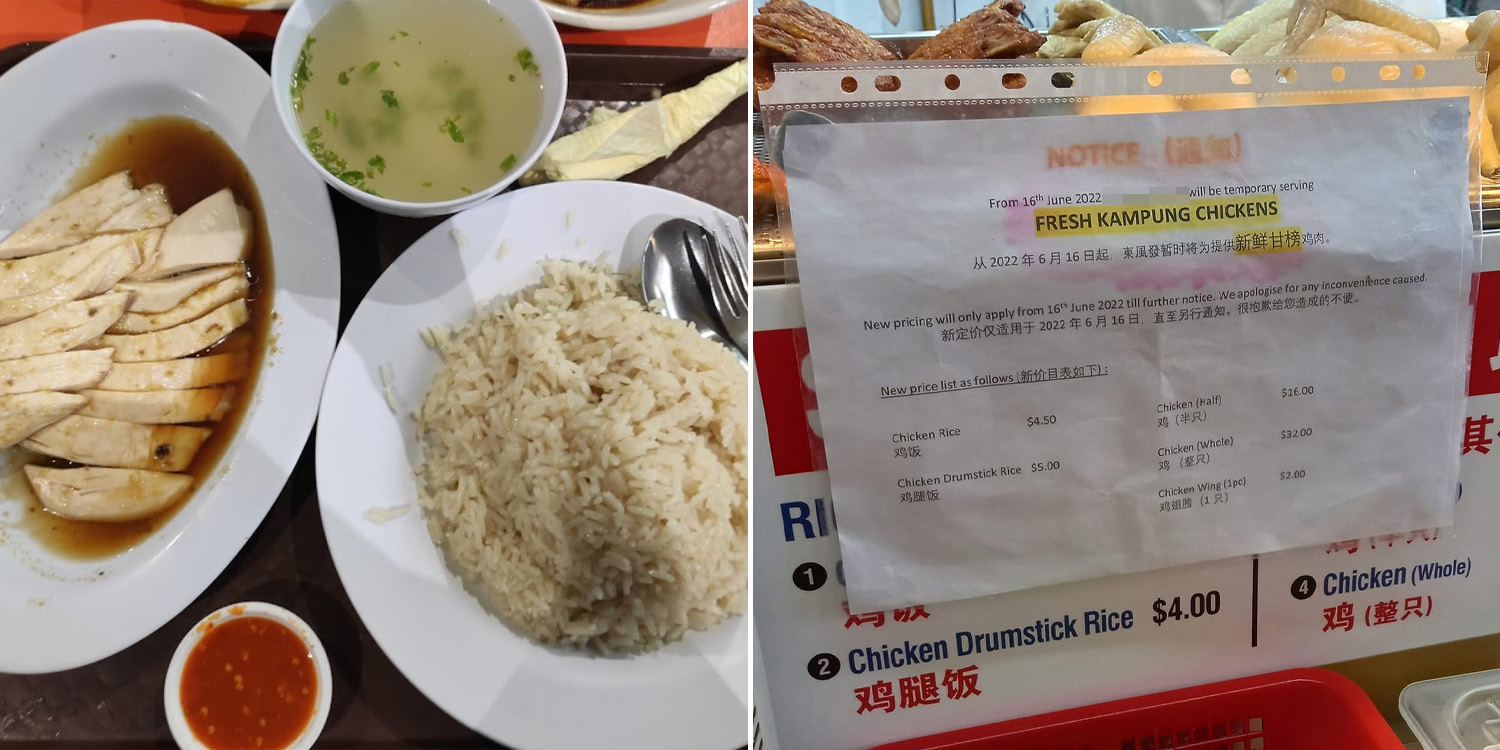 With the current economic state of our world, inflation has become a hot topic because it has far-reaching effects in every country. Customers and hawker stall owners have felt the crunch, going by numerous experiences posted online.

Even so, there is still a need for honesty when stall owners deal with customers, and vice versa.

A customer took to Facebook to complain about a certain chicken rice stall in Bedok. 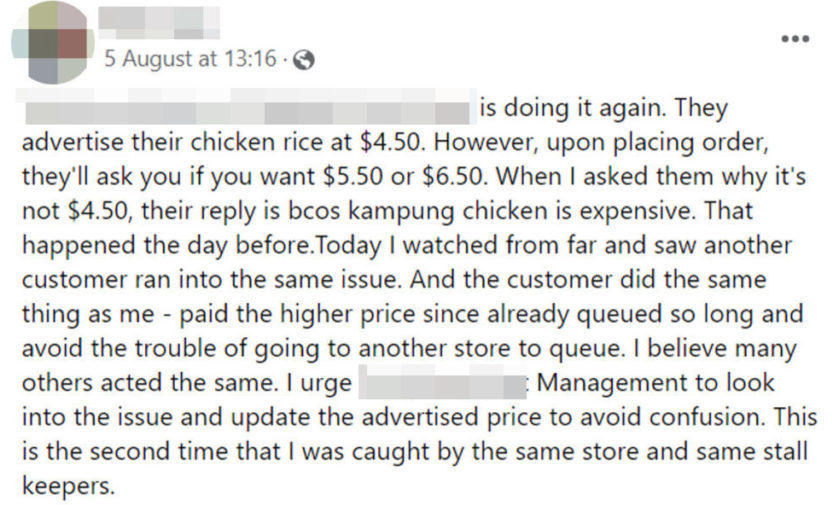 Other customers have also shared similar experiences of having to pay higher prices than advertised at the same stall.

In a post to Complaint Singapore on 5 Aug, a netizen detailed his grievances against a chicken rice stall in Bedok.

The stall allegedly advertised prices for their chicken rice at S$4.50. After the OP ordered a plate, however, the seller asked if he wanted it for S$5.50 or S$6.50.

When asked why it wasn’t at S$4.50, the seller said it was due to the high cost of kampung chicken. 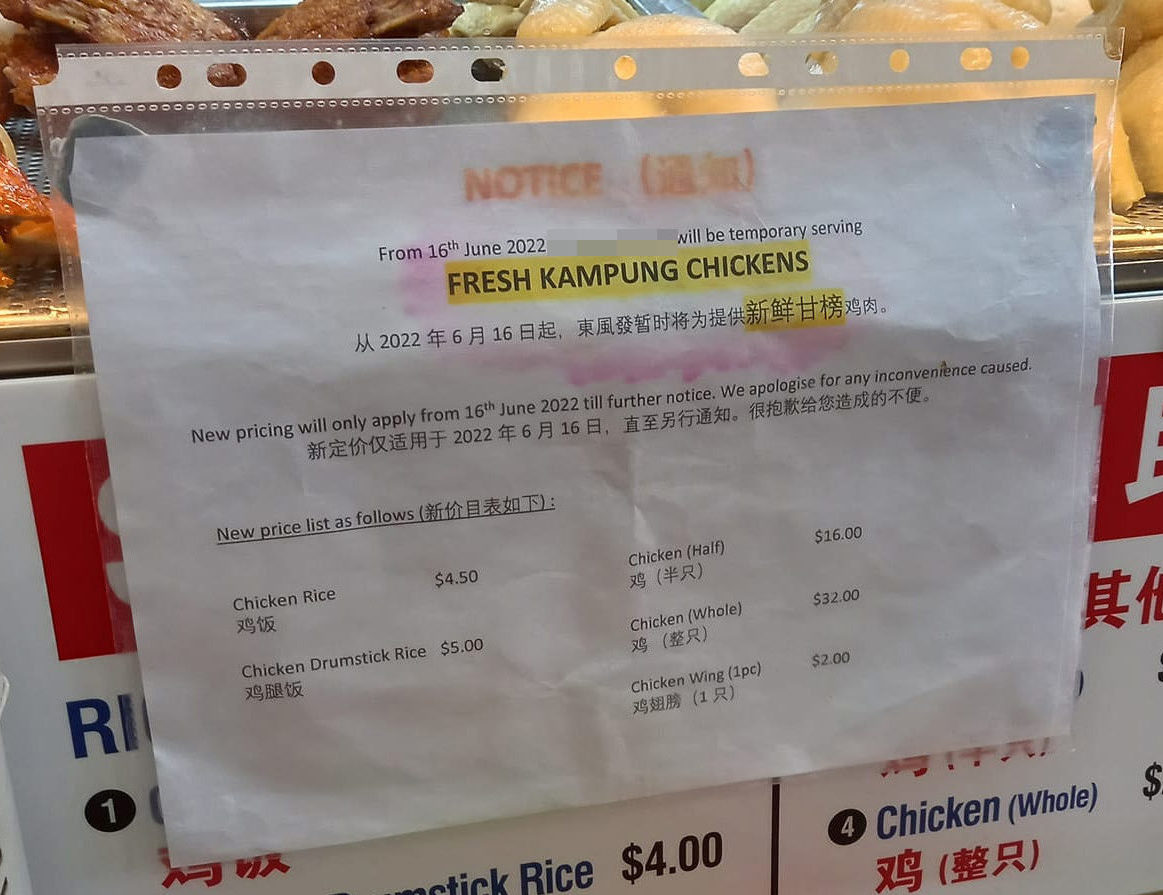 The OP said he went back the day after and noticed another customer faced with the same issue.

The customer similarly paid the higher price, having queued up for a long period of time.

The OP proceeded to urge management for the stall to investigate the issue and update the listed prices.

Unfortunately, the OP isn’t alone in his experience regarding that particular chicken rice stall. Quite a few customers have posted reviews expressing their discontent with the stall.

For one customer, they apaprently had to pay S$3.50 for a plate even though the listed price was S$2.50 at the time.

Not only that, but the service of the staff was also allegedly rather unpleasant, with another user urging customers to boycott the stall.

They additionally pointed out that other branches of the same eatery had similar issues, also asking customers to pay higher prices than initially advertised.

Economic conditions are understandably difficult right now, and hawker stall owners are justifiably struggling to cope in the aftermath.

Increasing prices is just one of the ways in which they are attempting to make ends meet. Perhaps, we can lend our empathy and understanding in accepting their situation as well.

However, it is unethical for these sellers to intentionally dupe customers by charging a different price from what they advertised.

Hopefully, the seller will come forward with an explanation for their practices.