UPDATE (23 Jul, 12.55pm): In a Facebook post on the incident, the Ministry of Manpower clarified that the worker had bought a plane ticket home on his own.

However, his employer was “not facilitative” of his return, and both parties didn’t discuss it, so there was a dispute.

The employer was advised to facilitate the worker’s return and complied, so he will leave Singapore today.

The Covid-19 outbreak in Singapore has cast a harsh spotlight on the living conditions of migrant workers in dormitories, with many having to be isolated as the virus spreads like wildfire among them.

Workers living at the S11 Dormitory @ Punggol, in particular, have been the worst hit, given that it became the biggest cluster in Singapore with more than 2,000 cases.

Though the Covid-19 situation is getting better in the dorms, it seems that migrant workers are still facing other problems.

Take this worker from China who was seen standing on a ledge on the top floor of a block in PPT Lodge 1B, a block of the S11 Dorm. 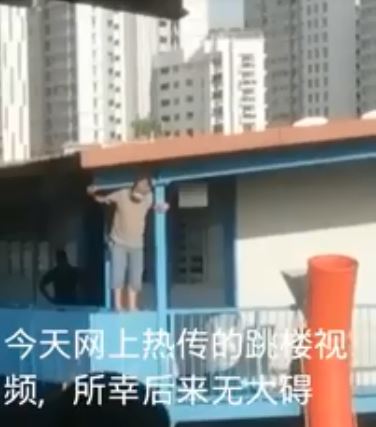 From videos shared of the incident, the man’s climbing onto the ledge caused quite a stir in the dorm.

Many workers can be seen congregating on the ground and the block opposite, and some were shouting out to him.

SCDF was called to the dorm

The Singapore Civil Defence Force (SCDF) was called to the S11 Dorm at about 5.20pm on Wednesday (22 Jul) afternoon, reported 8World News.

It proceeded to set up cushions on the ground in case the man jumped.

Thankfully, it didn’t have to perform further rescue operations.

That’s because the worker who was standing on the ledge was persuaded to come down, 8World understands.

Worker had dispute with company

Most people viewing the scene would think that the worker is threatening suicide.

Why would he feel desperate enough to do that?

According to 8World, the worker from China was rumoured to have had problems with his company.

Due to the dispute he had, he may have decided to take an extreme way out.

Here’s a video with a closer view:

Driven to the edge

We’re glad that the worker is physically alright now, however it’s still unknown whether the problems that literally drove him to the edge have been solved.

The incident serves as a reminder that many migrant workers’ lives in Singapore aren’t easy, and not just because of Covid-19.

So let’s try to appreciate these hardworking men who just want a better life, and have in turn contributed so much to Singapore.