Clement Puah Neo made a decision not to shelter his son Conrad, who loves to help people and has donated blood nearly 80 times.

Clement Puah Neo is someone who does not believe in sheltering one’s kids.

That’s the approach that the former Singapore Armed Forces (SAF) lieutenant colonel, 75, and his late wife took with their two sons, including 46-year-old Conrad, who has an intellectual disability. 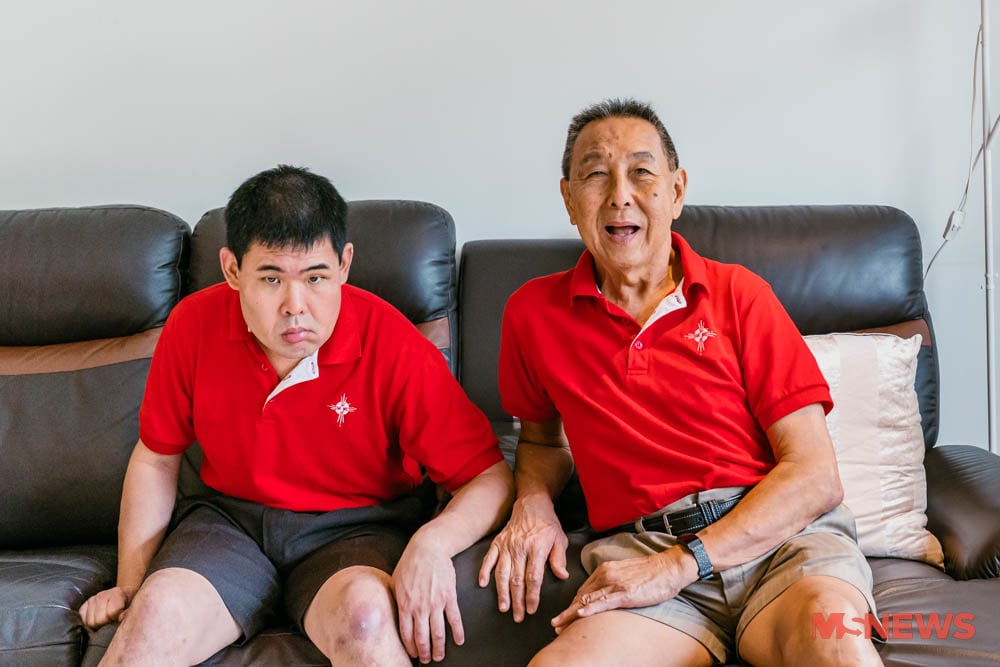 While most parents might understandably prefer to shield their special needs kids from the world, Conrad is lucky enough to have seen most of it, literally. Ever since he was a kid, he’s accompanied his folks on trips to every continent but one.

“We didn’t want to shelter him at home,” Mr Puah Neo tells MS News over the phone. “We wanted to make him aware that there’s a world around him and let him experience reality.”

Of course, there have been challenges, but he credits his three decades in the SAF with preparing him for that and something else — pure unconditional love.

On Father’s Day today (19 Jun), we share Mr Puah Neo’s inspiring story of being a single dad and how he nurtured his son into someone who not only has a place in society but actively gives back to it.

Conrad’s moderate intellectual disability, Mr Puah Neo explains, is the result of brain damage from a very high fever he had as a baby. He now has an IQ of about 60, and while he can’t read and write, he recognises numbers and speaks very well.

One of Mr Puah Neo’s biggest challenges is managing his son’s mood swings.

“When people ask me to describe Conrad, I say he is consistently inconsistent,” he chuckles. “In other words, he can be quite unpredictable, and his mood can change from very good to very bad. That’s what I need to manage as his caregiver.” Anything could spark a tantrum, from not liking the TV channel to having to wake up in the morning. But after years of “trial and error”, Mr Puah Neo has more or less figured out how to navigate things.

That said, he admits that it’s still “a work in progress” and that he still makes “mistakes”.

“I don’t have any ‘secrets’ to share with others because it depends on the person, and there’s no such thing as an approach that works for everybody,” he muses. “But there are certain principles, like checking back to see what could’ve triggered a misbehaviour or mood swing, then seeing how you can do better next time.”

Life in SAF prepared him for taking care of wife & son

Emotional outbursts aside, Conrad is also unable to perform most daily living activities without supervision. This includes simple things like taking a shower or changing his clothes. This can be frustrating to deal with, and Mr Puah Neo says it would be difficult to get through without one important ingredient — unconditional love.

He also adapted quickly to taking over his late wife Mona’s role as Conrad’s primary caregiver as Mr Puah Neo looked after both of them himself during the last six months of Mona’s life. She passed away in 2015 after a battle with cancer.

“When people ask me how I managed, I say that when you’ve been a soldier for 30 years, you would know how to do it,” laughs Mr Puah Neo, who retired from the SAF as a Lieutenant Colonel in 1996. “I credit my years with the SAF for preparing me for later life.”

He points out that this is why he believes women should also do National Service (NS) – a topic that has stirred up much debate – as they will learn the same thing as the men, which is to “handle contingencies”.

“Sometimes, we’re made to do ridiculous things under training, but there’s a purpose for that,” he says, adding that when one is equipped to handle unpredictability, then there will essentially be no nasty surprises.

Conrad, who has given blood almost 80 times, was inspired by his father

While there are struggles, Mr Puah Neo also has plenty of reasons to be proud of his son.

For starters, Conrad is a “blood donation champion”.

“If not for his positive Covid-19 test two weekends ago, he would’ve given his 80th donation,” Mr Puah Neo beams. That’s right. Eighty. 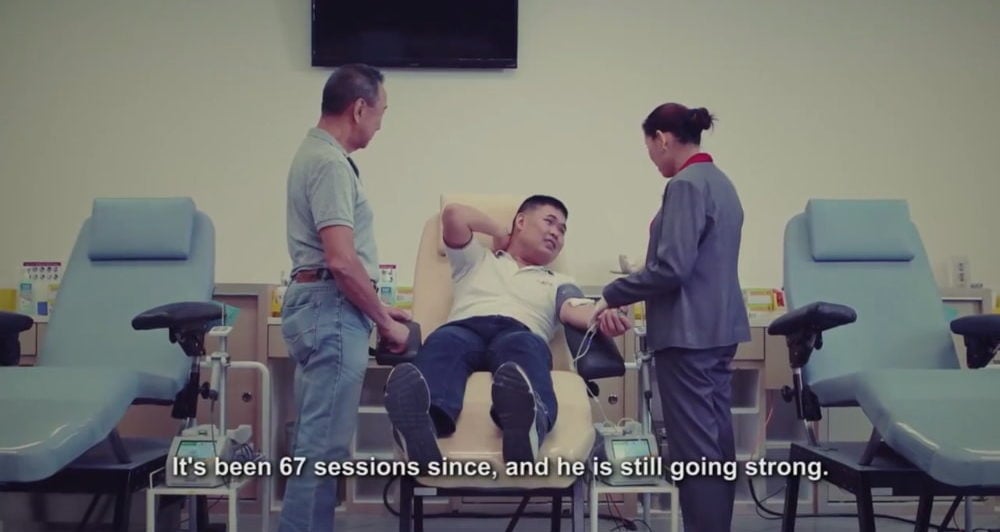 As a frequent donor himself, Mr Puah Neo would bring Conrad with him to every blood donation drive growing up. He did this as he and his wife wanted to expose Conrad to “normal” activities instead of hiding him at home.

This eventually piqued Conrad’s curiosity, and he asked his father why he was donating blood.

“I explained that I could save lives, and he said he also wants to save lives,” Mr Puah Neo recalls.

So, when Conrad turned 21, he donated blood for the first time. Just two or three weeks later, he started asking his dad when he could do it again.

“For persons with special needs, one of the biggest problems is self-esteem because people might say they are liabilities or aren’t contributors,” Mr Puah Neo explains.

But Conrad can say he has done something less than 0.1% of Singaporeans have done. Not many would have donated blood as many times as him.

Mr Puah Neo later adds that in recent times, Conrad has been donating funds from well-wishers to various charitable causes each time he gives blood. 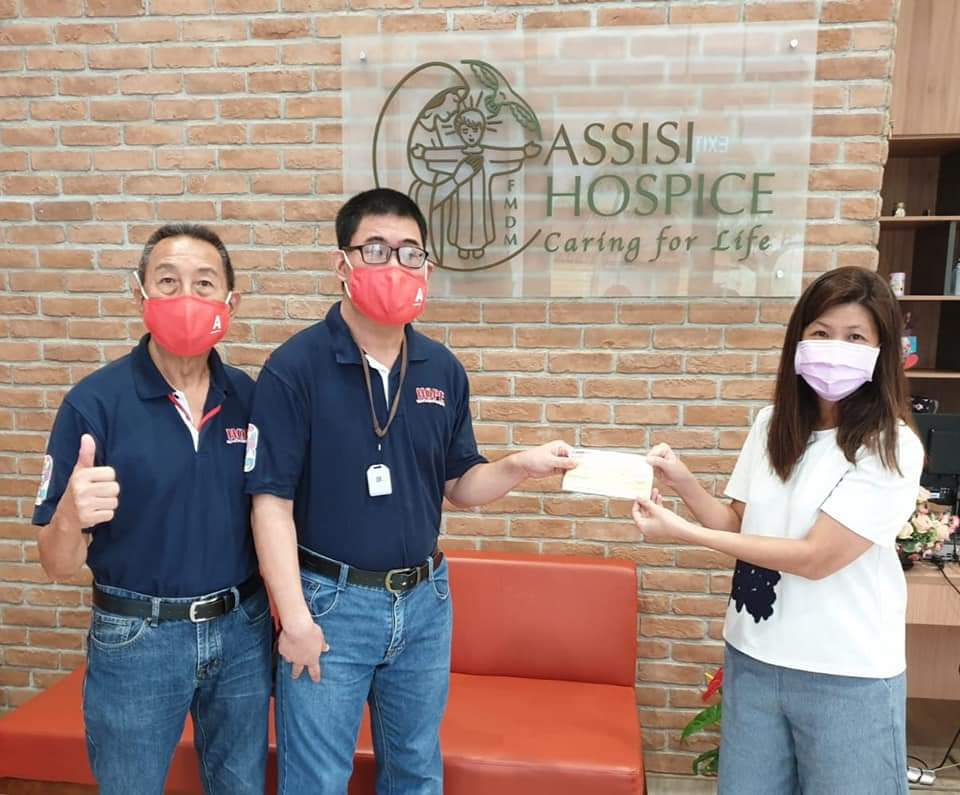 “The objective of the exercise is to create awareness that persons with special needs are more than just liabilities to the community.”

Father & son have travelled the world together

Thanks to Mr Puah Neo and his wife’s determination to give their son as normal an upbringing as possible, Conrad has had adventures all over the world that would make wanderlusters green with envy.

Together, the family has visited every continent on earth except South America. From going on an African safari to walking on glaciers in Alaska, Conrad’s ticked off a pretty impressive bucket list. Before the pandemic, they also used to go on cruises four times a year.

Some trips came with unexpected extra drama. Mr Puah Neo told us about the time they were resting during a layover in Toronto airport when Conrad, then about 12 or 13 years old, triggered the fire alarm.

“We were so angry with him, but the airport officers came to cool us down,” Mr Puah Neo laughs, adding that the staff were understanding about Conrad’s condition.

Conrad has also gotten lost or separated from his parents numerous times, but things always turned out well thanks to his good “survival instincts”.

Preparing Conrad for the future

Since April 2019, Conrad has been living at TOUCH Ubi Hostel, a stay-in residential programme for adults with mild intellectual disabilities like himself. He goes home to stay with his dad on the weekends. 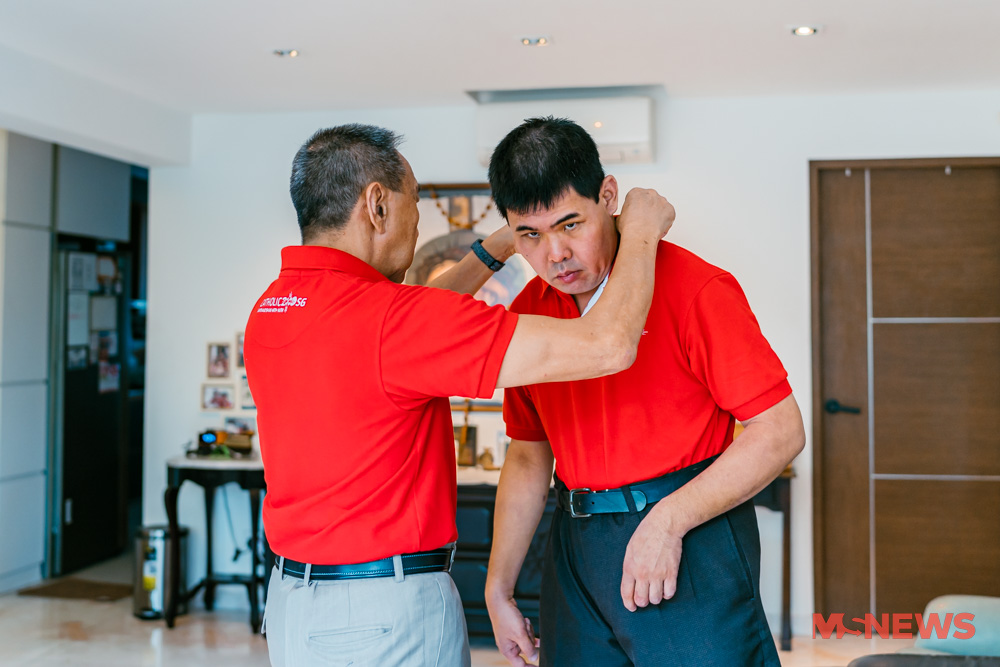 At first, Mr Puah Neo and his wife had their reservations about sending Conrad off to live at a hostel instead of at home with them due to their “traditional Asian values”.

However, he changed his mind after his wife died. “For the first two years, the trauma of losing his loving mother and primary caregiver was too big for Conrad to handle, and that’s when he became rebellious.”

It made Mr Puah Neo realise that he needed to prepare Conrad for the eventuality that he might not be able to care for him one day.

So now, he’s in a transition where he can stay with me while also getting to understand how to live in a community. 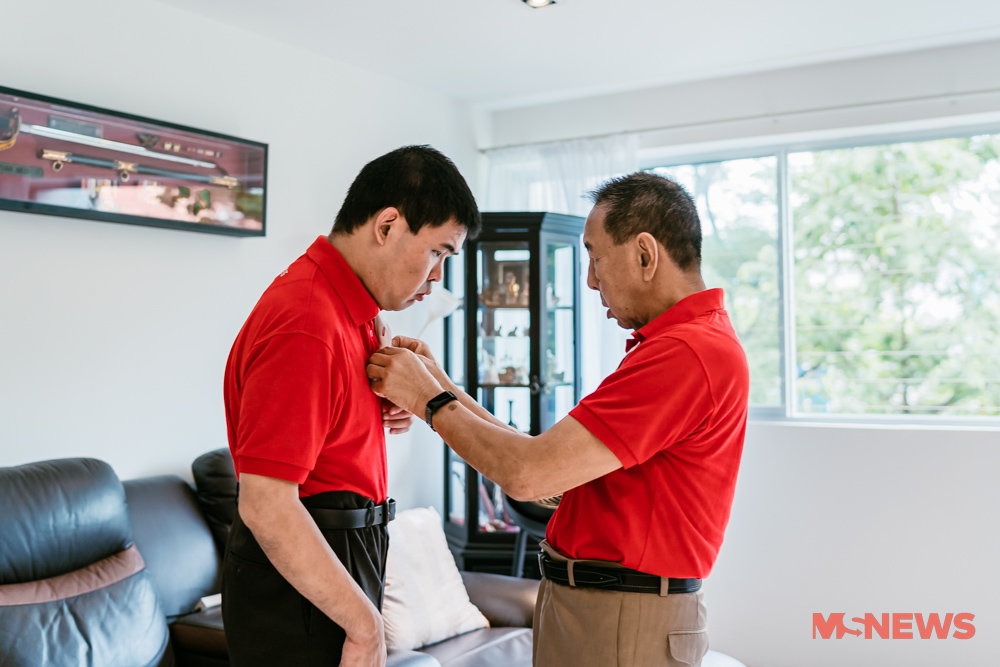 This arrangement allows Mr Puah Neo to go on with his own life. It also helps that he sometimes involves Conrad in his own activities, including some official SAF functions.

“Thankfully, I haven’t had to give up a lot of things because my friends and communities have all been very welcoming to Conrad, and that’s something I’m very grateful for,” he says.

Being a parent can be tough, but things seem to be on a whole new level with a special needs child.

Perhaps Mr Puah Neo’s story can inspire other caregivers of special needs individuals, and reassure them that it is indeed possible to help someone rise above their disabilities and live a good life while also helping others in need.

He’ll just humbly brush off any praise, though.

“Sometimes, people tell me that I’m doing a good job, but I always say that it’s a work in progress, even after so many years,” Mr Puah Neo modestly states. “That’s why I used the phrase ‘consistently inconsistent’ to describe my relationship with Conrad. There’s never a dull moment!”

MS News wishes Mr Puah Neo and all other fathers, fathers-to-be, and father figures out there a very Happy Father’s Day.