David Bowie was no stranger to our island

By now, you should already have heard about David Bowie’s demise.

The rock and roll icon succumbed to cancer after an 18-month battle and passed on two days after his 69th birthday.

In 1983, as part of David Bowie’s Southeast Asian tour, the rock legend descended upon our city-state and even chronicled his adventures into a documentary named Ricochet.

What could a music icon possibly be up to on our sunny island?

We retraced his footsteps and found out 10 things David Bowie did in Singapore: 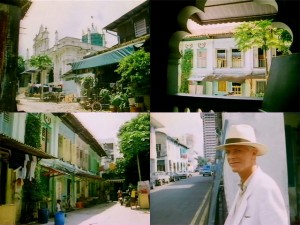 Being a tourist, Bowie had to visit a place full of local flavour – Little India. There, Bowie came across places of religious interest, like the Indian Muslim Mosque named Abdul Gafoor Mosque.

2. Had his fortune told at Sakya Muni Buddha Gaya Temple

Bowie stood in front of the 15-metre tall Buddha statue, seemingly impressed by it. We’re pretty sure Bowie didn’t know much about the 12 zodiac signs, but went to try out the ‘Wheel of Fortune’ anyway.

3. Conversed with a taxi driver

Bowie boarded a taxi, and had a discussion with an outspoken Indian driver about the chewing gum ban and drug offences in Singapore. Bowie also sounded slightly taken aback that drug offenders would be sentenced to death by being hung.

4. Stayed in an Emperor Suite at Ming Court Hotel 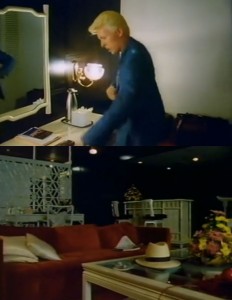 Ming Court Hotel is also today’s Orchard Parade Hotel, after it was renamed in 1991. Situated along Tanglin Road, Bowie would head back to his place of lodging after a day of adventures.

On his stay there, Bowie recounted:

When I move into my suite at the Ming Court Hotel, the little Malay porter indicates the three-tone carpet, the ten-channel T.V. He is bursting with pride about the bathrooms but is visually awed by the three hundred square feet of personal freedom. He paces the room from wall to wall. “So much space,” he sighs.

Back then, Far East Plaza was Singapore’s newest and largest shopping mall. Naturally, Bowie had to check the place out. But not for shopping, of course. More in the next point.

6. Rode escalators and got scolded by a security guard 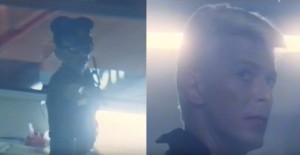 Why shop when you can ride the escalators?

That’s exactly what Bowie thought, but a security guard probably got pissed off and gave the rock star a piece of his mind.

7. Headed to somewhere without skyscrapers

The next day, Bowie got onto another cab and asked the driver,  “Can we go somewhere, like, where there are no skyscrapers?”.

The cabbie gave him a choice between the “old building” or the “new building”, and Bowie chose the former. He was driven to Raffles Hotel. There, Bowie wandered around the faux-colonial compounds, but was affected by the construction noises next door — the Raffles City shopping mall and hotel were under construction then. 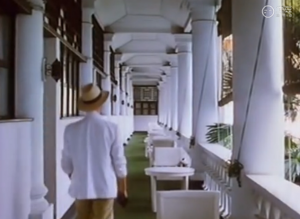 8. Held his first concert in Singapore 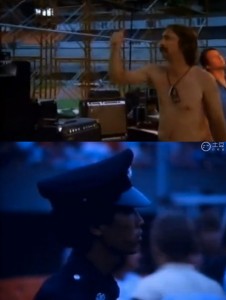 Bowie’s first concert here was held at the former National Stadium, but his performance did not go well.

I rip through a welcome and an introduction to the band in Chinese. It is received with dutiful sympathy by the crowd as my pronunciation is so dreadful that not one word is understood. The audience end of the ramp is so far away from the band that I singing half a beat behind them. I look back and see a tiny, jumping Carlos Alomar leading a badly lit rock’n’roll group. I peer out and see paramilitary cops at the ratio of about one to two with the first row. They finger their billy clubs, their hands on their guns.

My jacket style is designer Tokyo — skyscrapers and diamante searchlights. There is so much lacquer in my hair that a hurricane couldn’t move it. My shirt is held into my pants by elastic thongs round my legs. I have two pairs of socks on because of oversized shoes. I am imploring the crowd, “put on your red shoes” … there is a scream of recognition — 15,000 strong. A tiger-print-clad girl is slapped back over the security boundary by a ferocious swing of a billy club.

In a city where you can be arrested for chewing gum, a demand to put on red shoes is deemed unhealthy. 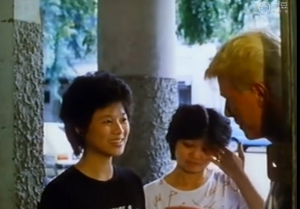 At Chinatown, Bowie stumbled on a building where a Chinese Opera troupe was rehearsing. He met Theresa and Tsiu-Lien, who were on their way to the rehearsal, and asked if he could watch them practise. Unfortunately, their “boss” denied his access.

Nonetheless, Bowie still attended Theresa and Tsiu-Lien’s “wayang” show that night after his own show. He was immersed in the local culture, fascinated by the wayang show.

Scenes of Bowie performing his song Heroes are interspersed with scenes from the Chinese opera:

Singaporeans will always remember this legend

Singapore was probably a place Bowie held close to his heart, with her being heavily featured in his documentary. In 2004, the British rocker returned and performed a two-hour set at the Singapore Indoor Stadium.

The world will be mourning over his loss, but he will be survived by his legacy.

Featured image via Tudou
With reference to The Straits Times, SG Film Hunter, This Recording, Sporeana