E-Cigarettes And Vaping Will Be Illegal In 2018

Come 2018, it’s going to be completely illegal to use e-cigarettes even at home. 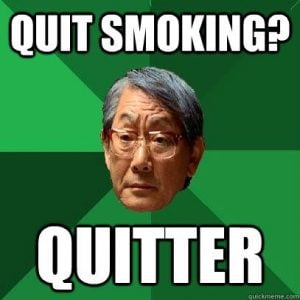 Currently, just like our infamous chewing gum ban, only the sale, import and distribution of e-cigarettes are against the law.

Personal consumption of e-cigarettes however, is not subject to any penalties.

This is all slated to change when a law which was passed in November last year, comes into full force in the next few months.

Once the ban is enforced, purchasing, using and owning “imitation tobacco products” like e-cigarettes will be strictly illegal.

Following a dramatic parliamentary debate back in November, it was decided that “imitation tobacco products” should be banned completely.

The Health and Science Authority (HSA) defines this as any product that has the following traits:

Unfortunately, this definition also seems quite vague. This means HSA may apply it – at their discretion – on any products which mimic or resemble smoking.

Anyone who breaks this law will face a fine of up to $10,000, a maximum of 6 months imprisonment, or both.

Here’s why our government seems set on setting such harsh penalties for e-cigarettes.

E-cigarettes are ‘gateway products’ to get you addicted to nicotine

Stricter regulations could prevent this ‘gateway nicotine product’ from being widely used by youth, helping to de-normalise the use of tobacco products over time.

The Health Ministry added that the complete ban on e-cigarettes will “send a strong message to young people to stay away from cigarettes”.

Also, unlike regular cigarettes, it’s hard to keep count of the nicotine content in e-cigarettes as refills are used.

As a result, young users risk consuming higher amounts of nicotine, without even knowing it.

So why do millennials in particular find vaping with e-cigarettes so attractive?

Vaping gaining steam around the world

A lot of self-professed vapers, pick up vaping due to viral videos of millennials doing cool smoke tricks like blowing tornadoes and rings.

Vapes and refills can be purchased online easily and delivered to your doorstep, without anyone around you even finding out.

Of course, this is the situation overseas and definitely not in Singapore.

Some Singaporean smokers say that although they enjoy the different flavours, it’s too hard to find the refills in Singapore.

Others who’ve tried vaping suggested that the aftertaste was too dry and not palatable.

When quizzed about the new ban, these regular smokers simply said that they would switch back to traditional cigarettes.

This chillax attitude towards the ban, however, is probably not the response our Health Ministry was expecting.

Are there possibly any positives to e-cigarettes that we may be forgetting to mention? Technically, yes.

Cleanliness is one of many reasons quoted by many e-cigarette supporters.

With e-cigarettes, there’s no worry of butts littering the floor and taking away from Singapore’s cleanliness.

Environmental impacts of vaping should be considered too.

Second-hand vape smoke is way less harmful than regular smoke. Smokers of e-cigarettes could thus be less of a public nuisance to those around them.

But taking away the option of legally smoking e-cigarettes may instead give rise to an illegal industry.

Rather than banning it altogether, perhaps more can be done to educate the youth on the detrimental affects of vaping.

It’s a common misconception that e-cigarettes are a safer alternative to normal cigarettes after all. 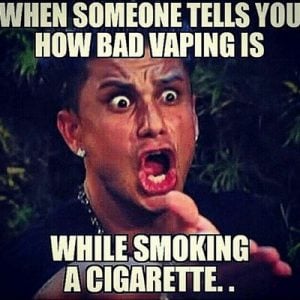 Instead of outlawing it, people who wish to consume them should be free to do so in private spaces.

As long as public rules and other people’s boundaries are respected, of course.

Most importantly, smokers who are of age, should really be allowed to make that decision for themselves.