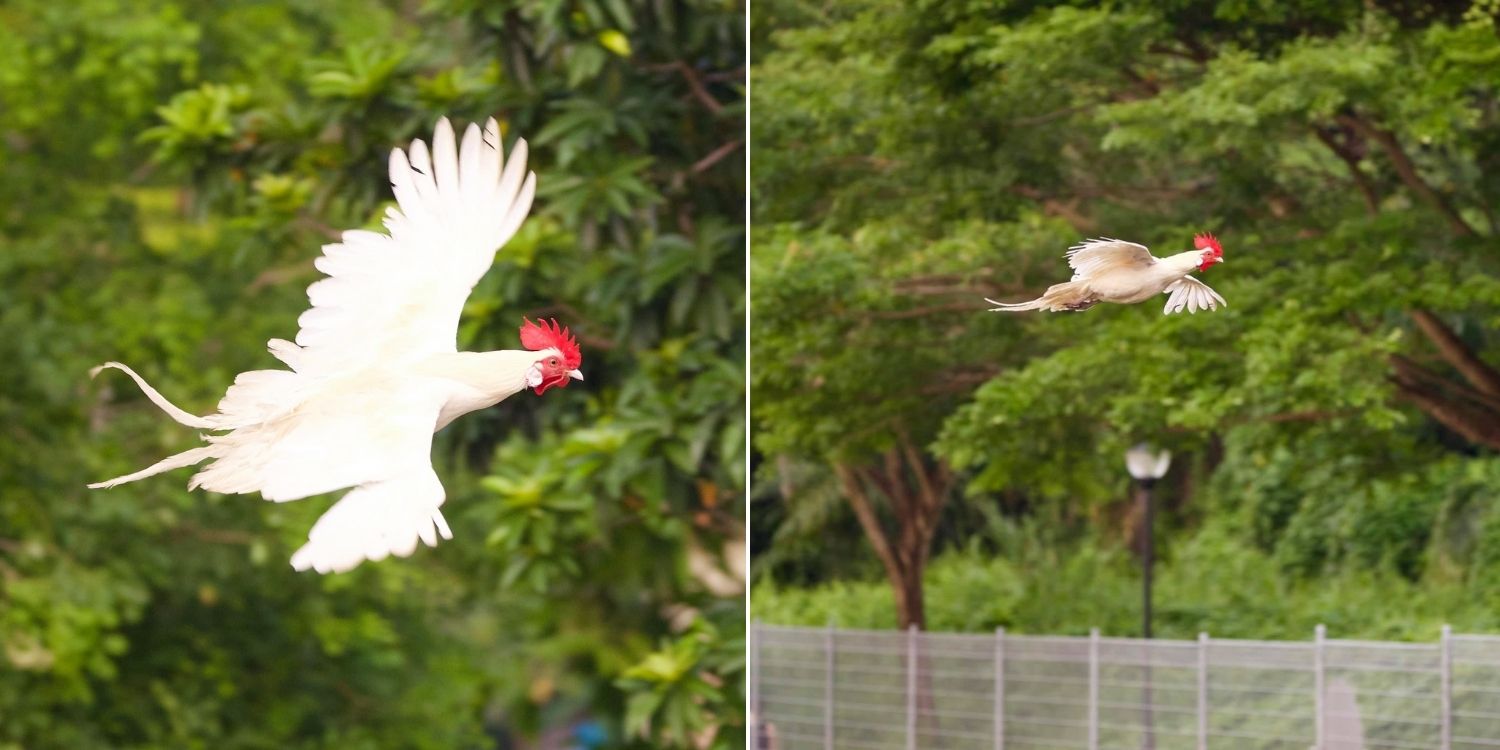 When we think of chickens, images of earthbound birds come to mind. These grounded birds are usually raised for poultry and in some rare cases, as a hobby.

While we do know that they can fly, you’d rarely ever see one do so.

Luckily, Mr Adrian Tan photographed a rare sight of a rooster flying across a river in Pasir Ris. 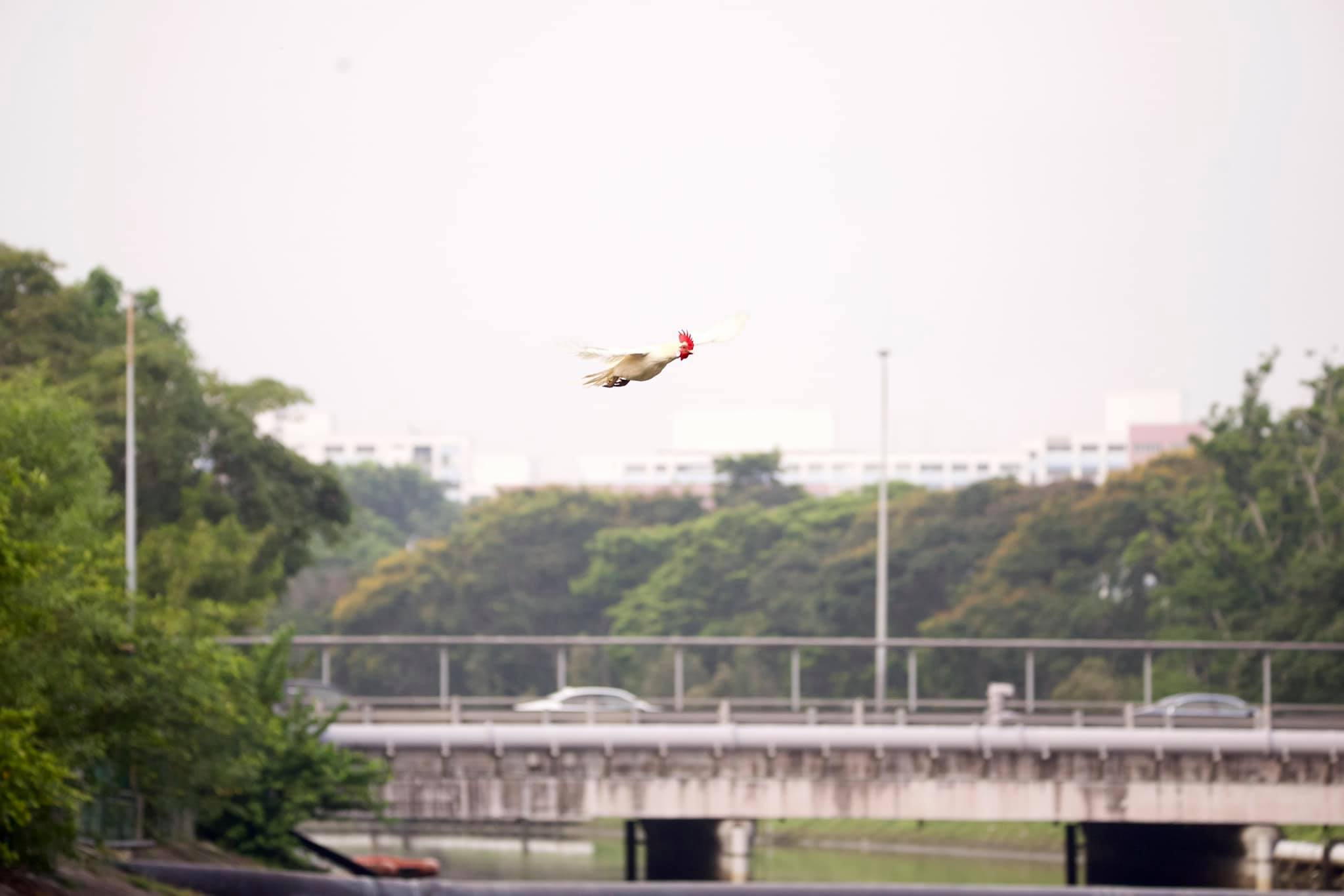 The rooster can be seen soaring through the sky, with its wings fully extended, in majestic flight.

On Wednesday (16 Jun), Mr Tan posted pictures of a chicken flying across a river in Pasir Ris on the Wildlife @ Pasir Ris & vicinity Facebook page. 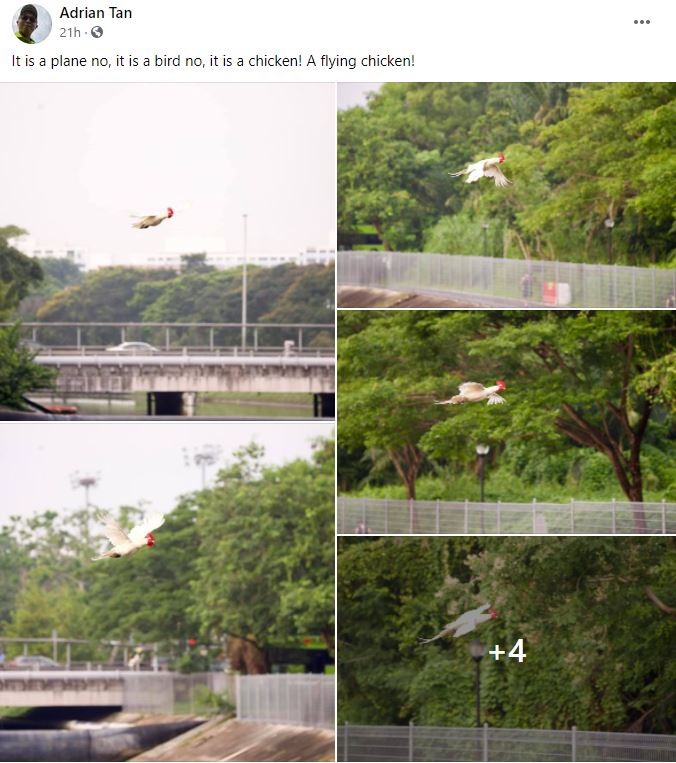 The pictures show the chicken flapping its wings as it flies across the river. 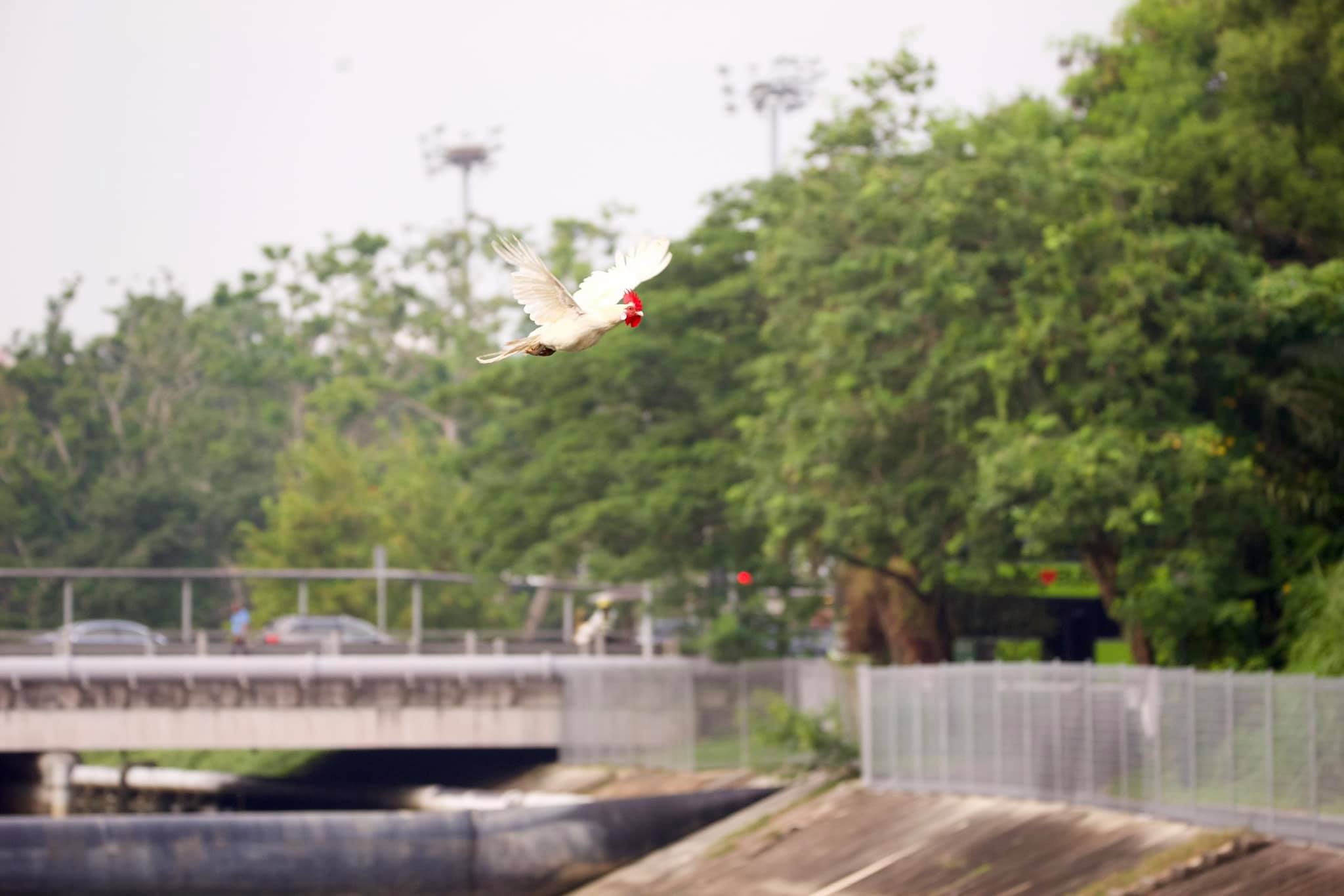 According to chicken keepers,  certain breeds of chicken are capable of flight.

Chickens would usually take flight to run away from predators or to quell their curiosity. 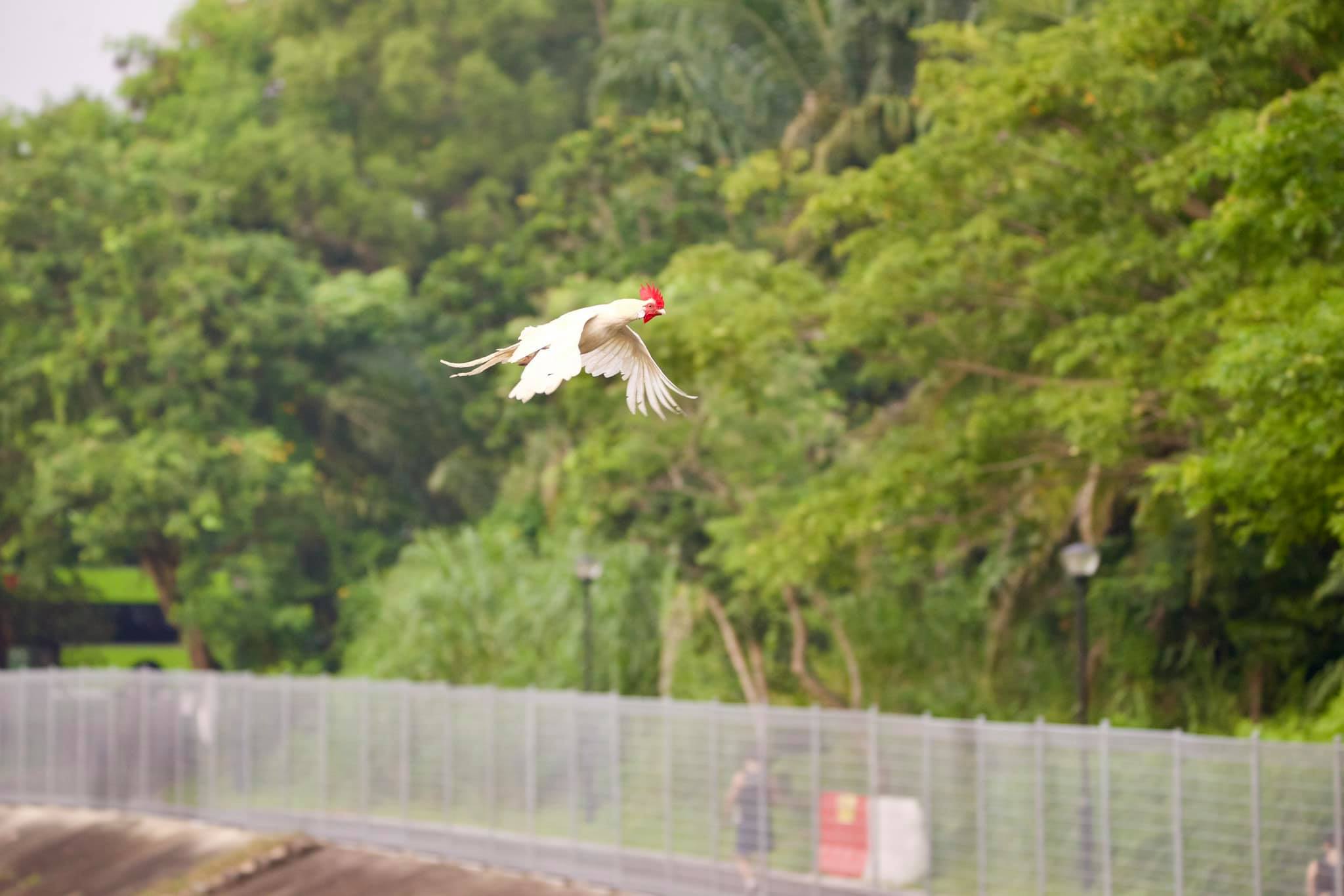 Hopefully, this is the latter case for this white rooster who seemed rather at ease as it majestically flew across the river. 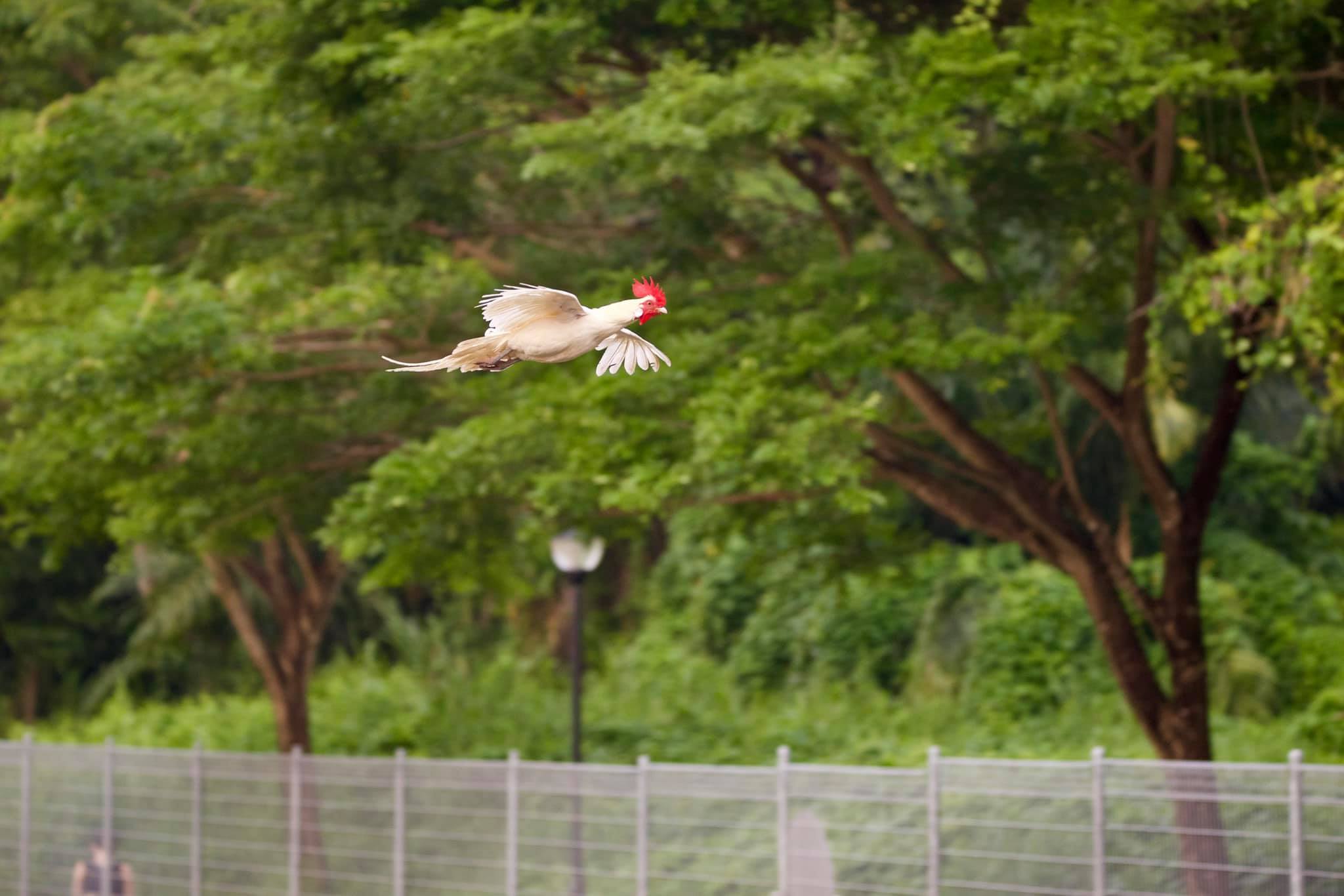 While the consensus remains that chickens can fly, seeing one actually take flight in this manner is completely new to some.

One netizen couldn’t hide his amazement as he exclaimed that this was the first time he had seen a chicken fly.

Another bird-spotter meanwhile seemed familiar with the phenomenon, as he had apparently been trying to capture similar snapshots.

In an attempt to finally answer a question as old as time, one comment implied that the chicken got tired of crossing roads and flew across one instead.

Lucky photographer is new to the hobby

Speaking with MS News, Mr Tan said that ever since work from home (WFH) became the norm, he had developed an interest in photography and would take his DSLR on his morning walks around Pasir Ris Park.

As a Pasir Ris resident, his interest came from the infamous spotted wood owl that was all the craze when it appeared in Pasir Ris Park.

Seeing as he was living in the hotbed of all things flying, he set up his camera to capture creatures in flight and was waiting for a subject to appear.

As he recounted, on one weekday morning, he saw a big bird in the distance and started shooting away.

Only when he got around to seeing the photos again that he realised it was a white chicken, an allegedly common sight in Pasir Ris Park.

We’re sure that he saw the funny side of it as well and shared the pictures for everyone to have a good laugh.

Grateful to see more of wildlife in Singapore

While the pandemic has changed the way we live, more and more cases of wildlife sightings have emerged.

One after another, we are learning more about what lies beyond the concrete jungles of Singapore. In this case, the fact that chickens do fly and majestically at that.

Kudos to Mr Tan for capturing the rare moment and bringing a smile on our faces.