We can all learn from his extraordinary work ethic.

With their unparalleled convenience and variety, food delivery services like foodpanda are popular dining options for busy Singaporeans.

Yet very often, little thought is spared for delivery personnel who work day in and out dispatching meals from door to door. 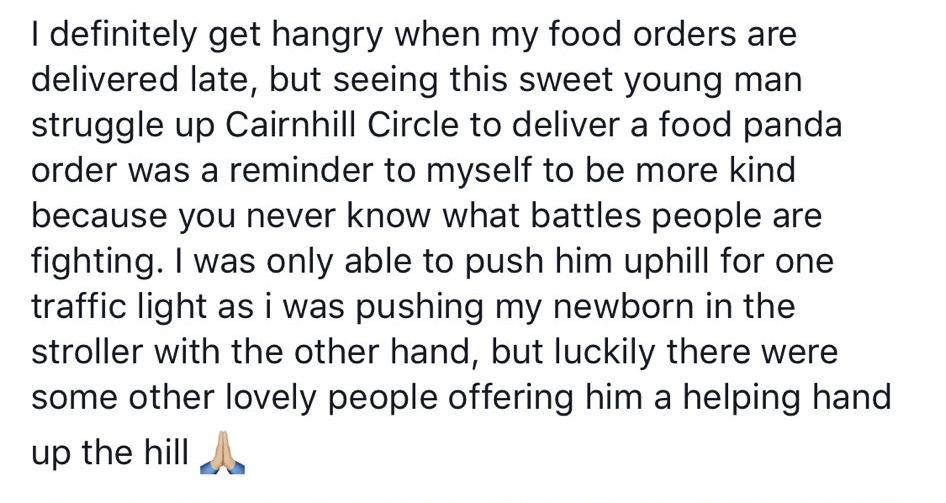 Attached to the tweet was a picture of a wheelchair-bound food delivery man seen at Cairnhill Circle. According to the Facebook post, the foodpanda delivery man was seen at Cairnhill Circle completing a delivery order.

Attached to his wheelchair was foodpanda’s signature pink and grey delivery bag.

Given his disability, the delivery man allegedly faced difficulties travelling up the elevated terrain.

Sensing his struggles, the Facebook user helped to push him up but was only able to do so for the length of “one traffic light’, as she was accompanied by her newborn baby.

In retrospect, the encounter reminded the Facebook user to be kind to those around as we never know the difficulties each one of us may be facing.

Just last week, an image of another wheelchair-bound food delivery man made rounds on social media. The picture clearly inspired many Singaporeans and has gone viral with over 8,100 shares at the time of writing.

While we may not be aware of their backstories, all of us can surely learn a thing a two from their determination and grit.