Slow down if you're driving here.

When driving along routes that we are familiar with, some of us might be guilty of letting our instinct take over. In such situations, even the slightest changes to the road layout can catch us by surprise.

That was seemingly the case along Portsdown Road in One-North, where an unmarked speed hump was recently installed. 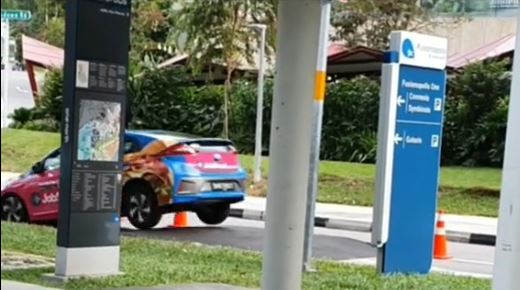 Perhaps due to the hump’s stealthy appearance, many drivers were not aware of its existence until moments before crossing it.

In a now-viral video, faster vehicles were seen ‘flying’ across the hump while some drivers managed to jam on their brakes in time.

In a TikTok video apparently taken on Thursday (24 Nov) morning, a user shared drivers’ ‘reactions’ to the new speed hump along Portsdown Road.

The hump appeared unmarked and blended in well with other sections of the road.

The first few vehicles featured in the video approached the hump carefully and in an uneventful manner.

However, a ComfortDelgro (CDG) cab that came straight after approached the hump at a relatively quick pace and ended up ‘flying’ across the obstacle with significant airtime.

In contrast to the first blue cab, the driver of another CDG taxi jammed on the brakes just as they approached the hump. While it did not end up in the air, we can’t say that passengers in the cab – if any – did not get a nasty shock.

Of all the vehicles that crossed the hump, this white car appeared to have spent the most time in the air. It also landed with an audible thud further down the road.

Jokes aside, we hope nobody sustained injuries as a result of the unmarked speed hump.

A satisfying watch for many netizens

The post has since gained significant traction on TikTok, with over 350,000 views at the time of writing.

Interestingly, many people pointed out that the video was satisfying to watch.

Another netizen couldn’t help but casually insert a pun.

Meanwhile, others pointed out how dangerous the hump can be since it’s of a similar shade to the rest of the road.

Should a speeding motorist fail to see it and slow down in time, they could very likely end up in an accident.

MS News has reached out to the relevant authority for comments and will update this article accordingly when they get back.

Reminder for drivers to be vigilant on the road

Though it’s certainly not ideal for the hump to be without any markings, we hope this video serves as a reminder for motorists to be vigilant at all times.

We hope nobody was injured as a result of the ‘well-camouflaged’ hump and that the relevant authorities will soon work on making it more noticeable.

In the meantime, if you happen to be driving in the area anytime soon, do keep a lookout for the hump and remember to drive safely.