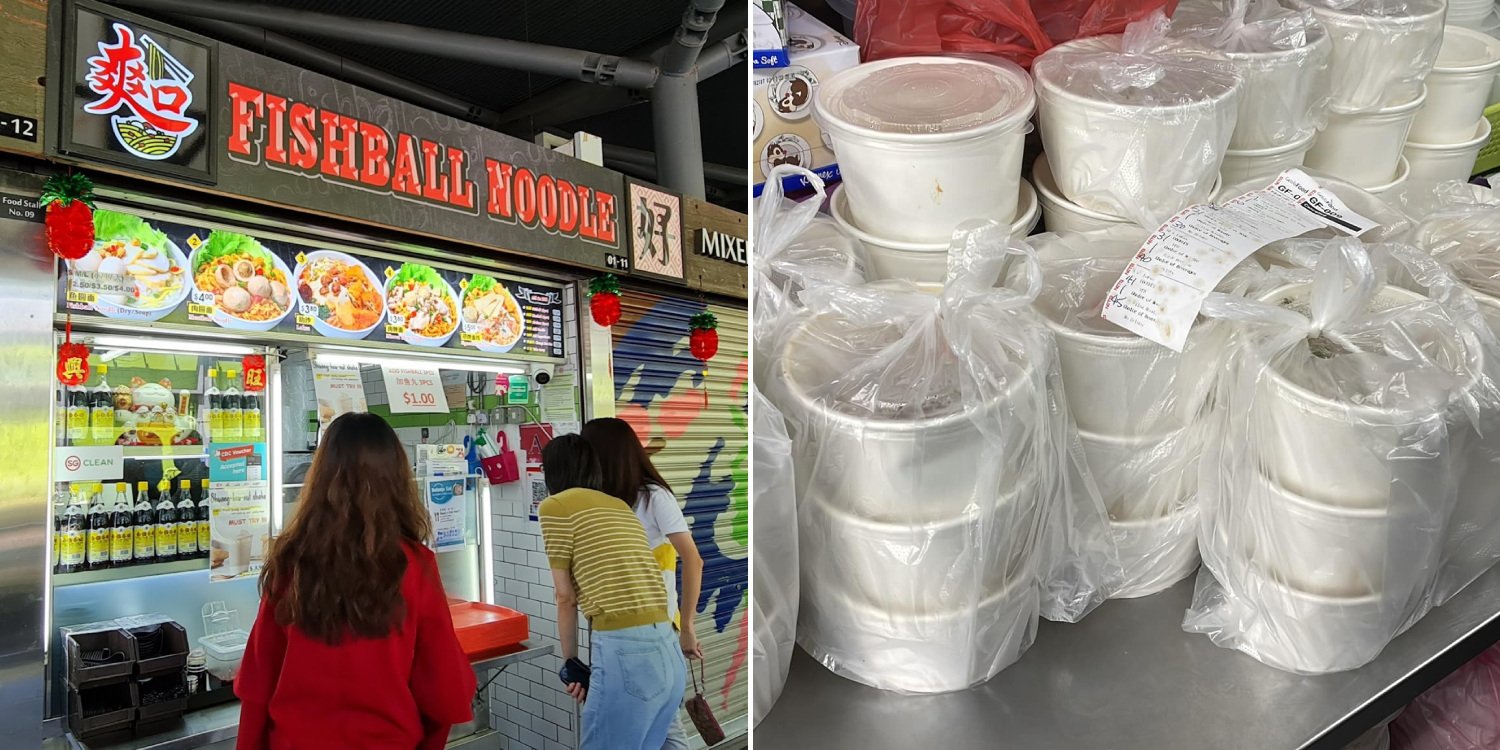 The customer apparently thought the hawker stall was taking too long.

GrabFood Customer Cancels Order For 45 Bowls Of Noodles, Hawker Gives Them Away For Free

When making a very large order on a food delivery app, it only makes sense to allow the restaurant some extra time to prepare it.

However, one GrabFood customer apparently lost their patience and axed an order of 45 bowls of noodles from a hawker in One-North, who had already finished preparing the dishes. 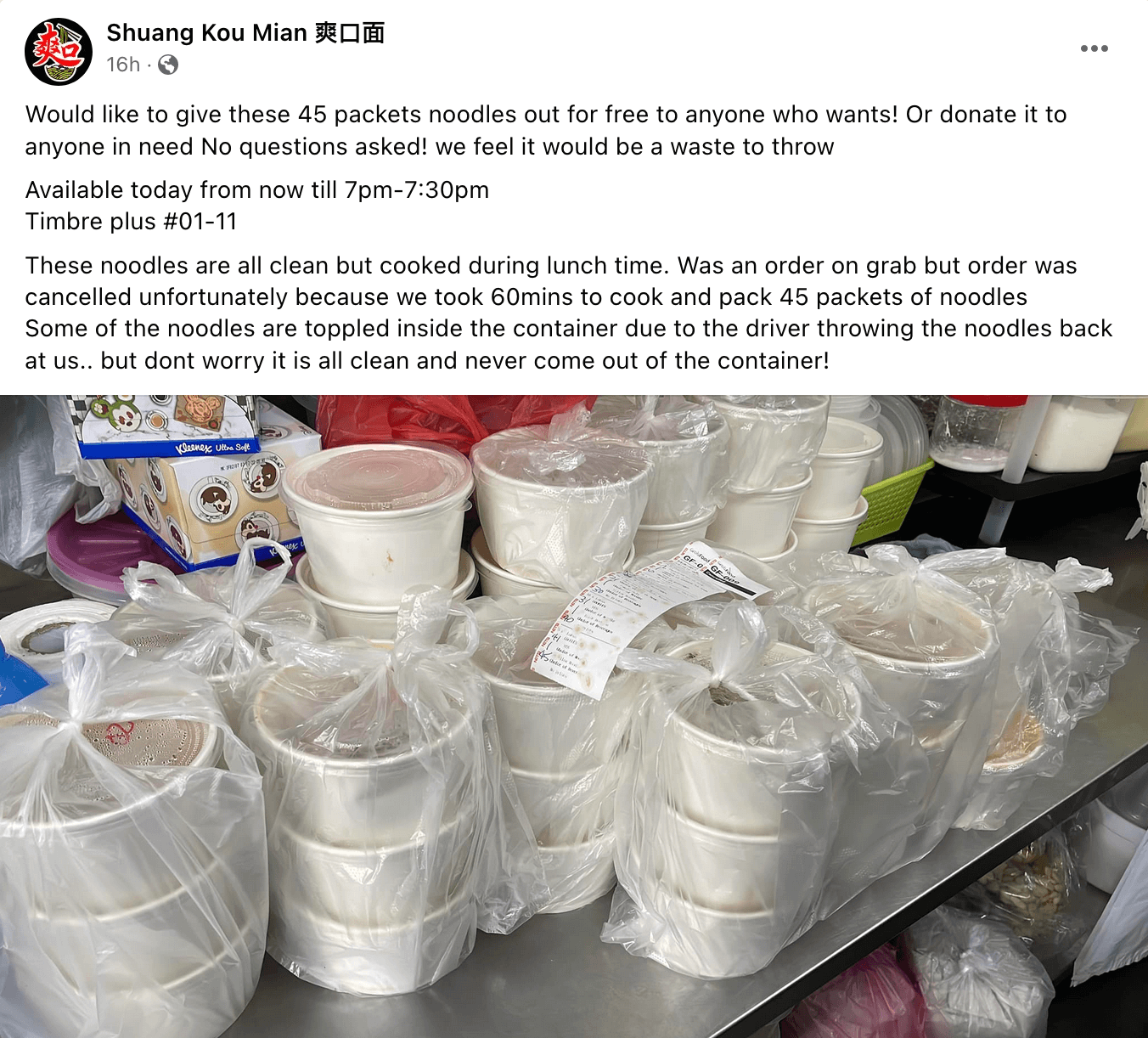 Not wanting to let the noodles go to waste, the hawker decided to give them away for free.

One-North hawker gives away 45 packets of noodles for free

On Thursday (20 Oct), Shuang Kou Mian, a stall in Timbre+ One North, shared on the Hawkers United – Dabao 2020 Facebook page that they were giving away 45 packets of noodles completely free.

They revealed that it took them a whole hour to prepare the food — which doesn’t sound too unreasonable considering that they were whipping up enough noodles to feed four football teams.

But the GrabFood user who placed the order apparently didn’t think so and cancelled it after presumably losing patience.

Instead of letting the abandoned nosh go to waste, Shuang Kou Mian decided to offer them to anyone who wants them without taking a cent.

Anyone could go down to their stall from 7pm to 7.30pm that day to collect the packets. 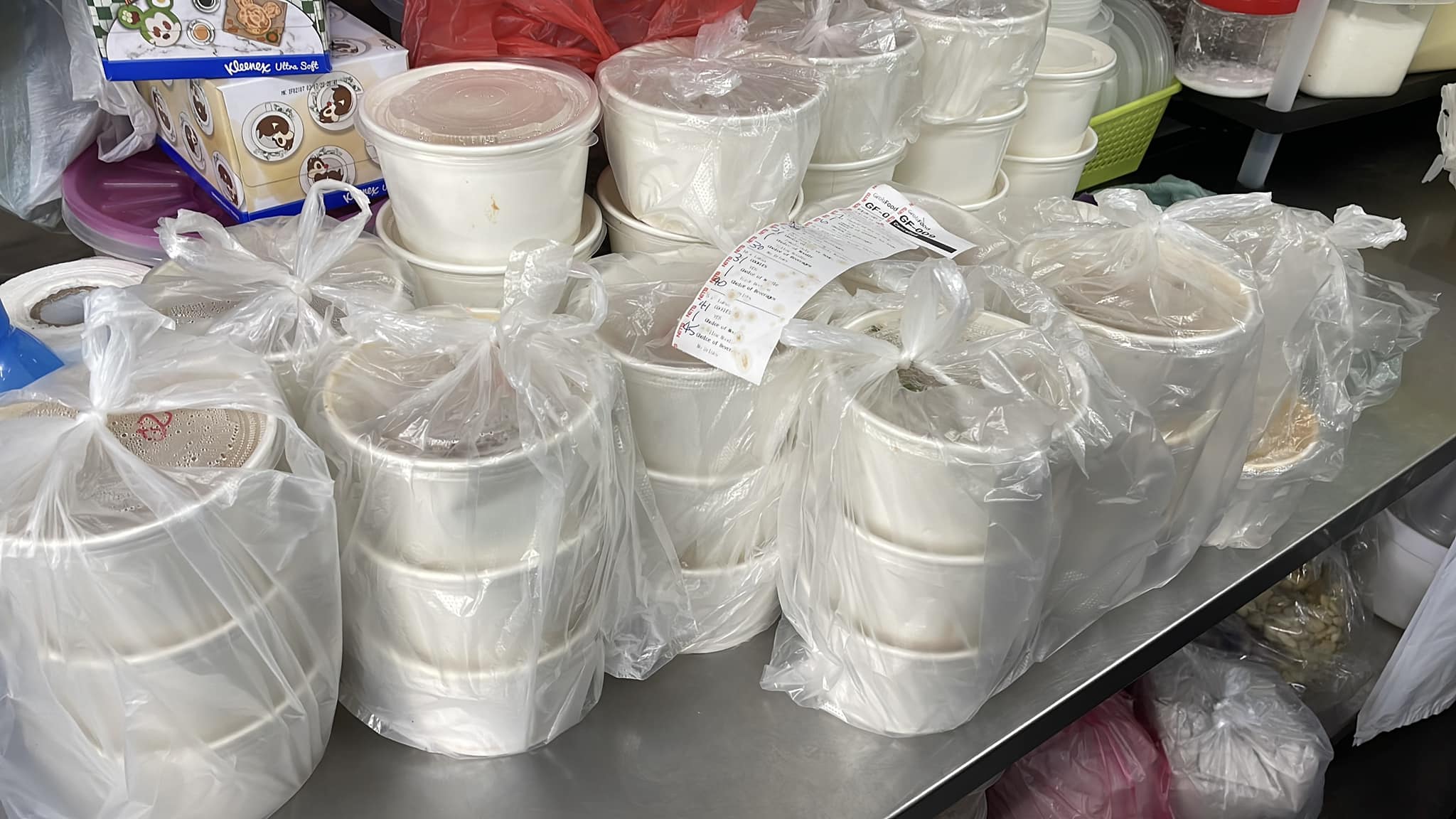 While Shuang Kou Mian assured everyone that the food was “clean”, some of the noodles inside the containers had toppled over because the GrabFood rider allegedly threw the packets back at them.

Judging by the comments on the Facebook post, users seem appalled by the behaviour of both the customer and the GrabFood rider.

They pointed out that the person who made the order should have allowed the stall a lot more time to prepare such a massive serving of food.

One commenter said that the GrabFood customer should pay for the food.

Others criticised the delivery rider for throwing the noodles back at the hawkers.

However, someone came to the rider’s defence and pointed out that he could’ve been unhappy about not being able to earn anything from the cancelled order.

In their reply to a user lambasting the delivery rider on another Facebook page, Shuang Kou Mian revealed that it’s “actually very normal” for them to receive such treatment, particularly during lunch periods. 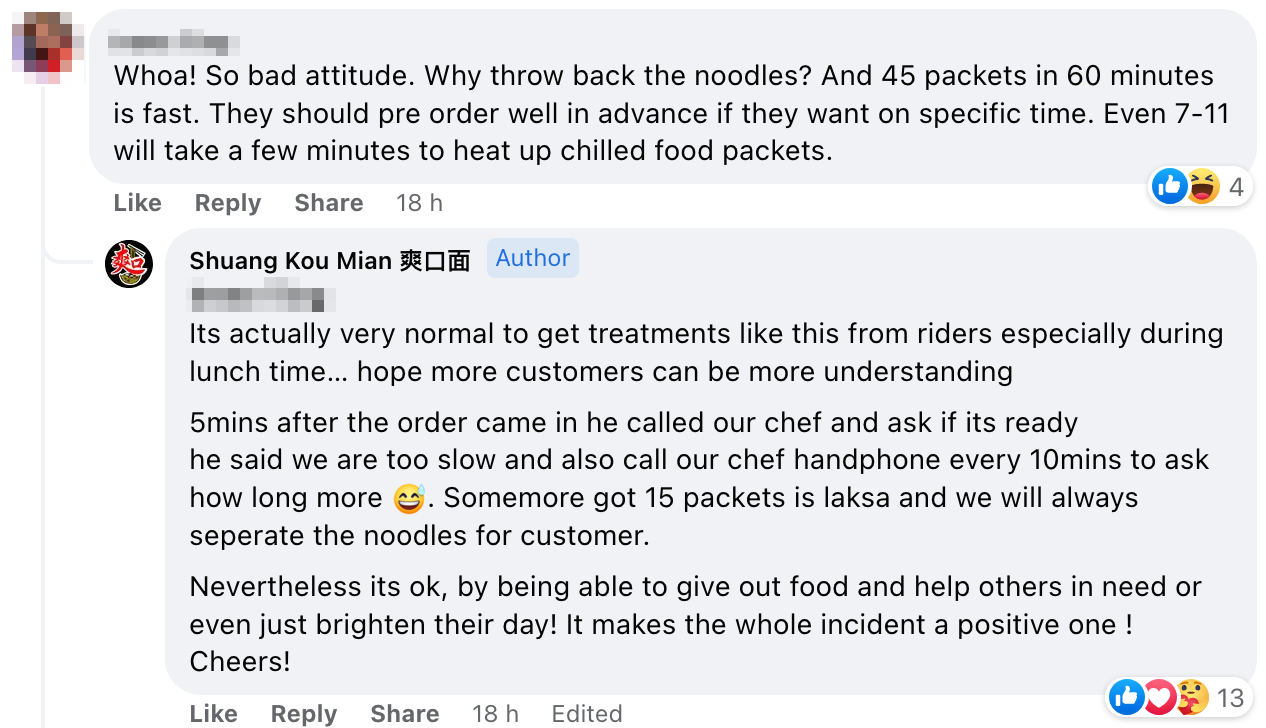 According to the stall, the rider called the chef just five minutes after the order came in to ask if it was ready, saying they were “too slow”.

He subsequently called the chef every 10 minutes to ask how long more they would take.

Of course, Shuang Kou Mian needed lots of time — they had 15 packets of laksa to prep, and they always separate the noodles for takeaway orders.

Despite their ordeal, Shuang Kou Mian remained optimistic and even managed to find a silver lining to the whole saga.

They said they were happy to be able to give out food and help others in need, or even just make someone’s day better. They wrote in a comment that,

It makes the whole incident a positive one!

Not long after their post went up, Shuang Kou Mian shared an update that all the noodles had been claimed.

They also took the opportunity to inform everyone about the ‘Belanja Eat’ initiative that they’re a part of. 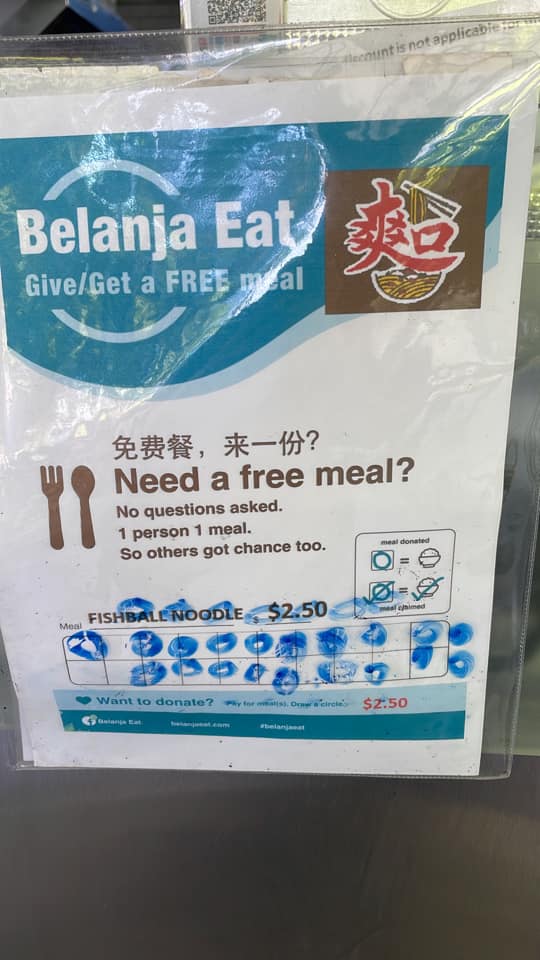 ‘Belanja Eat’ lets customers donate a meal by paying for an extra dish. Then, anyone who needs the food can claim it from the participating stall.

We get that it’s easy to lose patience when you’re ‘hangry’, but that’s no excuse for cancelling a large order when the eatery is supposedly taking too long to cook them.

As commenters noted, even fast food and instant noodles need time to be prepared.

In any case, props to Shuang Kou Mian for reacting so graciously to the turn of events.

If any of you would like to support them and their ‘Belanja Eat’ initiative, here’s how you can find the stall:

Here’s to hoping that customers will be more gracious and considerate, especially towards hawkers who are working hard to serve them.