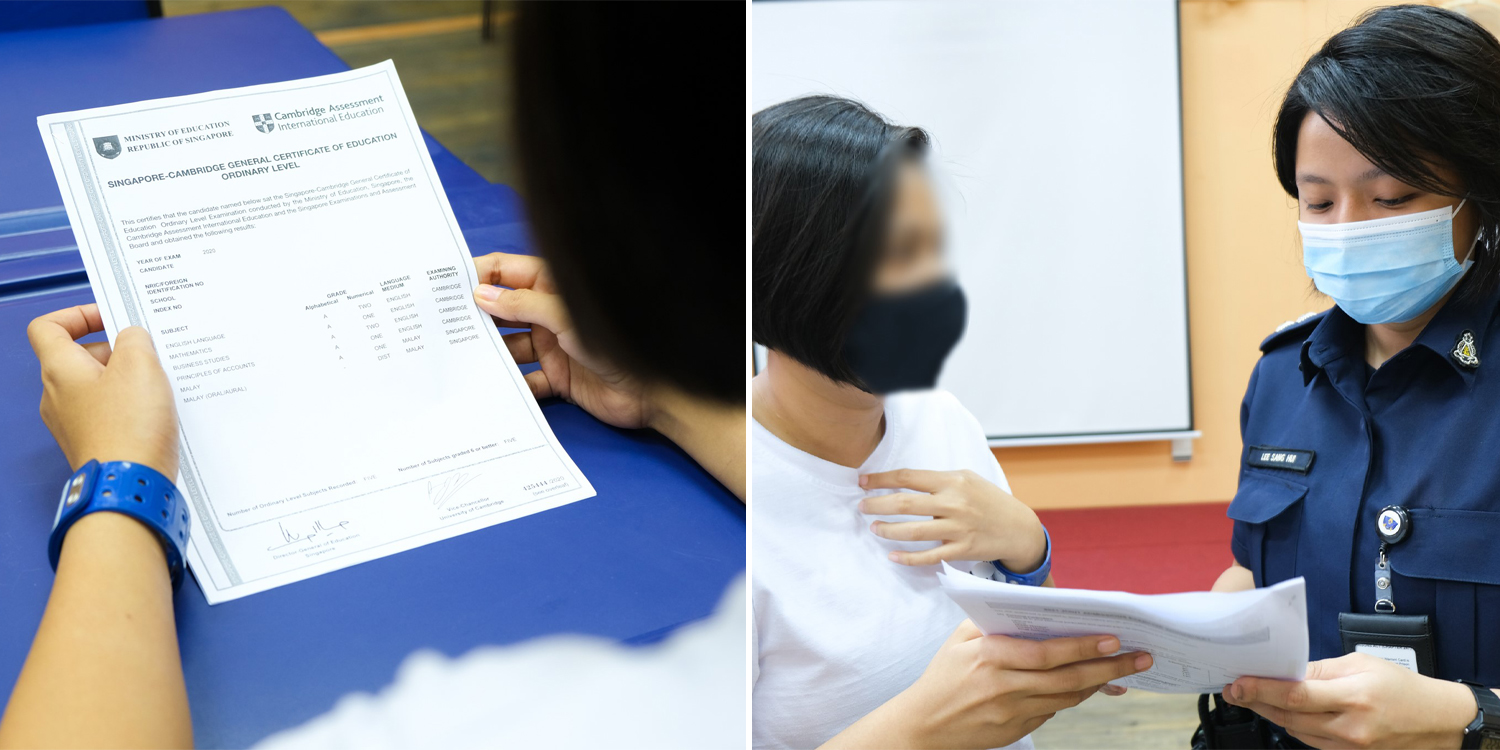 Doing well at any exams is a testament to the hard work and dedication one puts in.

For some who’ve had to endure many obstacles and challenges, the result slip in their hands becomes all the more meaningful.

Singapore Prison Services (SPS) shared the story of a 29-year-old inmate by the pseudonym Anna, who achieved stellar O-level results on Wednesday (13 Jan). 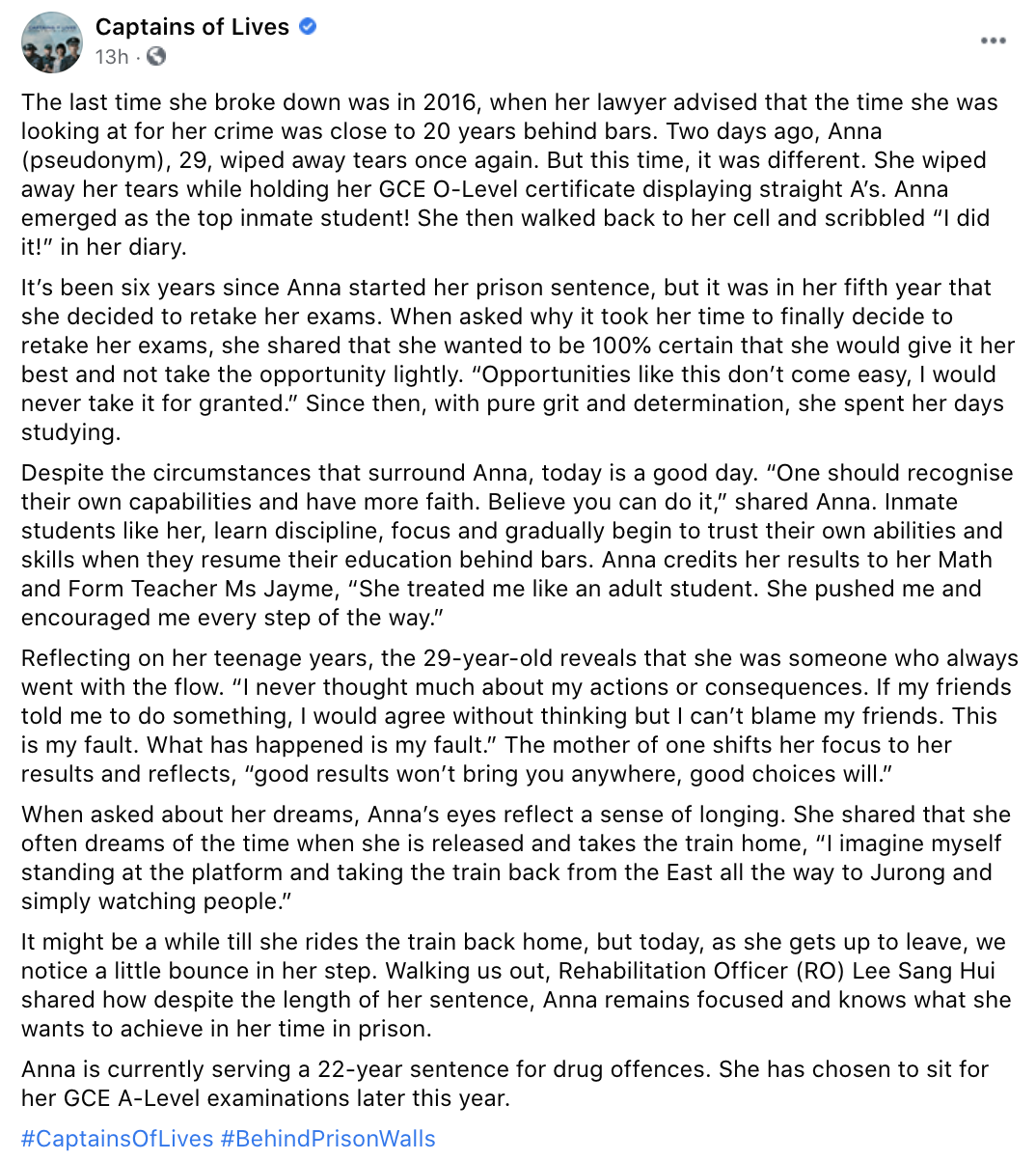 She scored straight ‘A’s, emerging as the top inmate student.

Receiving the result slip was an emotional moment for Anna, who is 6 years into her 22-year sentence.

On 11 Jan, students who sat for the O-Level examinations late last year received their results. Among them were a batch of prison inmates who also took their exams in 2020.

As they celebrated the fruits of their labour, one in particular, Anna, had much to cheer about. There on her certificate, plain as day, were 5 straight ‘A’s. 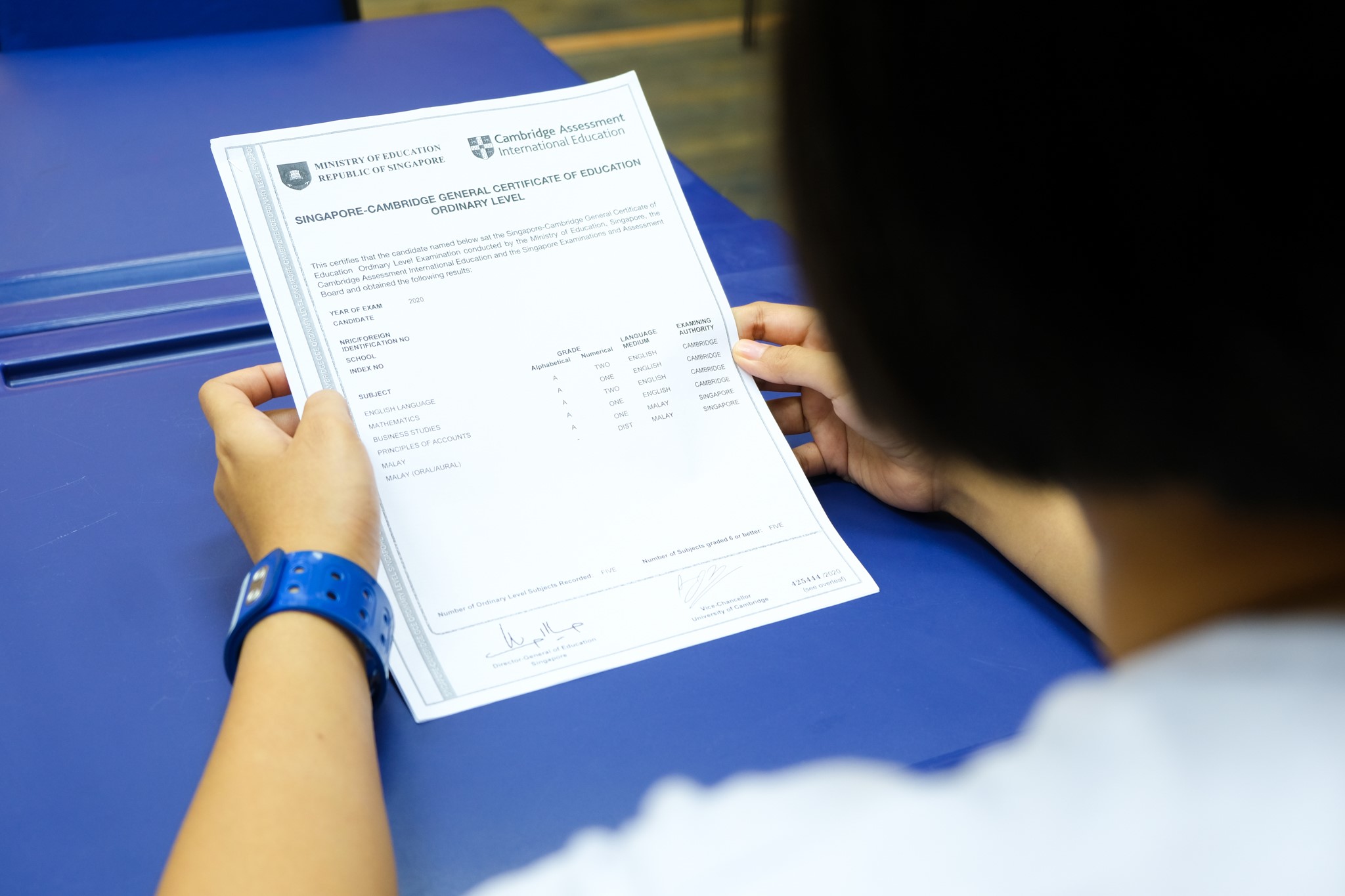 With her string of top grades, it was no surprise that Anna emerged top among her fellow inmates.

According to Captains of Lives, her eyes welled up with tears of joy as she walked back to her cell and scribbled, “I did it!” in her diary.

For Anna who is serving a 22-year sentence for drug offences, retaking the O-Level exams is a precious opportunity.

Realising this, she only made her decision 5 years into her sentence, as she wanted to make sure she could give her very best.

From then on, she spent her days studying, and managed to achieve her stellar results through pure grit and determination.

Journey has taught her to believe in herself

Anna remarked that the journey has taught her important lessons about believing in herself and all that she’s capable of.

She credited her results to her Math and form teacher, Ms Jayme, who always pushed and encouraged her. 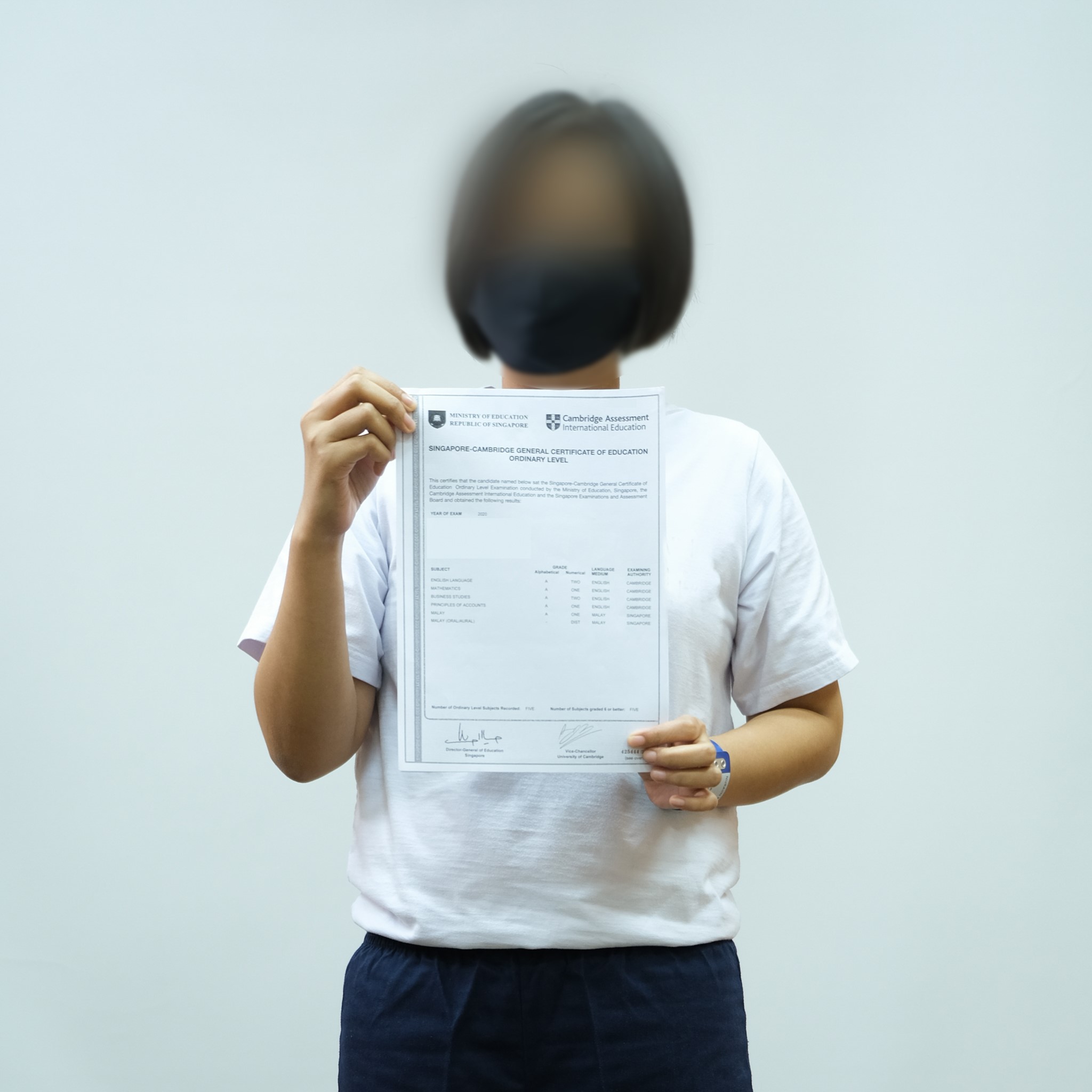 In a moment of reflection, the 29-year-old said,

The mother of one shared that she had always gone with the flow of things, never putting much thought into her actions or their consequences.

But at the end of the day, she has learnt that she needs to take responsibility for her actions.

Hopes to achieve more during her time in prison

With her newfound resolve, Anna plans to take her GCE A-Level exams later this year.

Her belief is shared by a Rehabilitation Officer who acknowledges that despite her long sentence, Anna is focused and knows what she wants to achieve from her time in prison. 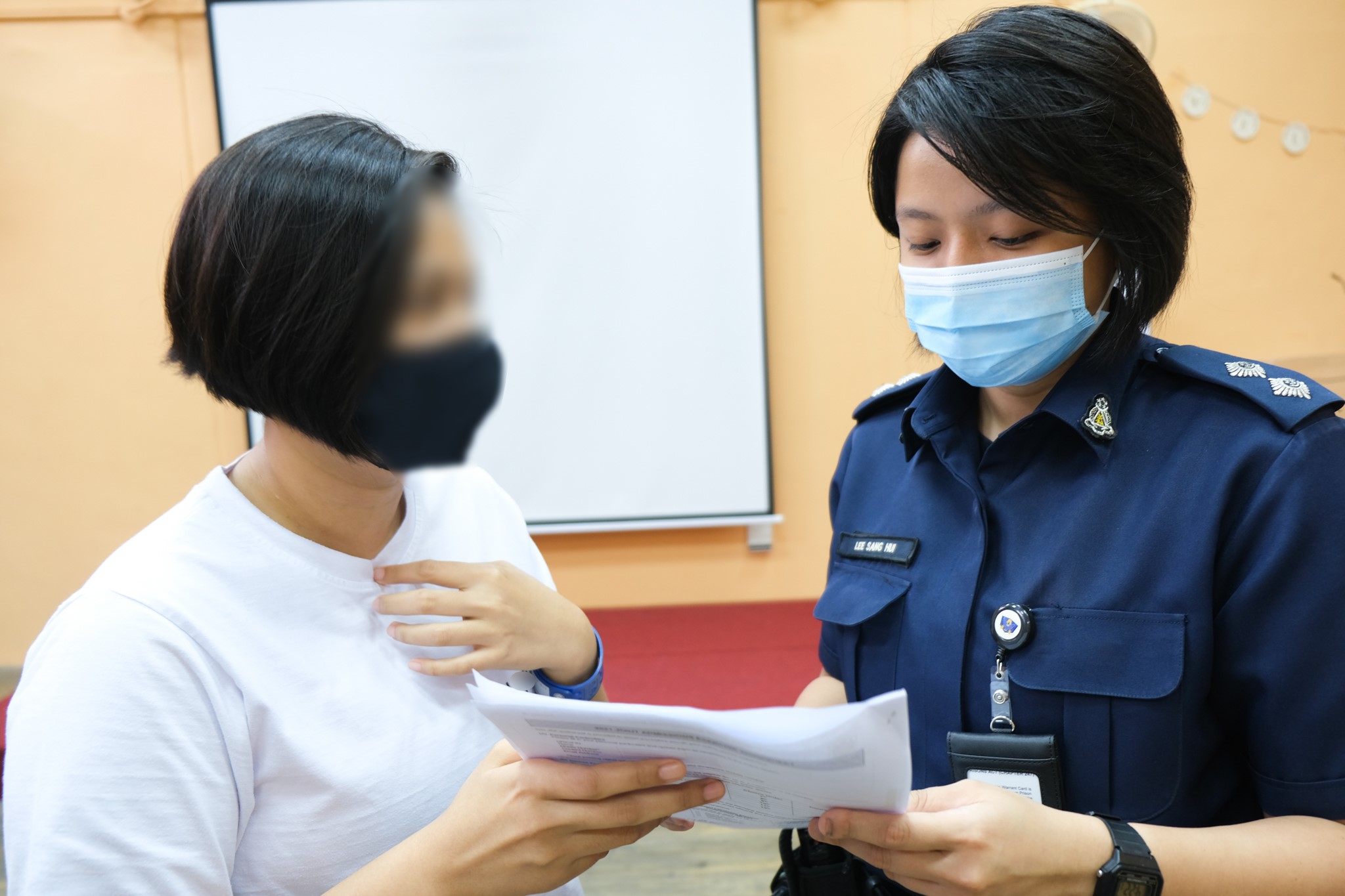 Along the way, these little achievements will be major milestones for Anna, who longs for the day she can take a train ride home.

An inspirational story of growth and determination

Anna’s story is an inspirational one of growth, hard work, and determination.

We hope her amazing results have shown her all that she is capable of achieving, wherever she is in life. Congratulations Anna, and we wish you all the best.