More information revealed that the landlord apparently had her reasons for doing so.

She shared that she had several difficult encounters during previous rentals.

Moreover, as the only female in the household, she felt unsafe to have male tenants at home for extended hours.

Jurong landlord had difficult rentals in the past 5 years

Speaking to Shin Min Daily News, the landlord Ms Zhen – surname directly translated from Chinese – told her side of the story.

Apparently, she’d had to deal with many difficult rental-related issues over the past 5 years.

Many previous tenants allegedly only rented her rooms to have a valid address for their work permit application.

Once their applications came through, they voided the contract and left, according to the 51-year-old. Moreover, as the only female occupant of the house, she’d feel uncomfortable having a male tenant staying in the whole day on MC.

As such, she drew up the rules to show her tenants, to which they agree by signing.

According to Shin Min Daily News, tenants under Ms Zhen cannot have their meals at home.

Instead, they have to eat on a sofa along the corridor outside.

Ms Zhen explains that it’s because there’s only one table meant for 2 pax in the house.

To prevent tenants from getting into disagreements regarding usage of the table, her solution is to give none of them access.

Ms Zhen’s out-of-the-ordinary rental rules were first brought to public attention by one of her tenants.

Seeking advice on Facebook, the Malaysian who just moved to Singapore for work had to leave the house before 7.30am and return only after 8pm. 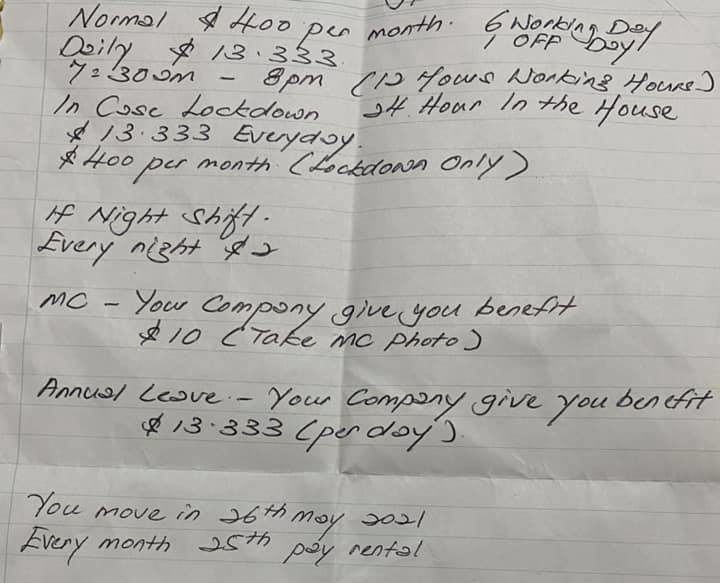 He also had to pay additional charges for staying home on MCs or paid leave.

Realising something was off, the man moved out of Ms Zhen’s house in less than 5 days but not without forfeiting his 1st-month rental and deposit, which amounted to $800.

According to the man, he wasn’t aware of these rules until he’d already paid the rent.

MS News understands that the tenant has made a police report regarding the situation.

Having specific house rules is arguably the freedom of the property owners, but not being upfront about it is problematic.

We hope that the man won’t have to face similar problems at his current accommodation and that the situation can be settled amicably.