Should it be allowed?

UPDATE (30 Oct, 12.31pm): A 38-year-old man has been arrested on Tuesday (29 Oct). He’s suspected for being involved in setting off the fireworks between HDB blocks along Jurong West Street 73.

No injuries were reported, and investigations are ongoing, reports TODAY Online.

On Deepavali last year, 2 men were arrested for setting off fireworks at Race Course Road and Yishun without permits. They were charged and if convicted, could be jailed for up to two years and fined between $2,000 and $10,000.

A resident, or a group of them, apparently took no heed of that incident and did the same thing yesterday (27 Oct). 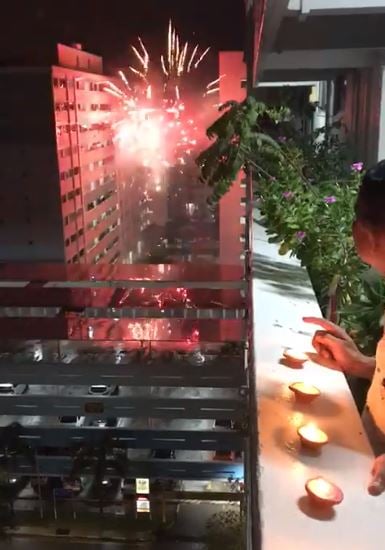 A video showing huge fireworks near some blocks of flats in Jurong West was uploaded to Facebook page Fake News — Singapore. You can view the full video here.

The clip has been gathering some attention, with over 400 likes and 140 comments.

It is not clear from the video alone how long the fireworks went on for. But one thing is for sure — they were quite massive.

Internet users were a little divided on the performance. Some thanked the person behind the fireworks for the display, while others considered it very dangerous.

Deepavali is after all the festival of lights. So naturally, some netizens were thankful for the display, which added to the festive mood.

There were also netizens who expressed disapproval. Particularly, because it could be dangerous to other residents. Not only can the sparks cause fires, but the smoke may also cause breathing difficulties.

One netizen, however, tried to find a middle ground. He really hopes that people can celebrate festivities with such displays of light, and that the government designate a safe area where such activities are allowed.

Celebrate, but don’t endanger other people

When we’re in the festive mood, we sometimes fail to recognise the dangers posed by our actions.

The fireworks may have been spectacular and made lots of people happy. But something could well have gone wrong. So let’s all practice a little more consideration and, also very importantly, celebrate within the boundaries of the law.