Men With Knife & Pole Get Into Fight At Orchard; Unarmed Man Praised For Breaking It Up The hero Singapore needs, but not the one it deserves.

If you were faced with the choice of risking yourself for the better good, would you? One Singaporean man appears to have done just that.

A Facebook video surfaced on Friday (12 Apr) about a group of men at Orchard who got into a scuffle with weapons. That’s when an unarmed bystander came forward to break up the fight.

We wouldn’t encourage that any of our readers emulate the brave man’s actions, especially since it’s extremely dangerous.

But we’re just glad no one appears to have gotten seriously hurt.

The video begins with an argument between two groups of men.

Things quickly escalate when one of them rushes to grab a weapon from his vehicle. A man chases after him to kick him, but he gets hit by another man with a stick.

After swinging his pole a few more times, his friend emerges from the car with a knife.

Bystander tries to break the fight up

The whole situation is extremely appalling. But what’s even more shocking is how an unarmed bystander quickly steps in to calm the man with a pole down.

The man in white is probably not from either group as he tries to de-escalate the situation by standing in between the two groups.

Even when the would-be assailant continued to swing his pole, the bystander stood his ground to break up the fight. 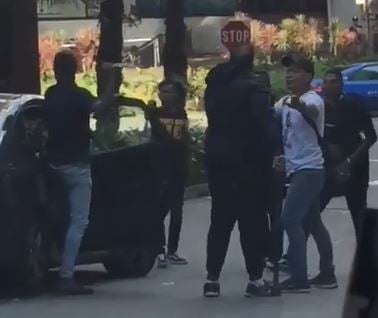 The bystander’s heroic acts were noticed by a few netizens.

One praised him for being brave enough to try and stop the fight even though he was dealing with armed men.

Another netizen praised him for being “peace-loving” and “respectful”.

Of course, given the circumstances it was great that he wasn’t hurt for his efforts.

We’d advise our readers to call the relevant authorities if you do see something of a similar nature break out.

Unfortunately, we are unsure of the outcome of the fight. However, the police have been informed of the situation.

Under Singapore’s law, the man could be placed in jail for a maximum of 3 years and caned up to 6 times.

Even though it seems as if the men holding the weapons are in the wrong, we shouldn’t be so quick to judge.

Perhaps the man was wielding a knife for some other reasons. 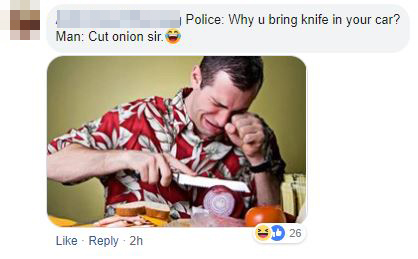 In all seriousness, MS News hopes that no one – including innocent bystanders – was injured in the altercation.