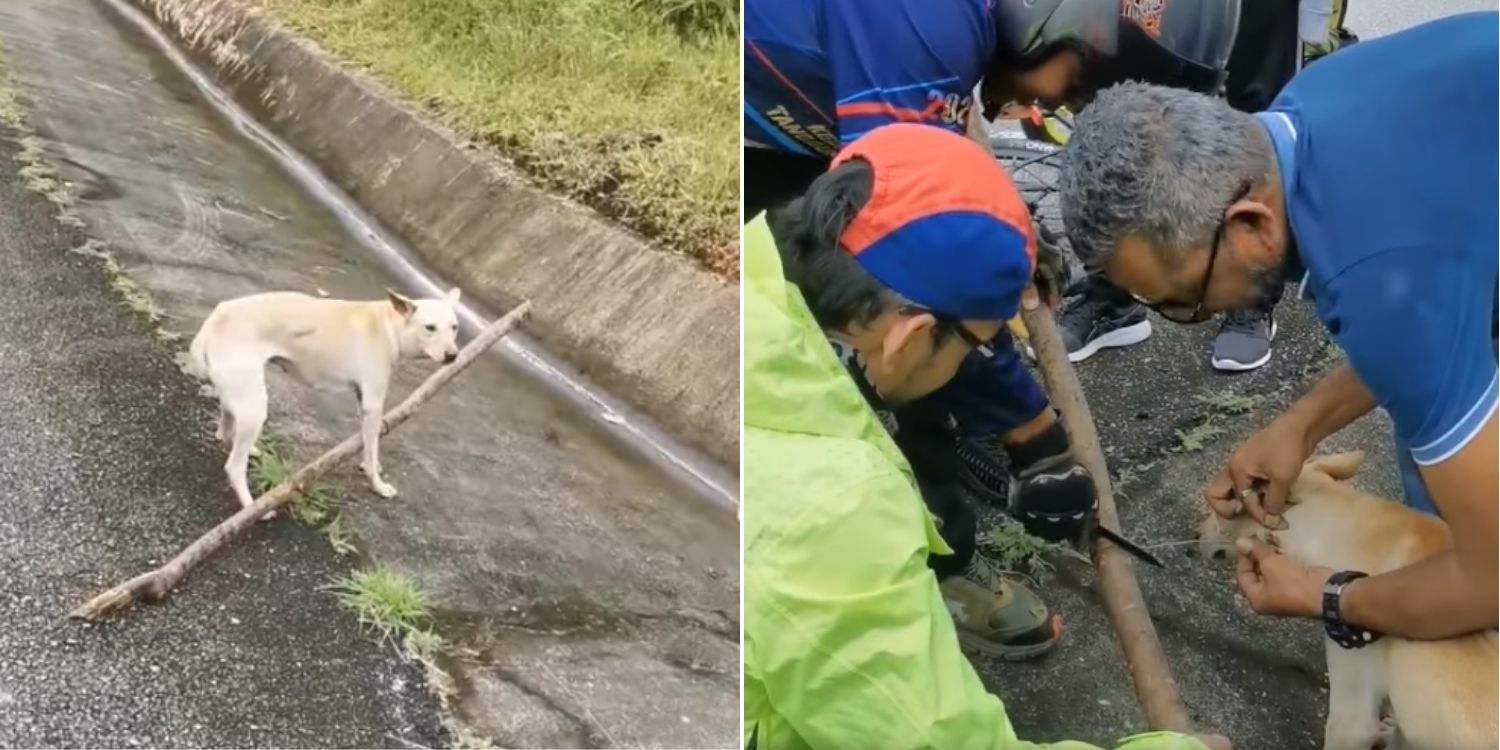 Malaysians Stop To Help Untie Branch From Around Dog’s Neck

For Muslims, touching a dog entails ritual cleansing due to the connotations of impurity. However, this posed no hindrance to a group of Malaysians who saw a doggo in trouble by the roadside yesterday (19 Dec).

With what looked like a long tree branch around its neck, the dog stood still by the roadside as a couple approached.

Clearly in an uncomfortable position to move, it stayed that way even as a man cautiously came forward to help.

Couple chances upon dog with branch around its neck

Facebook user Nahur was out with his wife on Saturday (19 Dec) when they encountered an unusual sight. 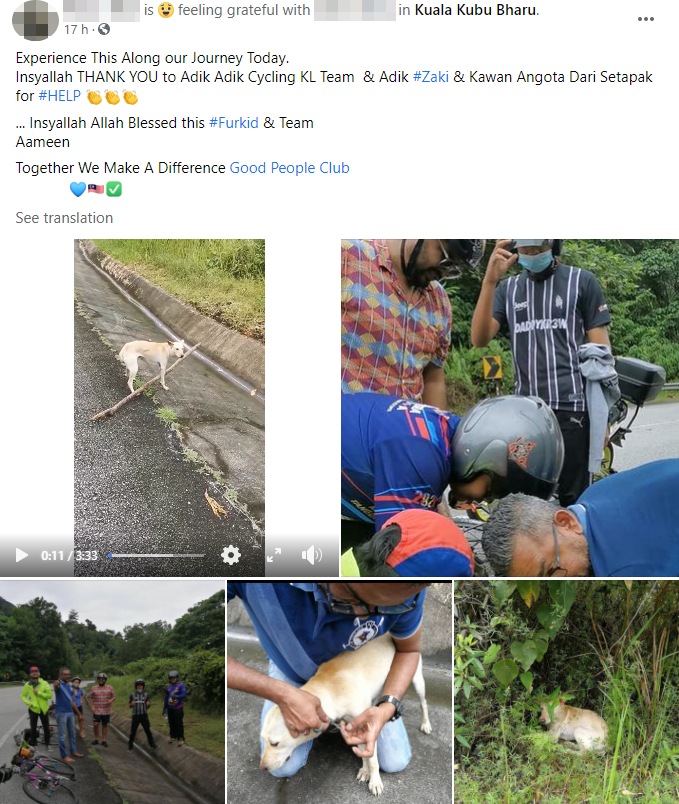 Somewhere along a roadside in Kuala Kubu Bharu, Selangor, Malaysia, a helpless doggo stood alone with a scarily long object seemingly attached to its body.

Upon closer inspection, Nahur and his wife realised that the object was a tree branch. Worse still, it seemed to be tied to the dog’s neck with a metal wire. 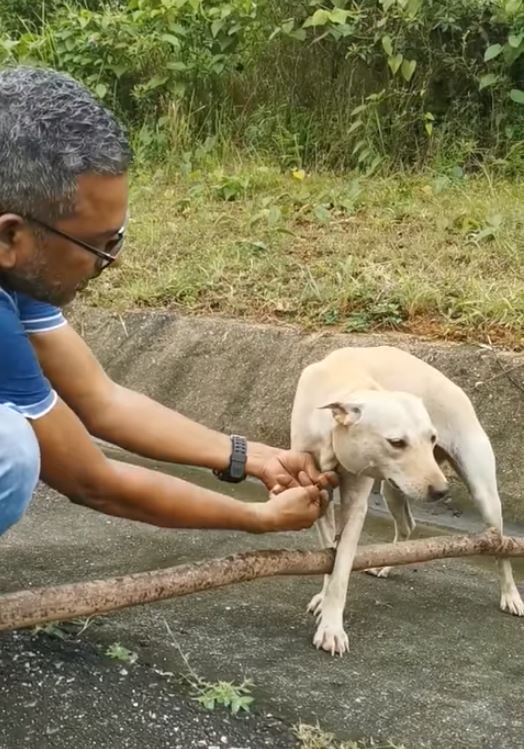 Perhaps aware that untying the wire might cause some discomfort, Nahur addressed the creature gently and patted the dog’s head to calm it down.

Struggle to untie branch from dog

How the dog ended up in such a state was a huge question mark even to Nahur, who struggled to untie the wire from around its neck.

He even had to lift one of the dog’s front legs as it had apparently stepped over the branch. 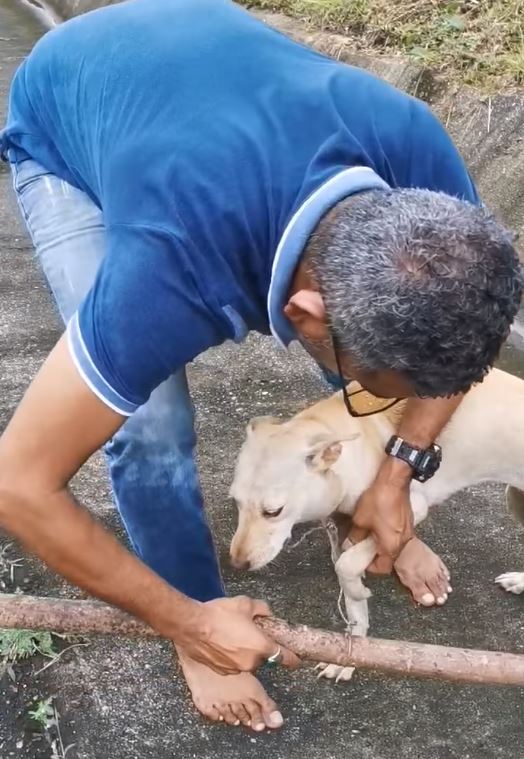 But even after figuring out that slight twist, he struggled to release the dog from its branch and chain.

At several points, his wife who was behind the camera can be heard grimacing, perhaps imagining the pain the dog might be going through.

Strangers passing by stop to help

Thankfully, a group of cyclists happened to pass by shortly after, and noticed Nahur and his wife attending to the dog. As their tools didn’t seem to be making much leeway, a motorcyclist also stopped to help, whipping out his own handy knife. 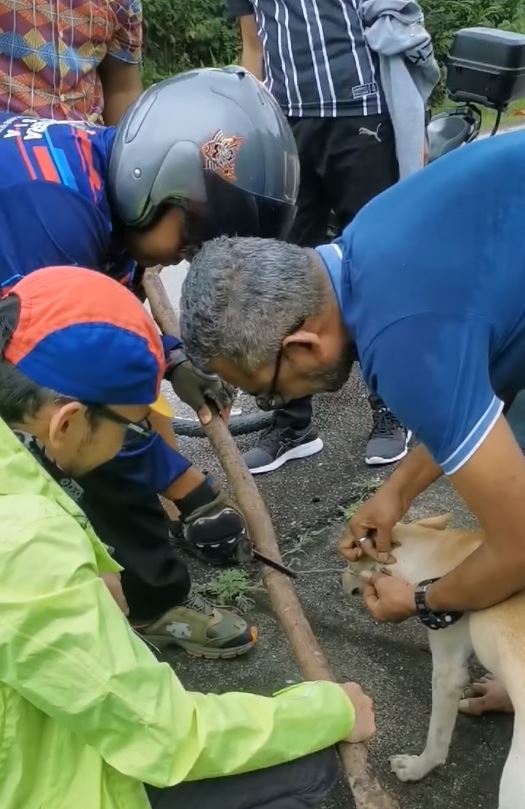 With Nahur holding the dog and the cyclist holding the branch steady, the motorcyclist tried to cut through the rusty wire.

The video then cuts off before resuming at the point where the branch has disappeared, and Nahur attempts to untwist the wire.

At long last, they managed to do it, and Nahur lifted the dog to set it gently by some food someone had left by the roadside. But instead of eating, the doggo turned and trotted to the bushes, perhaps to seek refuge from any other possible danger. As for the hoomans, they only had smiles on their faces, knowing that they had helped a creature in need. Nahur, especially, sincerely thanked the strangers who even offered him water to wash his hands with. 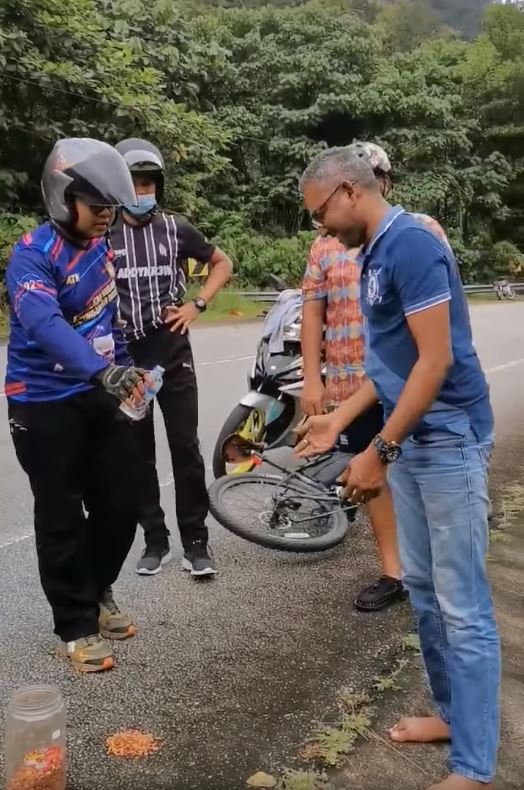 The moment truly was a heartwarming one.

Kudos to the strangers for uniting to help doggo

Though some of us may have reservations about touching animals for various reasons, emergency situations like these may require us to cast them aside.

We’re glad to see these strangers doing that and coming together for the sake of the poor doggo. Kudos to them for being so kind.

We hope the doggo is safe and sound now, wherever it may be.