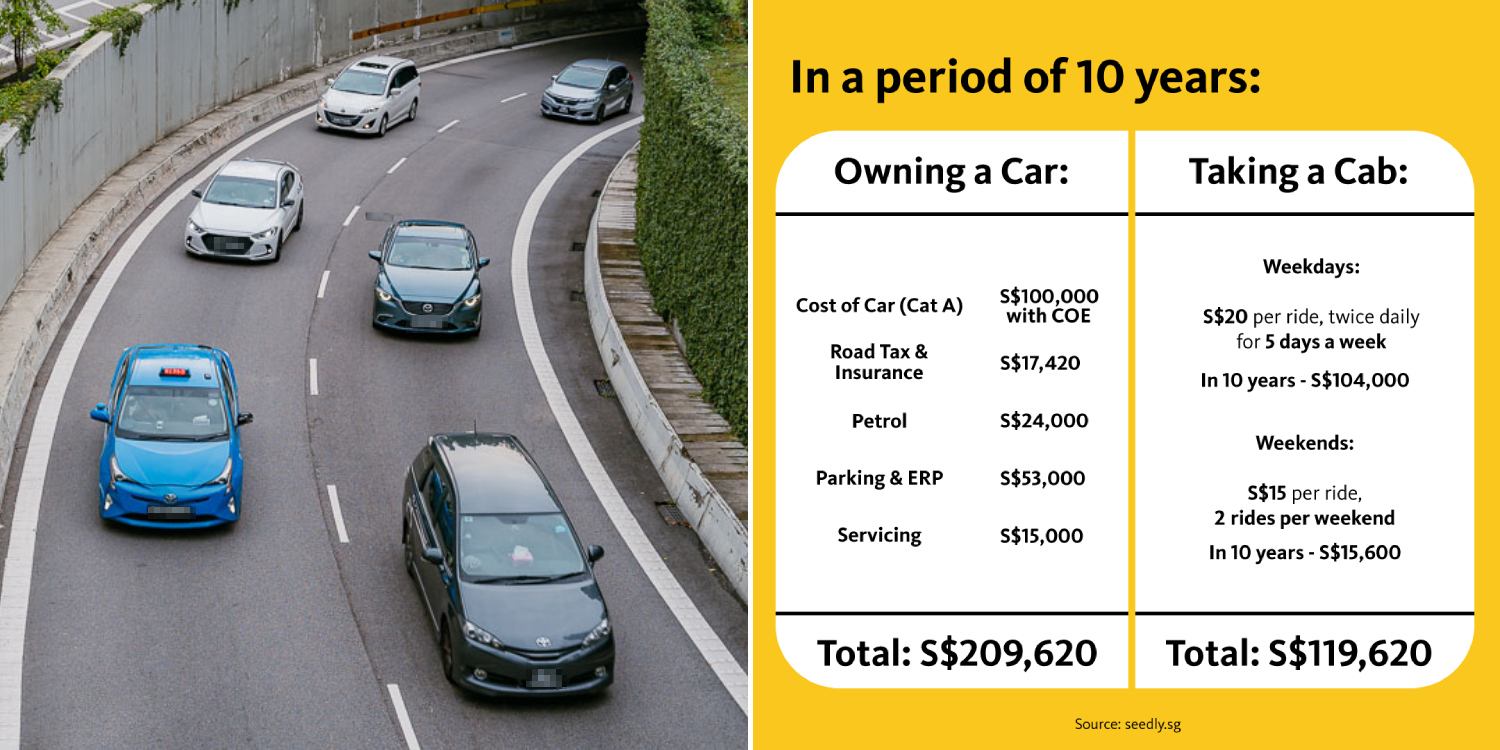 Many felt the estimation of the cab fares was too low and unrealistic.

Most Singaporeans commute by train or bus, but sometimes, it’s often easier to just call a cab or ride-hailing service.

Some also prefer to buy a car for convenience and comfort despite hefty Certificate of Entitlement (COE) prices.

With this, the question remains: is having your own car or taking a cab more cost-effective in the long run?

Maybank Singapore attempted to put the debate to rest recently. 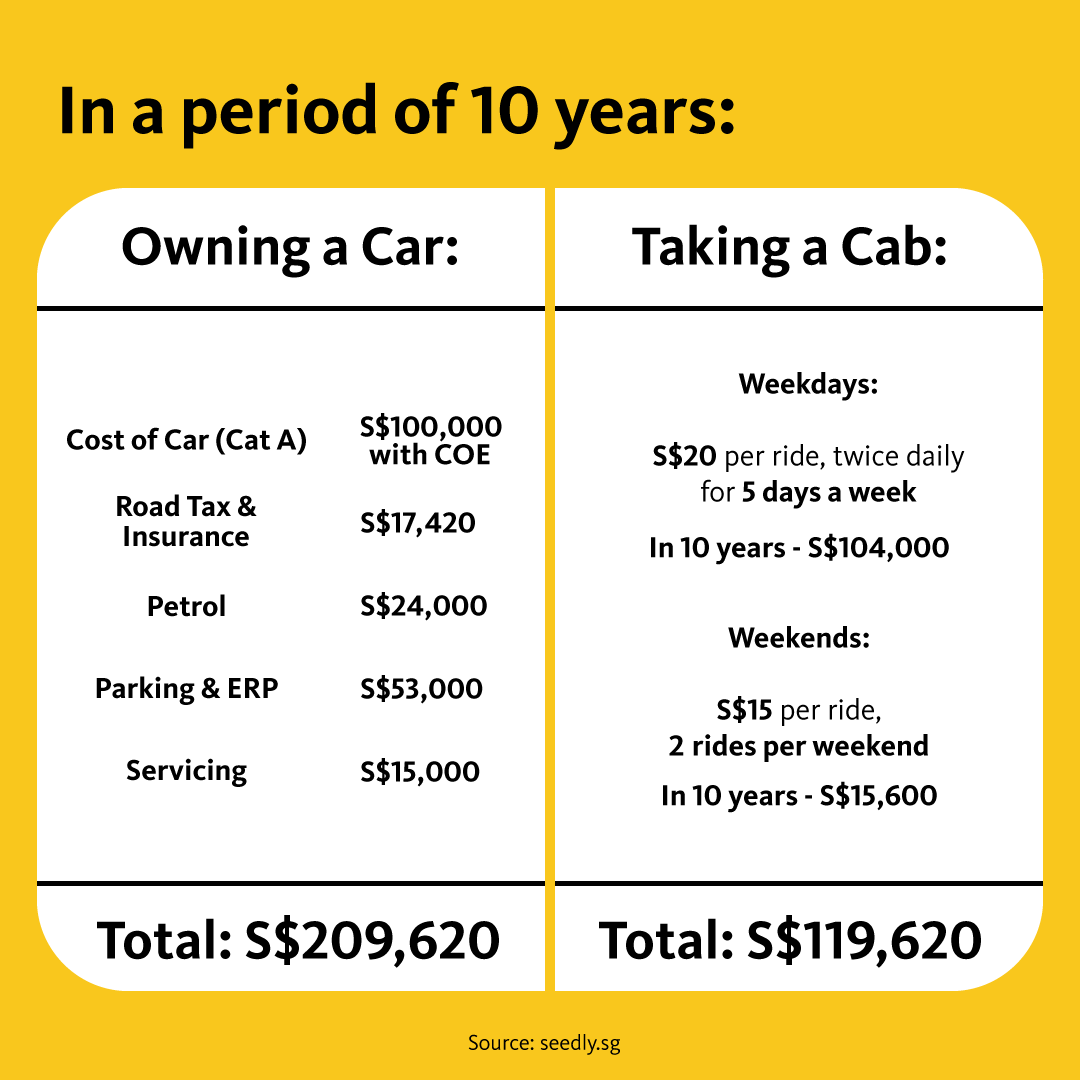 However, their helpful attempt ended up backfiring when netizens pointed out that the prices in the infographic were inaccurate.

On Monday (19 Sep), Maybank posted a series of infographics addressing the age-old question of whether owning a car or taking a cab is more budget-friendly.

In a diagram that compares the cost of car ownership versus taking a cab over a period of 10 years, it appears that the former is far pricier.

Citing information from a Seedly blog post, the post estimates that owning a car will cost S$209,620. 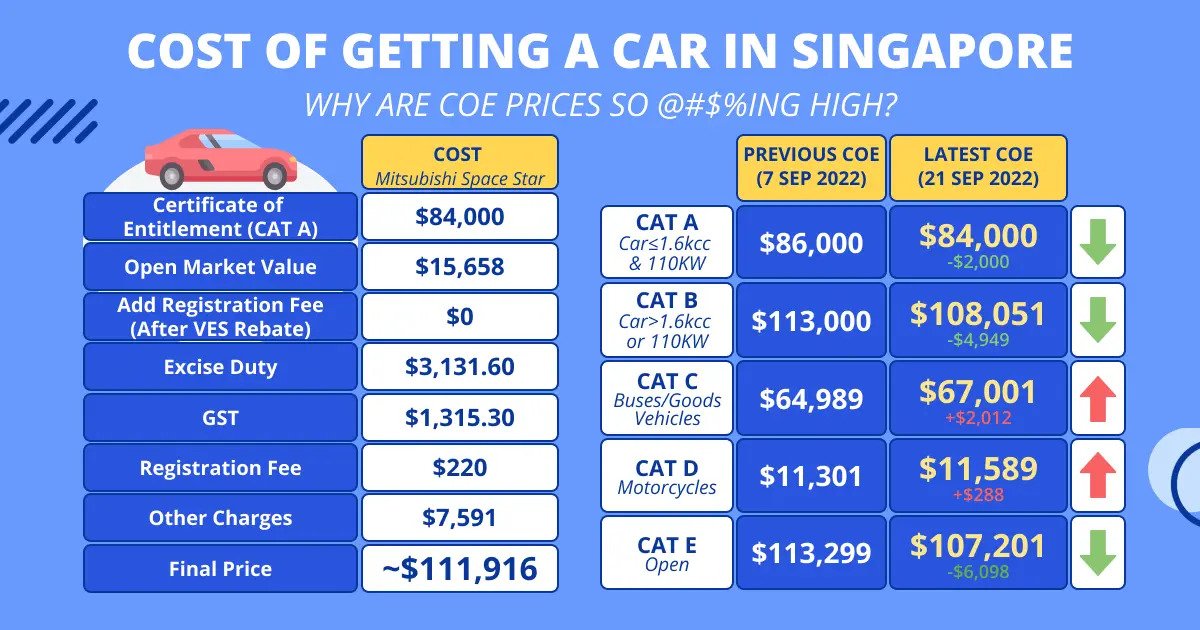 For car ownership, the sum includes the price of a car in COE Category A, its road tax and insurance, petrol, parking and ERP, as well as servicing.

In a separate post, Seedly states that one would need a minimum monthly income of S$8,850 to afford the cheapest new car on the market.

Upon seeing the diagram, netizens were quick to jump on the comments to voice their disagreement.

Both car owners and regular cab passengers felt that judging from their own experiences, the numbers are way too low. Some also stated that the figures are outdated. 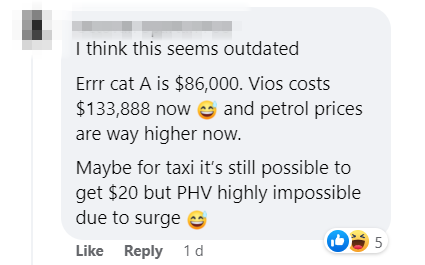 Some even joked that they are in Malaysian Ringgit instead.

Others disagreed with the findings from a different standpoint, such as this user who found it implausible that anyone would take cab rides daily for a decade.

Another commenter remarked that the numbers do not account for inflation, which has caused cab prices to shoot up.

According to some netizens, ride-hailing fares these days can easily go up to S$30 or more.

One of the top comments scoffs, “Tell me how you know nothing about cab fares without telling me”, suggesting that the author of the infographic is out of touch with current prices.

While Maybank’s findings may not have sat well with many, the fact remains that one’s own research matters most in making financial decisions.

We all have budgets and preferences, so it’s always prudent to gather information from as many sources as possible before deciding what’s best for you.

Would you be content with taking public transport for life, or will you save up for a car down the road? Sound off in the comments.