She's a proud owner of a women-only Muay Thai gym.

Many of us will face struggles and failures in life—be it the death of loved ones, parents separating, or business failures.

But what matters is that with each failure, we pick ourselves up and get back on our feet.

For Natalie Soh, 29, her parents got a divorce and her family fell on hard times. She had to adapt quickly to survive, working several part-time jobs while schooling.

What started as a way to shed some weight and learn self-defence eventually became a livelihood as Ms Soh founded and coaches women at 6Sigma Gym, catered specifically for women to train in Muay Thai. 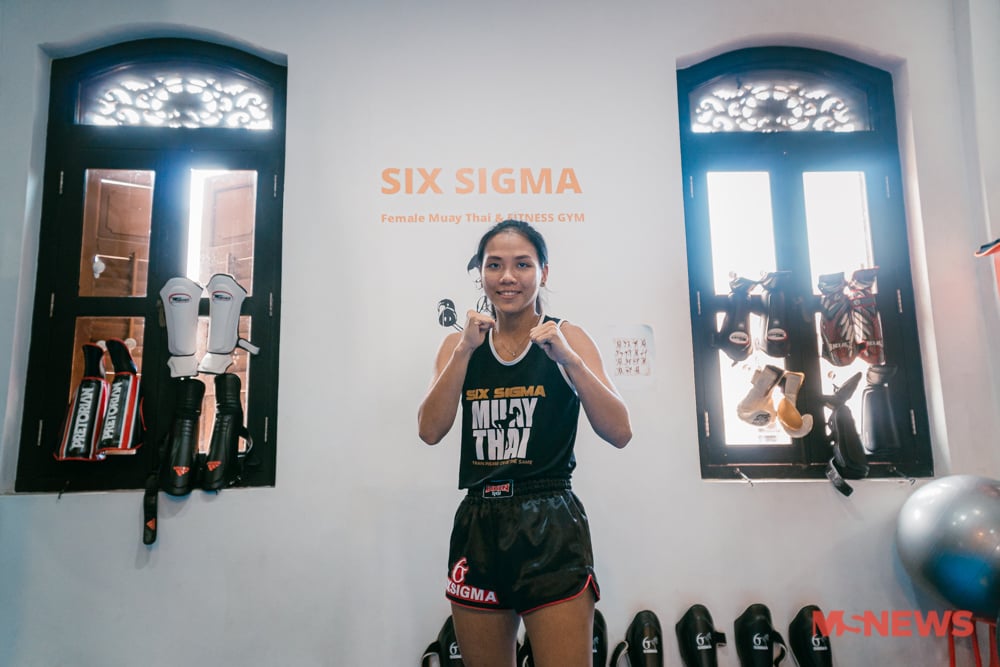 Since she had to train to fight amongst men, she likened herself as being Singapore’s Mulan.

Ms Soh tells MS News that she was something of an “introvert-extrovert” growing up. She’d mingle only if others invited her, and generally lived a rather carefree life.

But everything quickly changed when her parents got a divorce during her PSLE year.

Fearing that she’d be sent to an orphanage, she started working part-time when she was 13, doing all manners of jobs.

She recalls on her first day working at FairPrice, her manager threw a cabbage at her face and told her “you don’t have to come in tomorrow” after she couldn’t pack the vegetable properly.

All this was so she could hang out with her friends, but they never knew about the fact that she worked part-time.

Got into fights & bad company

When she was going through her rebellious teenage phase, coupled with difficult family circumstances, Ms Soh got into trouble frequently and became a regular at the police station due to rioting.

Her mum would have to come down to bail her out each time, and the next day, she’d end up back at the police station.

It got to the point where her mum threatened to apply for a Beyond Parental Control order – now known as Family Guidance Order – which would see Ms Soh being placed in a rehabilitative environment to address disciplinary problems.

She also didn’t dare to ask for money since her parents were going through a tough time. So she resorted to stealing items like cosmetics to fit in with her friends.

Getting into fights in the underground scene also became a way to make money. Fighting became a daily affair.

But it wasn’t until Ms Soh was 16 that she decided to pick up Muay Thai. 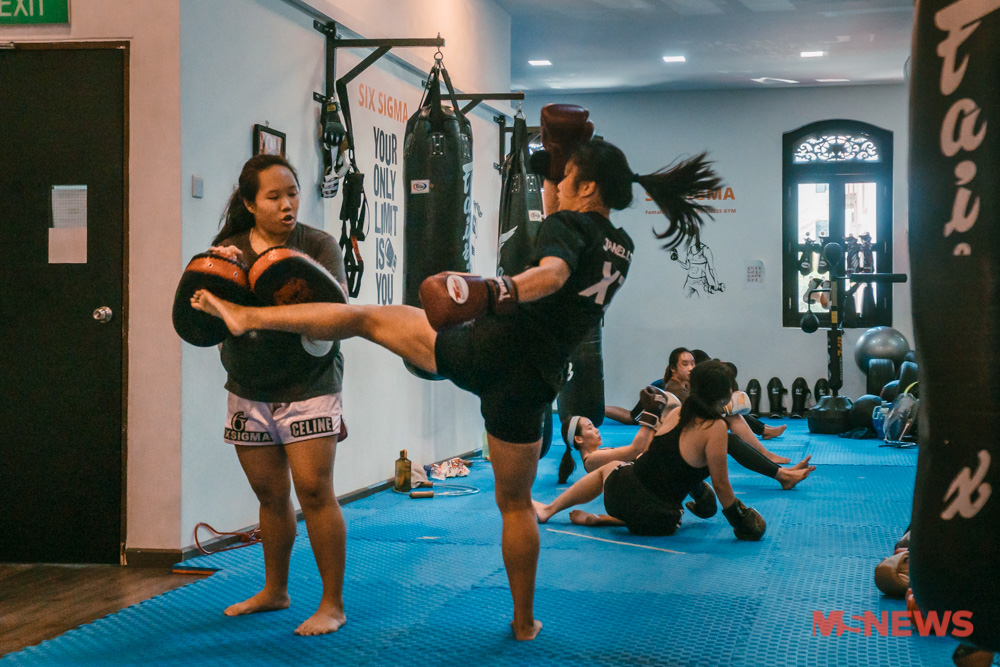 She shared, a little embarrassed, that picking up Muay Thai was to lose weight. She’d suffered heartbreak and binge-ate to get over her loss—by 16, she weighed 73kg.

Ms Soh figured it was a way to build up self-esteem as well as defend herself since she’d been beaten up in fights outside.

She had to adapt quickly to the training since she was in a male-dominated environment, and it was a different level of intensity.

To get better, she held pads for friends on her off-days, and would never come home without bruises all over her body. 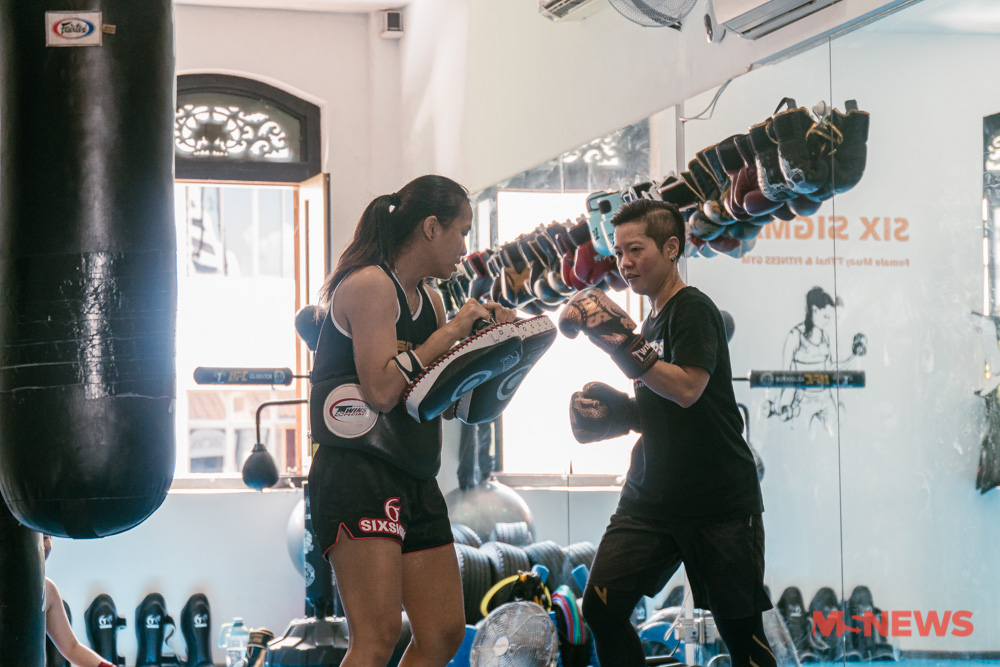 But through perseverance, she went from flying after taking a single kick to being able to train with her male counterparts as equals.

She credits their kindness and support as the reason for persevering with her training.

Later, Ms Soh began helping her coach out in training other students. So began her journey in Muay Thai coaching.

However, she appeared to have a particular knack for coaching as she was able to apply what she knew and tell others how to do the same. 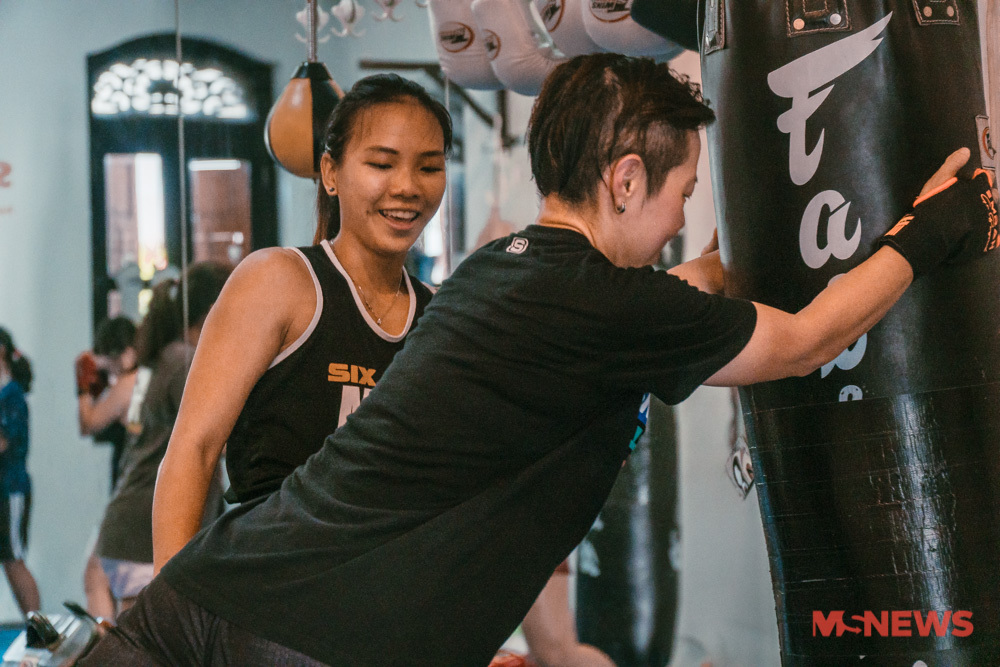 Noticing this, her friends started telling her to start her own gym, even though she had no knowledge of how to run a business.

But through her previous job as a trainer at llaollao, even going to Shenzhen to open a franchise and train staff, there was a lot of trust in her ability.

So with help and encouragement from friends and investors, as well as her own savings, Ms Soh started up her own gym.

Unfortunately, she had to back out from the venture due to a family loss.

But she picked herself up again after a year. “Fail never mind”, her supporters said, “just try again.”

And that led to 6Sigma Gym, located on the 2nd floor of a Joo Chiat shophouse. 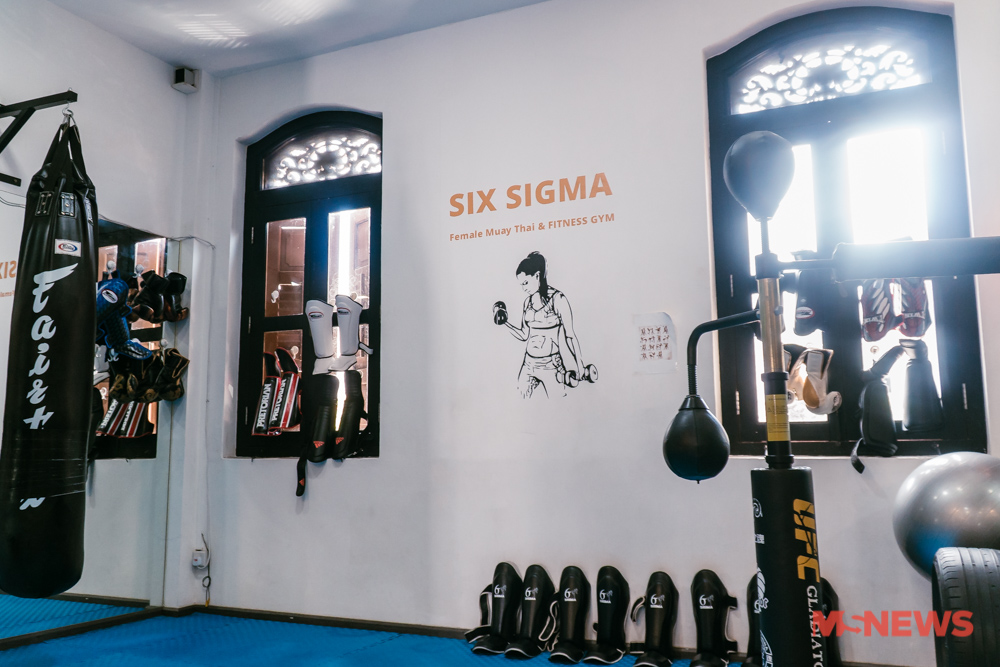 While a relatively small space, it appeared cosy and welcoming, with a physical training session ongoing when MS News visited. 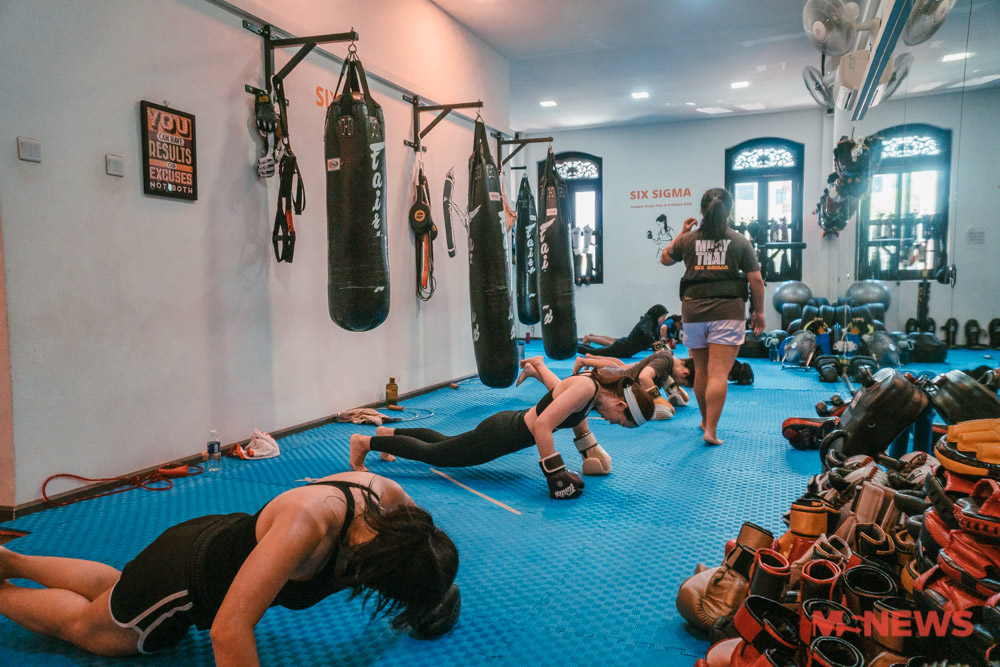 All of the gymgoers were girls, and while they were put through the paces by Ms Soh and another coach, they also shared a friendly camaraderie, going out together to buy lunch after the gruelling session.

Gave free Zoom classes during pandemic to help others

During the ‘Circut Breaker’ last year, gyms could not open, so Ms Soh and her coaches offered free Zoom classes, several times a day.

The main goal wasn’t to make money, but to help others.

You grow and you learn when you help people—it’s a virtuous cycle.

Her gyms are women-only as she thinks they will feel more comfortable and willing to train in an environment that’s less intimidating for women. 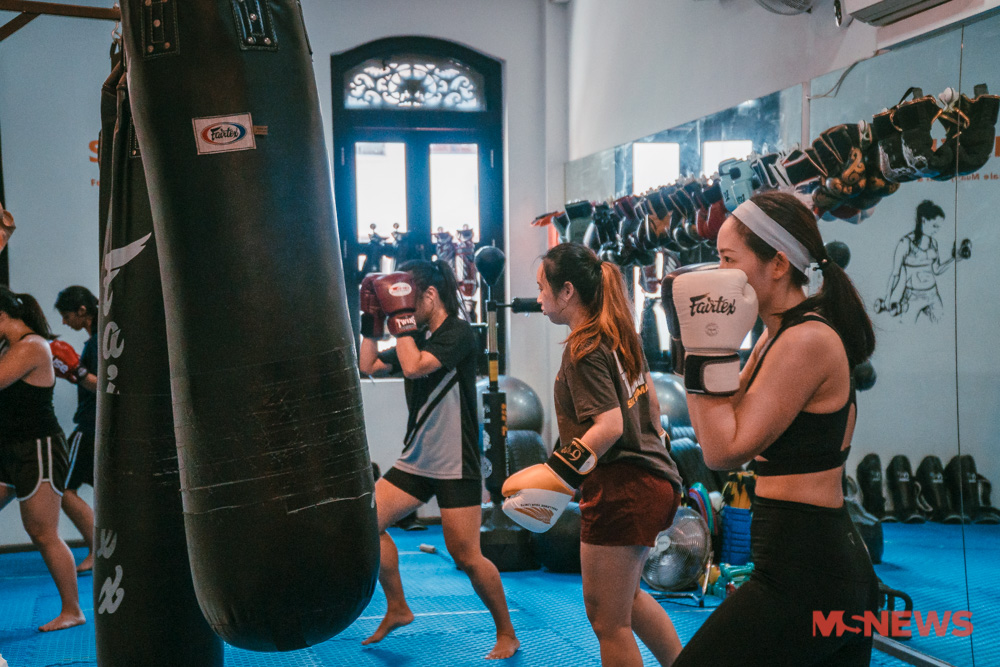 Some of the people she trains are just 13 or 14, but their parents feel safe leaving their children there as it means they’re not going to fight “out there”.

While Ms Soh is grateful for the trust in her, she tells them jokingly to “please pick them up after 5, thank you” with a laugh.

Motivation to fight has to be for oneself

Life has been a huge battle for Ms Soh, day after day. We had a burning question: what motivates her to fight every day? When Ms Soh’s grandparents, who’d taken care of her when she was younger, passed away in 2016, it was a huge shock to the system.

She fell into a deep depression and used Muay Thai as a way to avoid confronting her own feelings, training 6 days a week.

So from then on, she changed her mentality into a more positive one and continued fighting—but this time, for herself.

Before that, she’d been fighting for validation from society and to find her own place in the world.

You’ve got to do things for yourself.

When asked as to what she’d tell her younger self, she chose, “Don’t be so stupid,” in reference to the many mistakes she made growing up.

But she recognised that the choices she made resulted in who she is today—if she hadn’t had to fend for herself from the age of 13, she wouldn’t be as independent, she argued.

She had to learn various things to survive, including life skills and building up her resilience fighting alongside men.

Dying is easy, living is the hardest part. Poverty is the scariest thing you’ll ever meet.

Fighting became her way out of poverty—both figuratively and literally.

A space where women can gain the same things would perhaps not be available if not for what Ms Soh went through.

It’s definitely not been a straightforward life for Ms Soh. However, each time she fell, she had to pick herself up again.

Her story is perhaps proof that one can overcome a difficult life situation through finding what one is good at and working on that passion.

In her case, fighting led her to Muay Thai and discovering a passion for martial arts and teaching.

Ms Soh’s hope is to be able to open another gym branch when the Covid-19 situation is looking better, but finding female Muay Thai coaches isn’t straightforward.

While she feels like she can always strive to do better, what’s she’s doing now – helping other women and providing a safe environment for them to work on their fitness and self-esteem – appears to be more than good enough.