Complaints started during Circuit Breaker in 2020.

In space-constrained Singapore, many residents live in close proximity to one another.

While we’re accustomed to the tight space, some unfortunately still struggle to co-exist peacefully, resorting to complaints that often get escalated to the authorities.

A Singapore resident recently took to social media to share about noise complaints she has allegedly been receiving from her neighbour since the start of ‘Circuit Breaker’ back in 2020.

The mother of 2 young children claims she has had the authorities checking on her on multiple occasions, and even received a legal letter of mediation.

Believing that she has done all she can to accommodate to her neighbour’s request, the lady decided to air her grievances.

In a Facebook post on Monday (7 Jun), Ms Myrnii shared that her neighbour has been complaining of loud noises from her unit since the start of ‘Circuit Breaker’ in 2020. Along with the text, she attached a photo of a letter that reads, “Invitation To Mediate”, sent by the Community Mediation Centre (CMC). 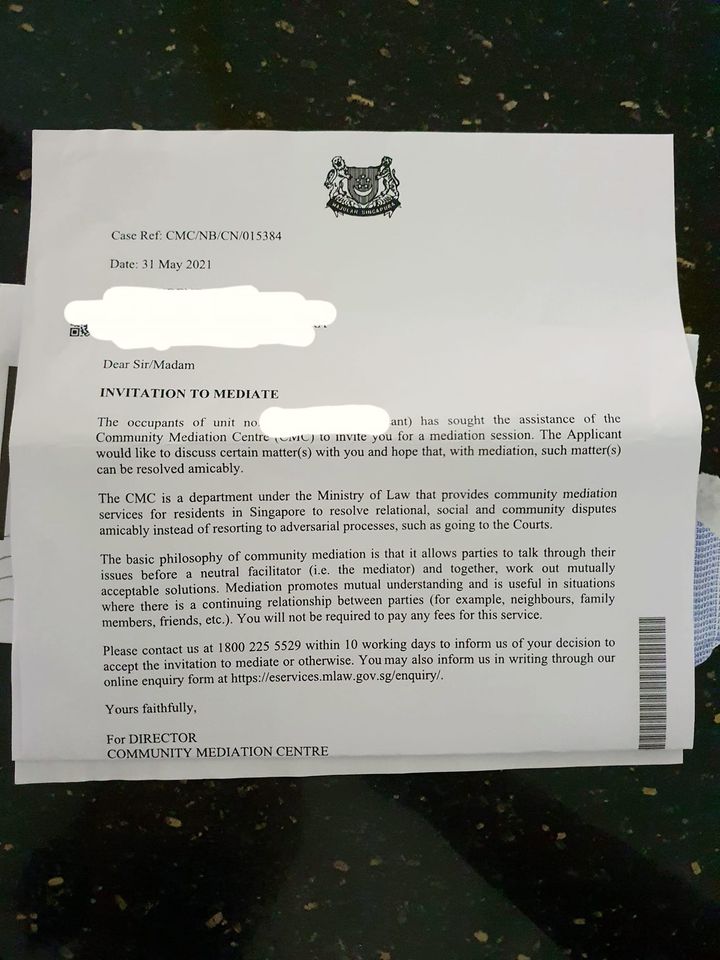 Since then, she has allegedly been visited on countless occasions by the angry neighbour, as well as multiple authoritative bodies.

She added that the authorities have even investigated her and set up operations to capture the alleged noises at her home.

Aside from noise-related gripes, the neighbour apparently complains about smells from heating up food too.

Resident offers a house tour to check for toys

When Phase 2 (Heightened Alert) commenced, many families have had to stay at home to manage the Covid-19 situation in Singapore.

It was at this point that Ms Myrnii said the complaints became more frequent.

Most of them involved vacuum noises as well as noise from her playtime with her young children, aged 1.5 and 2.5 years old.

Having had enough, Ms Myrnii reportedly conducted a house tour to show her neighbours the number of toys in her house, which they agreed was very minimal.

Ms Myrnii also disclosed a schedule which her family follows so that she could function better on a daily basis.

According to the schedule, their daily activities often begin at 8am and end at 8pm. Playtime is also fixed, with set meal and nap timings.

In it, she mentioned that her neighbour had visited her once again to complain about the noise. The neighbour had allegedly stood in front of her house while waiting for her to open the gate.

Ms Myrnii noted that the neighbour specified 7.30am, though her family only wakes up at 8am. She claims to have a recording of their conversation, which she didn’t share in her post.

Ms Myrnii eventually concluded by saying how helpless she’s feeling in this situation.

MS News has reached out to Ms Myrnii for the latest information on her situation. We’ll update the article accordingly.

Hopefully, Ms Myrnii and others in similar situations will be able to find an amicable solution soon. After all, we’d all like to live peacefully in our homes.