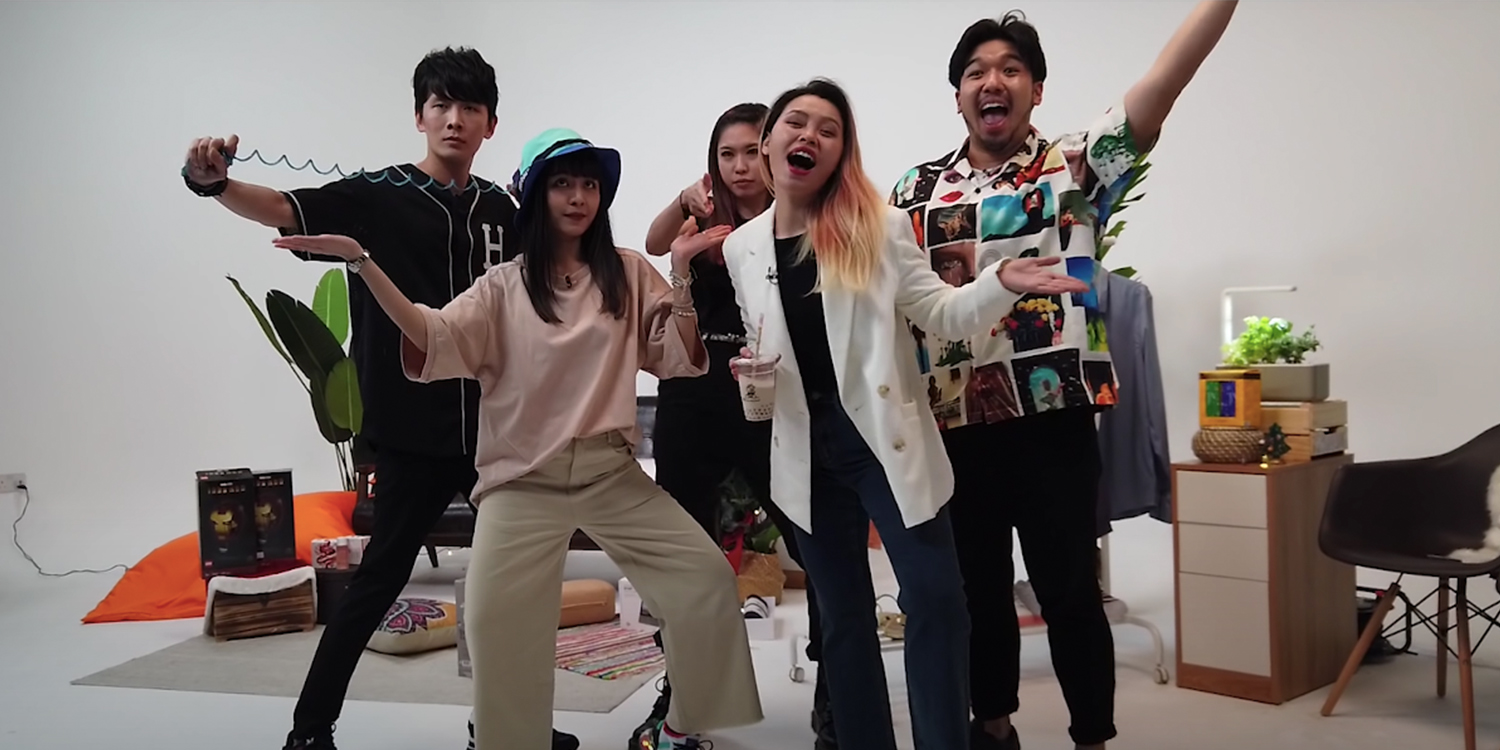 The company's lawyers are currently reviewing the case.

These allegations revolved around co-founder Sylvia Chan, who was accused of using crude language to address company talents.

On Monday (11 Oct), the company has released a 4-page statement on its Instagram page. Here’s everything they said in full.

There’s a TL;DR version after Page 4.

Page 1 – Not the appropriate forum to address scandalous allegations

To our valued artistes, employees, clients, partners and viewers

From its fruition, NOC has persevered to create a safe environment for our artistes and employees to express themselves in a creative and responsible manner to charter new frontiers in the media industry. Our exponential growth and public image are demonstrative of our dedication to set industry standards. We give our artistes and employees equal access to the tools for success whilst learning and growing with them. Most of our artistes have achieved immense followership and credibility with company-led opportunities to partner with top brands.

As with any fast-paced organisation which embraces innovation, the inevitable discourse in expectations will create rifts that are sometimes irreconcilable. In NOC, we have always endeavoured to accept and appreciate these differences to allow us to glean valuable perspectives on various matters. We seek understanding that our internal standards call for a high degree of professionalism, discipline and collaboration for our teams. We invite you to appreciate that the narrative that was fed to you on social media had one purpose, to harm the good name of NOC. The excerpts that are published are cherry-picked abstract communications between private individuals carefully showcased to paint a wholly negative picture. We are advised that there have been serious breaches of the privacy laws and those responsible will be investigated by the authorities.

We implore you to appreciate the intention behind our positions. We aspire to groom reliable and responsible talent and taking a neutral and open approach has been imperative. Wherever efforts to maintain our standards may have fallen short, we did not give up on our teammates nor did we take the easy way out by replacing them. We have guided our artistes and employees to ensure their chance at success, and we will not stand for our good efforts to be blemished by banal allegations. We have put in and will continue investing time and effort to polish our diamonds no matter how rough.

The malicious attacks on us have misled our valued artistes, employees, clients, partners and viewers by providing a biased, traversed and mosaicked factual matrix. In recent days, it has been particularly disheartening to hear that we were branded as “charlatans” for our mental health position. We do not stigmatise nor oppress those with such conditions but seek only to work with them to alleviate their sufferings and assist them in overcoming their challenges.

As a company whose leaders have faced the daunting demons of mental health issues, we do not pay tribute to these immense challenges through lip service to reduce the significance of mental health to a merely denotative term. Instead, we appreciate the seriousness of such challenges and work tirelessly to ensure that those who have raised concerns about their mental health to the company will have access to company-sponsored mental therapy services provided. Hence, it is especially disappointing to witness these efforts to put us in a negative light when our corporate policies support our valued artistes and employees with mental health issues over and beyond the industry practices.

We treat our valued team professionally and accept our differences. Their unshaken loyalty to the company, their hard efforts in demanding and delivering quality work, their dedication to learn and grow together, these contributions from our valued employees shall be in no way disregarded or stepped upon by the words of a loud and faceless group who shroud themselves in anonymity.

We will continue to welcome any constructive feedback to create a better atmosphere for all of us. However, we will not stand for the spirit and soul of our company to be defeated by traversed and malicious attacks by faceless individuals. We welcome any substantiated allegations to be tested before the appropriate forum such as in Court or with the relevant government agencies. We are certainly confident that these allegations will not be able to stand the test of truth.

We will end our statement here as our lawyers are reviewing the matter, and we wish for the process of law to be fair and full. We will not stoop to the level of our malicious attackers in providing the counter facts of the allegations against us as such information may be damaging and/or embarrassing to those involved. We do not believe in fighting fire with facts but in fighting malice with the truth. We believe strongly that the intention behind giving feedback matters the most — to hurt or to help? We are thoroughly confident that NOC will emerge stronger, together. In the meantime, we will vigorously pursue our legal avenues to achieve justice for our NOC team.

In short, NOC believes that the accusations published by the social media account are intended to harm the company’s reputation. And they will not stand for it.

Those who breached privacy laws after divulging “cherry-picked” snippets of conversations between “private individuals” will be investigated by the authorities.

NOC also stands by their mission to promote mental wellness as they have undertaken many initiatives to protect staff who have mental health concerns. This includes offering company-sponsored therapy.

The company’s lawyers are also currently reviewing the case.

Instagram users were the swiftest to pounce on the latest development, given that the letter was first posted on the social media platform.

Given the gravity of the accusations Sylvia and NOC face, netizens mainly were unimpressed by the statement. Many, like this one, clarified that the allegations were “against Sylvia and only Sylvia”. 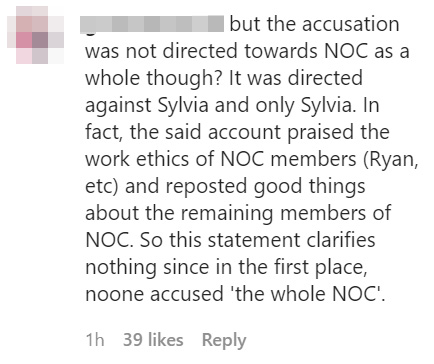 Another said they were disappointed because NOC employees had “nothing to do with this”. They urged NOC to do better. 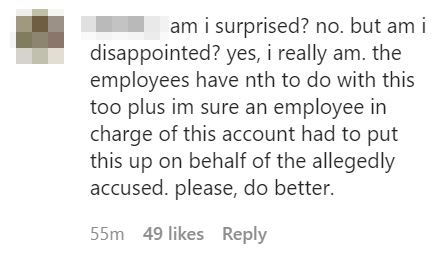 Meanwhile, this netizen wanted clarification on why an NOC talent named Samantha was called a “f*ckface” multiple times.

A handful remains loyal fans to the company, offering words of support and affirmation with emojis.

The letter was subsequently reposted on the Singapore Subreddit and was met with similar sentiments as those expressed on Instagram.

This Redditor said the letter did more harm than good and said those responsible should have apologised instead.

This Redditor pointed out that the list of accusations has ironically made it easier for netizens to learn about the allegations levelled, some of which he didn’t even knew existed initially.

Others also noticed that the accusations involving Samantha weren’t disputed in the lawyer’s letter.

What do you think of NOC’s response to the saga? Let us know in the comments below.