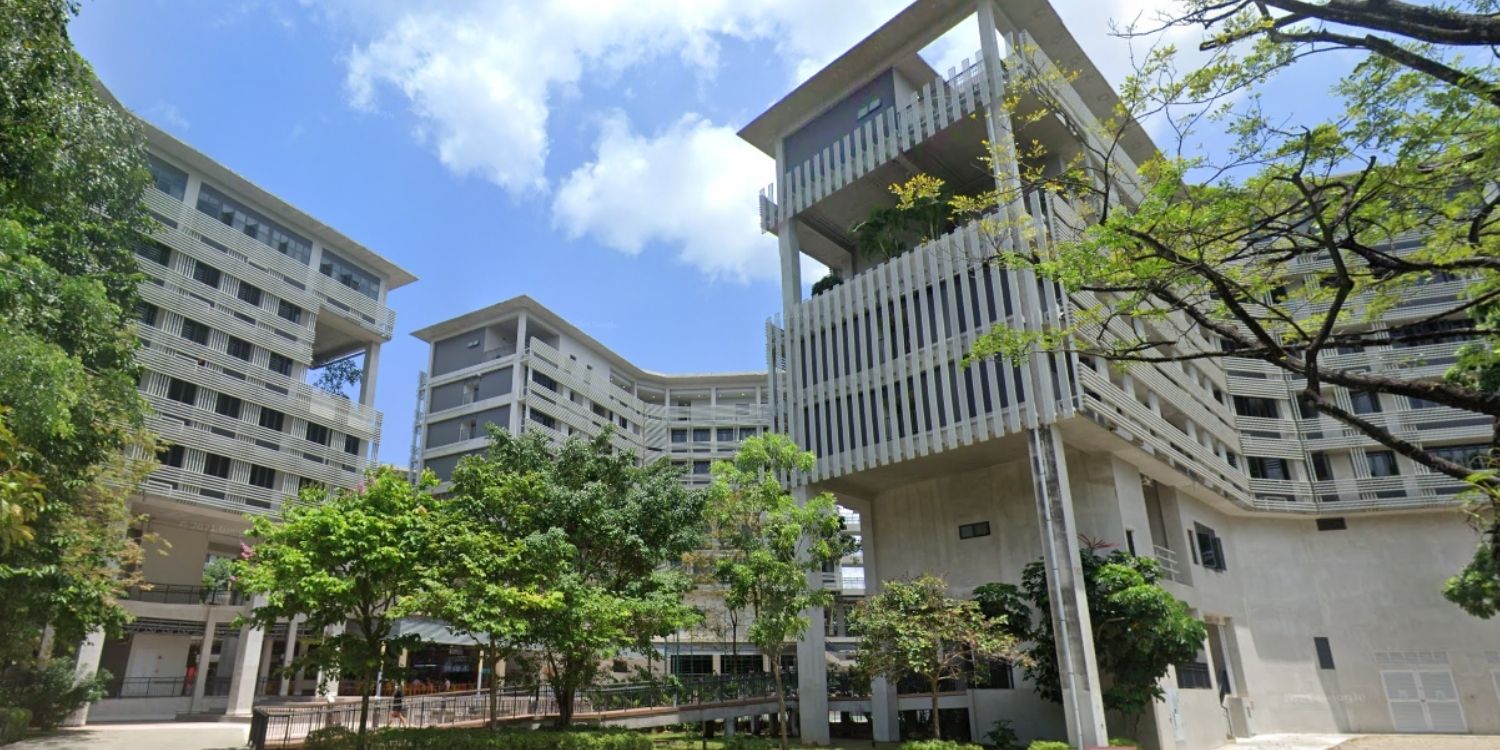 NTU Will Allocate Hall Rooms To Students After Disappointment Over Scramble

For many tertiary graduates, staying in hall was one of the highlights of their uni life, but for some it’s a matter of necessity.

That’s especially for international students with no local homes and those who live far from campus.

Thus, when Nanyang Technological University (NTU) told several students that they’d been unsuccessful in securing hall accommodation, it sparked a scramble for alternatives.

Thankfully, in a U-turn, NTU has guaranteed hall rooms to certain students, including international students and those in Year 1 & 2.

3 groups of students will be allocated rooms

On Friday (2 Jul), NTU Students’ Union posted an Instagram Story of a notice from the Office of Campus Housing (OCH). 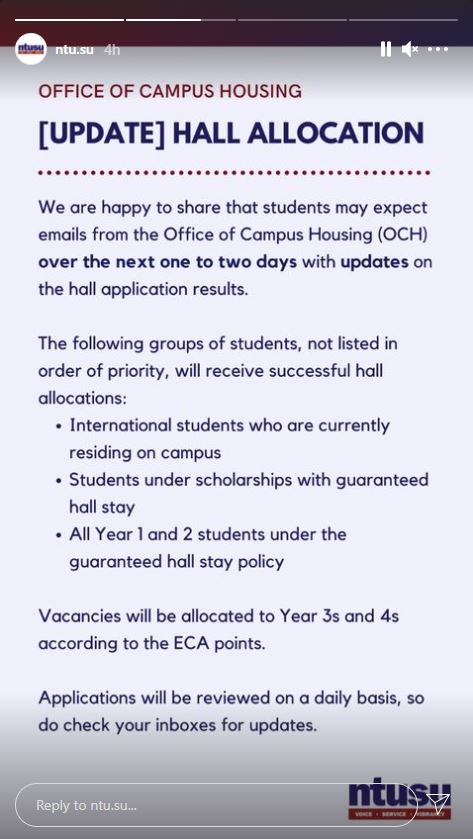 They listed out 3 groups of students that will be successful in being allocated a hall.

As for Year 3 & 4 students, they may be allocated housing too, but depending on their extracurricular activity (ECA) points.

It also said that students who’ve applied for housing will get updates within 1-2 days, so they should check their inboxes.

Another Instagram Story contained a screenshot of an email from OCH director Alvin Chin.

He elaborated on the reasons behind the reversal. 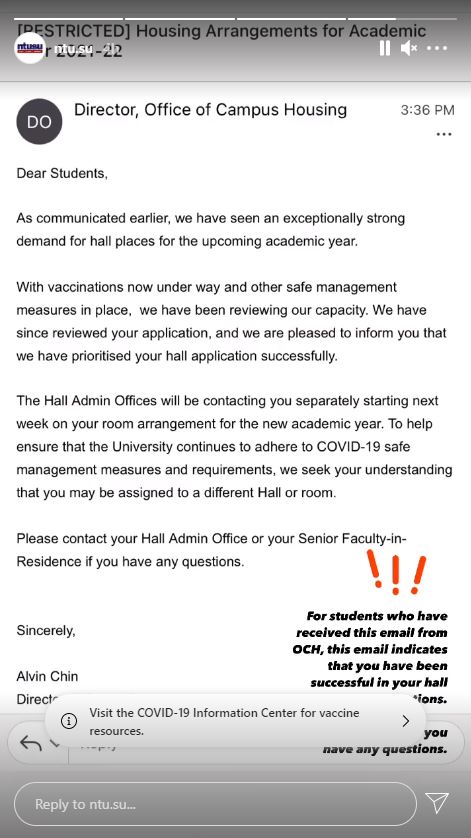 Hall capacity has been reviewed, keeping in mind that vaccinations are underway and safe management measures are in place, he said.

Thus, students who’ve received the email have had their applications reviewed and prioritised successfully.

In other words, they got their room. 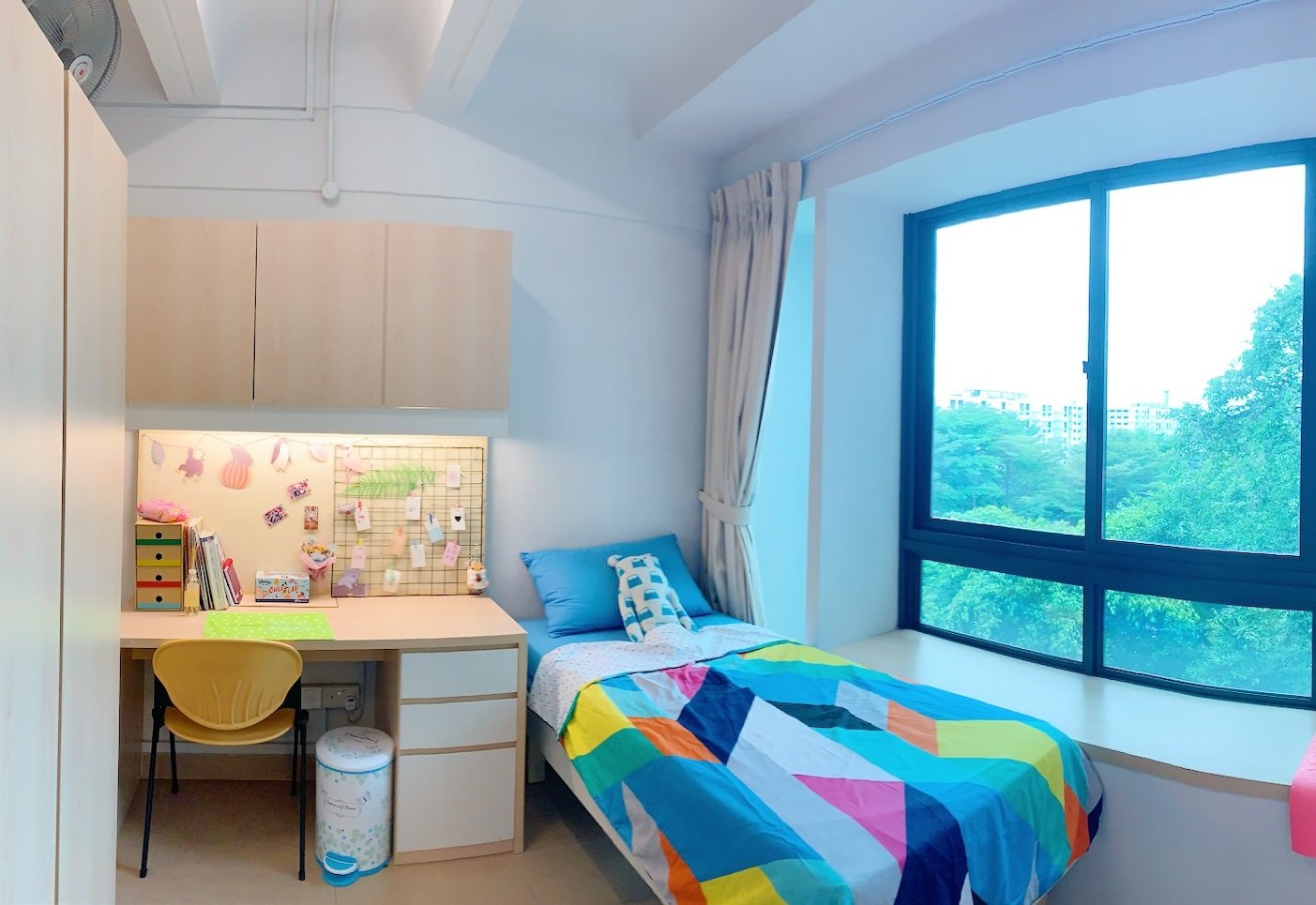 This is despite the “exceptionally strong demand for hall places”.

However, students may get a different hall or room than they applied for due to Covid-19 safe management measures and requirements.

Previously, many NTU students had been disappointed when told that there was a cap on hall students by the authorities, and fewer rooms were available due to the need to reserve a certain number of rooms for Covid-19 isolation and other purposes.

According to an email seen by MS News, campus housing officials also advised students to look for off-campus options, including short-term stays.

Current students on-campus were also given just 2 weeks to pack up and find a new place before 15 Jul, leading to a scramble for accommodation in the area. 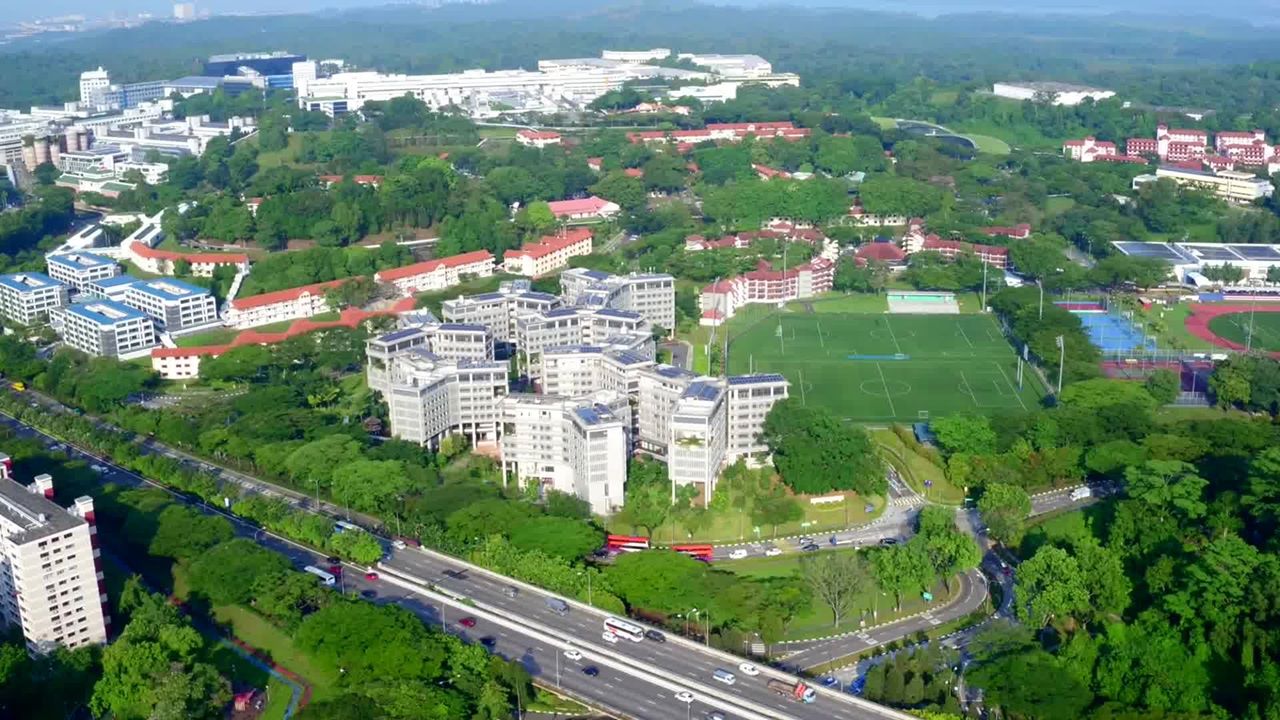 The situation led to several students asking for transparency on the decision-making and welfare for those left without rooms.

After all, they pointed out that Year 1 & 2 students are supposed to be guaranteed places in halls, a policy reflected on the OCH website.

An NTU student also told MS News that that he’d observed several empty rooms at his hall, so the situation where many applicants were denied rooms was “questionable”.

A sigh of relief for students

Now that NTU has guaranteed rooms for those who need them the most, hopefully students will heave a sigh of relief.

They can also look forward to spending the next school year on campus, with the attendant freedom and convenience of being able to attend classes without a long commute.

Kudos to NTU for reversing the policy in response to the outcry.