KF Seetoh thinks a monopoly will be created.

Hawker culture is undoubtedly a vital part of the Singaporean experience.

Understandably, NTUC Enterprise’s recent proposed acquisition of Kopitiam has not gone down well with Singaporeans.

Many worry that the move will essentially erode competition, leading to higher food prices for everyday consumers.

If everyday Singaporeans’ gripes about merger aren’t enough to convince you, pay attention now — KF Seetoh, the founder of Makansutra has joined the conversation. 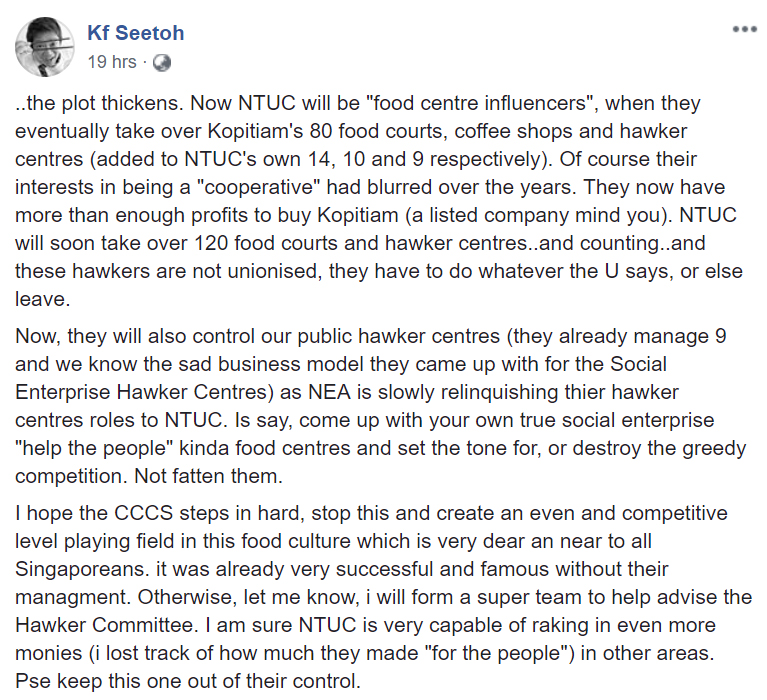 Moving towards a possible monopoly?

After the acquisition, NTUC will control 113 hawker outlets island wide — a power move that brings them one step closer to monopolising the hawker industry.

Mr Seetoh mentioned that NTUC’s status as a “co-operation” was also questioned, since it has enough profits to acquire a listed company like Kopitiam.

Hawkers affected by the move are not unionised. They either have to co-operate with the new owners or leave.

The social enterprise management model – which Mr Seetoh deems “sad” – will likely be implemented on the newly acquired hawker centres as well.

He claimed that private companies that had registered themselves as social enterprises are running their hawker centres like commercial ones.

The social enterprise model was introduced in 2015 with the purpose of keeping food prices low and ensuring that the hawker trade is sustainable.

However  he claimed that on average, hawkers in these centres pay $4,000 in rental monthly, more than the highest bid at Maxwell — a popular local hawker centre.

As a result of these high expenses, many hawkers are forced to move away from the heartlands in search of better operating grounds.

Not the first hawker centre takeover

NTUC’s acquisition of Kopitiam is the second large-scale acquisition in the hawker industry this year.

In February this year, it was announced that coffee shop chain Broadway will be acquiring all 23 coffee shops belonging to rival chain S11.

Broadway’s acquisition, which amounted to $200 million, was touted as one of the biggest acquisition of its kind.

The value of NTUC’s acquisition has not been disclosed yet. But if scale is anything to go by, NTUC’s proposed move, which involves 80 Kopitiam outlets, will likely match, if not exceed Broadway’s acquisition.

NTUC has remained rather tight-lipped about potential rising prices following their acquisition.

However, NTUC’s executive director has noted that both Kopitiam and Foodfare share the common goal of offering affordable and accessible food to the masses.

Instead, the move will allow Foodfare and Kopitiam to create a more efficient business by capitalising on the economies of scale — cost savings that comes with bulk purchasing.

The acquisition will also allow both entities to leverage on each other’s strengths and find common opportunities for collaborations.

Perhaps this will help them be more resistant to crises such as this — Yishun Park Hawker Centre is run by private operator Timbre+.

You can have your say on the matter

Will NTUC’s proposed move have a significant effect on our hawker culture?

There’s also a possibility that our hawkers will face higher rentals, and pressure to adjust the pricing of their food — which will in turn, affect everyday Singaporeans.

Singapore’s competition watchdog is currently in the midst of gathering public feedback regarding the acquisition.

You can have your say and find out more about the move here.