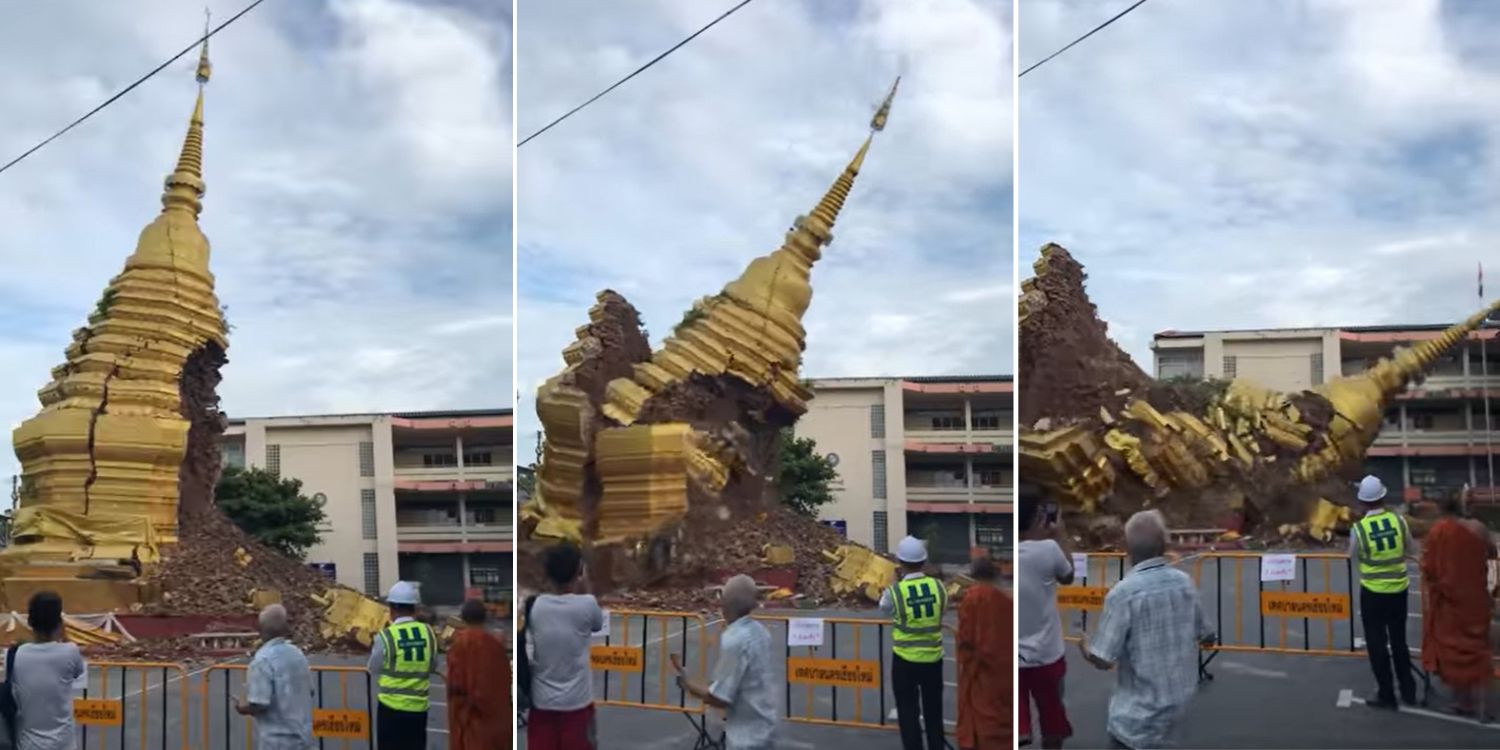 Cracks were discovered a few days ago, amid several days of heavy rain.

Civilisations with long histories tend to have structures and artifacts that are centuries-old and treasured by generations.

Thus, when something like that is destroyed, the heartache must be immense for people of that culture.

That’s what devotees of a 522-year-old pagoda in Chiang Mai must have felt when it suddenly collapsed after heavy rain. 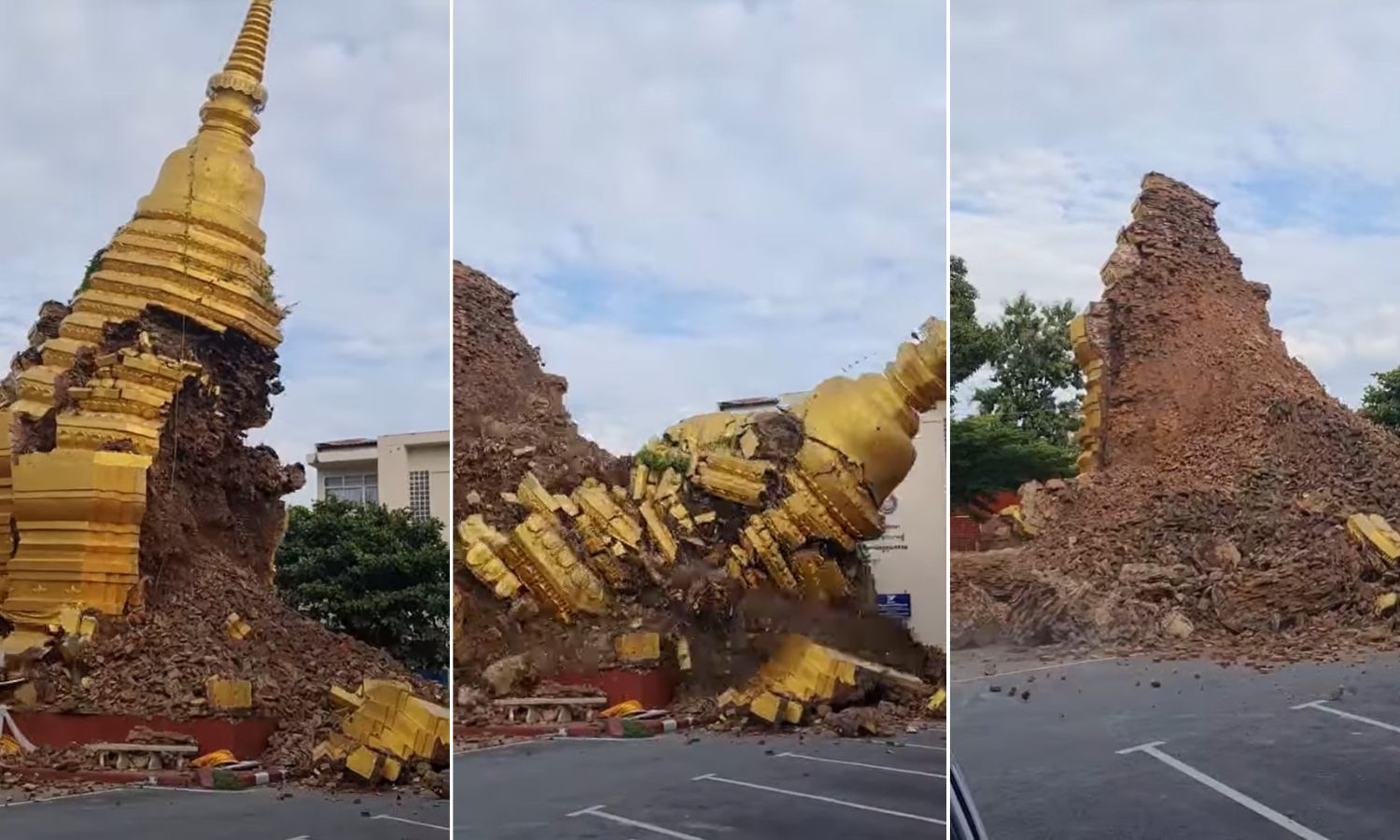 Donations are now being sought to fund its restoration.

The heartbreaking moment of its collapse was captured on a few videos posted on Facebook.

One of the videos, posted by Wat Sri Suphan’s Facebook page, shows the the pagoda tilting dangerously before falling down and disintegrating completely.

Another video taken from farther away, posted by a netizen named Nonthakan Surat, shows bystanders gasping in shock as the pagoda crumbles before their eyes.

One old man even scrambles to get away from the tumbling pagoda, possibly in fear that it might fall on him.

Monks are also seen witnessing the stunning incident, with one man clasping his hands as a gesture of reverence. 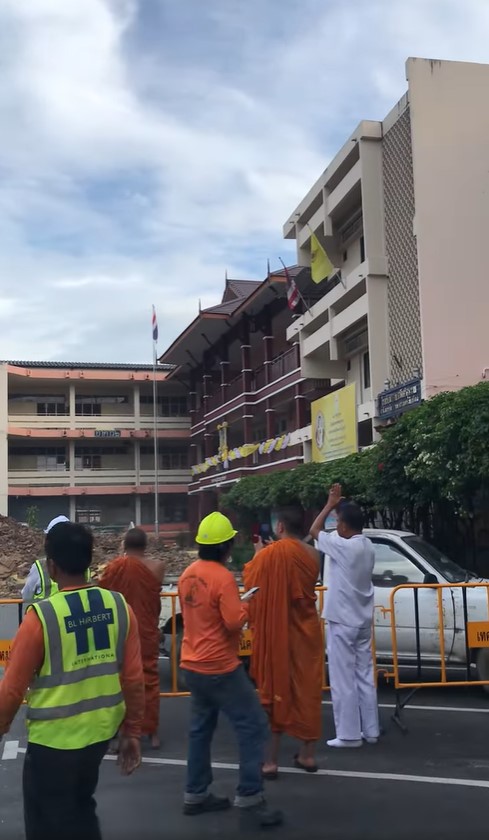 While the pagoda’s collapse was devastrating, thankfully no injuries were reported.

The school that’s right next to the structure was also untouched.

Wat Sri Suphan’s abbott was quoted by The Thaiger as saying that it was restored 40 years ago, but cracks started to appear again in recent years.

Cracks appeared amid days of rain

Notably, cracks were discovered in the structure a few days ago, amid several days of heavy rain. The pagoda, which was taller than a three-storey building, also started leaning to the side.

After more rain, it started leaning more and more, and the area was cordoned off in fears that it would collapse. 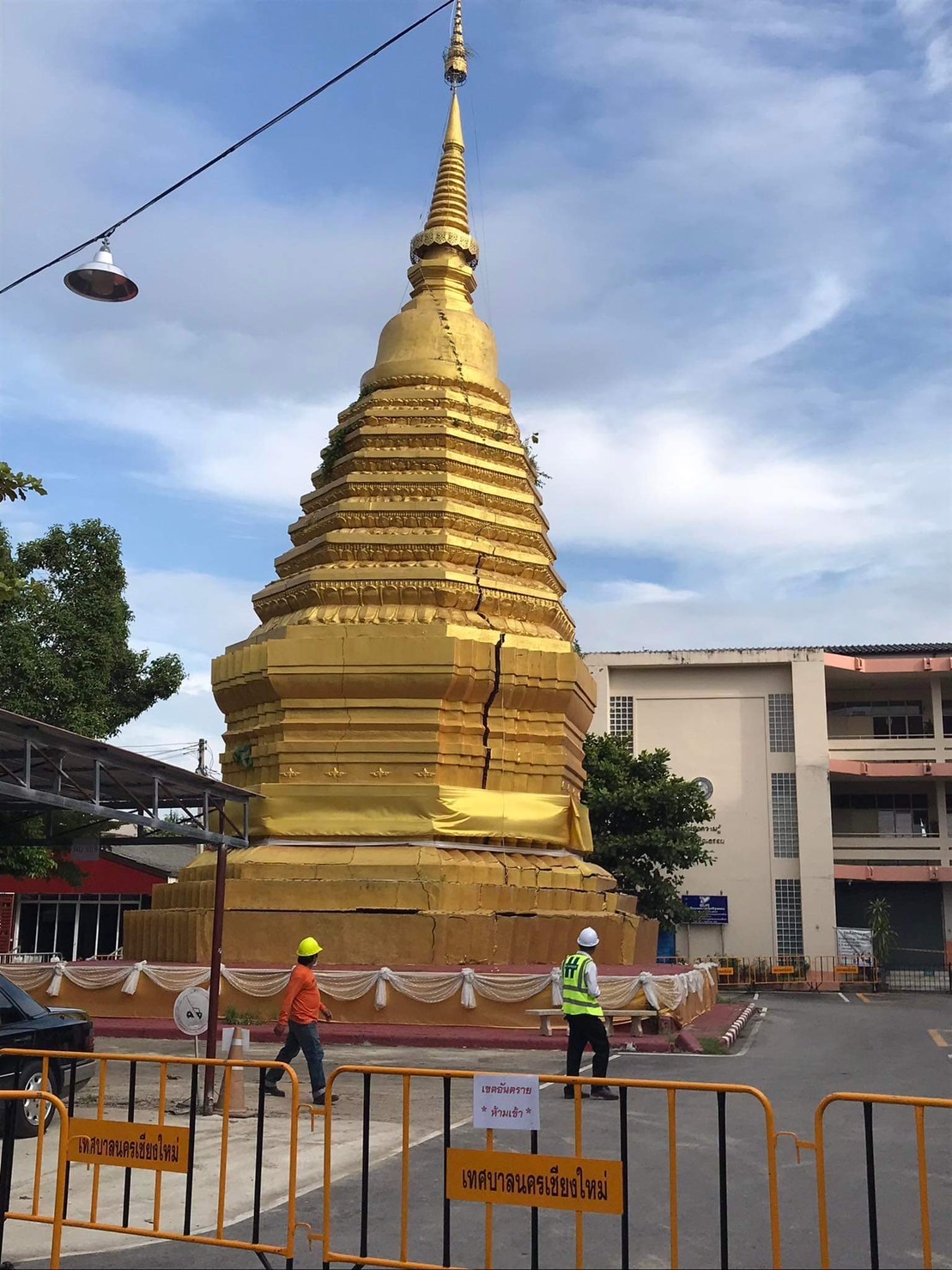 Sometime between that the eventual collapse, part of the pagoda hived off by the crack fell off, destabilising the structure even more. 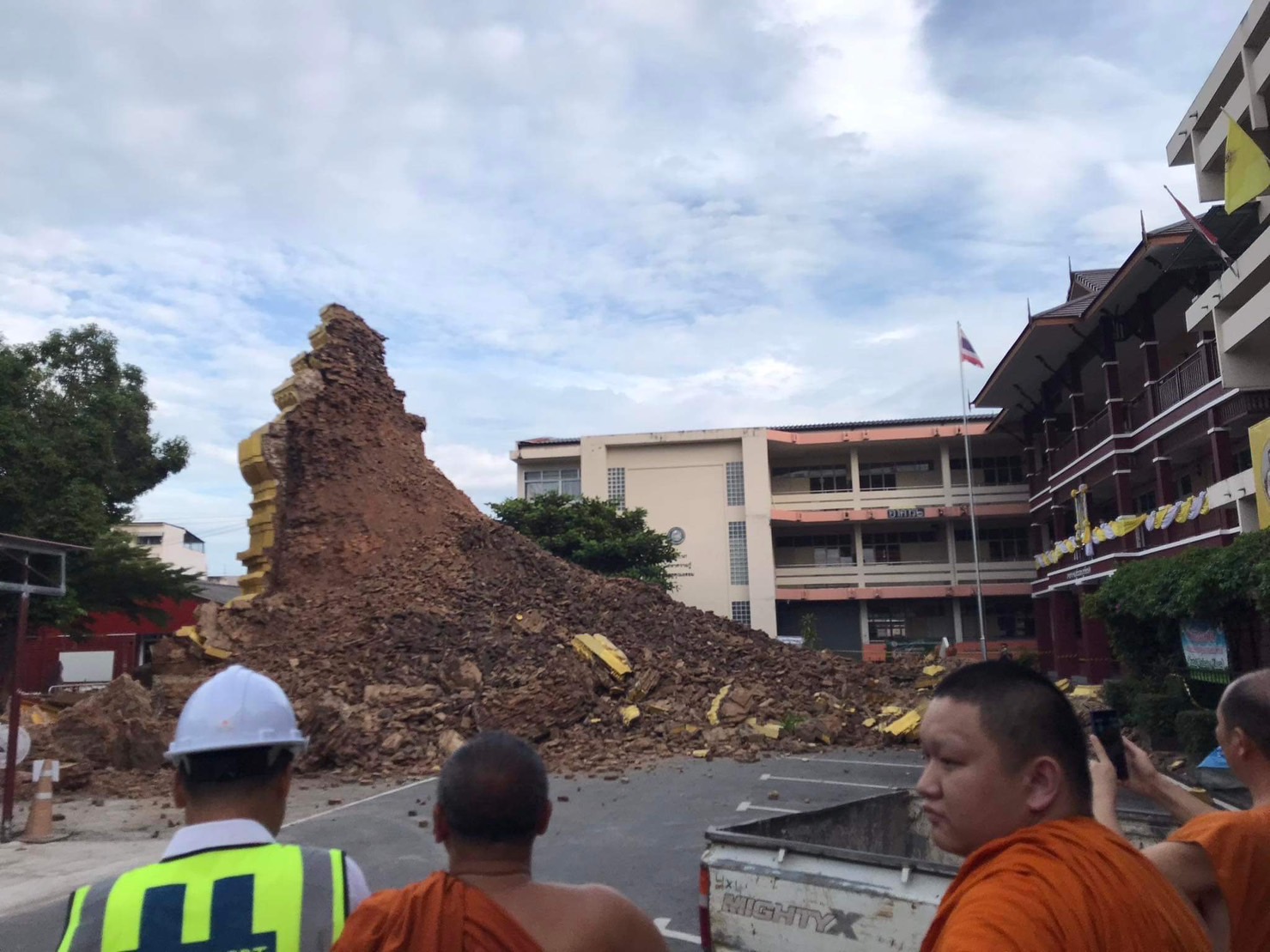 The pagoda’s destruction is all the more sayang because it was a part of Thailand’s rich history.

According to Tourism Thailand, Wat Si Suphan was built in the year 1500 — making it an astonishing 522 years old.

When constructed, King Mueang Kaeo of the Mangrai dynasty was on the throne.

Given the age of the pagoda, it was definitely treasured by the community.

It’s thus no wonder that Buddhist monks from the temple held a sombre ceremony to bid it farewell on Friday (30 Sep). 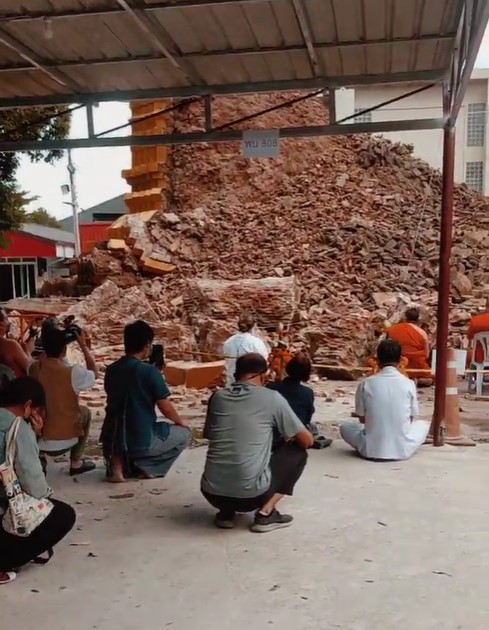 As the pagoda was a stupa — meaning it contains religious relics — its collapse meant that many statues of Buddha and other antiques were found in the rubble.

The artefacts discovered will be registered by the 7th Regional Office of Fine Arts in Chiang Mai and given to the temple for conservation, reported the Bangkok Post.

As for the cause of the pagoda’s collapse, Thai Culture Minister Itthiphol Kunplome told the Bangkok Post that initial investigations showed that the breakdown of its external surface had damaged the inner brick core.

Additionally, the weight of rainwater that had collected in cracks on its surface contributed to the collapse, said the Fine Arts Office.

The Culture Ministry has called for an expedited inspection so the pagoda can be restored.

The Fine Arts Office will study the structure and draft restoration guidelines together with temple chiefs.

However, a hitch in the restoration process would be that the pagoda wasn’t a registered ancient building, Wat Si Suphan’s abbott said.

That means there’s no budget to take care of it.

That’s why the temple has launched a donation drive to help pay for the pagoda’s rebuilding.

Thais who’re interested in giving may scan a QR code on their Facebook page to make a cash transfer, indicate it’s for the pagoda and send a screenshot of the transfer to their Facebook. 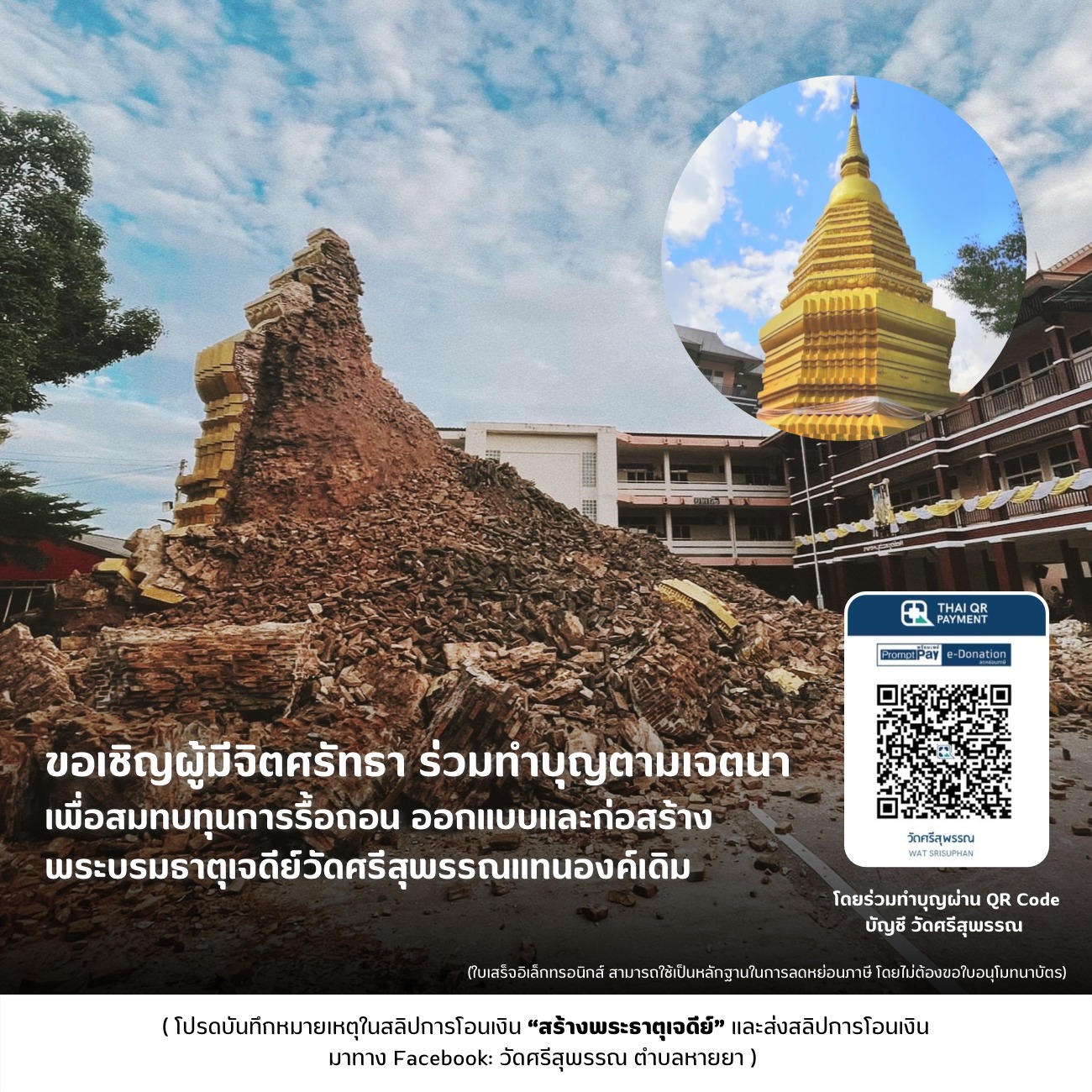 Judging from the hundreds of comments on their Facebook post, scores of Thais have already contributed to the fund-raising efforts.

A heartbreaking loss for the community

The wrecking of a beloved ancient monument must have shattered the devotees who were used to seeing it every day.

Now, the ardous process of rebuilding it must start, with the community’s help.

Let’s hope the pagoda will be restored to its former glory very soon.