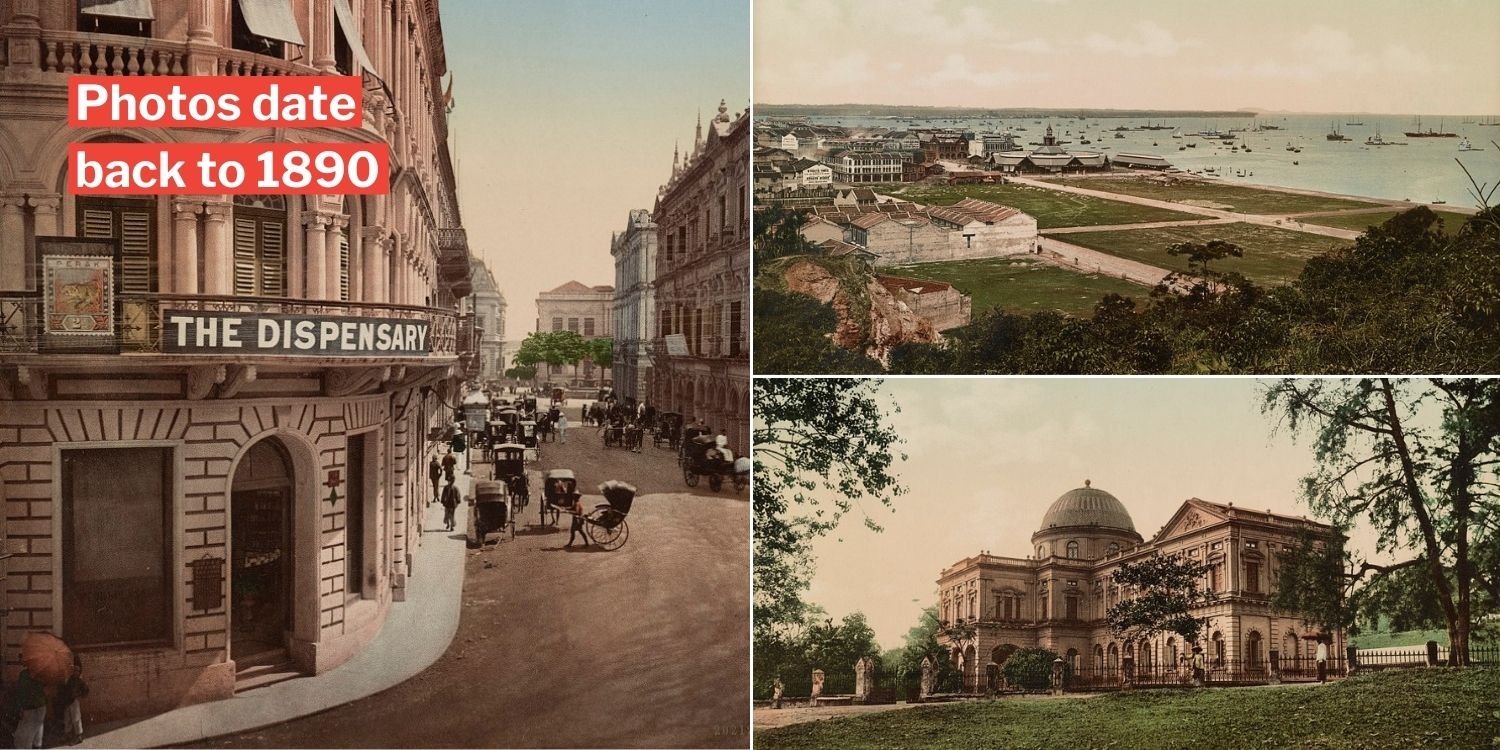 The large files are suitable for printing or framing up.

Singapore’s known to be a modern city with a relentless pace of change, and the old quickly makes way for the new. Even Singaporeans in their 20s and 30s can recall old hangouts that are gone forever.

For some, this ruthless discarding of the old has evoked a sense of curiosity over what Singapore was like before the congested roads and gleaming skyscrapers.

A foreign source – the United States Library of Congress – has satiated a little of that curiosity with free downloadable images of 19th-century Singapore. This treasure trove was discovered by Singaporean academic Cherian George, who posted on Facebook telling us how to access it.

Better yet, the coloured photos are available in hi-resolution TIFF files that are as big as 130MB, suitable for printing and framing up at home.

Gazing at the photos on the website, you’ll realise that it’s as if the photos have been put through a vintage Instagram filter.

However, as they’re all dated as the year 1890, #nofilter is needed as these are actually vintage photos.

And they were taken so long ago that it’s unlikely anybody who’s alive now will have taken in these scenes with their own eyes.

Singapore landmarks in the 19th century

Singaporeans will recognise local landmarks as you’ve never seen them before, like St Andrew’s Cathedral, but minus Peninsula Plaza and Hotel Swissotel towering over it. 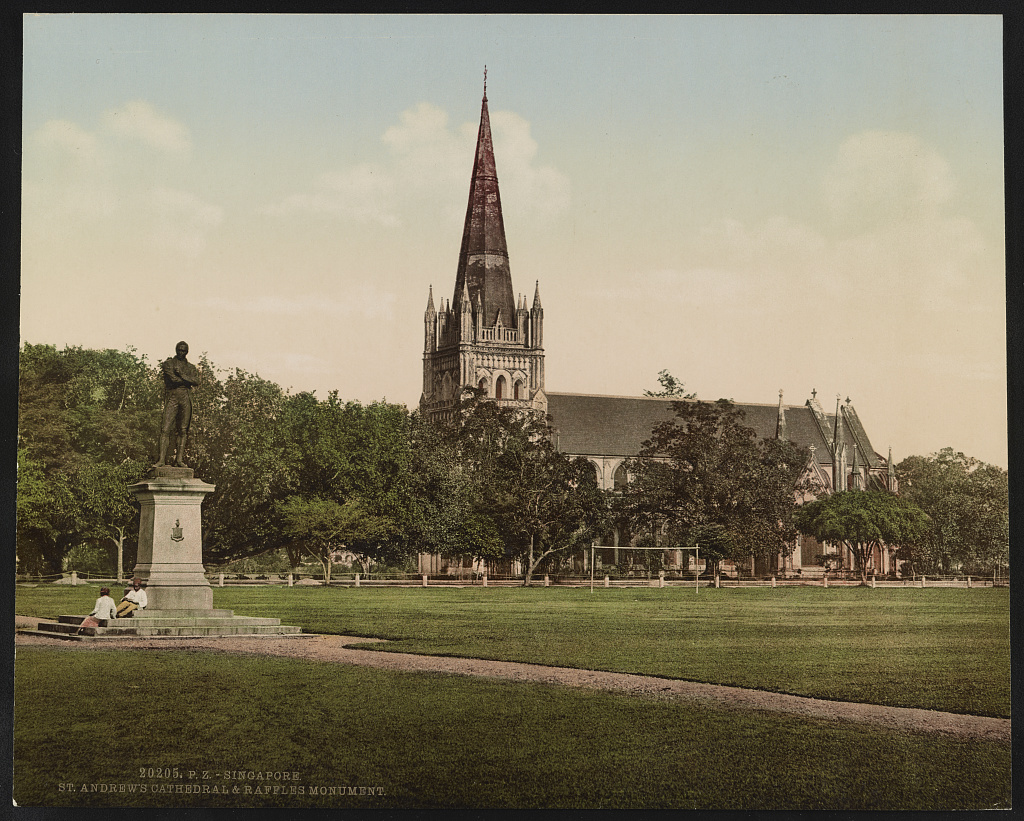 You’ll notice that the Sir Stamford Raffles statue is curiously located in the middle of the Padang. According to Singapore Infopedia, it was actually originally erected in 1887 at the Padang, but moved in front of Victoria Concert Hall in 1919.

Without the distraction of Shenton Way skyscrapers blocking the sky, you can clearly see the Dalhousie Obelisk to the left, the first public statue in Singapore. It was erected in 1851. 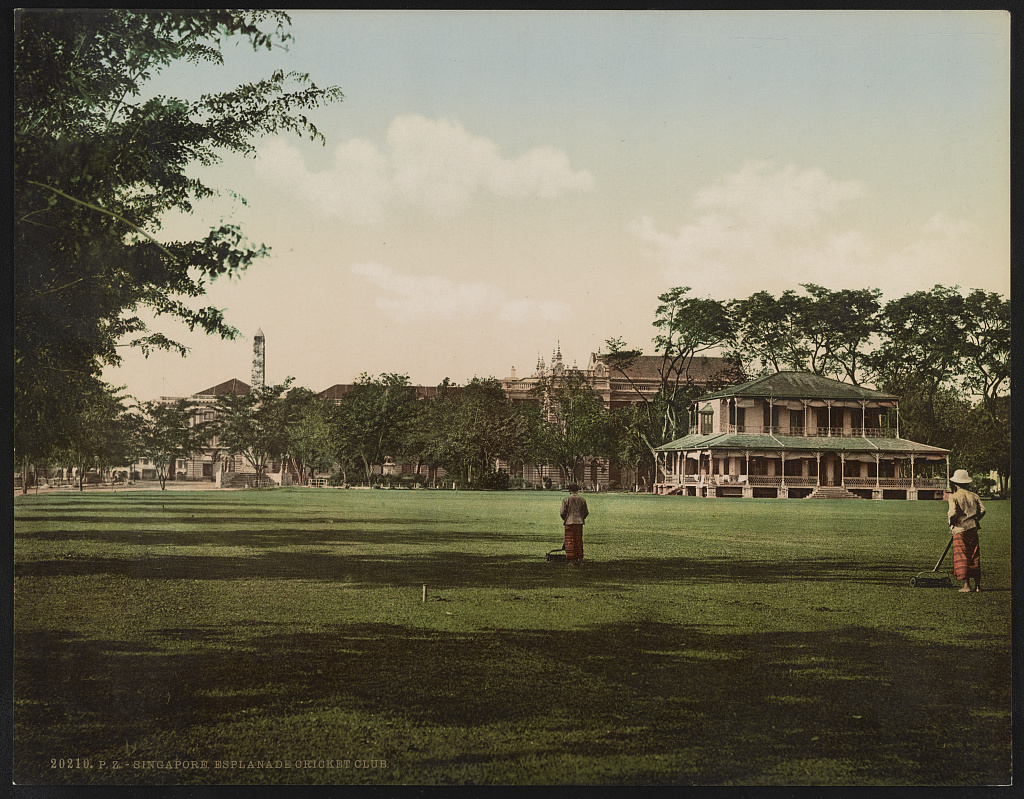 Farther down Empress Place, there’s a shot of Cavenagh Bridge with what was called the Stamp Office.

What is now the Asian Civilisations Museum used to be called the Government Office, as it housed colonial offices like the Stamp Office from 1867. Cavenagh Bridge itself used to be open for carriages and rickshaws, before it was converted into the fully pedestrianised bridge that it is now. Farther into what is now the Central Business District, we see an unrecognisable Battery Road, then a dirt road devoid of petrol-guzzling vehicles. 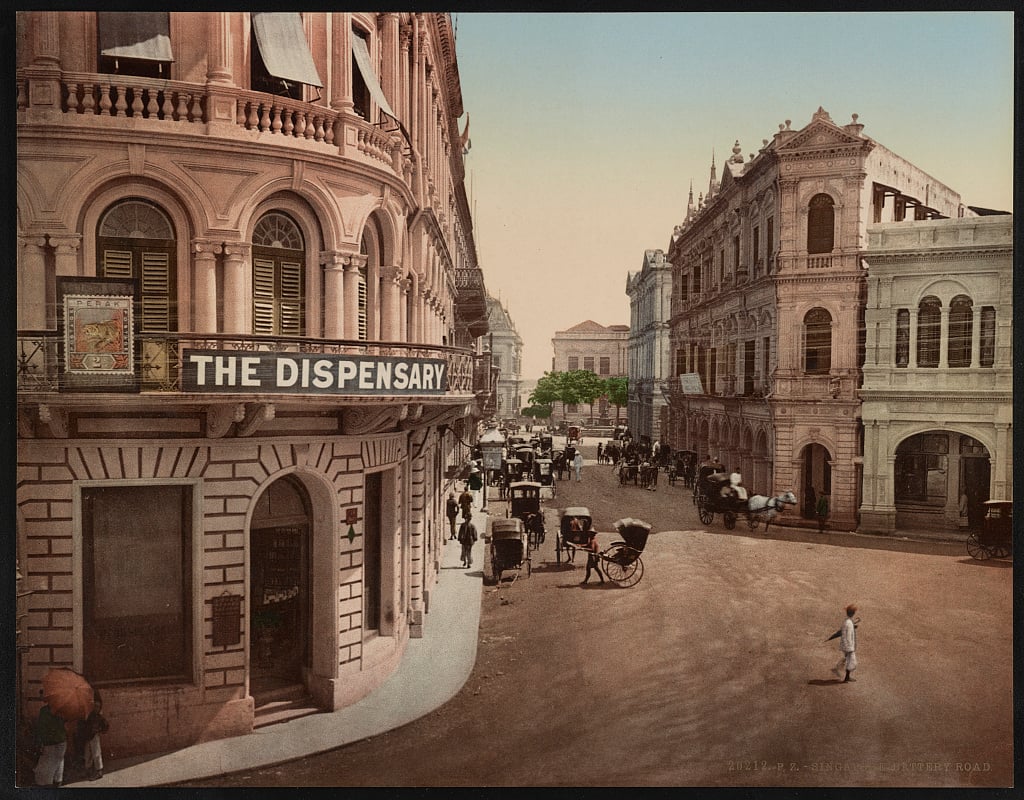 Battery Road is one of the earliest roads in Singapore, built in the 1820s.

Famous buildings there were the Chartered Bank Buildings, Tan Kim Seng Fountain (later moved to Esplanade Park) and the Red House that contained the Medical Hall (demolished in 1970). 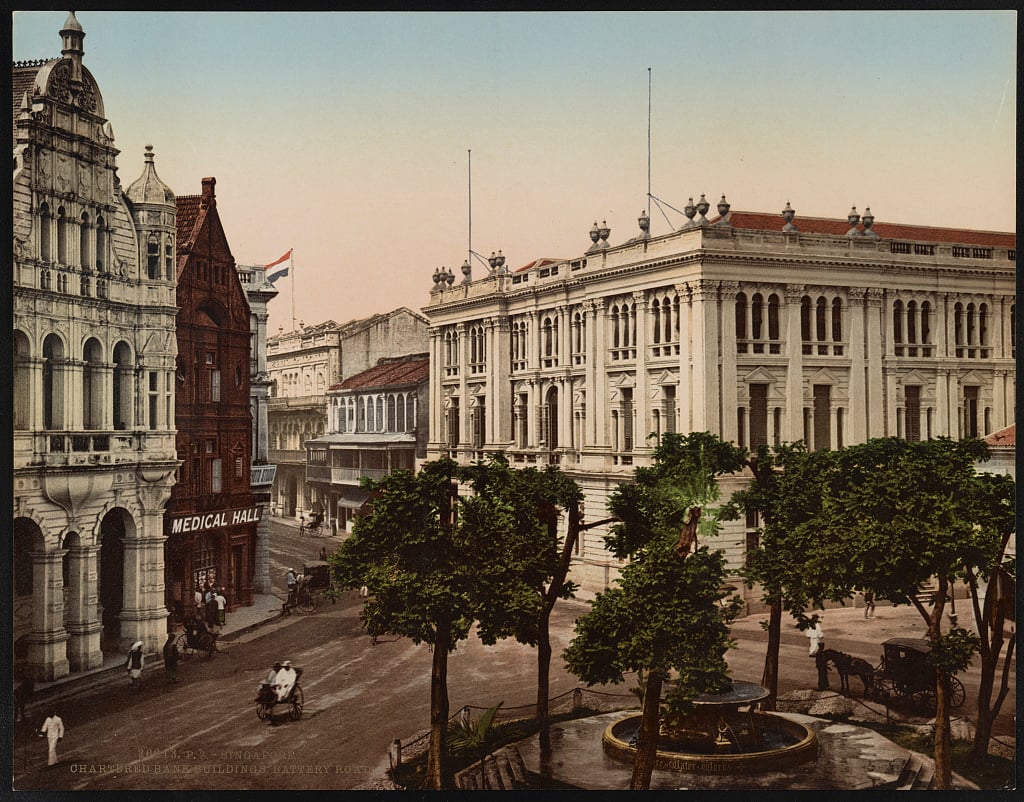 At nearby Collyer Quay, named as such in 1864, we can see goods being loaded and unloaded from sampans at the sea wall. They’re a far cry from the huge container ships in our port today. 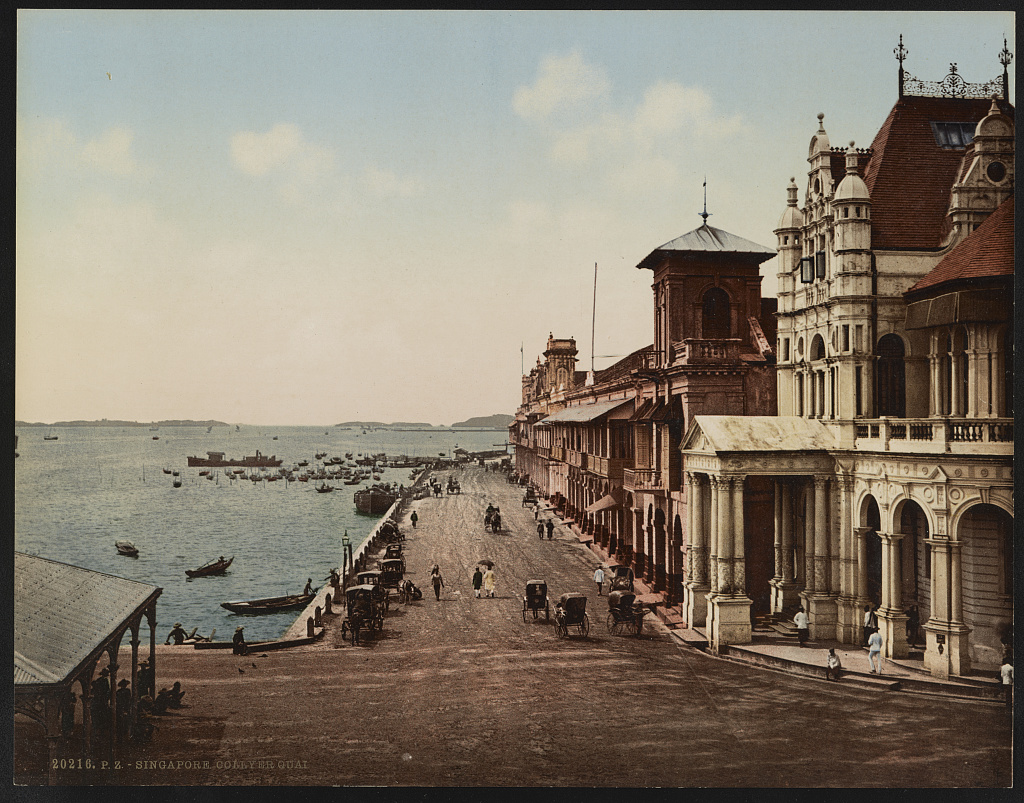 Another iconic building that’s featured is the National Museum, which opened in 1849 as the Raffles Library and Museum. There’s also a photo of the lush greenery outside Government House, which was built in 1869. It’s now called the Istana, and is the official residence of the President. 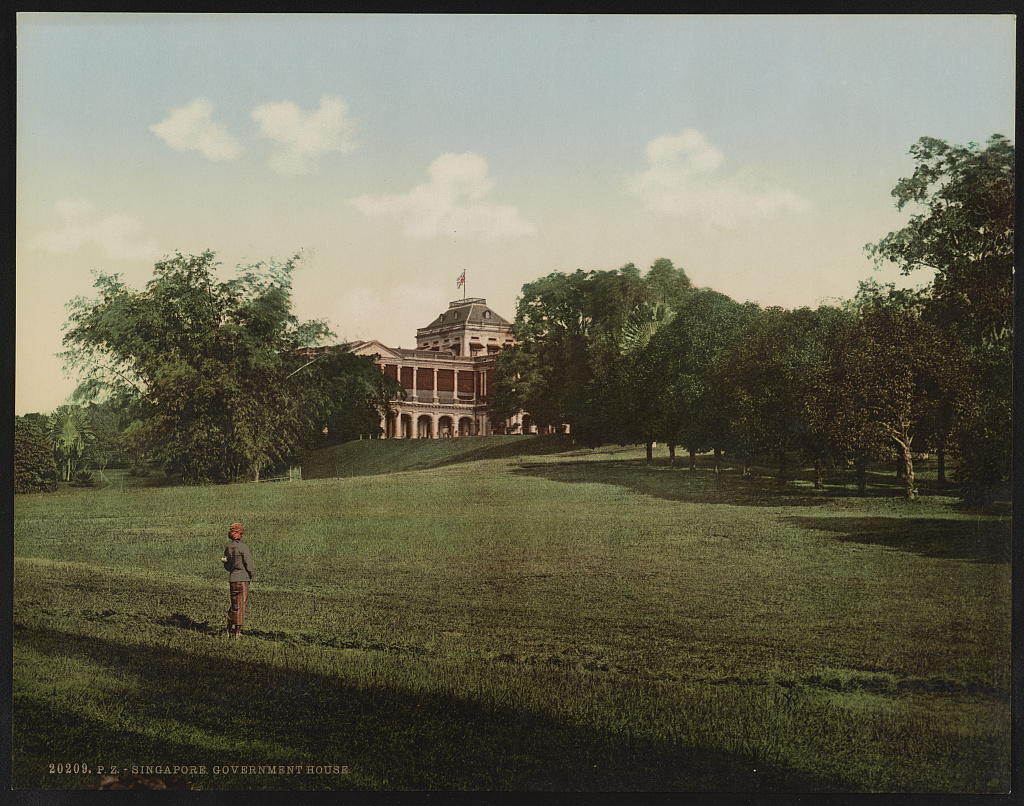 Located on busy South Bridge Road, the Kling Temple was Singapore’s 1st Hindu Temple, and a wood-and-attap version was built in 1827. The present brick structure came to being in 1843.

Now we know it as the Sri Mariamman Temple. 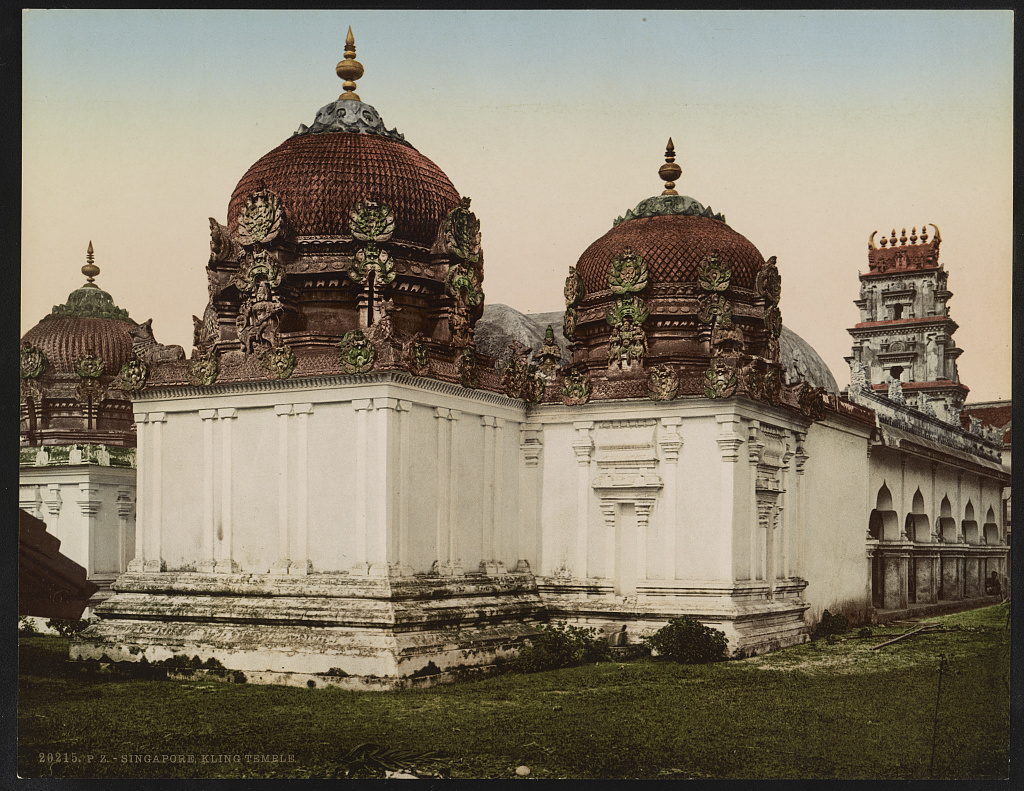 Finally, Tanglin Road is known as an atas neighbourhood near Orchard filled with big bungalows and embassies.

In 1890, though, it was a small road heavily lined with bamboo trees, judging from this photo that includes a rickshaw puller and his passenger. 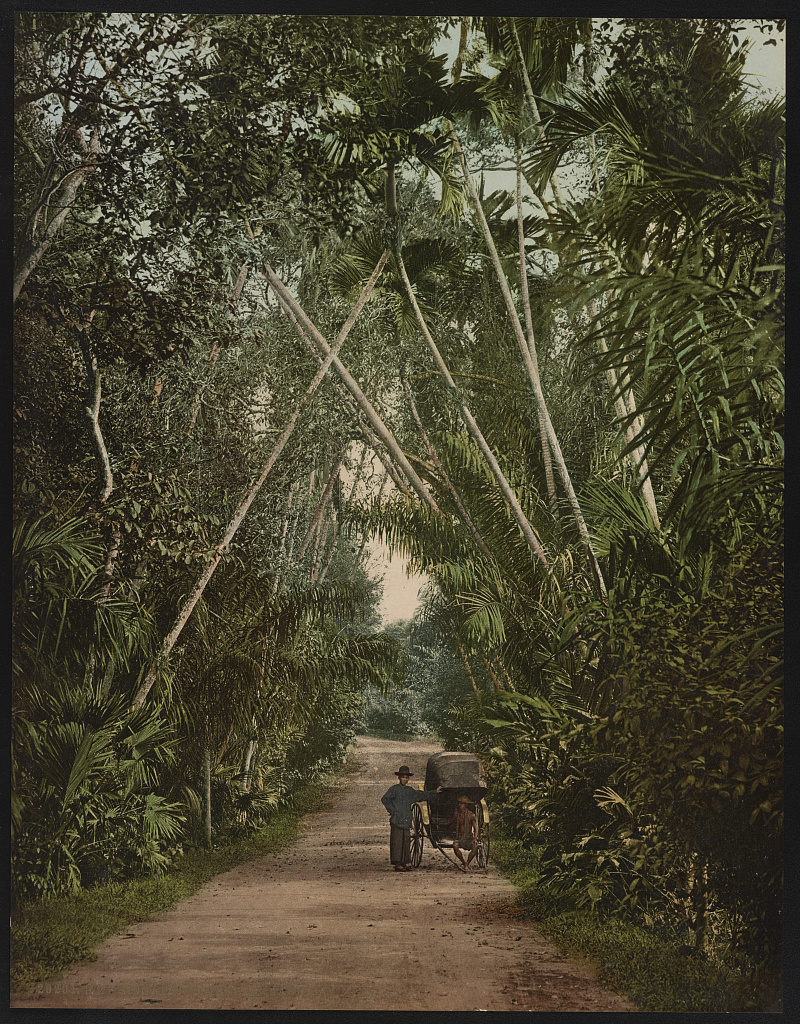 Finding the photos is easy

To find the photos, it’s an easy as visiting the US Library of Congress website and typing in “Singapore” in the search bar.

Be sure to select “Photos, Prints, Drawings” in the category field on the left.

After clicking the magnifying glass icon, be sure to refine your results by checking those that are available online. 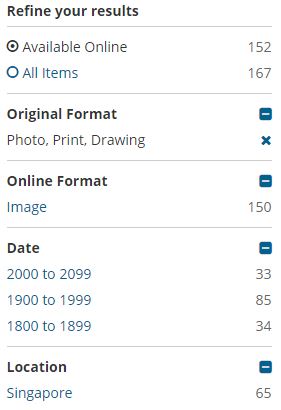 To narrow down your search even further, you can choose photos according to date and location, e.g. 1800 to 1899, and Singapore.

To download the photo, there’s a link below where you can choose 4 resolutions. 3 of them are JPG files, and there’s an option to download it as a hi-res TIFF file that’s as large as 130MB.

A dose of nostalgia for Singapore’s past

Upon gazing at these retro photos, one can’t help but wonder what it was like living in Singapore in the 19th century.

However much we may crave for a bygone era, though, we shouldn’t dwell on it, as we can only imagine how people lived at the time.

Featured images adapted from US Library Of Congress.