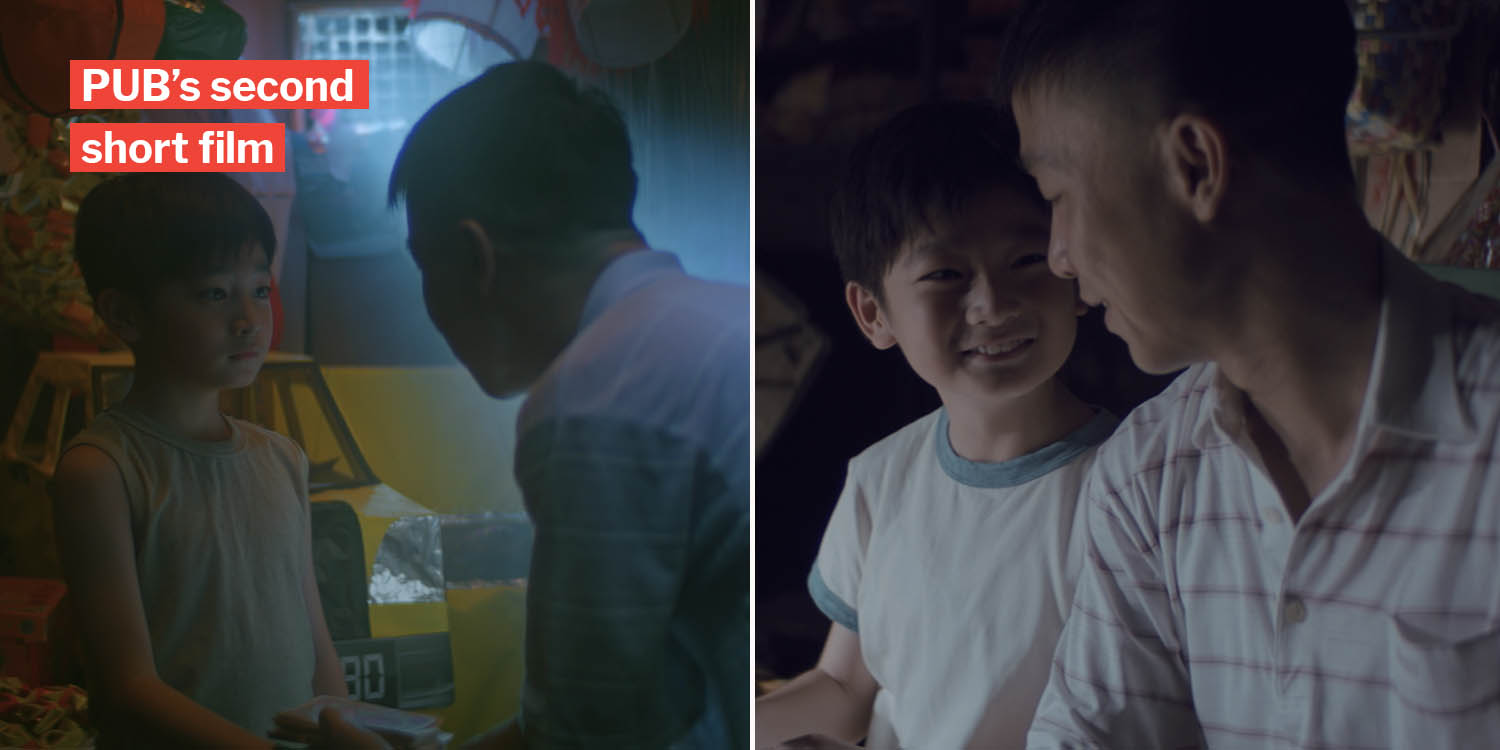 PUB, Singapore’s National Water Agency, is what brings us our water supply, and apparently, heartwarming short films too.

Last year, they released a tear-jerking short film to celebrate Hari Raya called ‘Kinship’. The 6-and-a-half minute video touched many Singaporeans’ hearts as it told the story of 2 brothers.

This year, PUB released yet another heart-wrenching short film, ‘The Frog Prince’. The 9-minute film celebrates the Chinese tomb-sweeping festival Qing Ming, which has sadly been disrupted by Covid-19 social distancing measures. 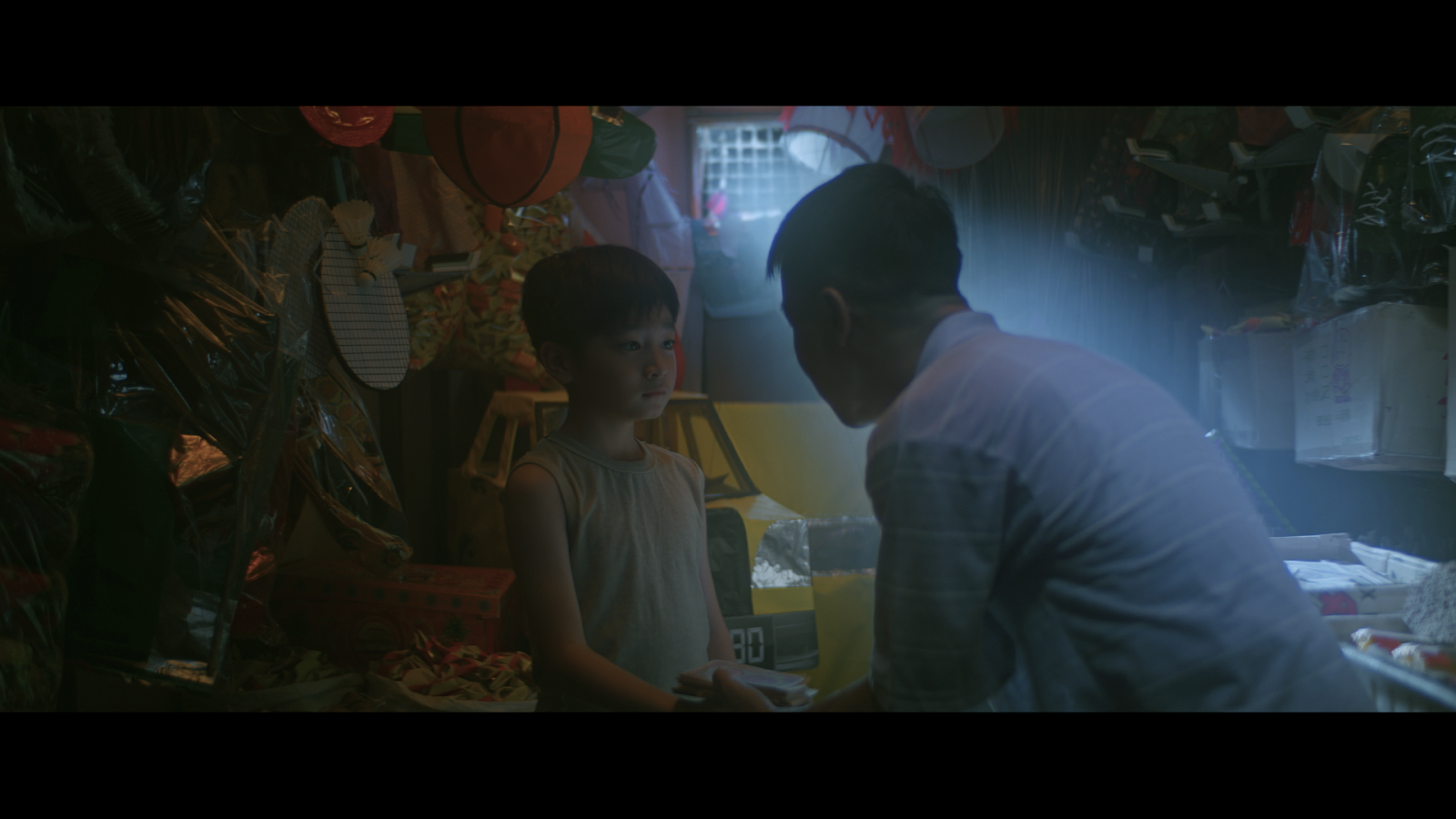 Brought to you by the same creative team behind ‘Kinship’, ‘The Frog Prince’ also revolves around the main theme of family, but focuses on filial piety instead.

It captures the story of a young boy who just wants to be like other kids, but learns through difficult experiences that sometimes, being different can be a good thing.

Warning: Be prepared for spoilers, but you still have to watch the short film here to find out how everything turned out.

The film features beautiful and poignant shots and scenes throughout, just like this one of Boon’s face illuminated by the burning joss paper offerings. 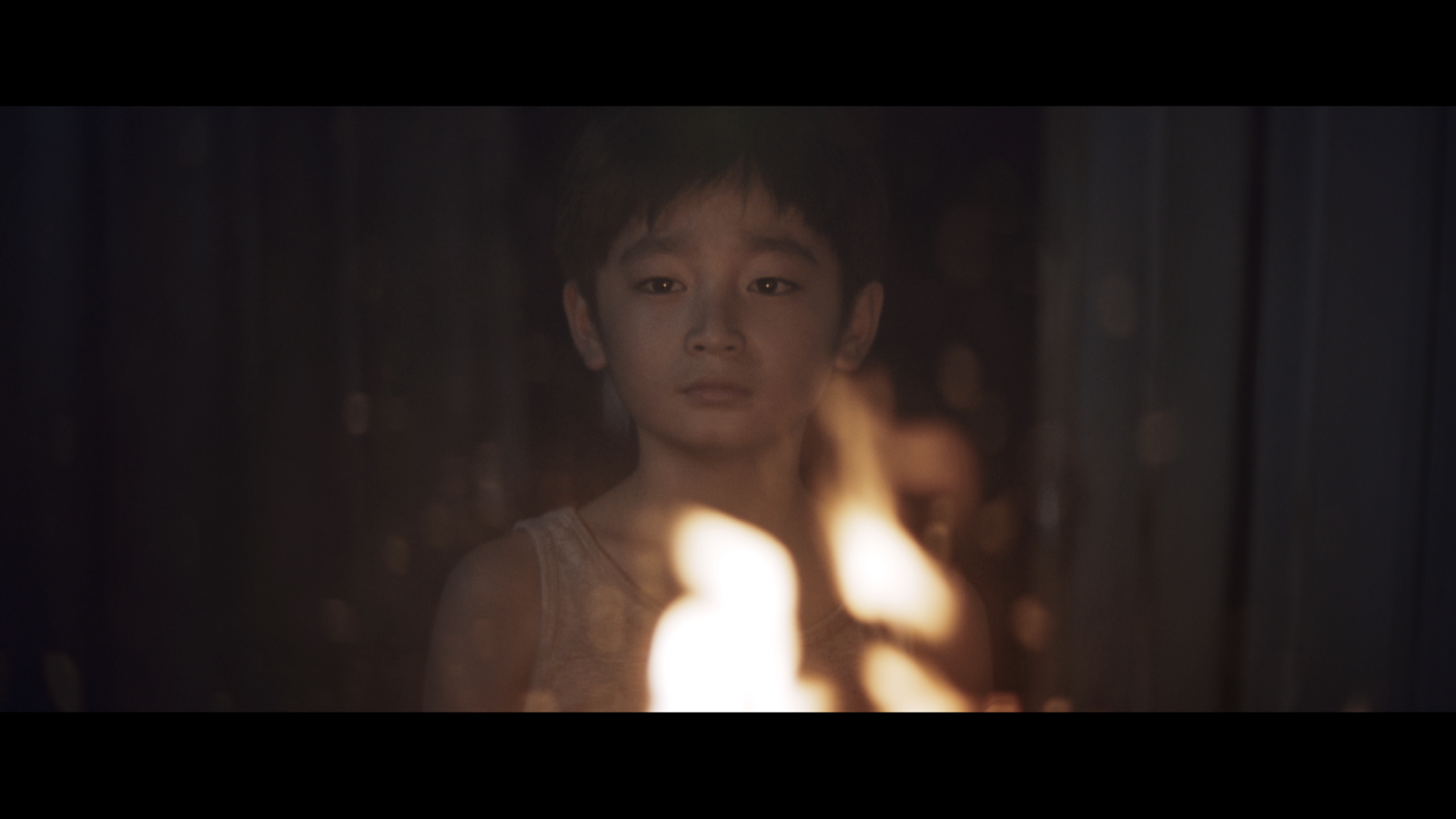 The short film opens with the family of 3 burning joss paper outside. The father, Ah Cai, asks his son, Boon, to come help – it’s going to rain soon.

As predicted, it’s soon pouring, and the humble family are busy collecting rainwater to use for watering plants and washing the corridor, among other chores. 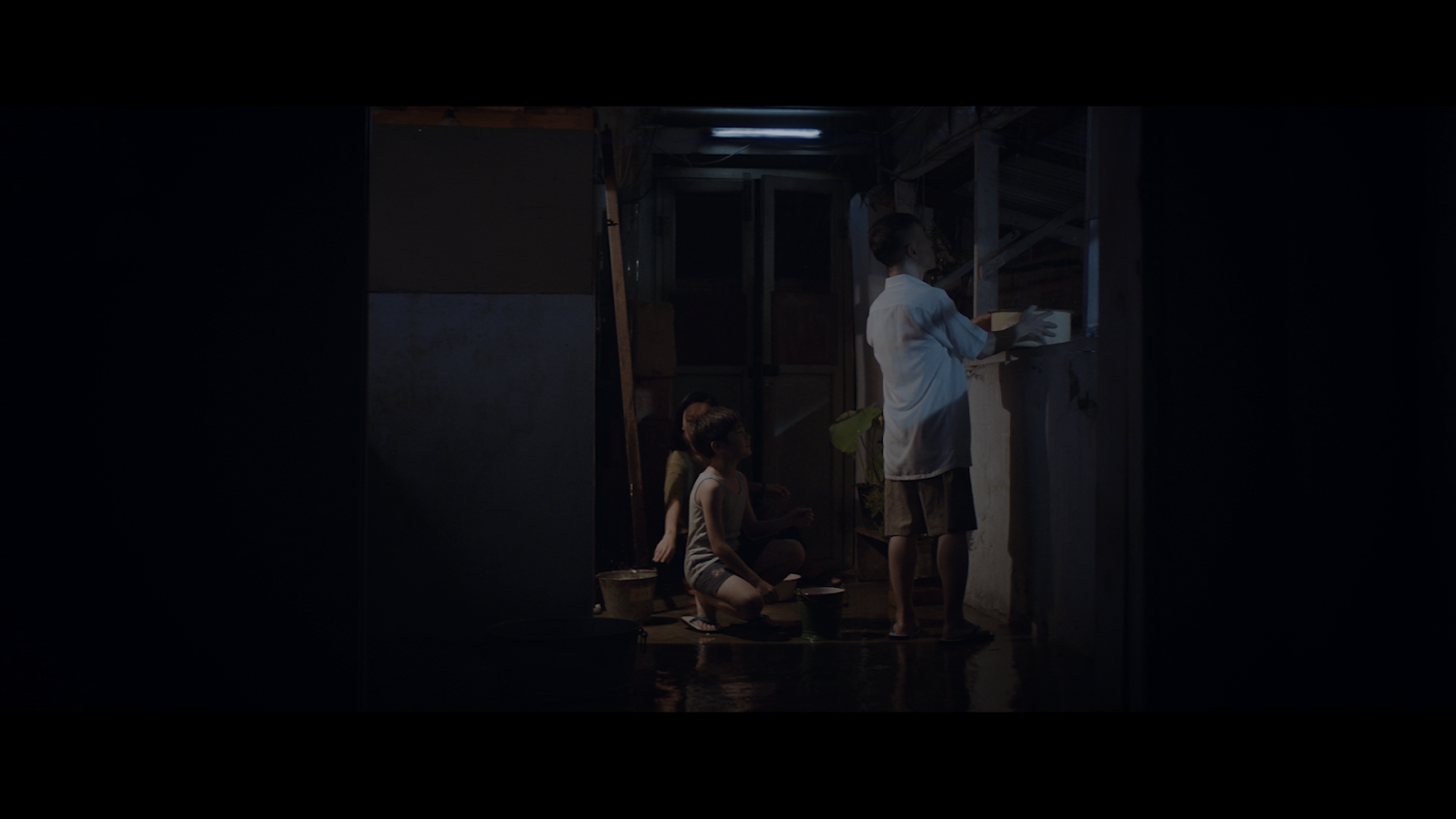 Boon even manages to fill a bucket for his pet frog, and labels it “The Frog Prince’s Swimming Pool” in Chinese.

It’s clear that they’re not the most well-off, but they’re resourceful and do what they can to live a decent life.

They own a Kim Zua business, selling joss paper and offerings paraphernalia. 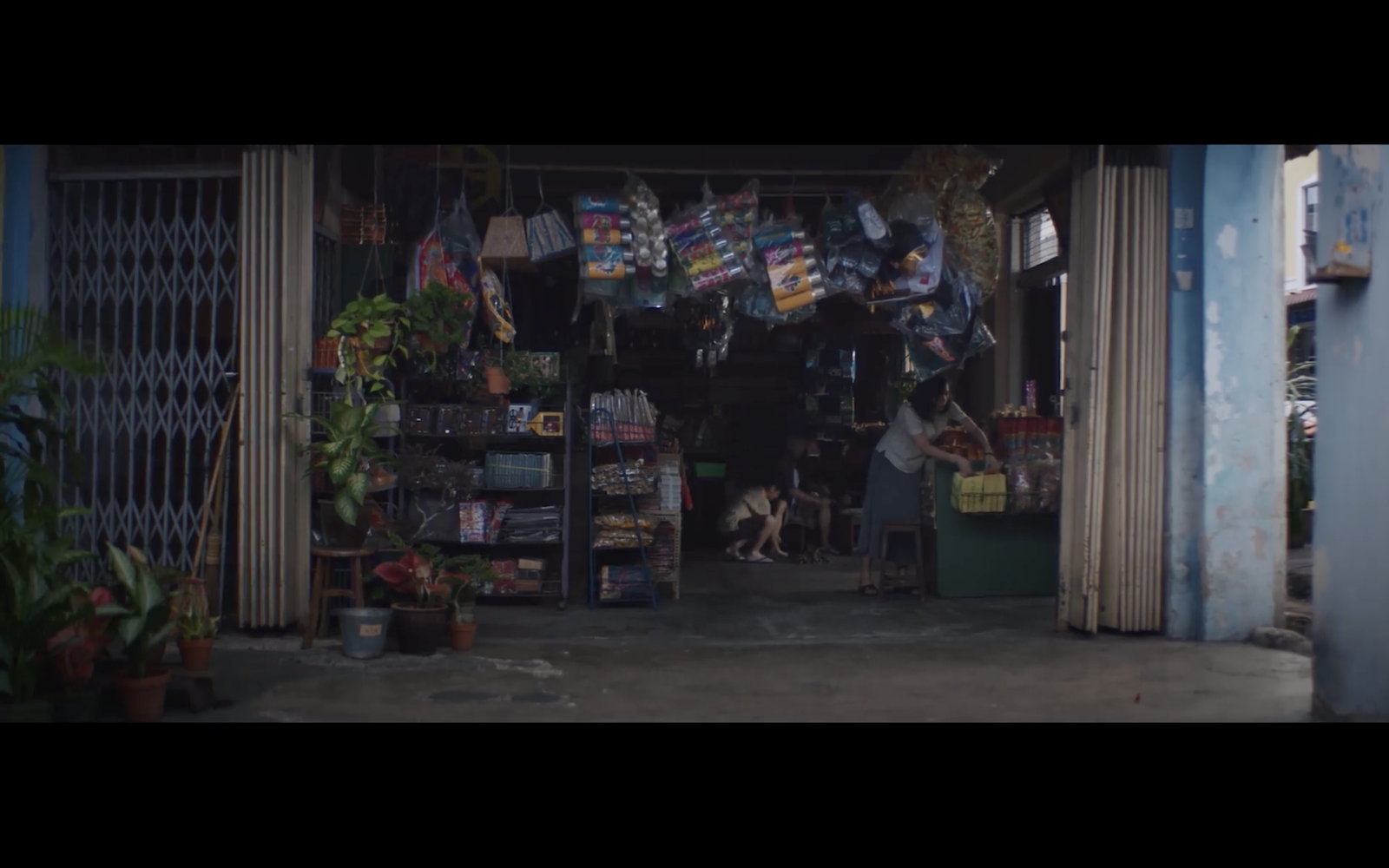 They work hard, together as a family, folding paper ingots at night as they catch the evening television programme together.

If you look closely, you’ll notice PUB’s previous mascot, Bobo the Elephant, on the television. What a nostalgic Easter egg! 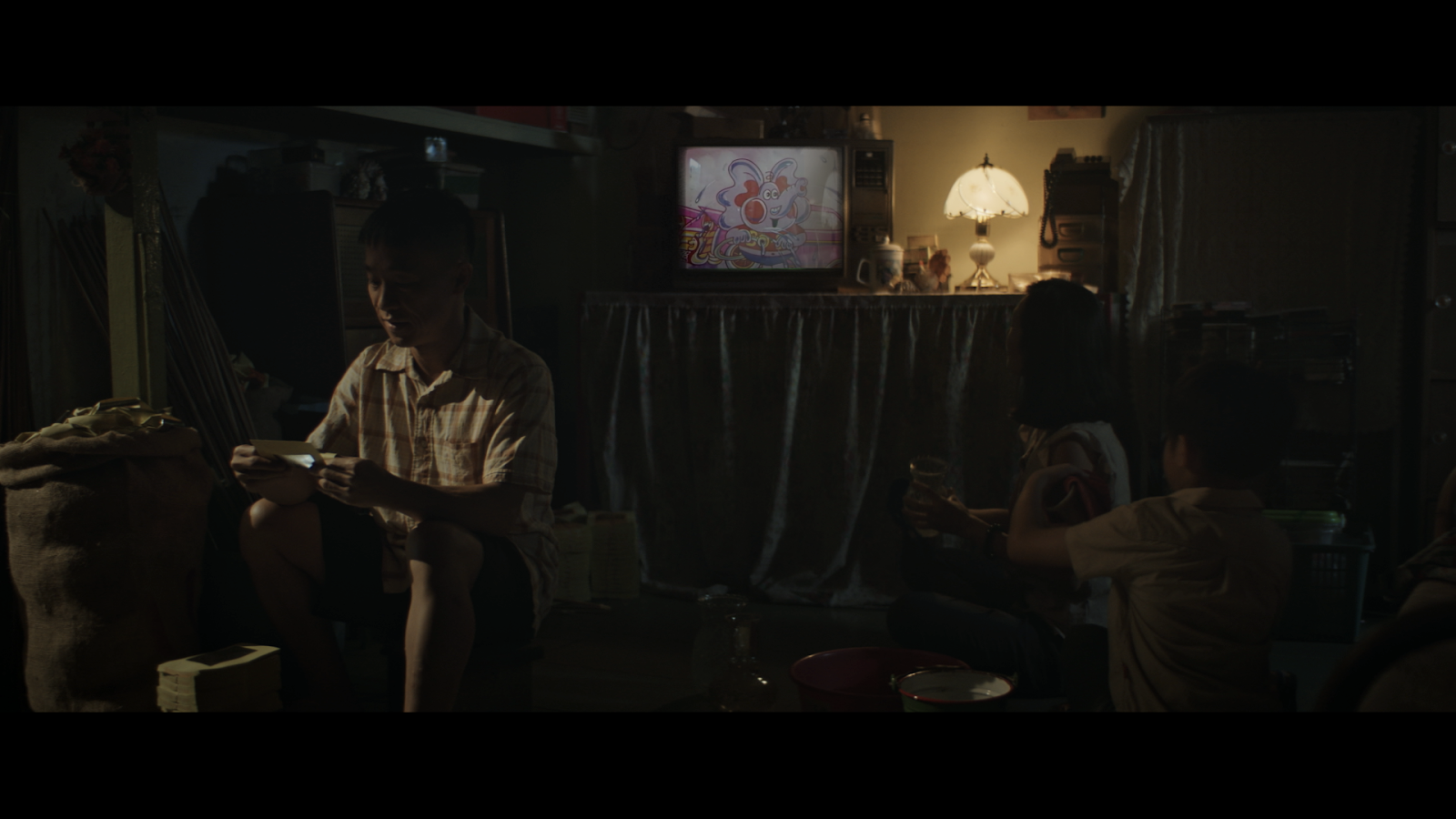 Everything is calm, and the family seem content with their simple lives.

‘Richest’ family in the neighbourhood

Boon’s happy with his ‘frog prince’, but inevitably gets jealous when he realises that he doesn’t have new toys or even bicycles like the rest of the kids do.

One of the neighbourhood kids rides past his family’s shop on a shiny new bike while he stares longingly at it. He asks his father why they can’t afford one but of course, his father tells him to just use his legs. That’s what they’re for, right?

Boon still can’t let it go, and asks why his family doesn’t seem to have any money for new toys, or even clothes. Ah Cai immediately corrects him, assuring him that they aren’t poor by any means.

Who says we don’t have money? We don’t just have money, we have riches and treasures too!

According to him, they’re the richest family in the neighbourhood. Still, Boon doesn’t seem to be convinced.

Boon gives in to temptation

Even with his father’s reassurance, Boon still longs for a bicycle.

He’s just a kid, and kids make uninformed, impulsive decisions, which is why he gives in to temptation and takes a seemingly abandoned one. 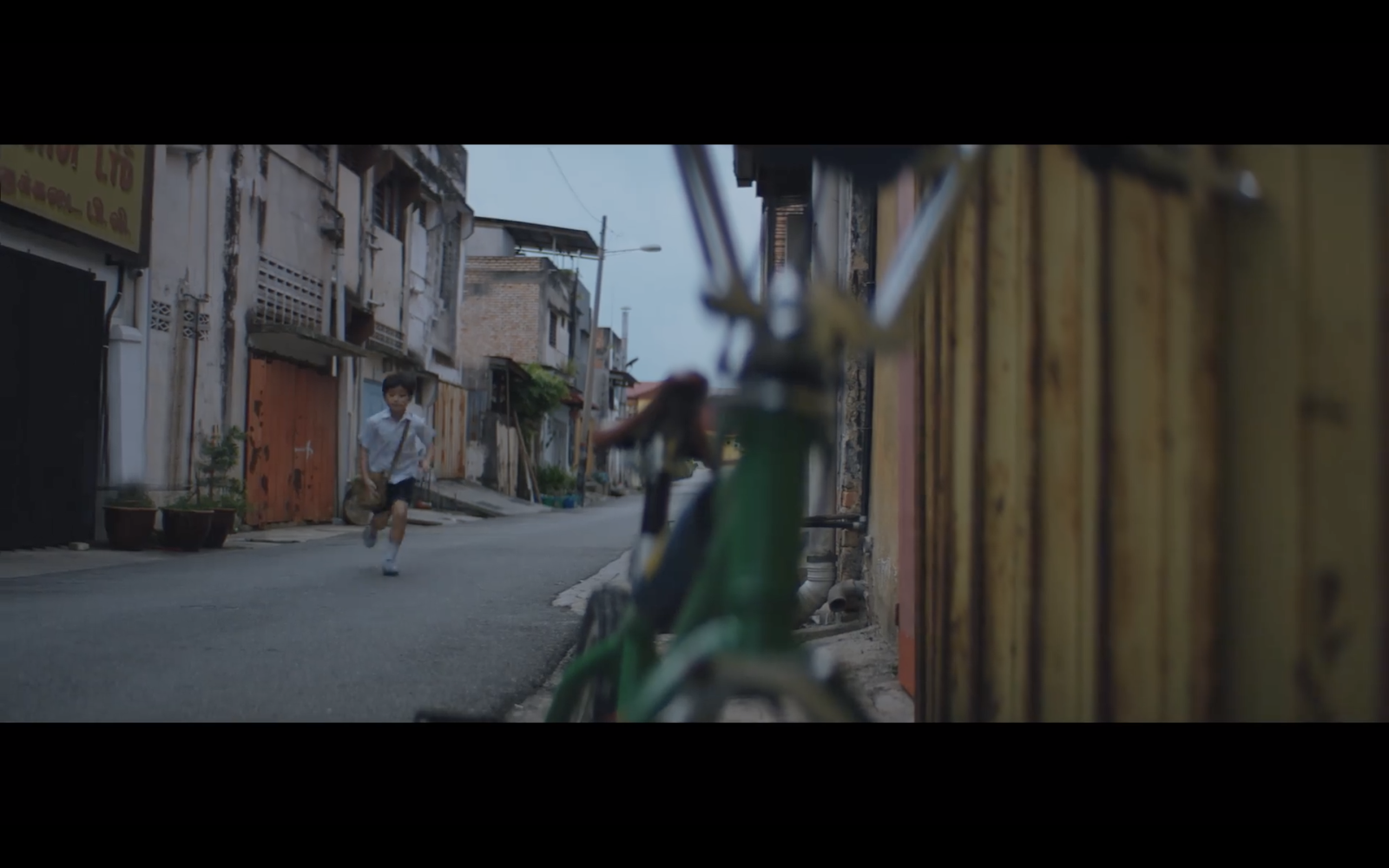 Unfortunately, it turns out to belong to a schoolmate’s brother, and he gets called down to the principal’s office for a scolding.

Ah Cai is called down too. He gets lectured by the principal too, heartbroken that his son doesn’t seem to have picked up the values he’s passed on.

Boon runs away in the heat of the moment

Later at home, Boon gets a vicious caning. Tears cascade from his face as Ah Cai brings the bamboo cane down on his arm again and again. 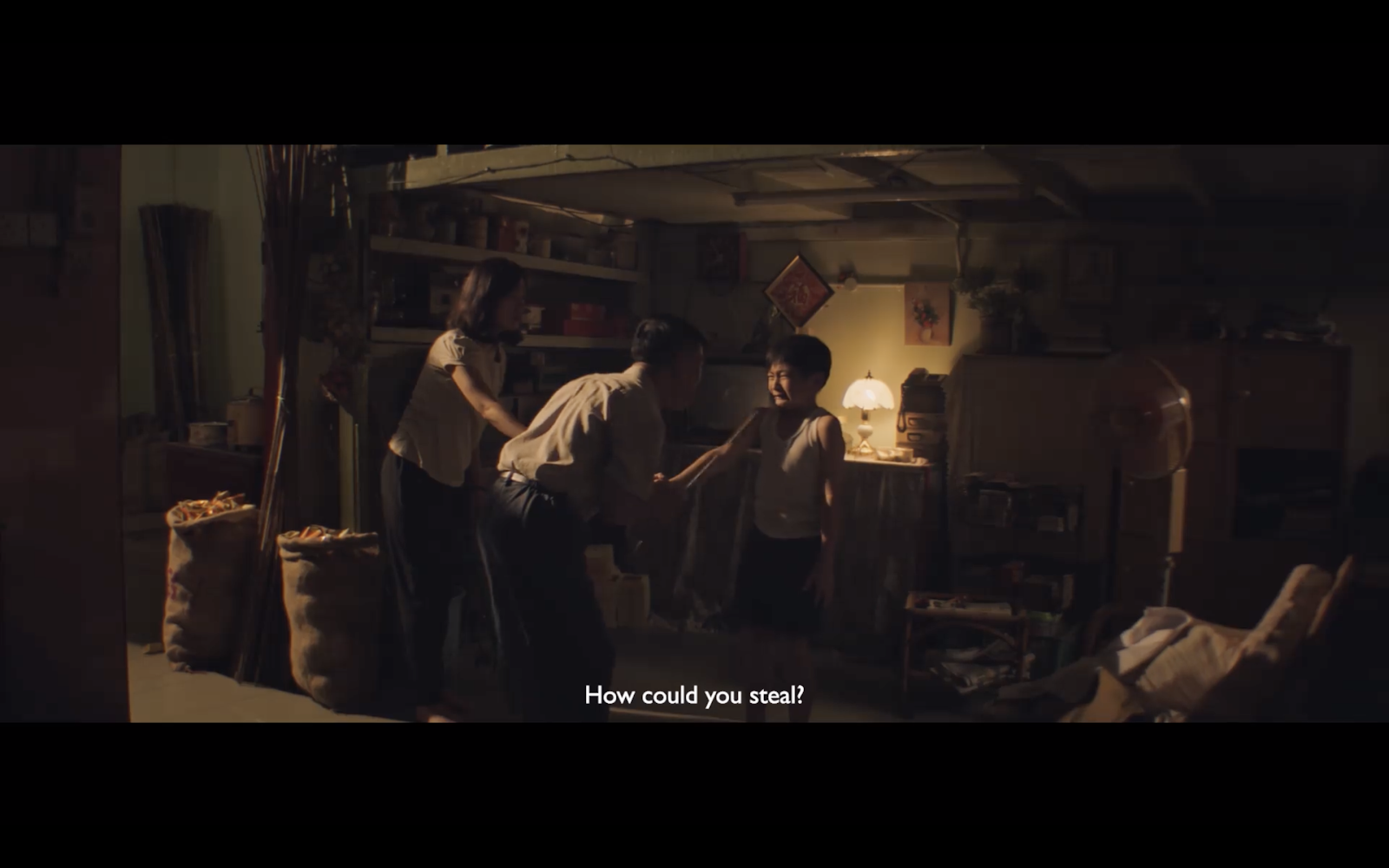 Ah Cai berates him harshly, asking if all he cares about is money. It seems so, for young, naive, Boon.

Broken and beaten, Boon retreats to the storeroom for a good cry. Ah Cai soon shows up with a ‘frog prince’ lantern as a peace offering, but it’s rejected. 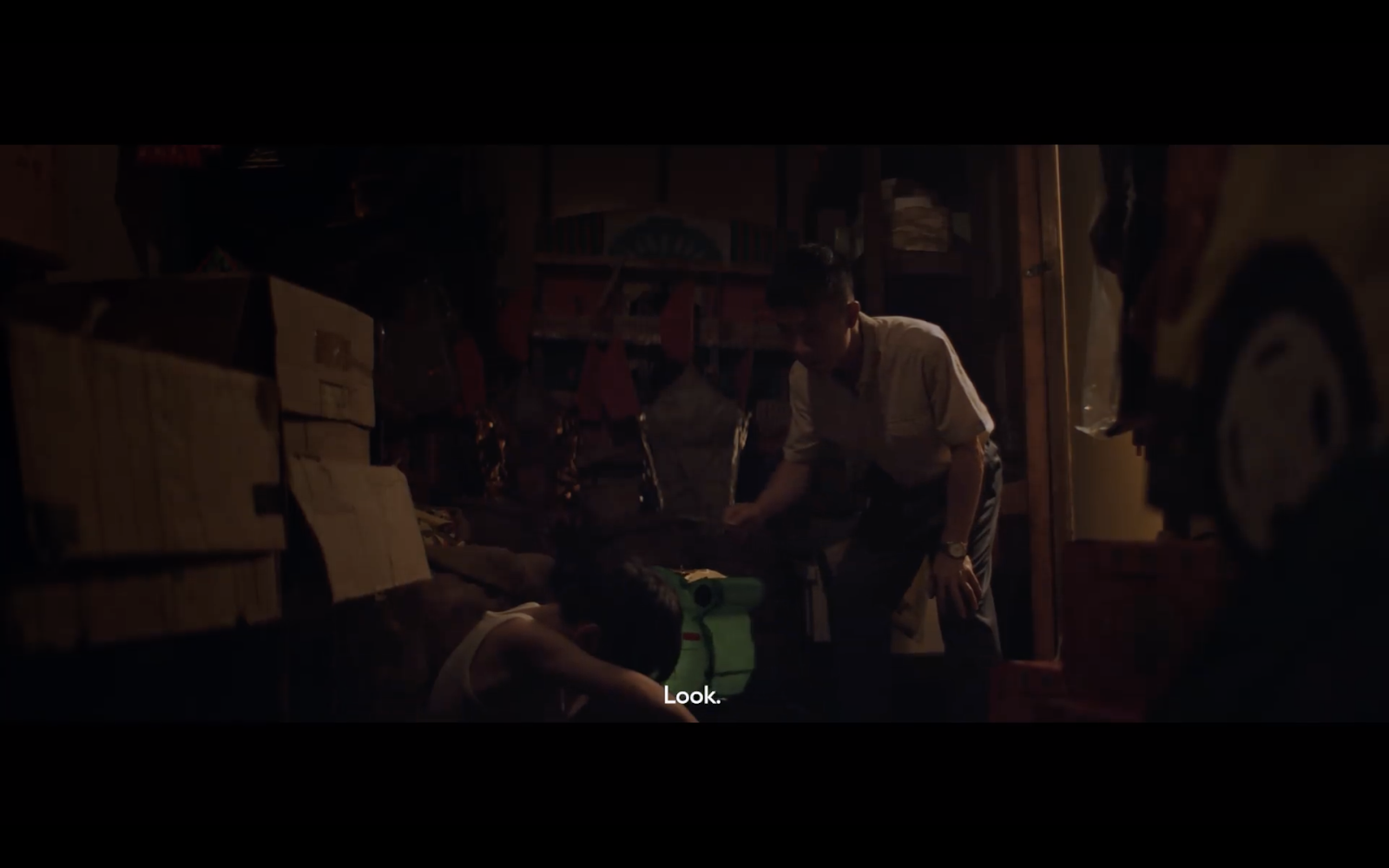 Boon pushes his father away, physically and emotionally, as he dashes out of the house and onto the streets. His mother runs after him, while Ah Cai stays behind.

Losing everything in a fire

Ah Cai paces around the house, feeling guilty and confused about what to do with his son.

At the same time, the candle in the lantern kindles a fire, setting the family’s painstakingly-crafted joss paper goods ablaze.

Boon and his mother return, but are greeted with the shophouse engulfed in flames and Ah Cai nowhere to be found. 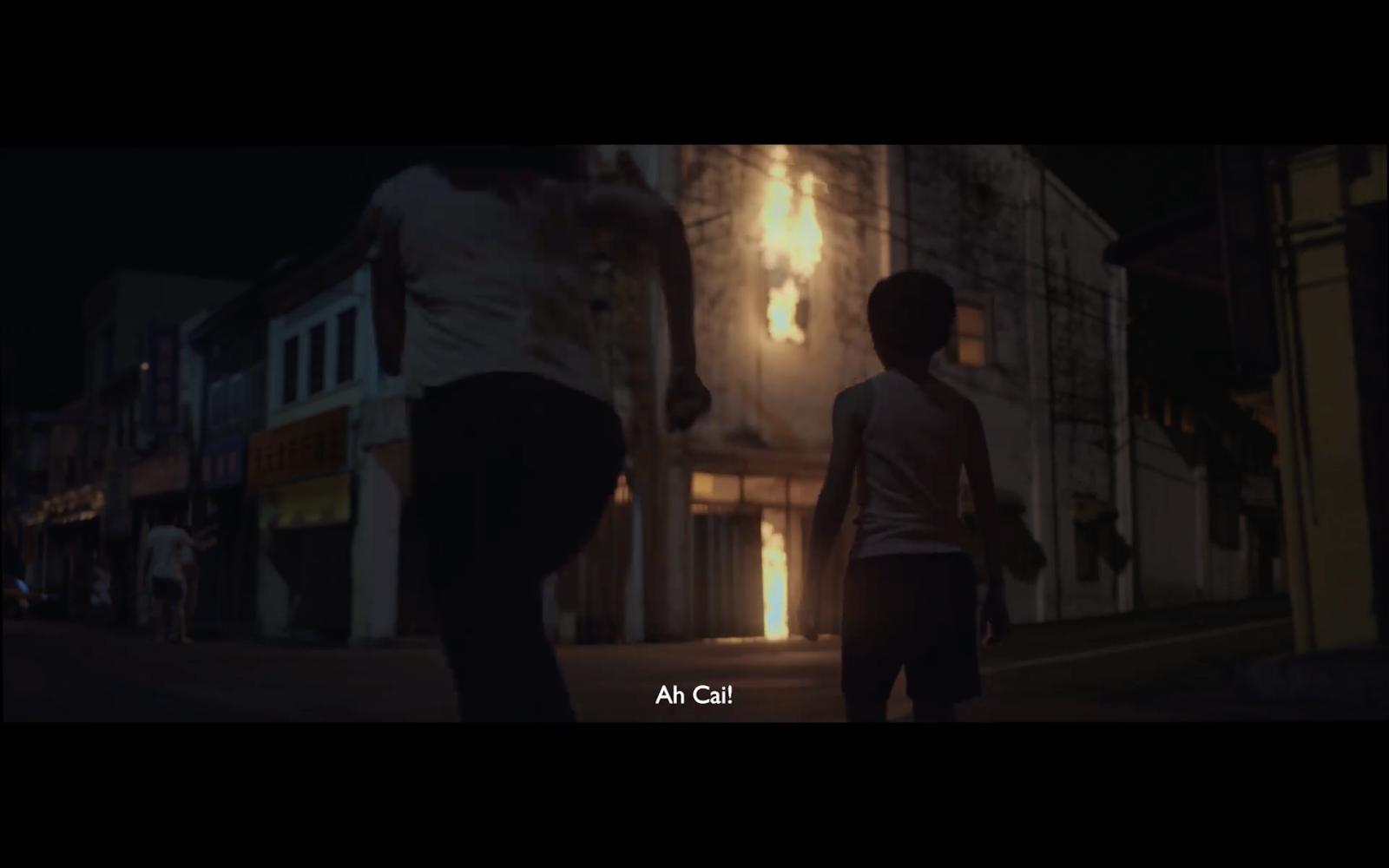 Boon falls to his knees, watching his whole world literally go up in flames.

If you’re wondering whether Ah Cai makes it out, you’ll have to watch the video here.

The film ends with adult Boon and his family visiting Ah Cai’s grave during Qing Ming. Boon tells his son about his father, the richest man in the neighbourhood – a ‘billionaire’, by his standards.

He finally understands that his riches came from his morals, not his material wealth. He had a difficult life, and worked hard to give his family the best he could, with whatever means he had.

It might not have been worth much, materially, but the sentiment of it all was priceless.

Now a father himself, Boon has to teach these values to his son.

Getting through Covid-19, just like getting over a family quarrel

‘The Frog Prince’ definitely captures the mixed emotions behind every family fight – pain, sorrow, anger, confusion, betrayal, but most of all, love.

I winced with Boon every time he was struck by the cane, feeling the sting of the bamboo and the stab in my heart just as much as he did. That scene reminded me very much of the beratings and punishments I received as a child.

I hated those lectures, and at times, even my elders who were admonishing me for my own good.

Now that I’m older, I’m genuinely grateful for those scoldings, no matter how harsh they were or how hurt I felt after getting them. My family meant well, and really only chided me severely when I deserved it – they definitely played a part in making me the person I am today.

Qing Ming is a festival of remembrance, and we’re reminded by this film to remember how our families have shaped us with the life lessons and experiences we’ve gone through, as well as the values they’ve imparted to us.

Now more than ever, we need to depend on these values to keep us grounded as we sit Covid-19 out.

Social distancing is undeniably taking a toll on society, both economically and socially. We can’t catch movies anymore, weekend yoga classes are completely cancelled, and even places of worship are closed.

Festivals like Qing Ming may be different this year, too. We won’t be able to visit our ancestors’ graves at Bukit Brown, or even wipe down their niches at Mandai Crematorium, but that doesn’t make it any less meaningful.

Life – and all its other parts – will still carry on, even with social distancing and working from home.

Covid-19 is just like a family quarrel – it stings at first, but we’re learning to work past it, and we’ll eventually emerge stronger.

Like Boon’s ‘frog prince’, sacrifices will have to be made, but they’ll be worth it, and possibly make things even better, once they’ve sorted themselves out.

You’ll have to watch the short film here to get that reference, but trust us, this is more worth watching than a Korean drama on Netflix you probably can’t even understand.

Just remember to have tissues on hand. I needed a box of them, and I’m sure you will too.

This post is brought to you in collaboration with PUB.