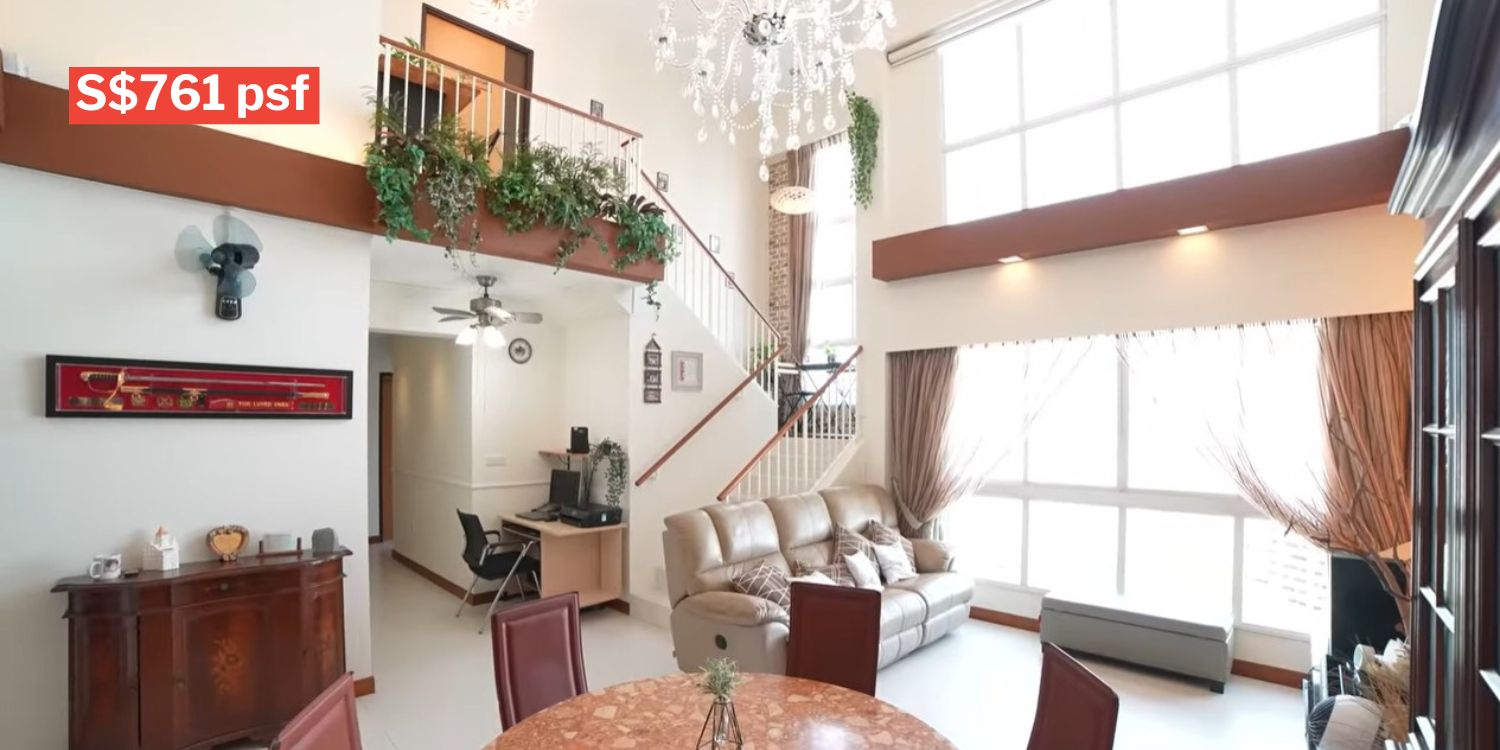 The 5m-high ceiling is enough to hang a chandelier.

Despite HDB’s best efforts to cool down the property market, million-dollar HDB flats still seem to sell like hot cakes.

Just three months after a Punggol HDB flat became the estate’s first million-dollar flat, another one swiftly broke that record.

The latest sale, which went for S$1.22 million, is again one of Punggol’s rare loft units. 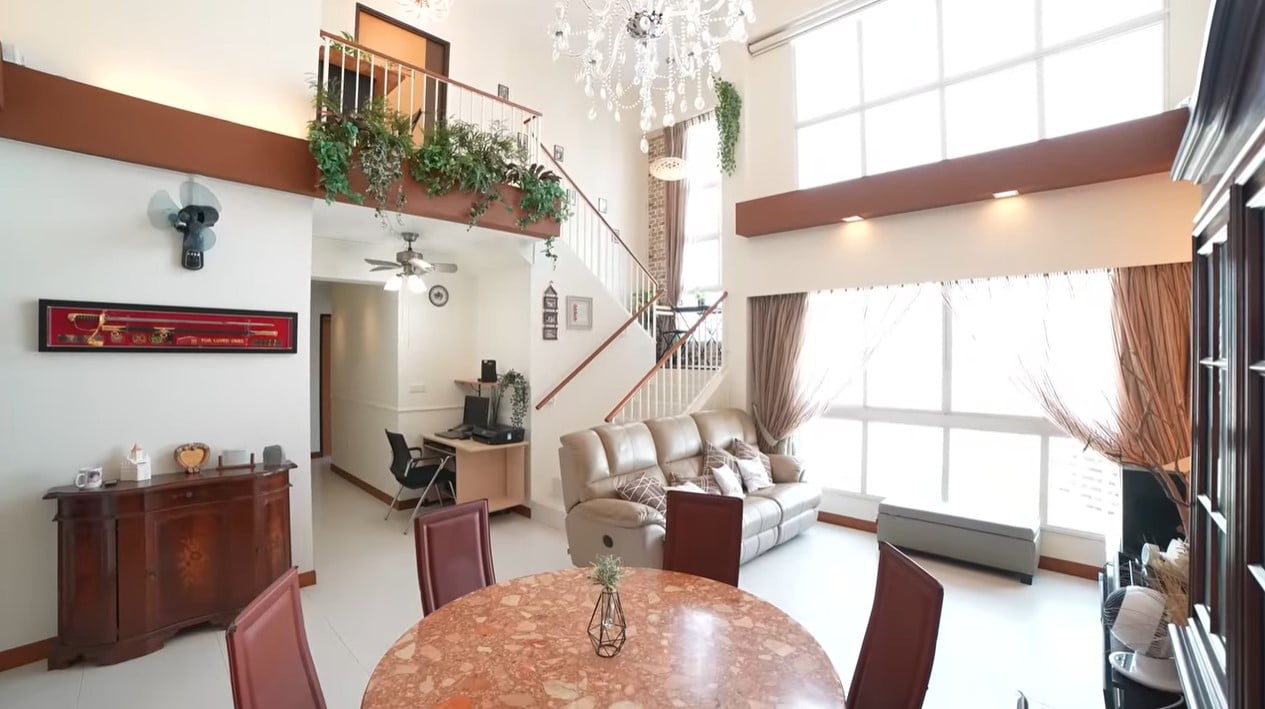 No wonder the flat had 10 interested buyers after it, all offering more than S$1 million.

Loft unit that set the record is in Punggol Sapphire

According to EdgeProp, the latest million-dollar flat is located in Block 268B of Punggol Sapphire, a cluster of HDB blocks along Punggol Field.

The development is just 10 years old, and a short walk from Soo Teck LRT station and a six-minute trek to Punggol MRT and bus interchange, as well as Waterway Point mall.

According to Mr Amos Lim, the property agent representing the seller, who promoted the flat on YouTube, there are four coffee shops and two 24-hour supermarkets nearby.

There’s also a childcare centre and primary and secondary schools in the area.

As for the five-room flat itself, it’s on the top floor, so one doesn’t have to worry about noisy neighbours upstairs.

It’s also spacious, with four bedrooms and two bathrooms in a loft layout with two floors — a total of 1,603 square feet (sq ft). 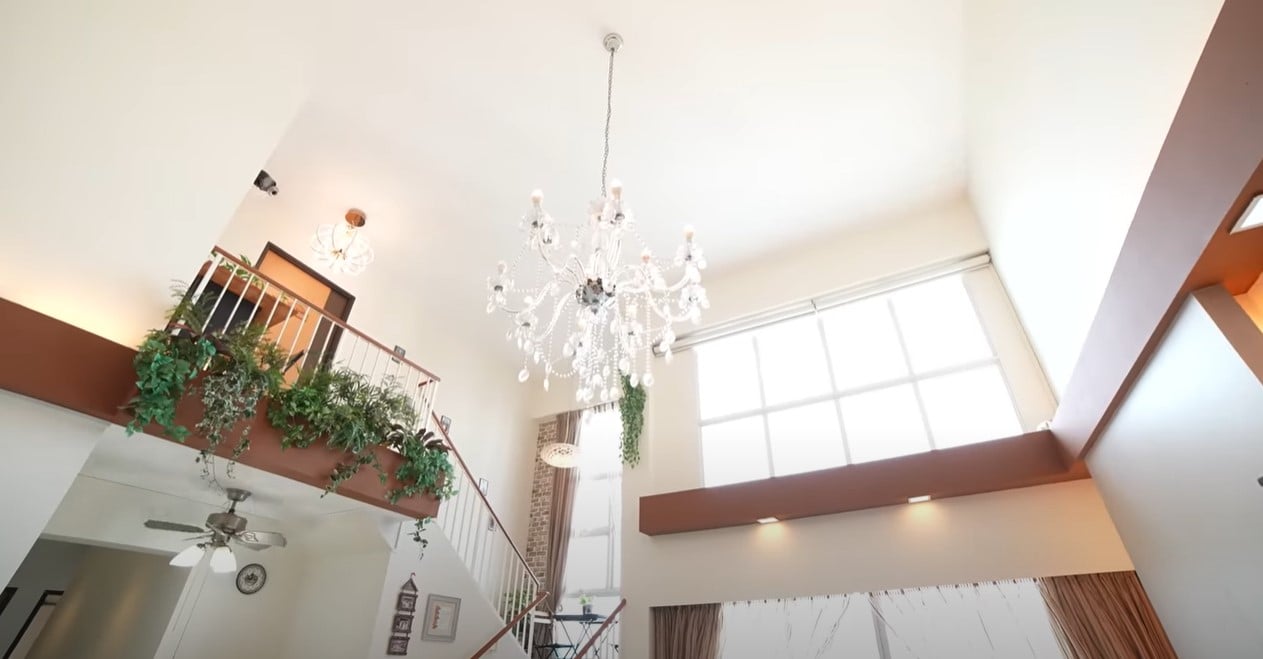 Mr Lim said the Option to Purchase (OTP) was signed in late December 2022, and the sale is expected to be completed next month, pending HDB approval.

It will set a record price for HDB loft units in Punggol when it goes through.

5m-high ceiling enough for a chandelier

The biggest attraction for buyers was undoubtedly the loft configuration, featuring a high ceiling of about 5m.

It’s enough to hang an opulent chandelier in the living room if one so desires. 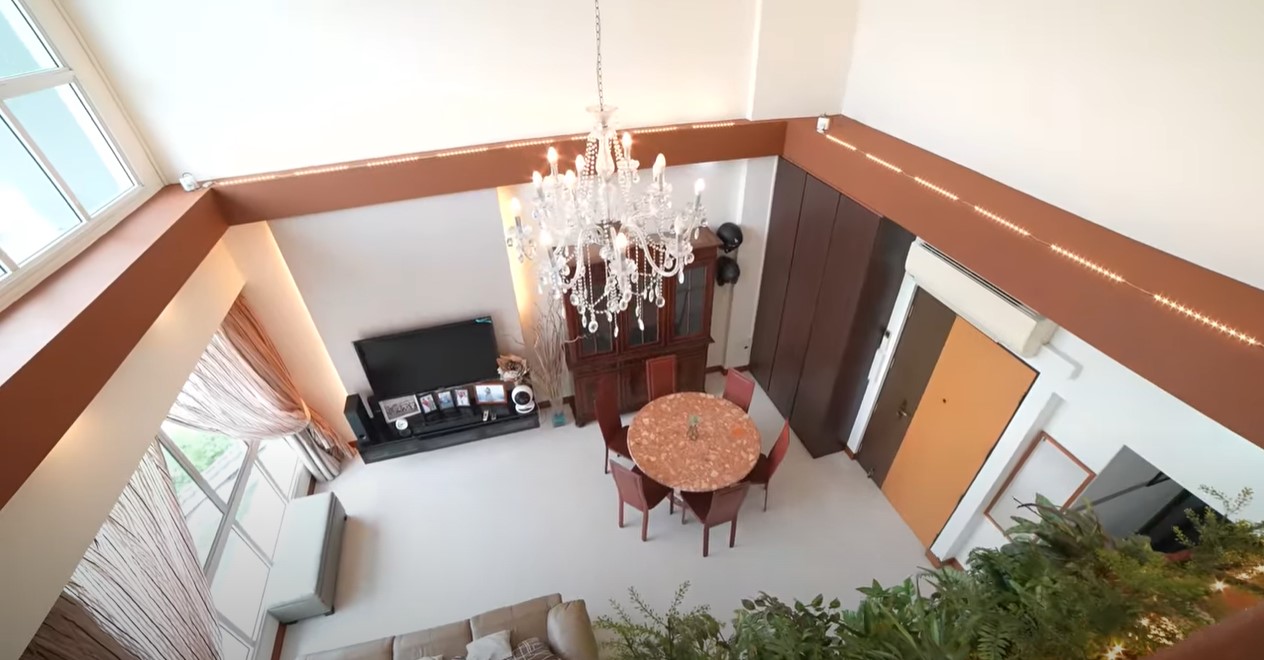 The staircase leading upstairs is also brightly lit with windows and doesn’t obstruct the living space, leading to a spacious area that’s good for entertaining guests.

There are only 23 of such airy loft units in Punggol, adding to the intense interest.

Flat has unblocked view of the CBD

Thanks to its perch on the top floor and the large feature windows, the unit has an unblocked view of Singapore’s Central Business District (CBD).

On a clear day, Punggol doesn’t seem so away from town after all, as the distinctive pyramid roof of the Millennia Tower near Suntec can be seen right from the flat. 10 buyers made offers for the unit

With such attractive features, the flat unsurprisingly garnered more than 100 enquiries when it was put up for sale in August 2022.

This is despite the initial asking price being a prohibitive S$1.25 million. 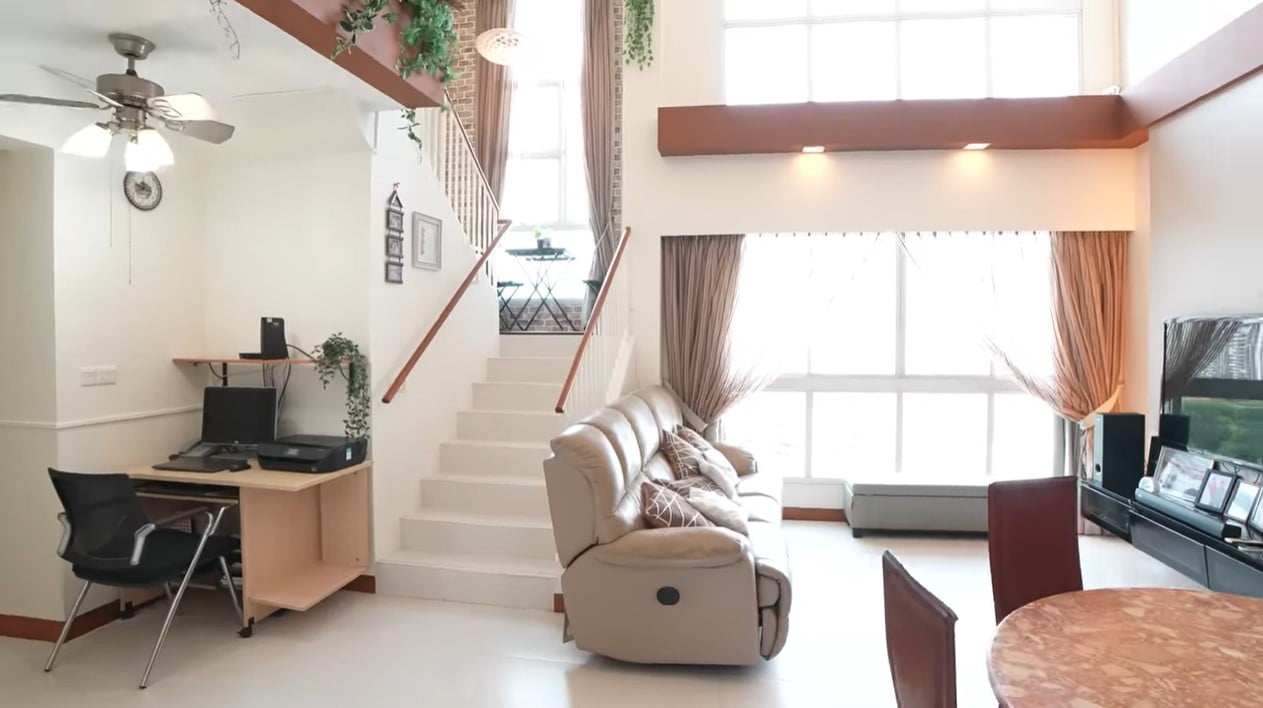 Eventually, some 10 buyers made offers for the unit, Mr Lim told AsiaOne.

In the end, the owner settled on a buyer he felt comfortable with.

Months earlier, in September 2022, another loft unit in Punggol Sapphire was sold for the princely sum of S$1.198 million — or about S$747 psf.

It was sold just two days after it was opened for viewing.

The 1,603 sq ft unit was the estate’s first million-dollar flat at the time. 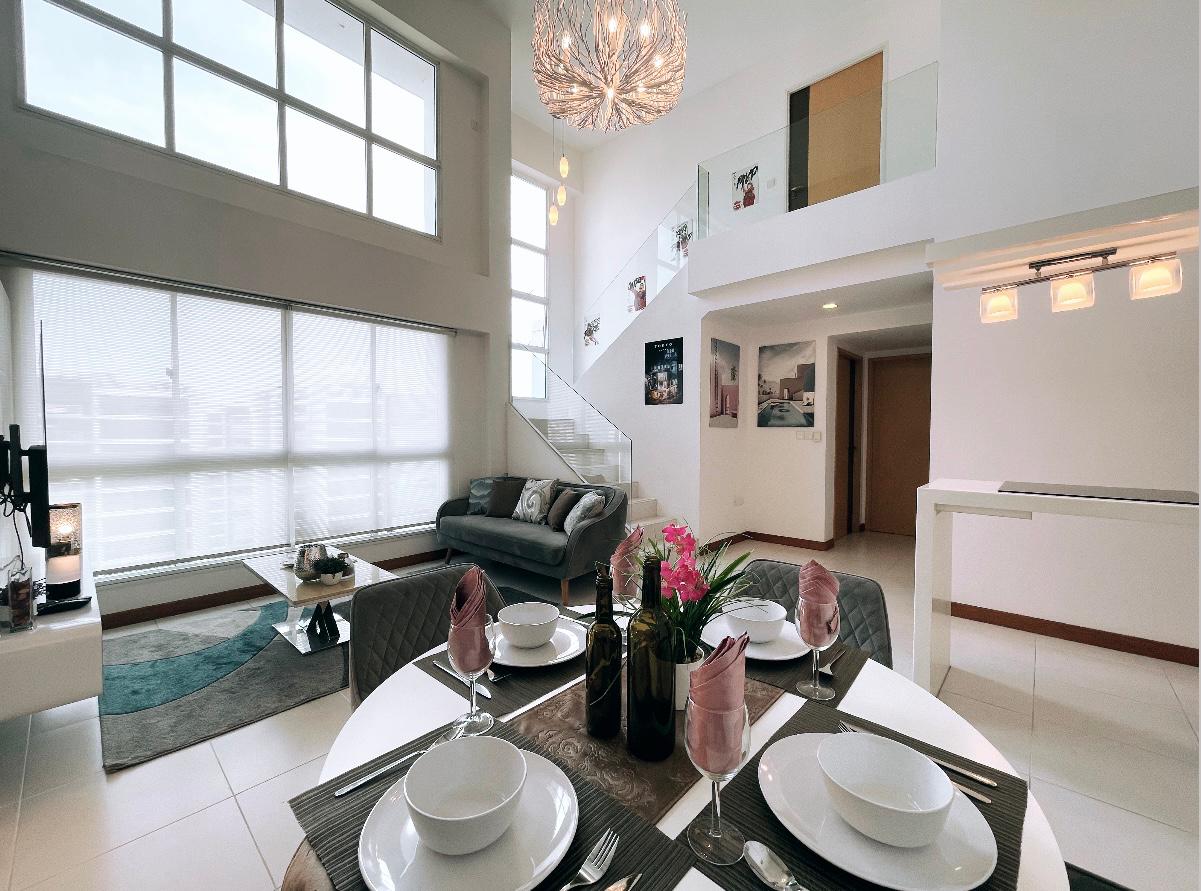 Ironically, its original asking price was S$1.22 million — the same price that has now been achieved by another flat in Punggol Sapphire.

Million-dollar flats in Punggol are notable as the estate is relatively young. More mature estates with more central locations have seen an abundance of such costly dwellings.

For example, in June 2021, a 49-year-old HDB terrace house in Whampoa sold for S$1.268 million, becoming the most expensive HDB resale unit in history.

Where will the next million-dollar flat be located? Your guess is as good as ours.