After an explosive interview given by Night Owl Cinematics (NOC) co-founder Sylvia, many questions and allegations abound.

Predictably, those invested in the drama since it began were patiently awaiting the next episode of the saga, which by now can already rival that of a 500-episode Taiwanese soap opera.

But not everyone is happy to be part of the saga.

On Wednesday (27 Oct), NOC’s co-founder Ryan Tan addressed several allegations that Sylvia made, as well as expressed his “distraught” at Sylvia airing his personal issues in public.

He also said that several important issues are to be resolved, but with the authorities and his lawyers.

He said that he is not involved with either Instagram page sgcickenrice, which leaked several clips of Sylvia badmouthing employees, as well as the creators of endthesilencee.blogspot.com. However, he’s “heartbroken” that this courtesy hasn’t been extended to him.

Ryan also said he is “distraught” at Sylvia giving the impression that he threatened suicide as a form of manipulation, arguing this isn’t true and that she left out “crucial details”.

But importantly, the story “was not hers to tell”, and he said he’ll continue to not discuss any personal issues.

From the start of NOC, Ryan had been sole director because Sylvia was not Singaporean.

Despite this, both of them had different areas of responsibility, with Sylvia being a de facto director.

However, after Ryan tried to raise employees’ issues with her, she apparently asked NOC’s finance manager to tell him that he was no longer COO.

This led to a conflict that eventually ended up in Ryan saying he wished to leave. Eventually, they seemingly came to an agreement on 8 May 2021. 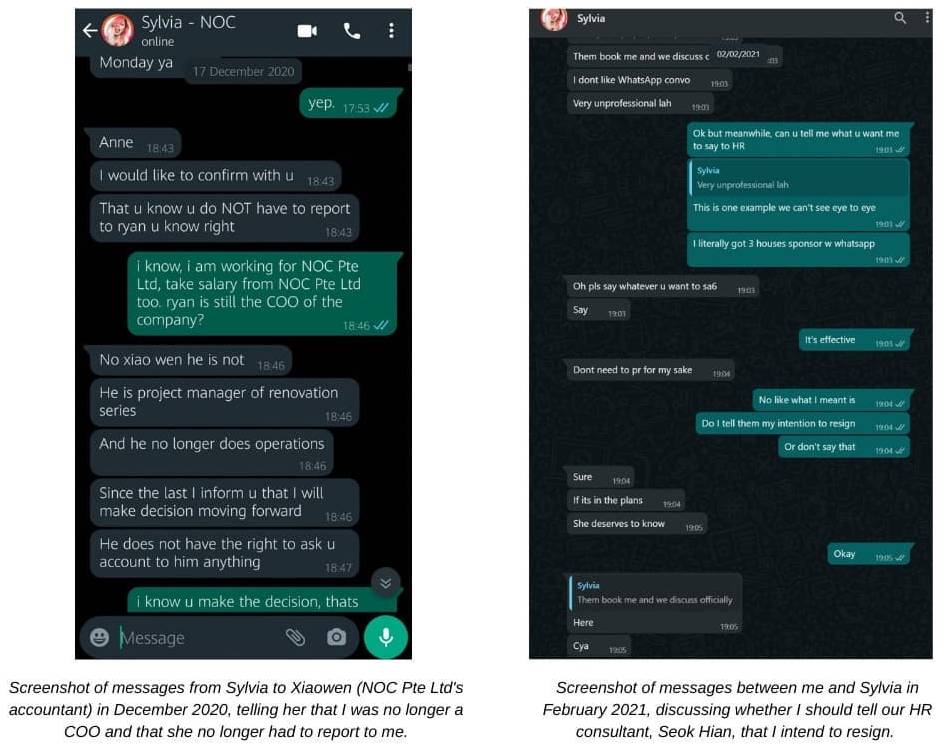 Reno King was apparently set up with Sylvia’s knowledge

According to Ryan, Sylvia was aware of Ryan incorporating Reno King from at least 29 Apr 2021, contrary to what she said about him going behind her back.

She even apparently sent him messages telling him to incorporate the company “quickly” and to set a clear boundary between NOC and Reno King. However, it’s unclear when she told him the former as the screenshots do not show this. He also said that Reno King has its own payroll and set-up. Sylvia had alleged that Ryan was using NOC employees for Reno King.

However, this would cease from May onwards, and Ryan had agreed to pay NOC employees for their work in Reno King in April.

The company was incorporated on 21 Apr, allegedly after discussions with Sylvia.

Although there was an agreement where various things were discussed between Ryan and Sylvia on 8 May, including for Ryan to concentrate wholly on Reno King and to stop drawing a salary from NOC, things apparently changed. 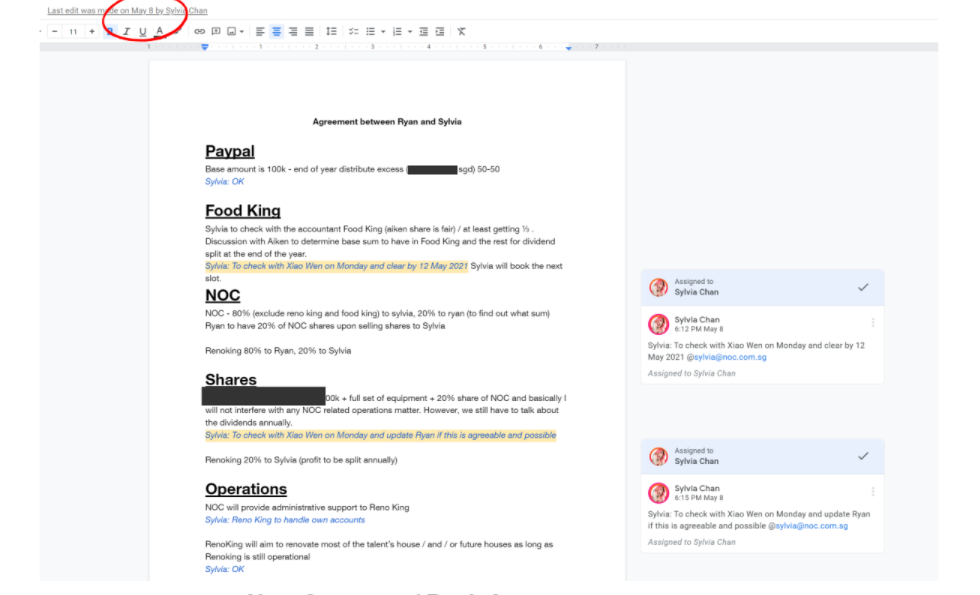 The agreement included other details that Sylvia added. 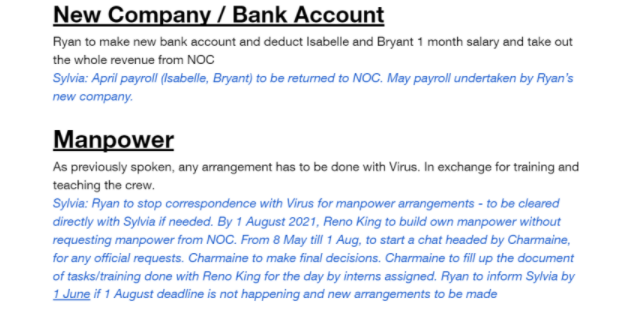 After this, Sylvia allegedly denied having any such agreement months later.

On the same day, Ryan and Sylvia apparently also agreed that she’d buy some of his NOC shares, making him a 20% shareholder. Though he didn’t state an amount, he said that it was not in the “millions” as claimed by Sylvia.

He also agreed to not be involved in day-to-day operations and to resign as sole director.

However, Sylvia apparently refused to become a director so that Ryan could step down, as leaving the seat vacant is illegal.

As a result, he had to resume his seat as director against his own wishes. Sylvia is apparently moving a motion to be appointed a director on the record after Ryan commenced investigations into workplace allegations and issues.

Ryan also wanted to state that he did not hack into Sylvia’s email accounts or know any of her passwords or pin code to her house office.

He clarified that he used keys to access the house while he was renovating it, but has since returned them.

Ryan stated he only recorded 1 meeting, that being the 8 May one between himself and Sylvia, due to the number of parts in the agreement to work out.

He claims it wasn’t him who recorded the meeting uploaded to endthesilencee.blogspot.com and doesn’t possess the file either.

All he wants is a clean break

Though he merely wishes to make videos and get fairly compensated, he claimed he is now cast into the spotlight once more and doesn’t want to be anyone’s hero or villain.

While there’s more to be said, Ryan noted that he’ll leave these matters to the authorities to handle, as well as his lawyers.

His only hope is that one day Sylvia will one day reveal the amount she offered for his NOC shares, 2 NOC-related entities, and her proposal for Reno King.

As some people may have expected, a back-and-forth has ensued between Ryan and Sylvia.

Given they were married for 10 years and founded a company together, there’s definitely much to unpack.

However, personal issues should not be aired in public without consent of the subject. That is only fair to the involved people.

Regarding allegations that involve possible illegal actions, such as Sylvia being hacked, this is something for the authorities to investigate.

We hope that the discourse will remain about the workplace and that an amicable solution can be reached. 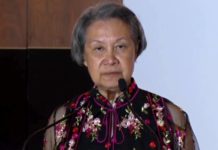