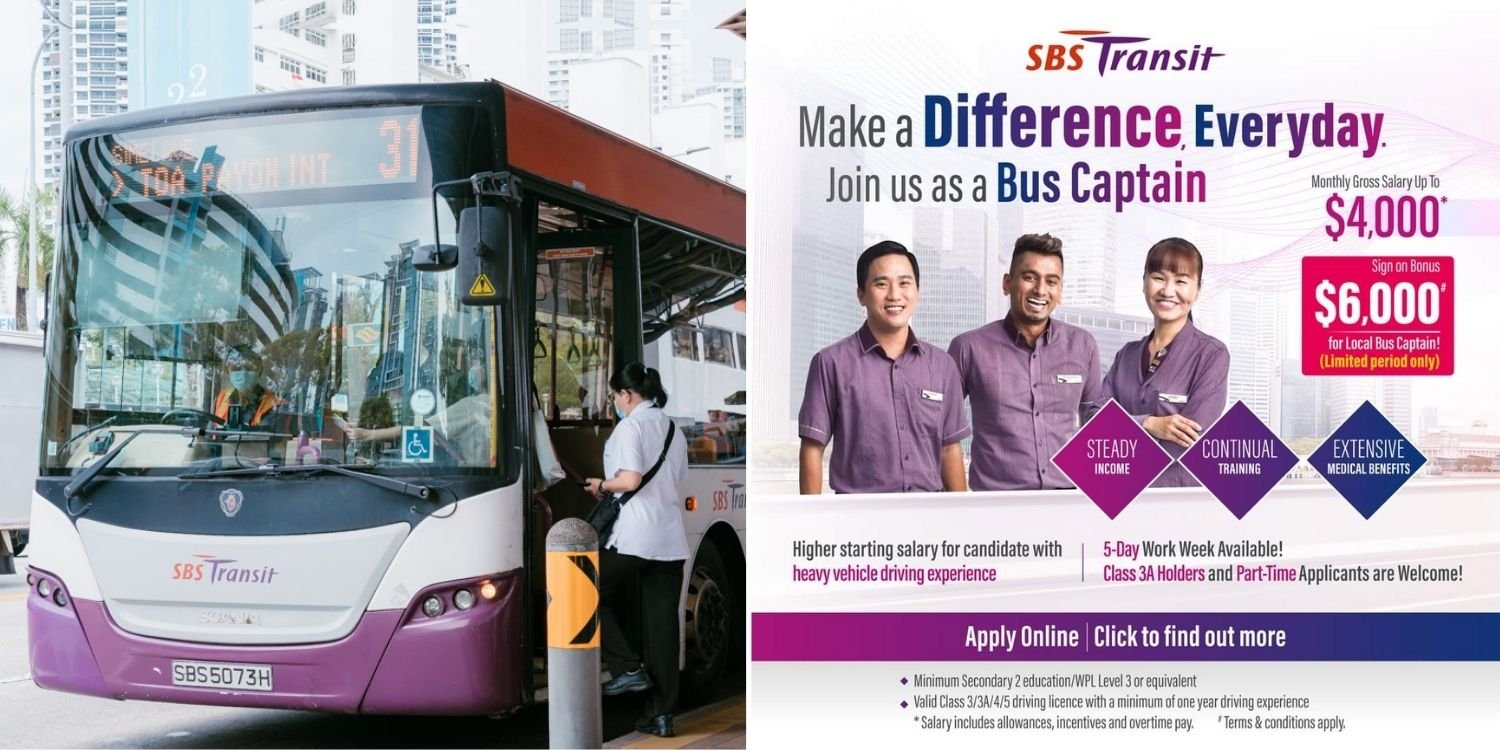 Locals can stand to get a $6K sign-on bonus.

As the uncertainty of the pandemic continues to take a toll on our economy, many may be seeking greener pastures and new jobs. While being a bus captain for SBS transit may not typically be on top of anyone’s list, the money they’re offering might just change your mind.

An SBS Transit ad calling for bus captains has gained substantial traction on Reddit and we can see why. 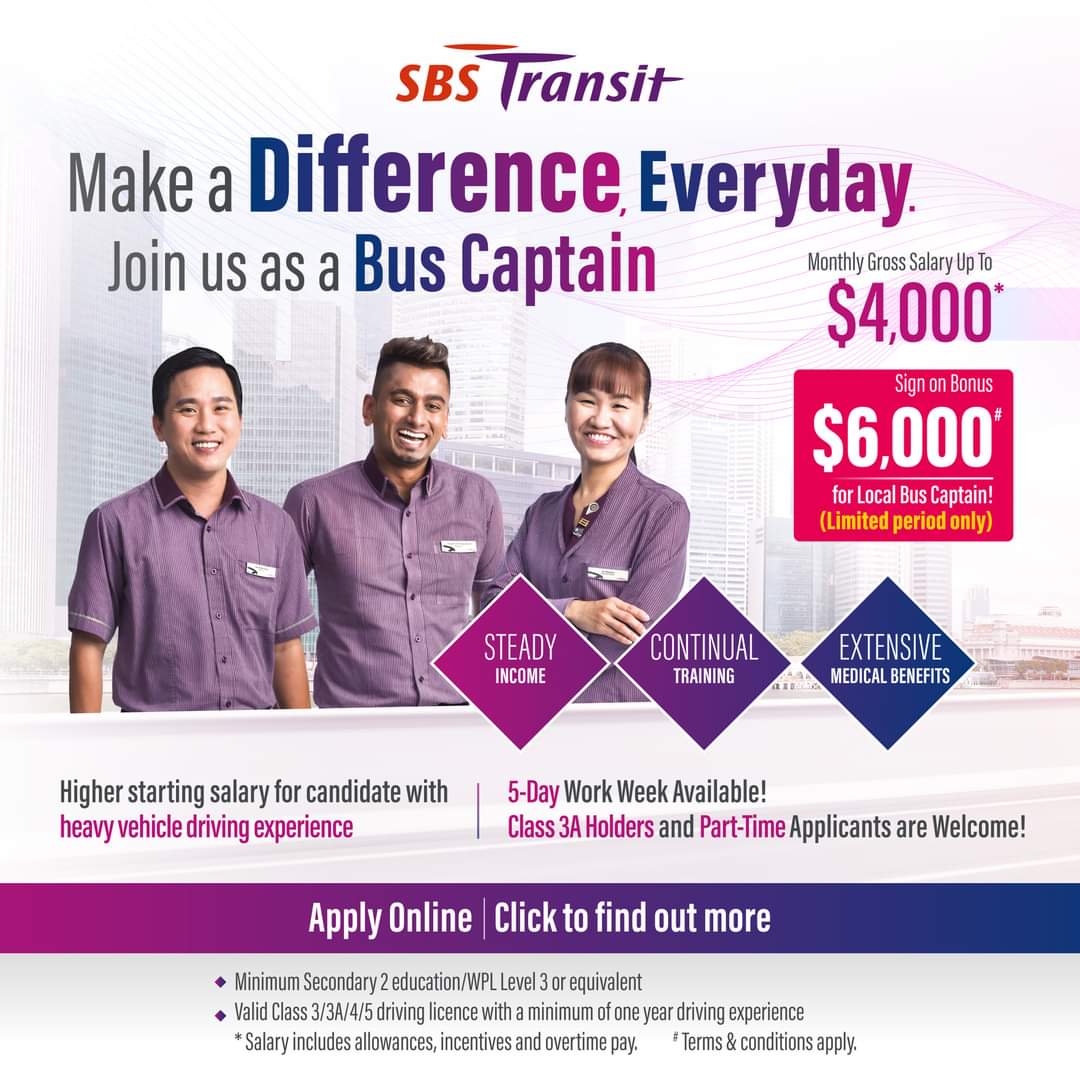 The bus company is apparently offering a $4,000 monthly salary and a $6,000 sign-on bonus for local applicants.

Before you jump on the opportunity, however, do note the asterisk indicating that you’ll need to meet certain requirements to get these numbers.

First posted on Reddit by user /u/disillusioned_3725, the SBS ad promises an attractive monthly salary along with the following perks:

As with any job, there are certain requirements that applicants need to meet, including:

The ad also calls for part-timers and Class 3A holders to join as bus captains.

Claiming to be a bus captain too, the Redditor who posted the ad shared their positive views about this.

According to them, the remuneration packages have improved vastly over the years, especially since the Bus Contracting Model (BCM) came into play. 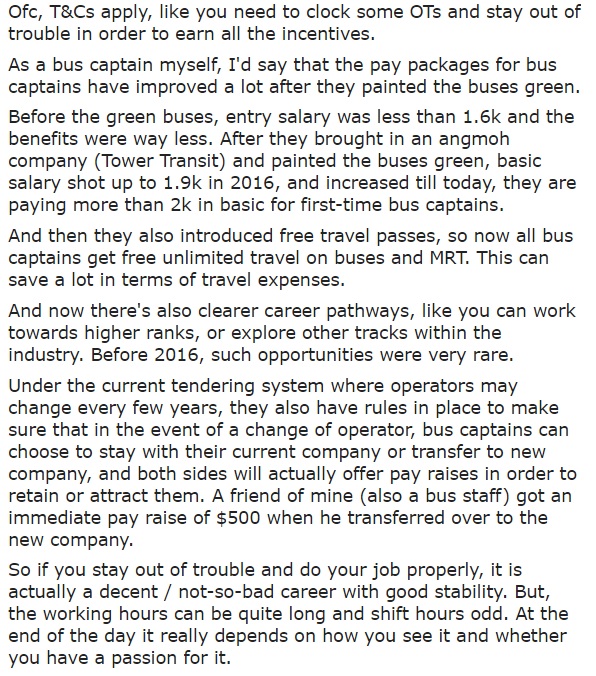 For context, the Redditor said that the entry salary was less than $1.6k before the tender system. Over the years, with heightened competition, the minimum salary has risen to over $2,000 for first-time bus captains.

One Redditor applauded the news and lauded the bus captains as extremely important members of our society, especially in the pandemic we are in.

Being on the frontlines is also another factor a Redditor touched upon as they would have to come into close contact with passengers very often.

While the ad has evidently garnered many positive responses, a check on the SBS Transit website itself shows that the monthly gross salary for bus captains remains at up to $3,500, with a $3,000 sign-on bonus for locals.

Whether the rates have changed per the Reddit ad is unclear. MS News has reached out to SBS Transit for comments and will update the article accordingly once they reply.

No job is without its caveats

Bus captains work long hours and although the ad paints a pretty picture, no job is without its caveats.

At the end of the day, as the Redditor mentioned, it’s a stable career that has enough room for progression if you comply and stay out of any possible trouble.

That being said, the pandemic has shone that careers like these are indispensable and if you’re looking to settle down, this could be a great option to consider.

Featured image by MS News and adapted from Reddit.