English is undoubtedly the most important language in the world. With it being spoken almost everywhere, it comes as no surprise when people’s proficiency in English are improving year after year.

That is presumably the reason why Singapore is overtaken by more countries with non-native speakers. Singapore overtaken by the Netherlands & Norway

The test, which looked at the scores of 2.3 million people across 100 countries, sees Singapore ranked behind countries such as the Netherlands – ranked 1st – and Norway that came in 3rd. Meanwhile, 90% of people who took the test are below the age of 40. The median age was 23 years old.

The top 14 countries in the list that includes Singapore, Germany and South Africa, are shown to have “very high proficiency” in the English language.

This makes us the top Asian country in terms of English Proficiency.

Our neighbours – the Philippines and Malaysia – placed 20th and 26th respectively, which is still considered impressive as they fall under the “high proficiency” category.

Although the Lion City sees itself sitting comfortably as Asia’s top ranker, we have experienced the 2nd largest drop in English standards, coming behind Sri Lanka.

On the other hand, countries such as Taiwan, China and Myanmar have significantly improved from last year’s ranking. 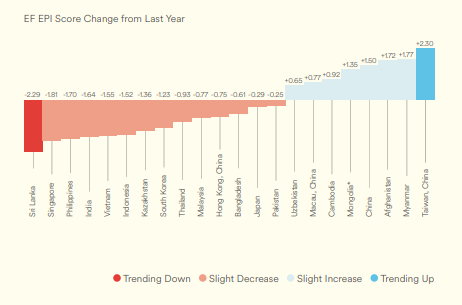 Let’s all work harder to improve our ranking

We can all help to contribute to our country’s English proficiency ranking by doing small things to improve our command of the universal language.

Learning a new word everyday or reading a chapter of a book may be small steps, but if everyone does it together, it can go a long way.