SingPost Finds Lost Parcel Worth $1,500; Will Remain In ICA’s Custody Till Taxes Are Paid The parcel will be delivered after GST payment is made.

SingPost Referred Parcel To The ICA

They have referred it to the ICA to calculate the amount of GST to be paid as its value was previously under-declared.

Mr Kent has been updated on the status of his item, and will be receiving his package once the relevant taxes have been accounted for.

The full statement by SingPost can be found below.

Update (29 May, 11.40pm): A SingPost spokesperson shared that Speedpost has been in contact with the customer, Mr Kent, regarding his package.

They clarified that the seller from Australia had declared the value of the parcel as S$287 (AUD300) instead of S$1,489 (AUD1,557), and no additional insurance was taken by the seller.

Under regulations from the Universal Postal Union (UPU), the maximum compensation they can provide in this case is S$150 or the declared item value, depending on which is lower. The compensation will also be issued to the originating postal organisation.

SingPost has advised Mr Kent on how to seek compensation through the seller and the service provider from Australia, and is currently investigating the missing parcel.

They also noted that customers should ensure that goods bought from overseas are accurately declared and that their high-value goods are properly insured by the overseas sellers.

The full statement by SingPost can be found below.

Singaporean shoppers often find themselves waiting eagerly for the arrival of their parcels.

But for one netizen named Mr Kent, the arrival of one of his parcels never happened.

According to him, SingPost had allegedly misplaced his parcel but only offered to compensate him with just 10% of the package’s value.

Here is his post in full. We also break it down for you after the jump. 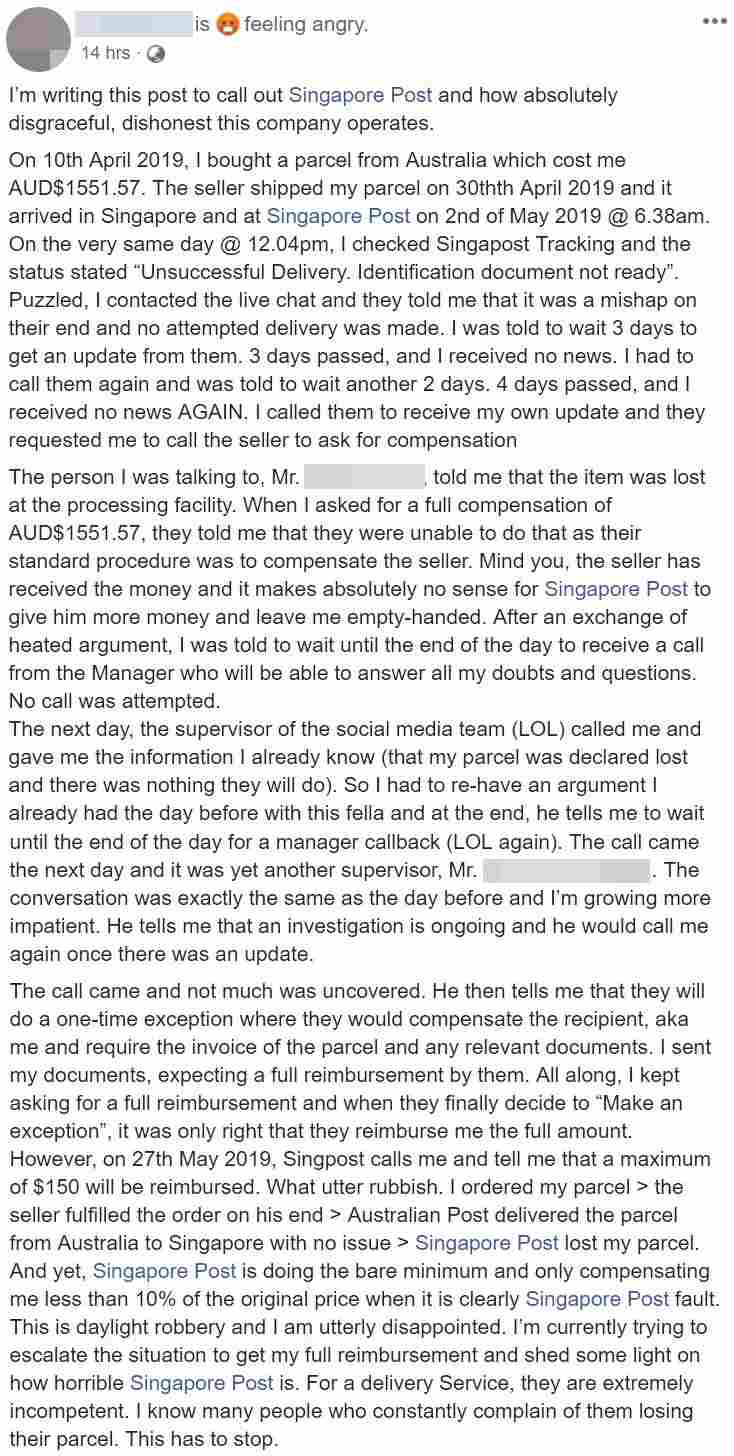 Using the tracking function under SingPost’s Speedpost Priority service, he found that the merchant had shipped his purchases out on 30 April.

The parcel subsequently arrived at SingPost facilities on 2 May.

However, later that day, he found that the delivery status was changed to “Unsuccessful delivery. Identification document not ready.” 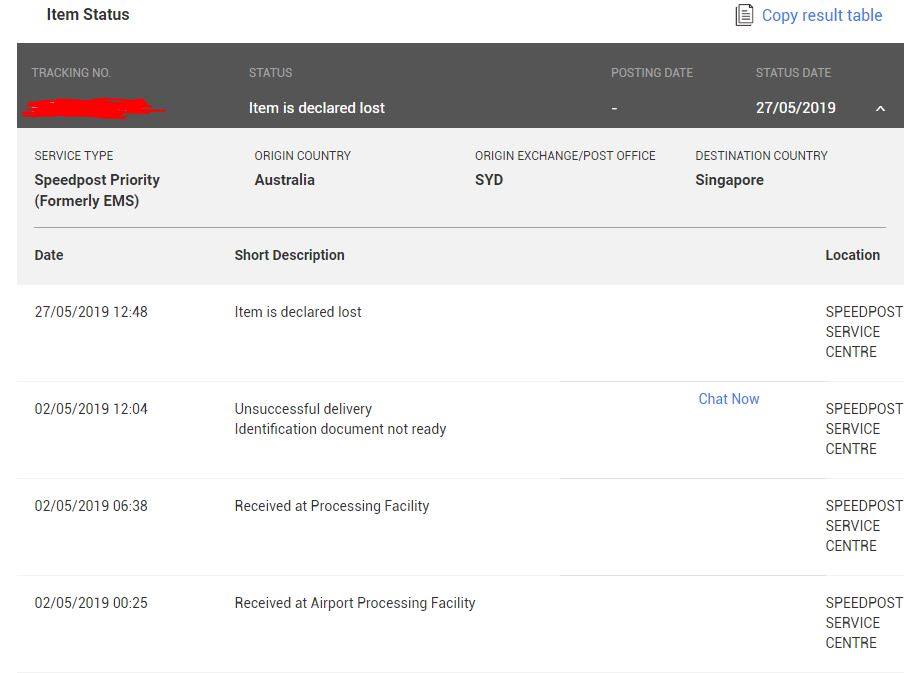 Confused, Mr Kent contacted SingPost using their live chat service and was allegedly informed that it was their mistake as no delivery was made.

He was also told that SingPost would get back to him after 3 days.

That did not happen. So Mr Kent reached out to SingPost again but was told to wait for an additional 2 days.

This time, 4 days passed but there was still no response.

Mr Kent then called them another time, and a service staff allegedly told him that the parcel had gone missing at the processing facility.

The staff also suggested that Mr Kent contact the seller himself to ask for a refund.

Mr Kent then requested for a full refund of the parcel’s value – S$1,478 – from SingPost.

However, the staff claims that they were not able to do so as their standard procedure required them to compensate the seller instead.

Mr Kent felt it was ridiculous as the seller had already gotten his payment.

A quarrel ensued, and he was told that a manager will call him later to address his queries.

He received a call only on the following day when the supervisor of SingPost’s social media team reached out to him allegedly saying “there was nothing they will do”.

Another argument occurred, and he was again told to wait for a manager to call back.

Compensation offered, but not in full

Mr Kent received a call the next day from another supervisor but came to the same conclusion as the previous conversation.

As he grew more impatient, the staff told him they were looking into the matter and would get back to him again as soon as possible.

The supervisor allegedly informed him that SingPost will make an exception and reimburse him, the recipient.

On 27 May, SingPost allegedly offered to compensate him a maximum amount of $150 — just 10% of the parcel’s price.

Mr Kent was disappointed with the outcome and now hopes to seek full reimbursement from SingPost.

Following MS News’ queries, a SingPost spokesperson has issued an official statement regarding the incident.

Here is the statement in full:

Speedpost has been in touch with customer Fatah Kent on the non-delivery of his package earlier this month.

Mr Kent’s package was sent from Australia with a seller-declared value of AUD300 and not AUD1,557. Furthermore, no additional insurance was taken by the sender. Under the Universal Postal Union (UPU) regulations, the maximum compensation for items sent or received by Speedpost or Express Mail Service is S$150 or the declared value of the item, whichever is lower, to the originating postal organisation.

We have also provided Mr Kent with advice on how to seek compensation through his seller and the service provider in Australia, as we continue our investigation into the missing item.

It is important for customers to note that the value of goods bought from overseas must be accurately declared. Sending parties misrepresenting or making a false declaration of the value of goods is an offence in many jurisdictions and may lead to penalties being applied by government authorities. We would also recommend that customers purchasing high-value items from overseas ask that their senders properly insure the goods for the true replacement value.

Parcel has been found & will be delivered

SingPost will be delivering the parcel to Mr Kent once the relevant taxes have been paid for.

Speedpost has managed to locate Mr Kent’s package. The item, approximately the size of a C5 envelope, was referred to the Immigration and Checkpoint Authority (ICA) for computation of GST payable, given that the value of the package was previously under-declared at AUD300.

Speedpost is in touch with Mr Kent and has since updated him on the status of his item. Speedpost will be delivering Mr Kent’s package later this evening upon payment of the applicable taxes.

Kudos for the swift investigation

We are glad that SingPost was successful in locating the parcel within just one day of investigation.

Let’s hope that the relevant taxes will be accounted for soon so Mr Kent can finally get his hands on the parcel that has long eluded him.