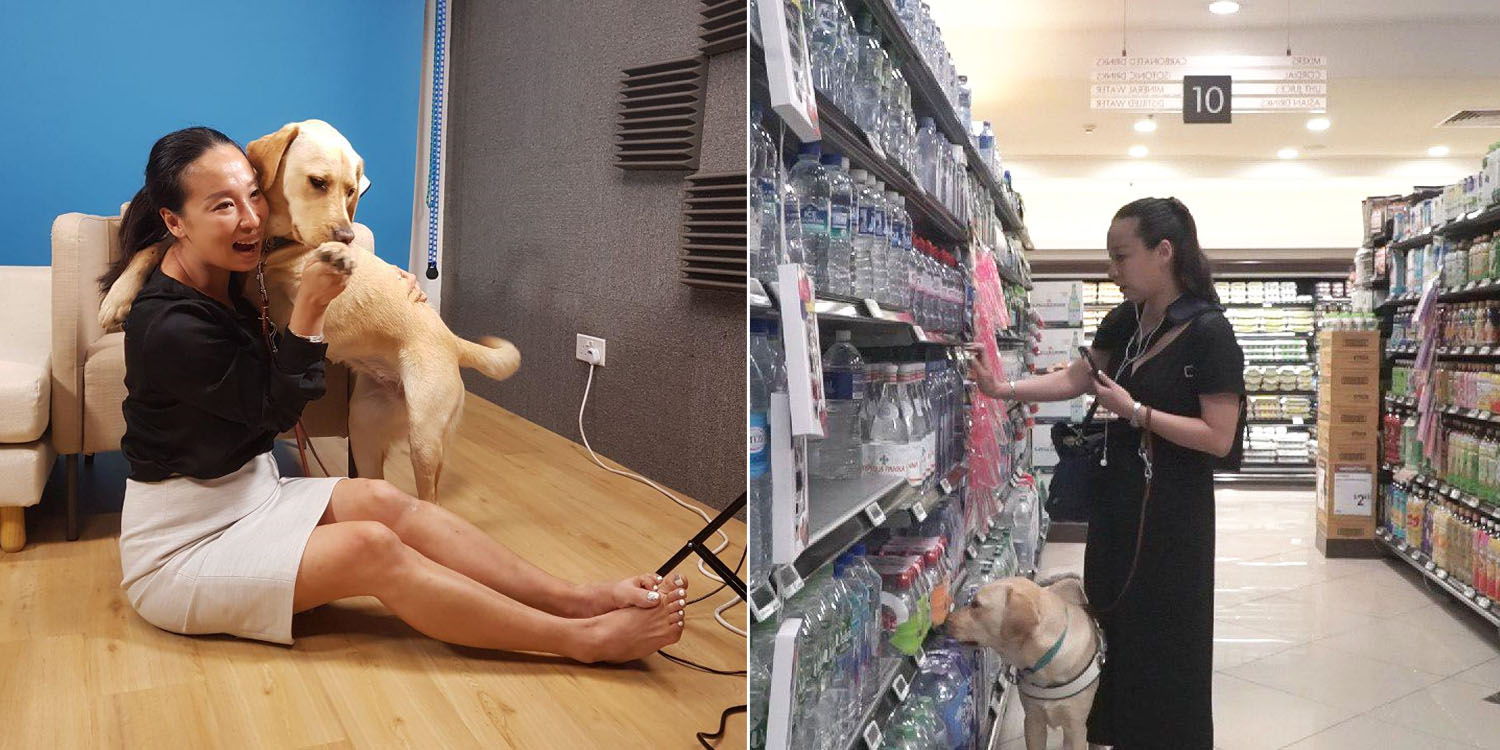 Her guide dog gives her independence.

The presence of a blind person in public is often indicated by the light tapping sounds of a white cane in contact with the ground.

It’s not often that we see a guide dog taking the place of the white cane here in Singapore.

For Ms Cassandra Chiu, who lost her sight at the age of 8 from Stargardt disease, her guide dog Elke is sometimes an unwelcome presence in public areas such as trains, buses, and eateries. 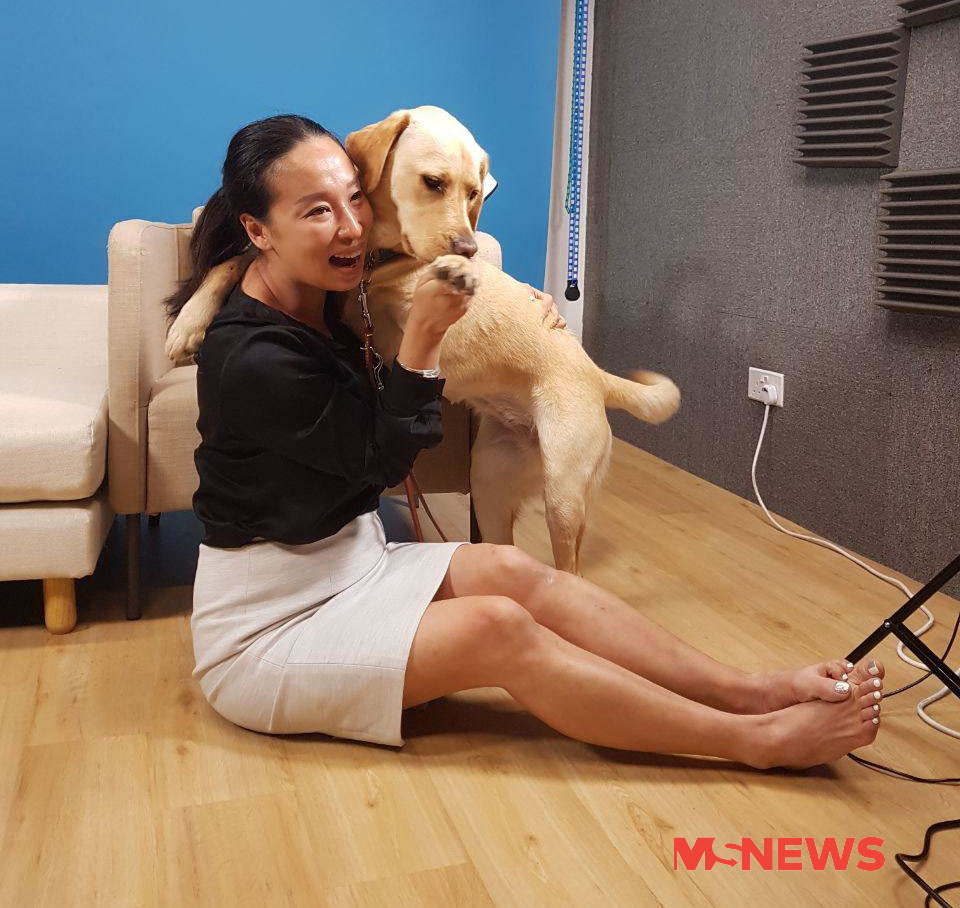 Cassandra & Elke waving to the camera

Unlike the nuisance some people assume them to be, 2-year-old Elke actually helps Cassandra move around a lot faster, granting her valuable independence.

We followed her for a day to learn more about her life. You can also watch the documentary here.

Starting the day with Cassandra & Elke

It was 5.30am on a weekday. My colleagues and I met up with Cassandra at the void deck of her flat before heading to a bus stop for her usual commute as she accompanies her 13-year-old daughter to school before going to work. 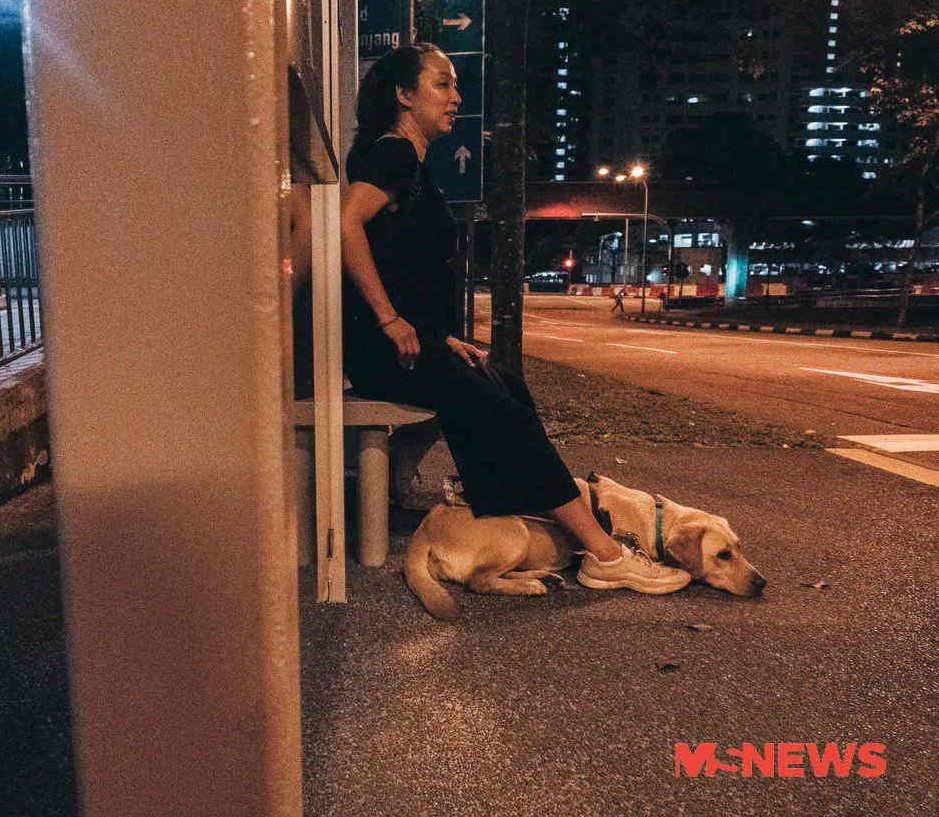 The stillness of the neighbourhood was disrupted by the sound of a bus approaching, as we saw it turning the corner.

“It might be a 920 first,” Cassandra remarked before we could see the bus number. We were waiting for bus 972, which came shortly after.

Aboard the bus, Elke invited occasional stares but the commuters generally didn’t mind her presence, presumably seeing how well-behaved she was. 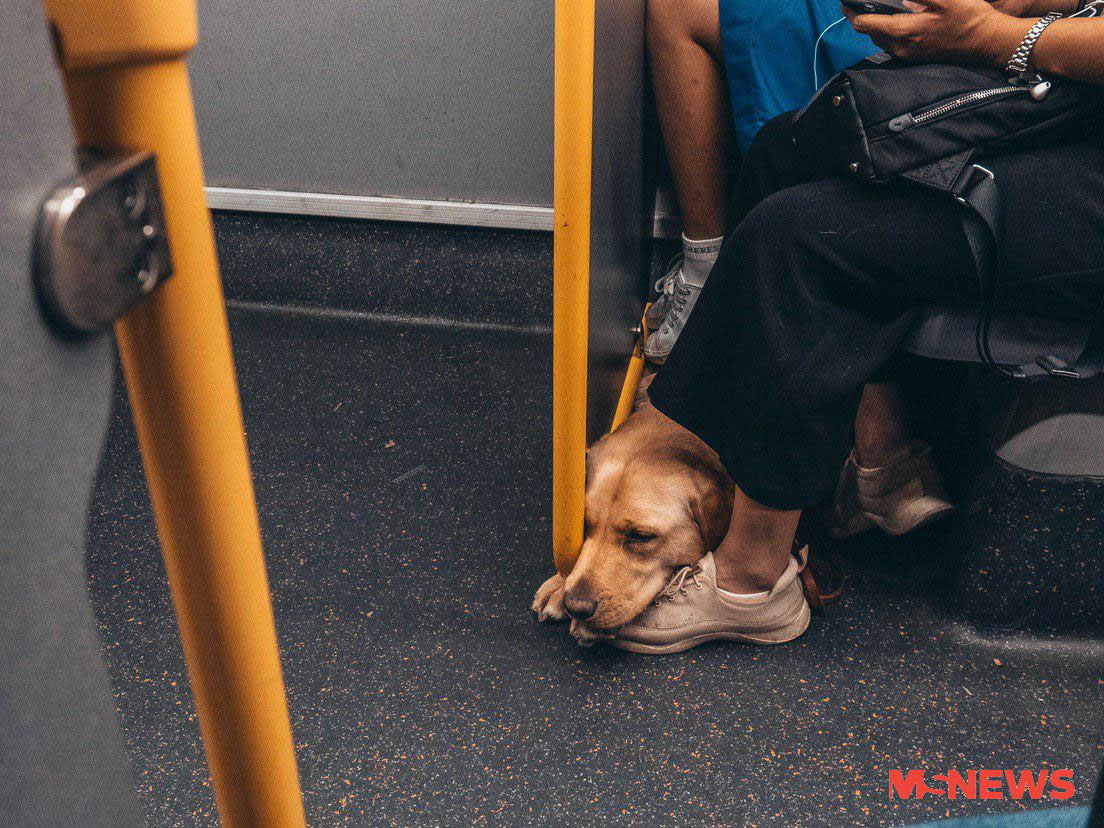 Halfway into the ride, my colleague chatted up an elderly lady who often takes that same bus. She commented that she frequently sees the three, and praised Elke for always being obedient and quiet.

As buses do not have a system announcing the next stop, unlike the MRT, Cassandra shared that she often has to depend on the bus driver or a phone app to know when to alight.

However, with a smile on her face, she recounts a particularly cute incident where a bus driver had taken the initiative to announce every single stop, in the same format as the trains’ announcement system, after she boarded the bus.

“I regretted not kind of recording it!”she laughed.

Taking her ‘yellow Ferrari’ to work

After alighting from the bus, Cassandra sent her daughter to school and began a 20-minute walk to her office at The Safe Harbour Counselling Centre.

There were many roads to cross, but every turn was familiar to Cassandra and Elke. She fondly shared with us how she had nicknamed Elke her ‘yellow Ferrari’. In fact, we literally had to run after her sometimes, given the speed at which she was walking! 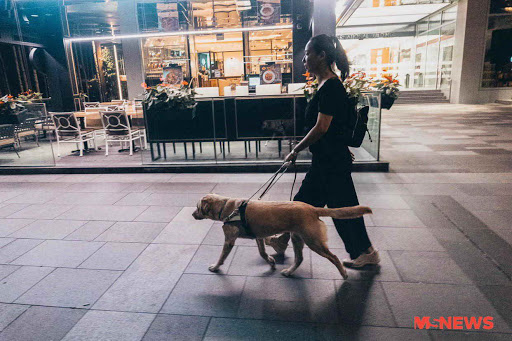 Traffic lights were a challenge though. I noticed that the traffic light beeper – the sound we hear which signals the ‘green man’ – wasn’t working. Cassandra shared that the beeper isn’t switched on at certain times, such as early in the morning or late at night.

Hence, she has to be extra cautious when crossing the road. 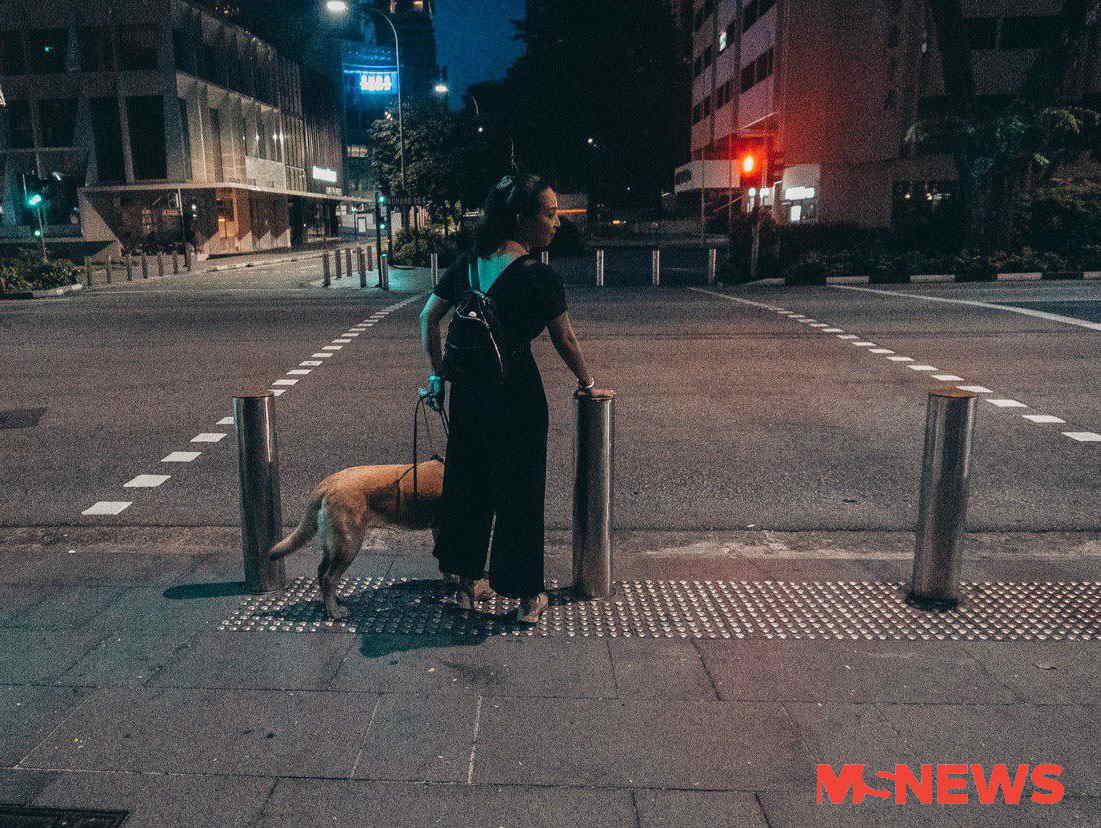 Along the route, Cassandra gives hand and verbal signals such as “left”, “right”, or “straight” to let Elke know where she wants to go. And when they encounter any stairs, Elke will stop at the top or bottom to warn Cassandra. 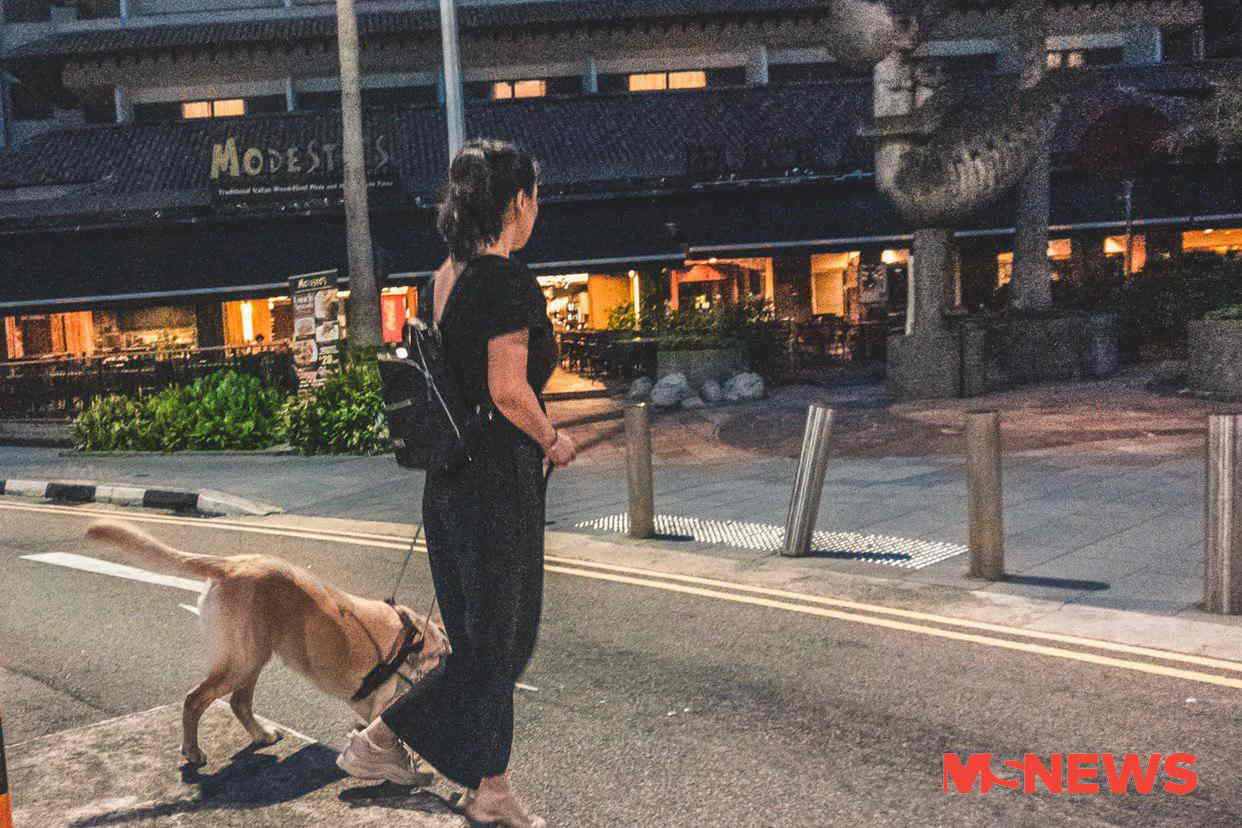 It was a beautiful relationship of mutual trust and interdependence as the pair relied wholly on each other to get around — Cassandra as the GPS, and Elke as the pair of eyes, always watchful of her master’s steps.

We were nearing our destination when Cassandra stopped near a grass patch. It was time for Elke to pee. “Guide dogs pee only upon command,” she explained. After Elke was done, Cassandra proceeded to put Elke’s harness back on, an essential identification that sets guide dogs apart from pet dogs. On guide dogs & support for the blind community

After climbing up four flights of escalators which weren’t running since it was still early, we finally reached Cassandra’s office.

Cassandra removed Elke’s harness and the retriever instantly went into ‘play’ mode, reminding us that besides performing her duty, she is still an energetic and playful puppy. In the office, Elke had a cushion on the floor, complete with blankets and a few toys, including an adorable dog plushie that was basically a mini version of her. As Cassandra didn’t have any clients to meet then, we sat down and chatted. Elke was her second guide dog. She got her first one, Esme, back in 2011. Esme is currently retired, and Cassandra will bring Elke to visit her sometimes. Look at how excited Elke is to meet Esme!

Since she had the rest of her day free, Cassandra’s next stop was the supermarket, to stock up on some beverage for her office. Elke couldn’t help her with picking out the items she wanted, but she had another handy companion, a handphone app called Seeing AI, developed by Microsoft.

The app allows her to identify products by audibly describing the object that her phone camera is pointed at. It’s heartening to see that technology does good by helping individuals like Cassandra be more self-sufficient.

Bringing a guide dog on the MRT

After returning to the office to drop off the items, it was time for Cassandra to head home to do some household chores.

The journey from her office involves changing MRT lines twice from Orchard. Fortunately, it wasn’t the peak hour yet, so the trains weren’t too crowded. 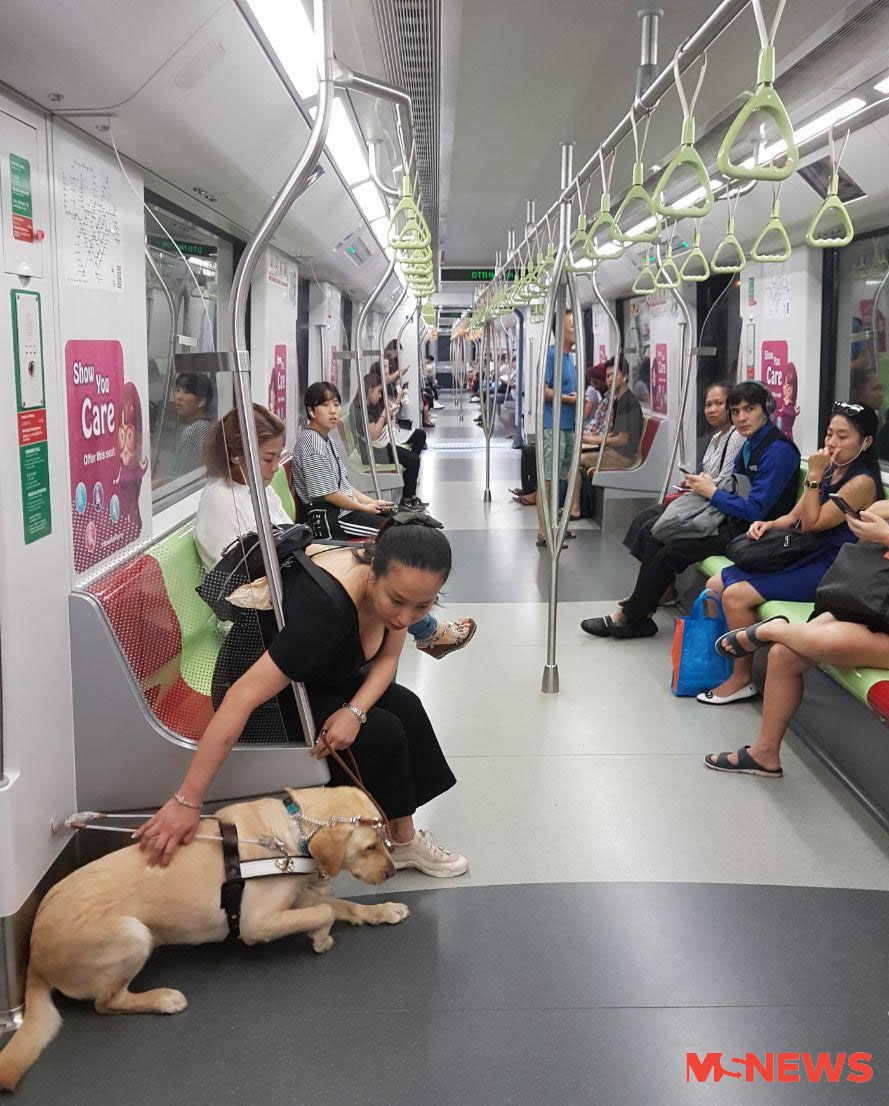 Apart from curious looks, the route home was largely uneventful, until we entered Bukit Panjang LRT, where a woman insisted on alerting the station staff about Elke.

Fortunately, a fellow commuter stepped in to explain that Elke was a guide dog, and the woman eventually understood.

Cassandra claimed that she occasionally encounters issues like this, but all will be well once misunderstandings are cleared up.

Creating an inclusive society for all

Throughout the day, we saw for ourselves the commotion that occurred wherever Cassandra and Elke went, especially in more crowded places.

In our society where guide dogs are not a common sight, it is understandable to take a few more glances whenever we see them around. We should, however, not distract them while they’re on the job. The simplest thing any of us can do is to respect the space that individuals like Cassandra and her guide dog Elke need to move around independently.

To that end, it is vital to empower the disabled community among us to take charge of their own lives – in their own ways – so they can live their lives with dignity.

We are each unique individuals with our own set of challenges to face. Only when we learn to understand those who may be different from us, can we create an inclusive society for all. That way, we can truly progress together as one Singapore.