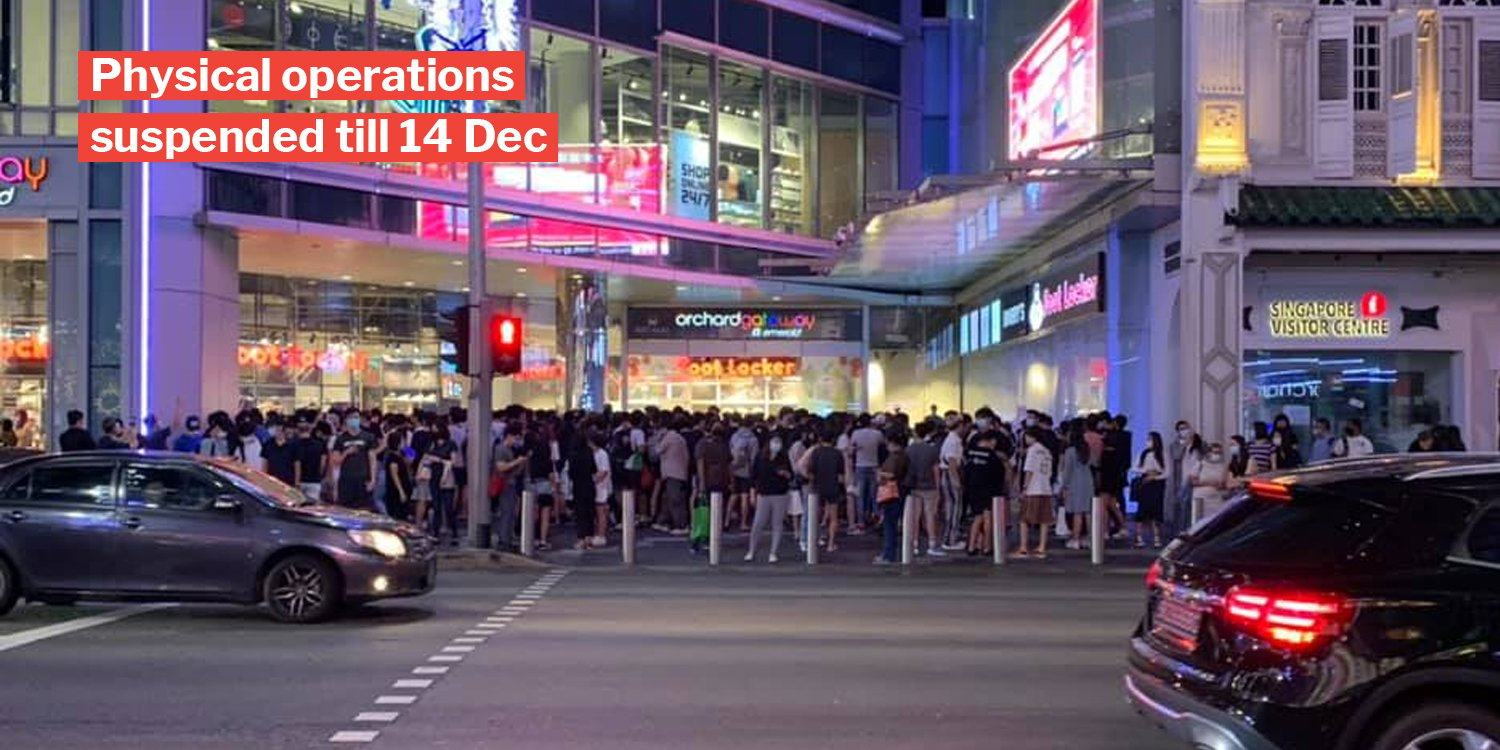 Update (4.50pm, 5 Dec): The Foot Locker outlet at Orchard Gateway @ Emerald has been told to suspend operations for a period of 10 days until 14 Dec.

This came after the store was found to have breached Covid-19 safe management measures.

Though physical operations are not allowed at the outlet, online sales are still permitted.

Bonafide sneakerheads would go to great lengths to get their desired kicks, including queueing for hours and camping online to ballot for those elusive shoes. 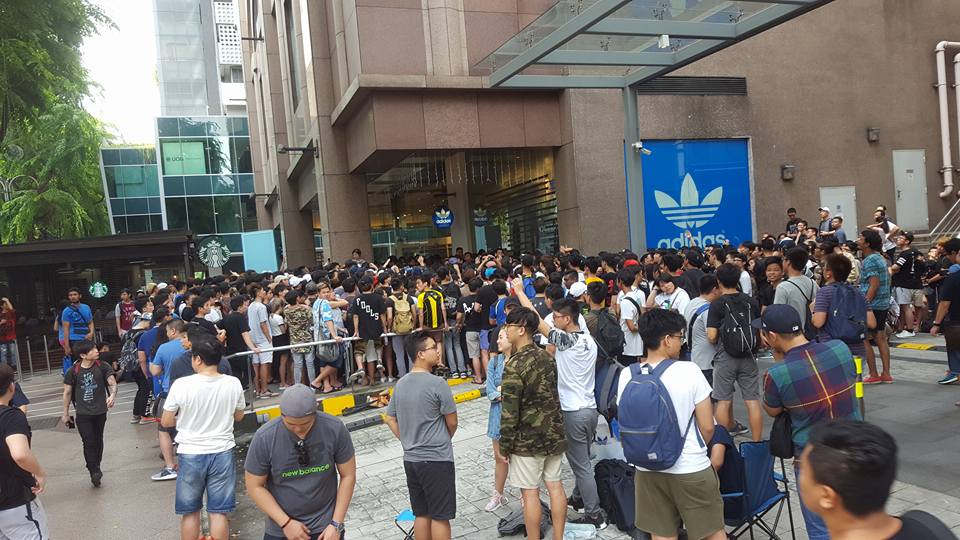 On Friday (4 Dec), however, sneaker fans who had gathered at a shoe retailer in Orchard outlet found themselves being dispersed after they were found to have breached Covid-19 regulations. 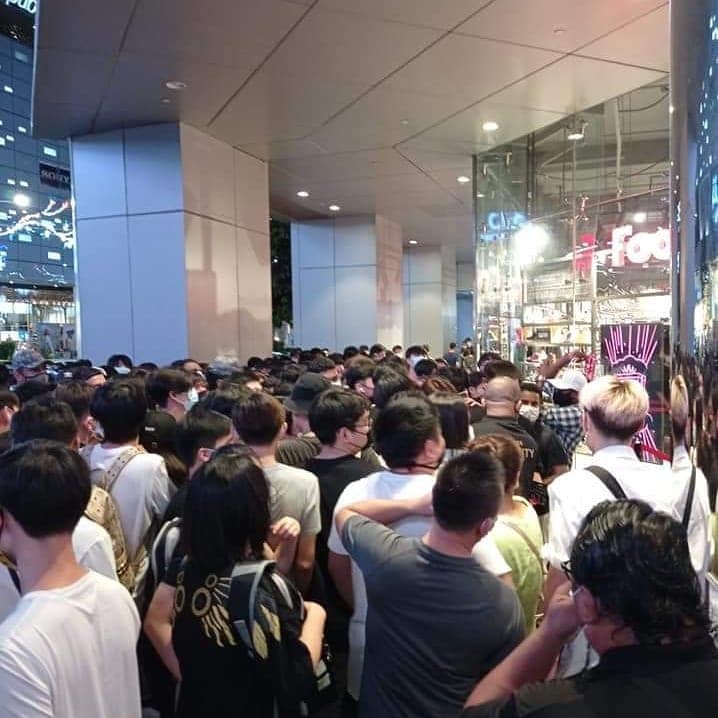 Foot Locker, the store in question, is currently under investigations for hosting events that would draw large crowds.

According to The Straits Times (ST), a crowd of around 100 people had already gathered at the Orchard Gateway sneaker outlet at around 8am. 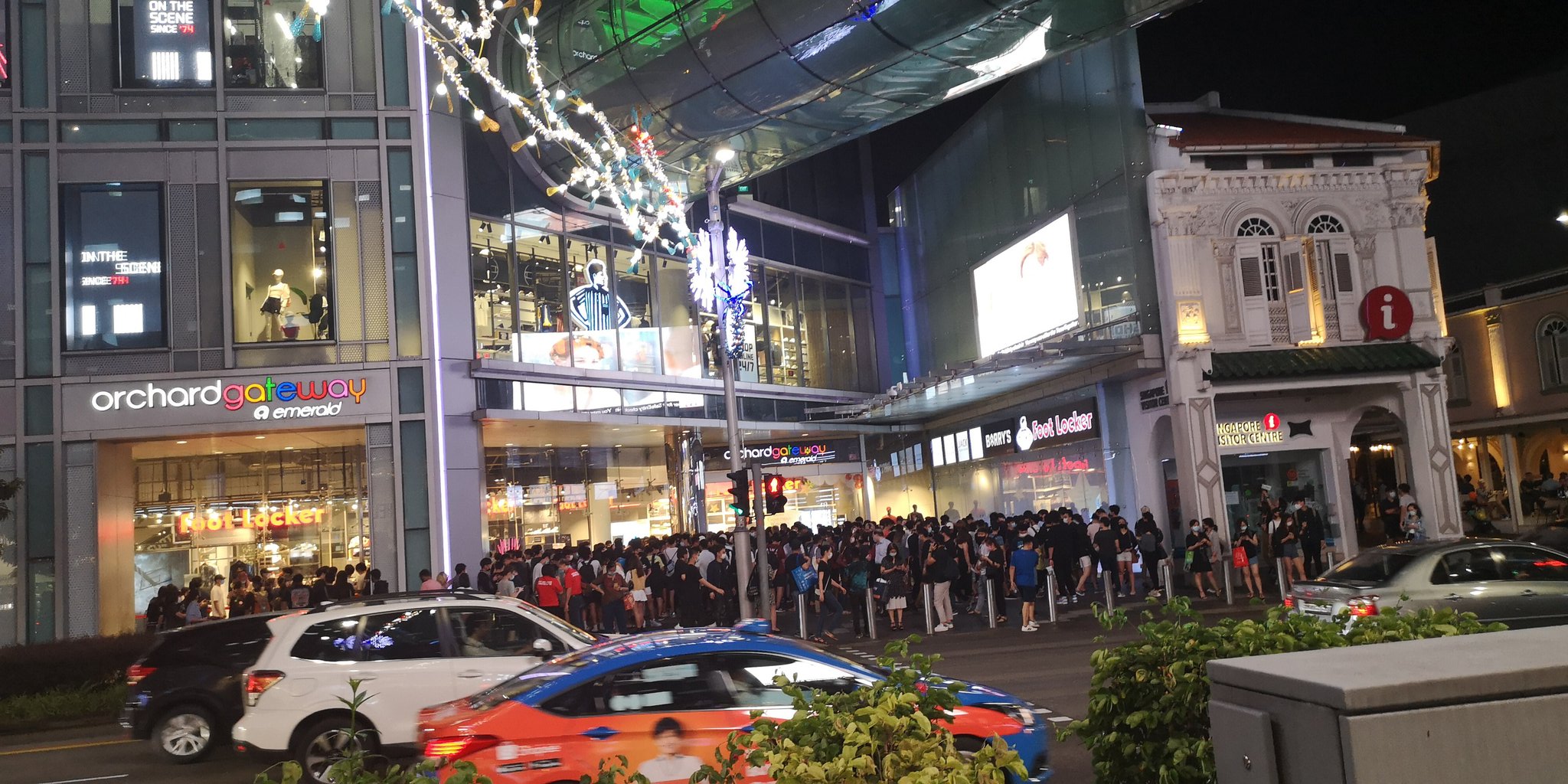 Pictures online show that those in the crowd were in extremely close proximity to one another. 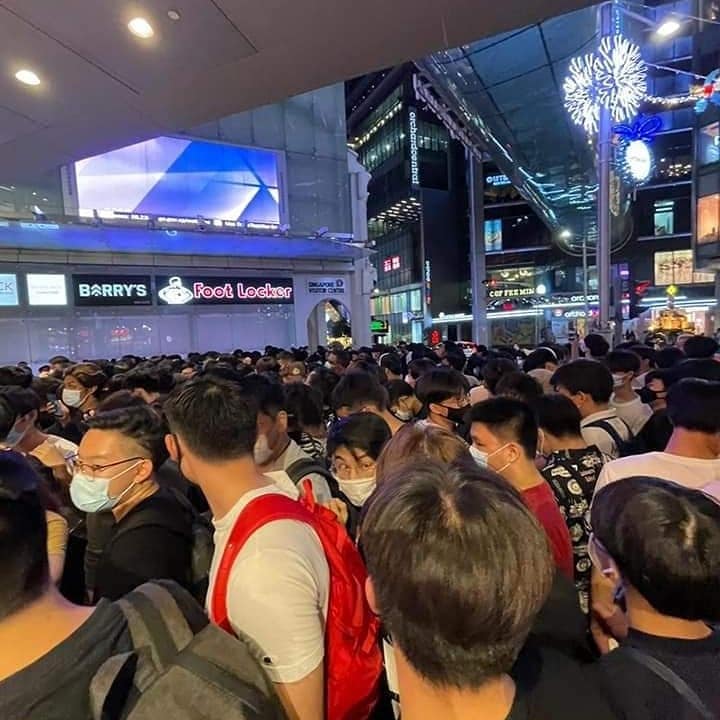 The crowd had apparently gathered there for a chance at snagging a “limited-edition Adidas sneakers”, which appears to be the black and red version of the Yeezy Boost 350 V2. 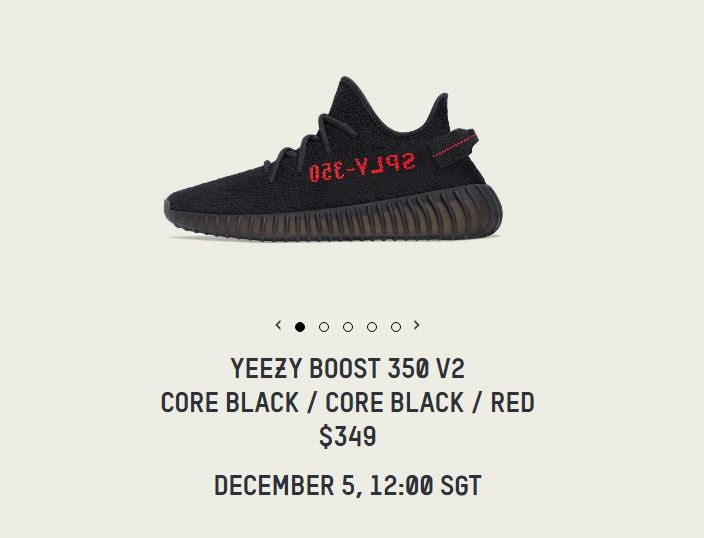 At around 8.30pm, Safe Distancing Ambassador and police officers were dispatched to the scene and the crowd soon dispersed.

The area outside the Foot Locker outlet was also cordoned off. 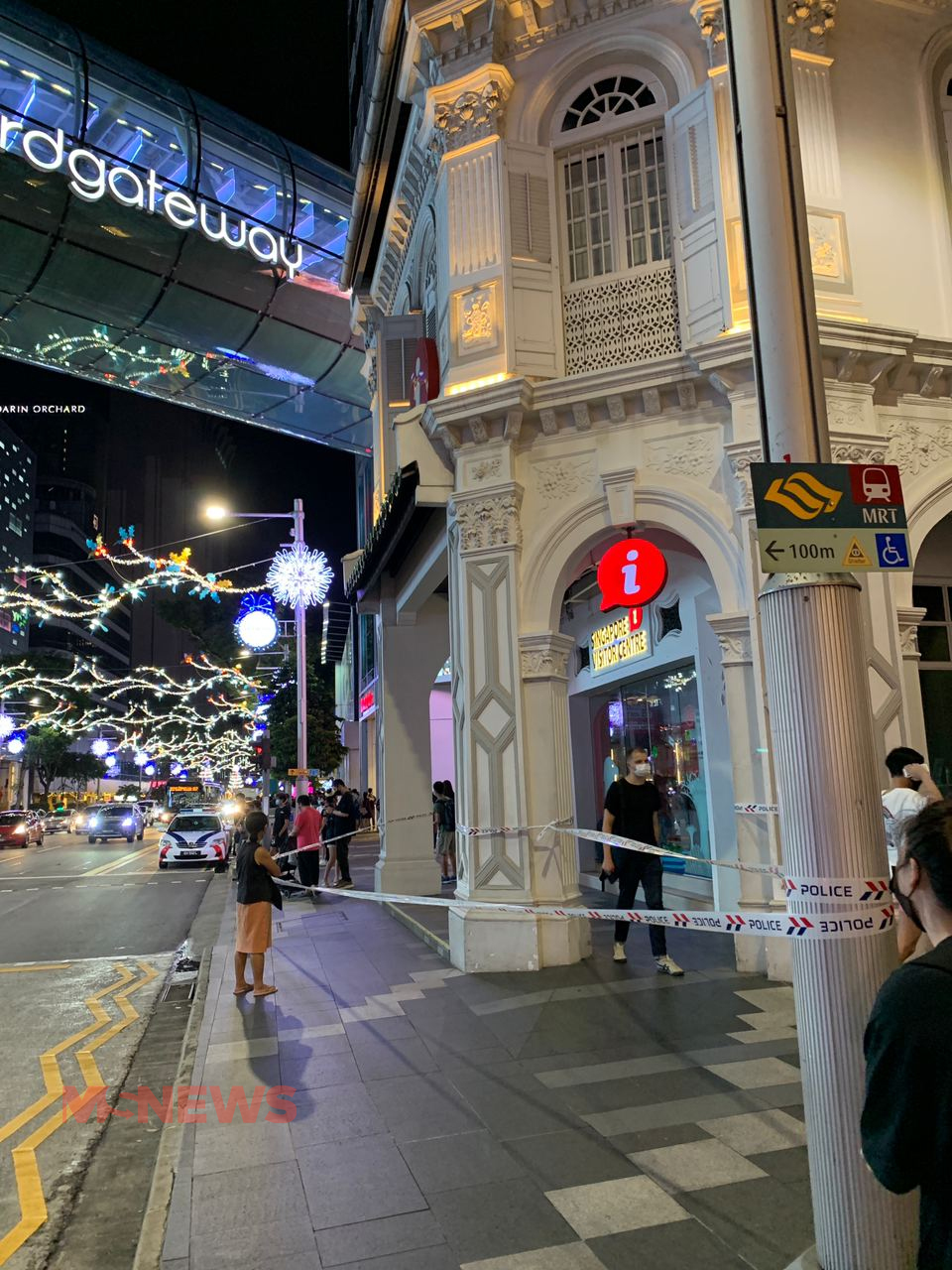 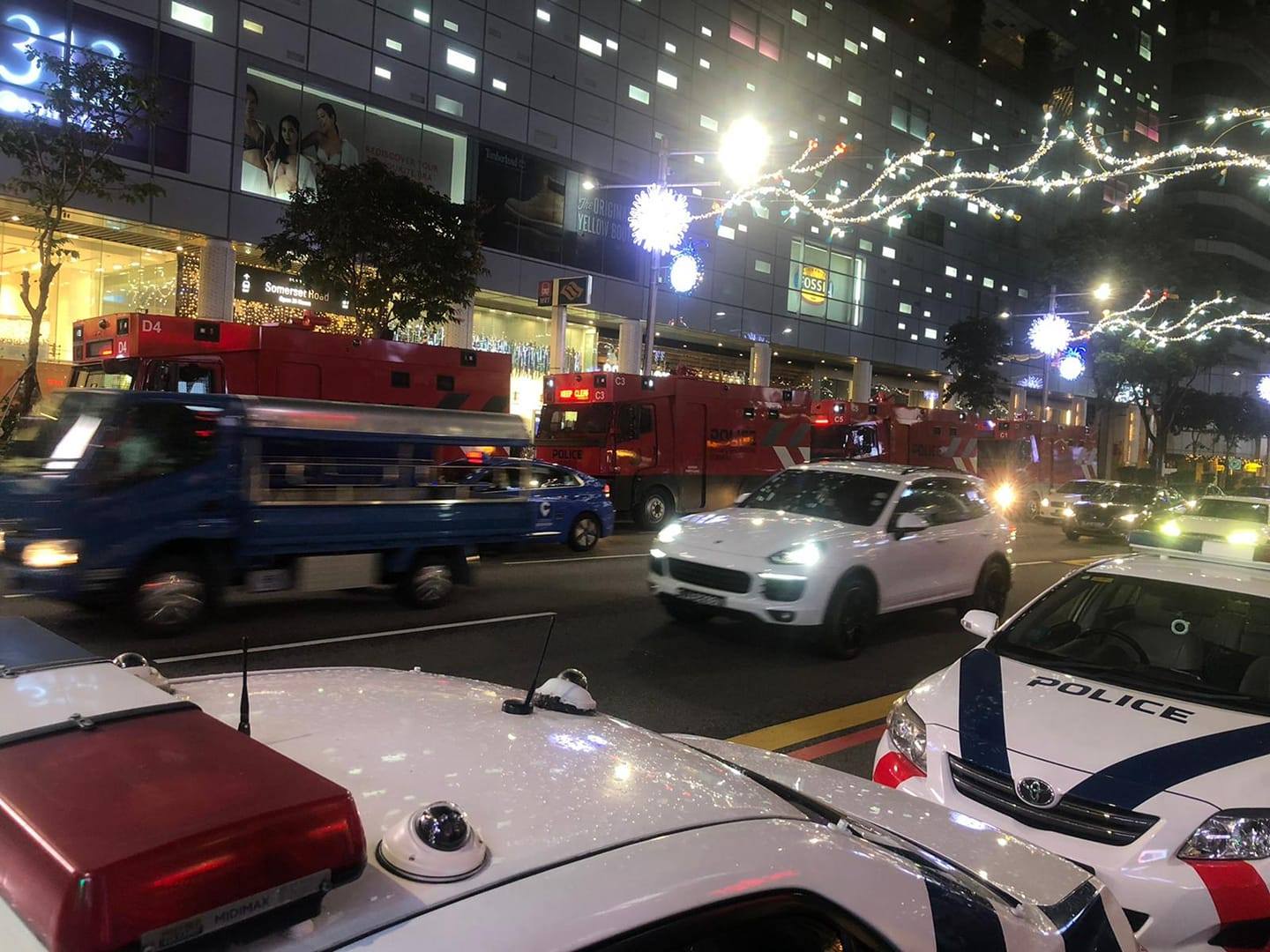 On Saturday (5 Dec) morning, the Singapore Tourism Board (STB) said that investigations are underway.

They elaborated that Foot Locker has received numerous advisories in the past about crowd management, but continues to organise events that would “draw large crowds”.

STB warned that they will not hesitate to take actions against individuals and business establishments that breach safe management measures.

Streetwear community calls for such events to be done differently

Since then, members of the streetwear community have called on Foot Locker to organise such events differently.

Sole Superior SG, in particular, took to Instagram to share how holding such events physically could put consumer’s health at risk and also shines a bad light on the streetwear community. 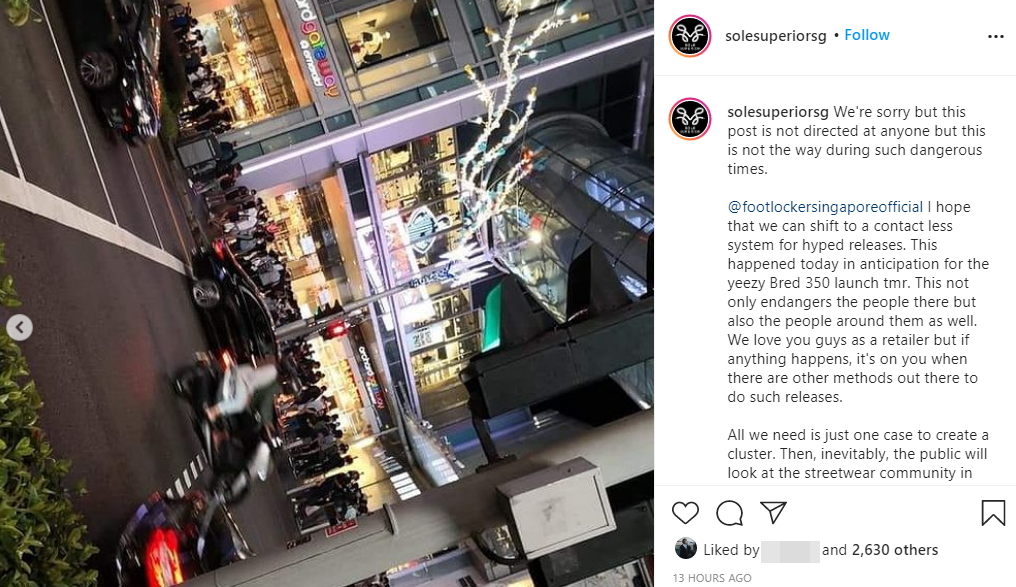 Another netizen shared on Facebook that if food establishments had been shut for breaching Covid-19 measures, the same punishment should be served to retailers as well. 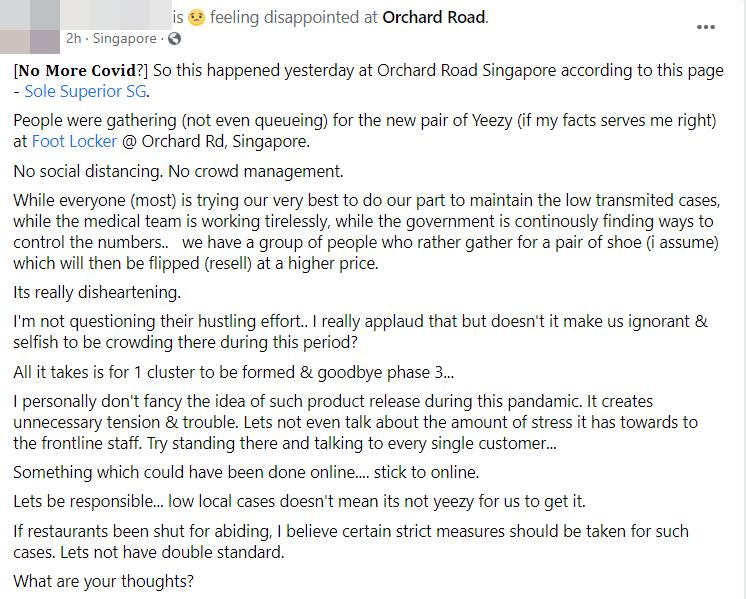 Worrying to see such large crowds

It’s worrying to see such large crowds happening in the midst of a pandemic.

Though Singapore has seen a low number of local cases in recent weeks and months, we cannot afford to be lax about it and putting to waste months of efforts spent combatting the virus.

We hope Foot Locker, as well as other establishments, would be more mindful when organising events in the future.