Whatever your feelings about mainstream media such as The Straits Times, there’s no doubt that Singapore Press Holdings (SPH) is the biggest media company in Singapore.

However, they’ve apparently fallen on hard times – their profits were already down for 2019, but the full extent of their profit cuts were made known in their most recent financial report, released Monday (13 Jan).

An ex-SPH financial reporter shared his thoughts on the lowered profits in a Facebook post made Tuesday (14 Jan). 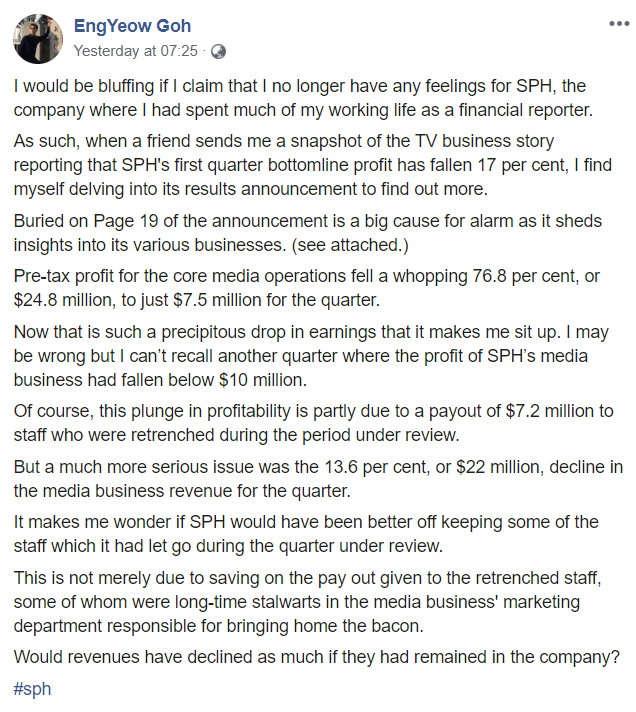 Goh Eng Yeow, who was a financial reporter for SPH and left in 2017, commented that the drop in profits, especially in the media business area, was “precipitous”.

SPH profit drop a “big cause for alarm”

Mr Goh had found out about the loss of profits from a friend, and went to take a closer look at the numbers.

What he saw astounded him. This may have been the biggest profit drop in the history of price drops for SPH.

The loss in profits includes $7.2 million in payouts for retrenched staff, which amounted to 5% of employees.

Mr Goh points out that these payouts have cut into SPH’s media profits, which is understandable.

However, he then questions whether these staff should have been cut after all, seeing the final profit margin.

Some of them, he points out, were in the marketing department for many years, and they would have been responsible for bringing in sales – which would have increased profits.

Hence, Mr Goh wonders if them being let go contributed to this decreased number.

Would revenues have declined as much if they had remained in the company?

SPH has to focus more on media to stay relevant

The revenue drop in the media section should be concerning to SPH. While they have diversified into the property industry, people do not know SPH for property. They are a media company first and foremost.

SPH CEO Ng Yat Chung attributed the losses and subsequent firings to the global economic downturn, but it cannot contribute this heavily to profit being this low.

Whether Mr Goh is right or not, the retrenchments may not be enough to steer what may be fast becoming a ship with a gaping hole.

Featured image adapted from The Drum.