They bowed a second time after crossing the road.

Oftentimes, we would raise a hand in appreciation to drivers for stopping at a crossing. Although it’s a small gesture, most drivers surely appreciate it nonetheless.

2 young children took their show of thanks to the next level by bowing to a driver for stopping at a crossing in Sengkang.

The 2 students in school uniform, who also held up their hands before crossing, managed to bow while making their way briskly to the other side of the road.

Netizens who watched the dashcam footage of the wholesome gesture commended the pair and their parents for bringing them up well.

The video in question was posted on the ROADS.sg Facebook page on this morning (7 Jan).

The dashcam footage follows a vehicle along Anchorvale Link in Sengkang until it approaches a zebra crossing that 2 students were standing at.

After seeing the young boy raising his hand first to signal his intention to cross, the driver stopped to let the pair of students do so. 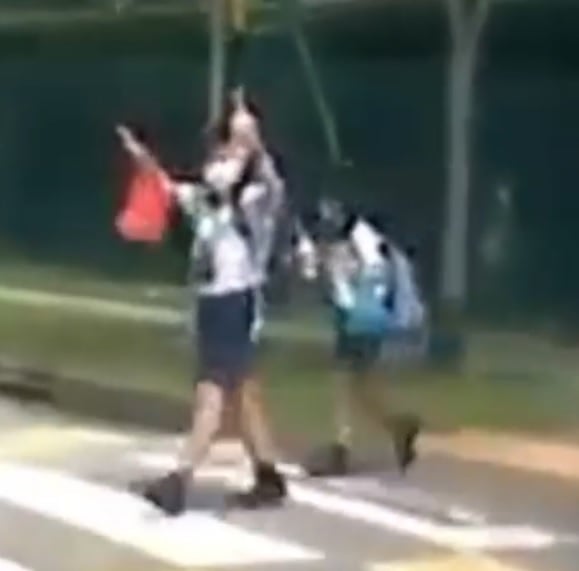 When the driver came to a stop, the duo quickly made their way across the crossing.

Students bow twice to driver for allowing them to cross

Despite seemingly balancing snacks and drinks in both hands, the young boy decided to take a deep bow towards the driver for stopping.

The young girl who was tagging not too far behind followed suit.

As they reached the end of the crossing, the pair took one final bow to show their appreciation once again. 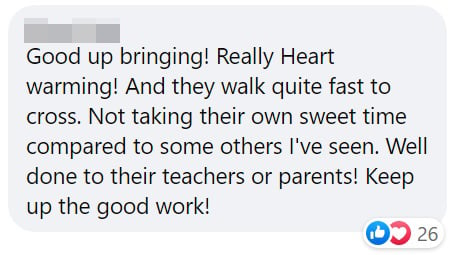 Another comment praised the children’s upbringing as they were also mindful of walking quickly to avoid holding up traffic.

Many other netizens also pointed out that this is a common sight in Japan, where the habit of bowing is the usual etiquette.

Kudos to their parents for raising them well

This heartwarming sight would surely brighten up a driver’s day.

The students’ initiative to show their appreciation to the kind driver, to many people, is a testament to their good upbringing.

Kudos to their parents for raising them well, and we hope that more people will be inspired by them to act kindly towards others too.