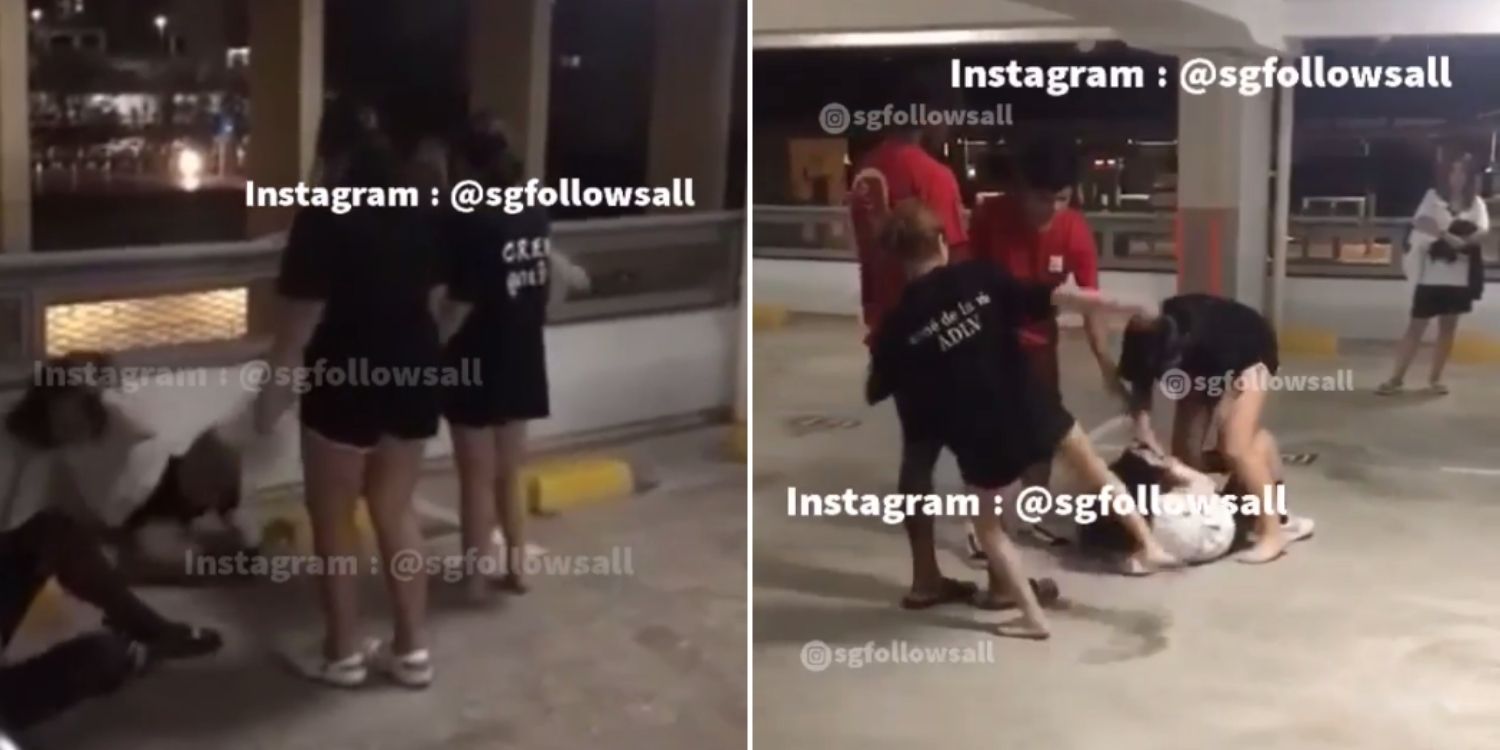 The victim had allegedly been the third party in a relationship.

UPDATE (18 Aug, 4pm): In a report today (18 Aug), Stomp quoted a police statement confirming that they received an alert regarding an alleged assault against a female teenager. The teen sustained injuries but didn’t need to be conveyed to the hospital immediately.

Ganging up on a single person is a cowardly way of dealing with a situation, especially when the intent is to hurt someone.

Recently, a video emerged of three female assailants combining forces to beat up another girl at a car park after learning that the latter had allegedly “broken up a relationship”.

As the beating continued, two boys dressed in Jurong Secondary School shirts were seen observing the action before one of them stepped in to shield the victim.

The attack was so vicious that by the end of it, the victim’s mouth was apparently bleeding.

On Wednesday (17 Aug), videos of a group of female youths beating up a girl at a car park surfaced online.

One user compiled all three videos together in a single Facebook post, showing the incident in its entirety.

From the first clip, we can gather that the victim was allegedly the third party in a relationship. It is unclear if the girl whose relationship was affected is in the video as well.

The victim sits on the floor with both knees up to her chest as the three other girls grill her with questions.

One of the assailants, a girl with brown hair, appears calm at first but suddenly kicks and throws slippers at the victim.

These attacks are aimed at the victim’s head, much to the amusement of the others.

In the second video, her attackers raise a phone as it seemingly plays a voice recording of an unknown person.

After a few seconds, one of the attackers empties a bottle of liquid on the victim. She then looks at the camera, apologising with a smile.

Apparently, the voice recording mentions the victim badmouthing an unknown person. This ticks off the last of the three attackers, who does a high kick on the victim.

The attacker with brown hair then pulls the victim down to the ground by her hair.

When the attacker falls after delivering a kick, the victim seizes the opportunity to escape and runs to hide behind one of the boys in red, who is watching the incident.

The video ends as the victim backs away from her attackers while hiding behind the boy in red.

Victim hides behind boy after teens assault her at car park

In the last of the three videos, the attackers continued to rain blows on the victim, but the boy in red does not offer much protection.

Without much effort, her attackers get behind the boy and continue to kick the victim when she’s down on the ground.

One of the attackers grabs the victim by the hair and continues hitting her head.

After leaving one last kick for good measure, two of her attackers back off as the girl hides behind the boy in red again.

The video ends with someone pointing out that the victim’s mouth is “bleeding” and that she’s had “enough”.

Citing a police statement, Stomp reported that the police got wind of an alleged assault “by a group of three females against a female teenager” at around 9.26pm on Tuesday (16 Aug). The incident apparently occurred at the multi-storey car park at Blk 269 Compassvale Link in Sengkang.

The victim, who walked away with injuries, reportedly didn’t require immediate conveyance to the hospital. However, she did independently seek medical attention after the incident.

The police also believe that all parties involved know each other, noted 8world News.

According to TODAY, police investigations into the alleged assault are ongoing.

Boys’ shirts identified to be from Jurong Secondary School

Photos on the school’s website do show students in similar clothing, supporting the claims. 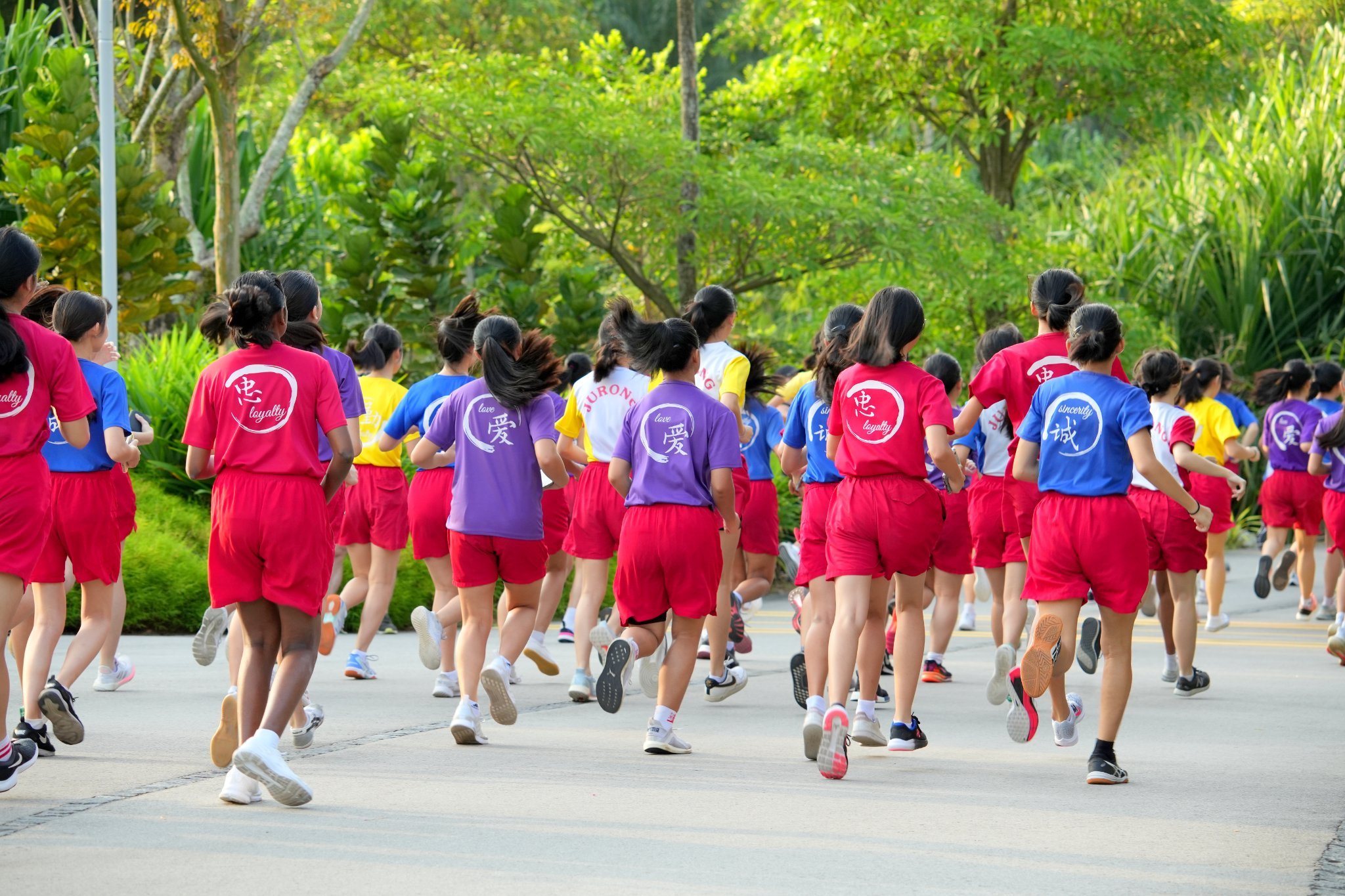 MS News has reached out to Jurong Secondary School for a comment and will update the article accordingly.

Shame on the attackers and idle bystanders

It’s hard to watch anyone become the target of such a brutal group assault like this, no matter the reason.

Shame on the attackers, as well as the boys who stood idly by as they watched the girl get beaten up like that.

Hopefully, the youths in these videos will face consequences for their actions once more details come to light.