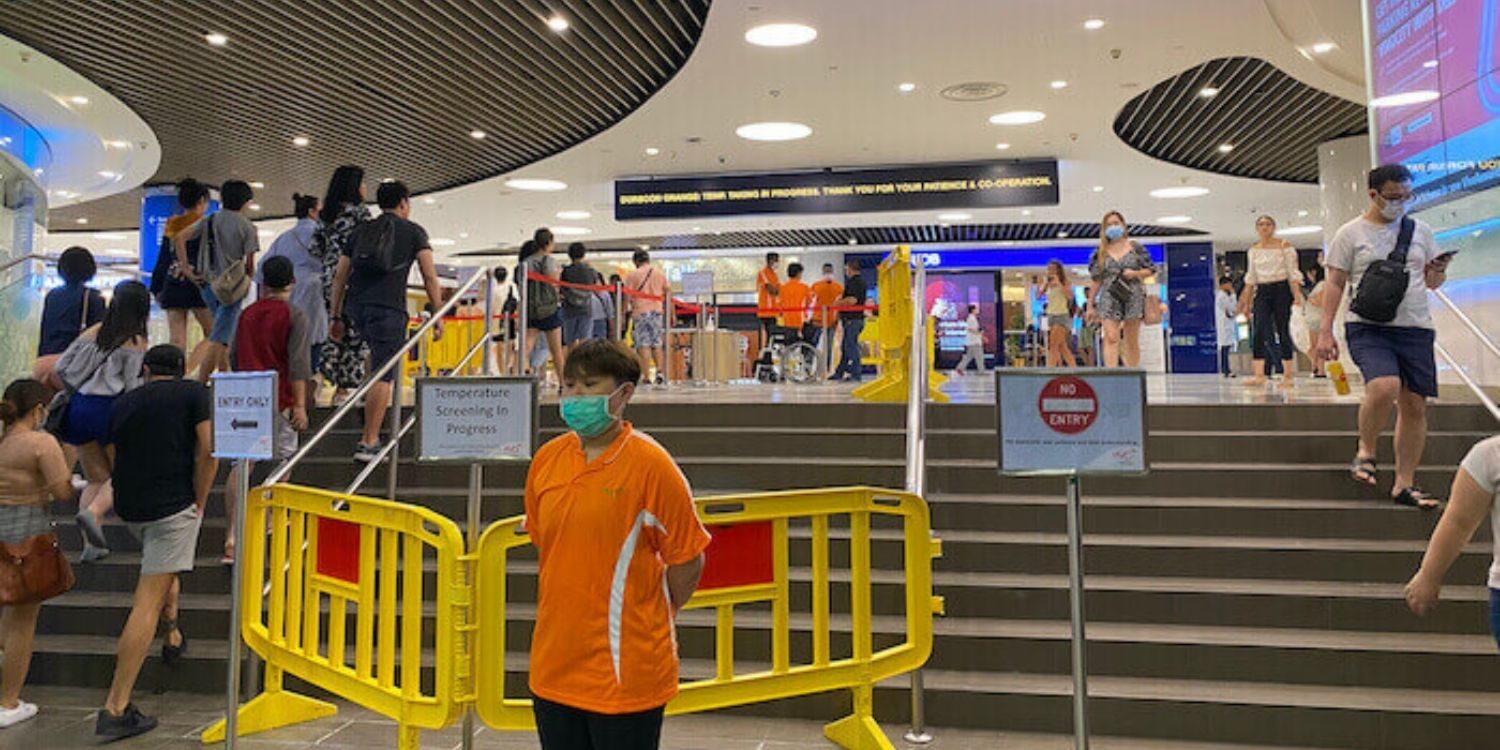 Losing sight of your child is a nightmare no parent would want to live, especially for parents of children with disabilities.

Unfortunately, this was exactly what the mother of a boy with autism had to endure recently, when her son ended up wandering from Punggol to VivoCity.

She shared her story in Facebook group “Friends of ASD Families” on Tuesday (6 Oct). 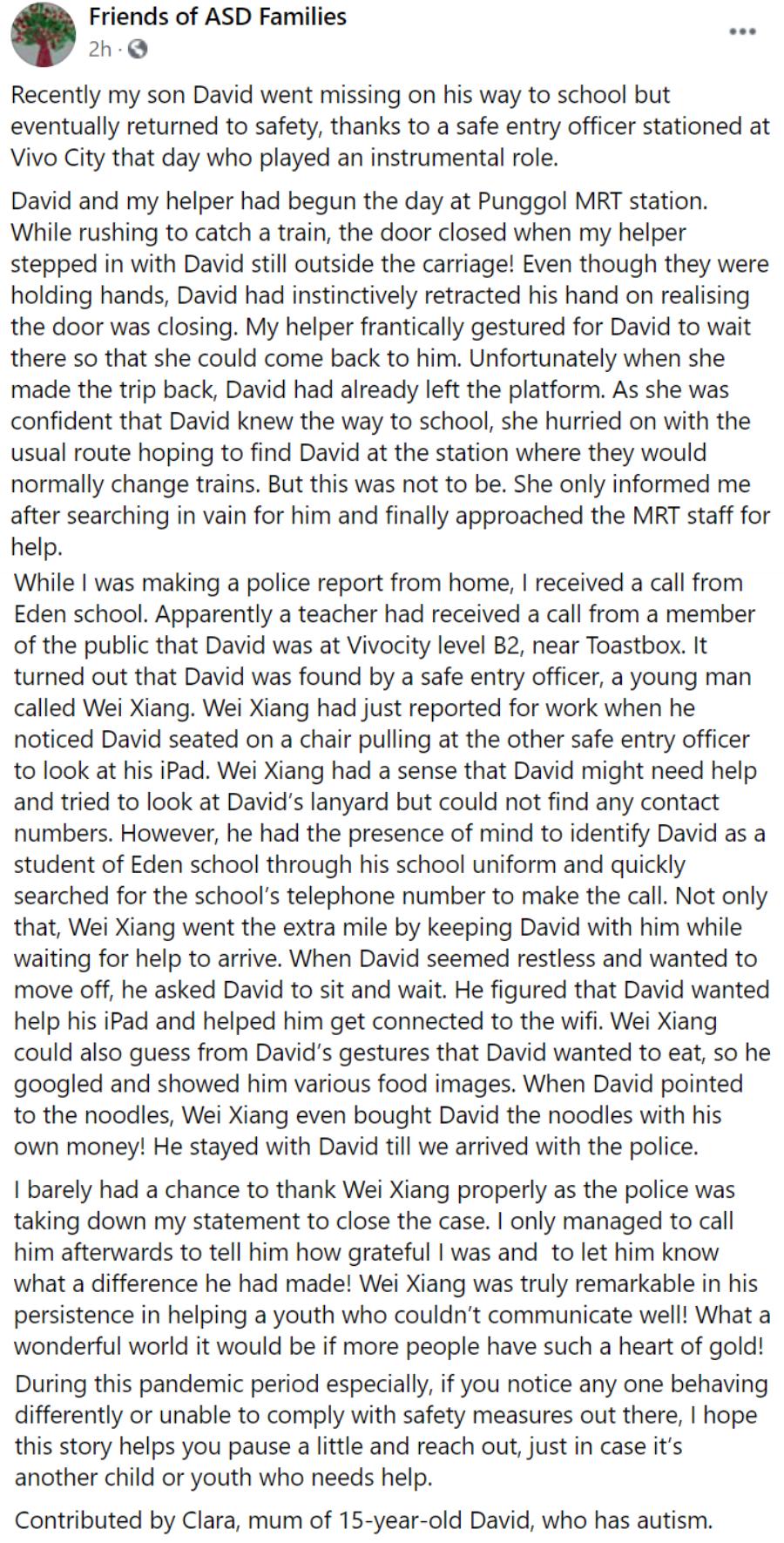 Luckily for her, a kind SafeEntry officer knew just what to do, and ensured that her son was safe till she came to fetch him.

You may read the full post here, but we’ll summarise it for you.

The fateful day began like any other, when her son David and their helper waited for a train at Punggol MRT station. 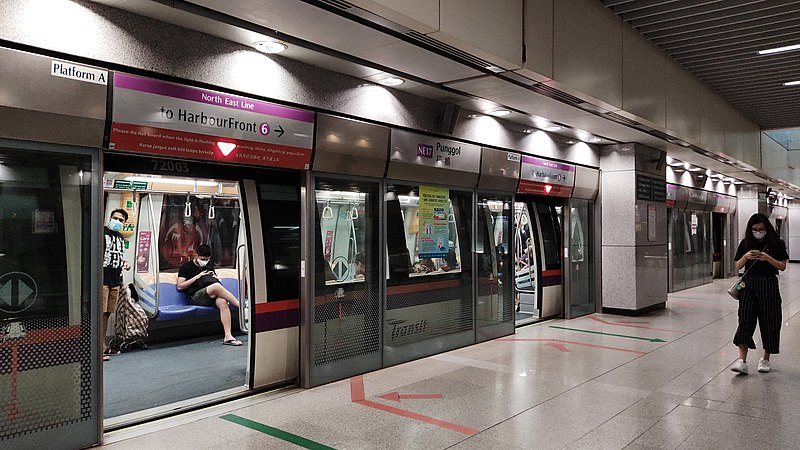 The rush to make it into a carriage, however, was unkind to them that day, when the helper managed to get on, and David didn’t.

The 15-year-old had apparently let go of her grip when he saw the doors closing, sending the helper into panic mode.

She gestured to David to stay put, while she made her way back from the next station, but was horrified to see him missing later.

Thinking that he had taken the train to their usual station, she hopped on the next one and alighted there, but still saw no signs of David.

It wasn’t until a frantic search proved to be in vain, and a plea for help to the MRT station staff that the helper finally called her employer.

David’s mother, Clara, promptly called the police, at which point she received a call from his school.

A member of the public had apparently spotted the student decked in his school uniform at Basement 2 of VivoCity, near a Toast Box outlet. 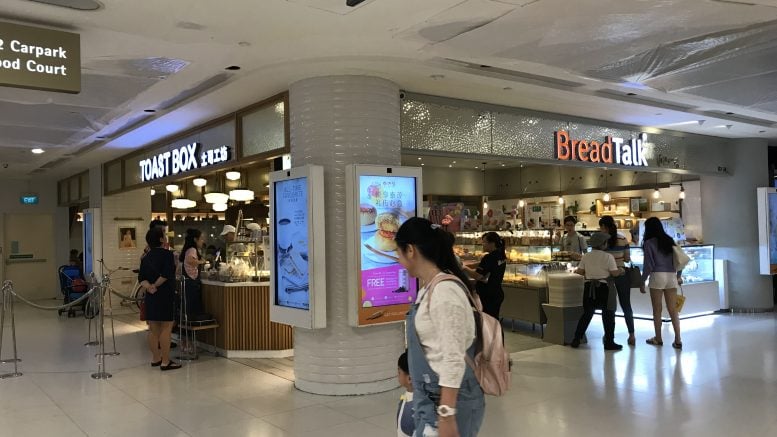 More heartwarming details of the boy’s discovery soon followed, of a young SafeEntry officer who went out of his way to ensure David was safe and comfortable.

According to the school staff, the officer identified as Wei Xiang had noticed David sitting on a chair and trying to get the attention of his colleague.

Sensing that the boy may need help, Wei Xiang approached David and inspected his lanyard, but couldn’t find any contact details.

His quick thinking urged him to look up David’s school online and find their contact number, which he called immediately.

While waiting for help to arrive, Wei Xiang managed to persuade the restless David to stay put. Realising that he wanted help with his iPad, the young man connected the boy’s device to a WiFi network.

He also observed that David was hungry, and Googled images of food so the boy could show what he wanted.

After David pointed at a picture of noodles, Wei Xiang didn’t hesitate to buy him some with his own money.

Though David’s mum Clara didn’t manage to thank Wei Xiang in person, she got hold of his number and expressed her sincerest appreciation over the phone.

Feeling immensely grateful for his patience and kindness, she also shares her wishes for the world to have more people like him.

Kudos to Wei Xiang for doing the right thing, and we’re glad that David is back home safe with his loved ones.