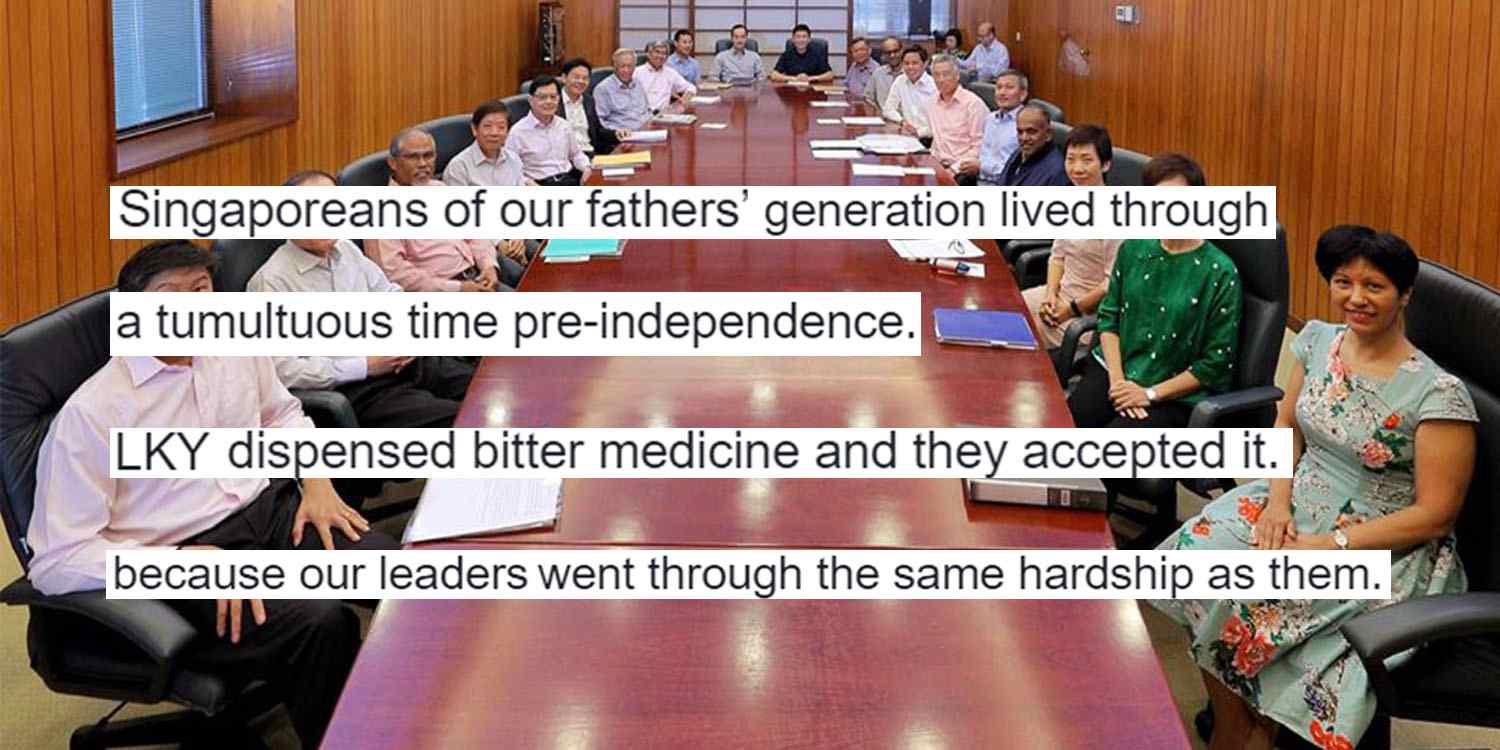 A man named Gerard Ong recently shared his take on why our 4G leaders can’t command the same amount of respect as LKY’s generation.

We summarise his post below, and try to uncover who the writer is. 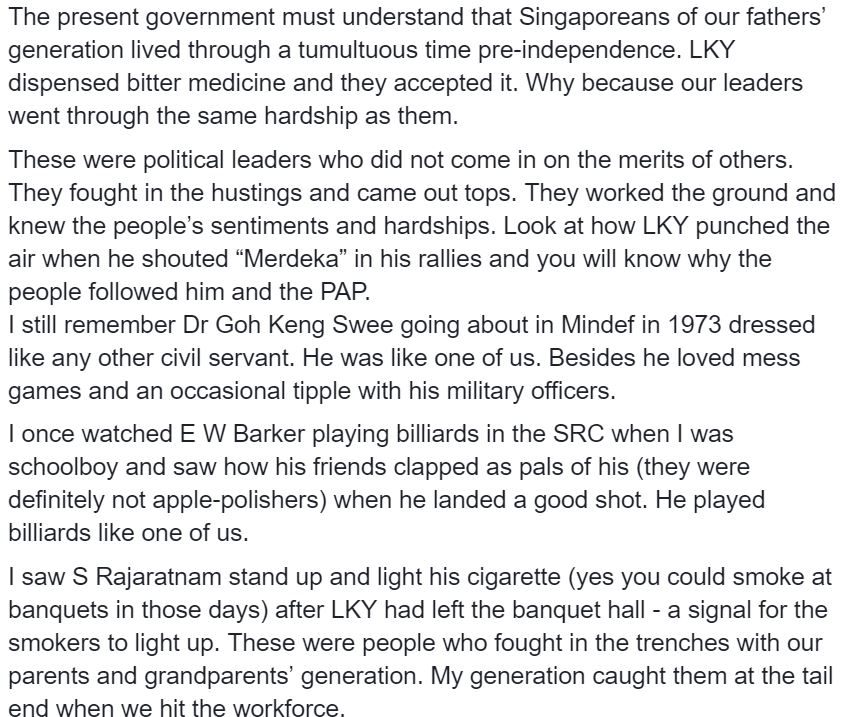 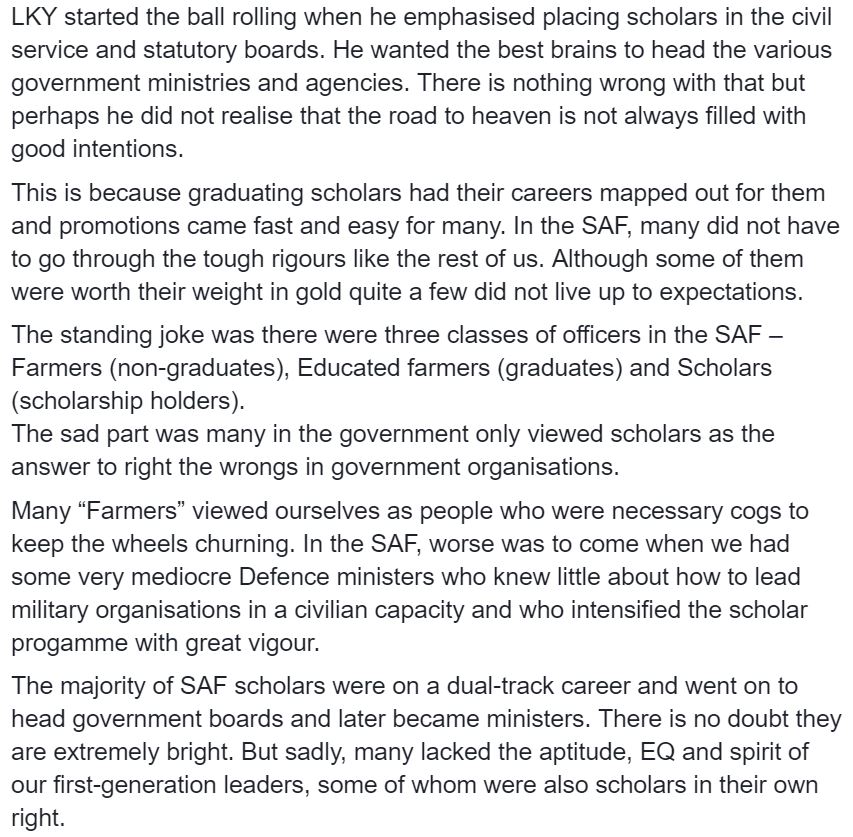 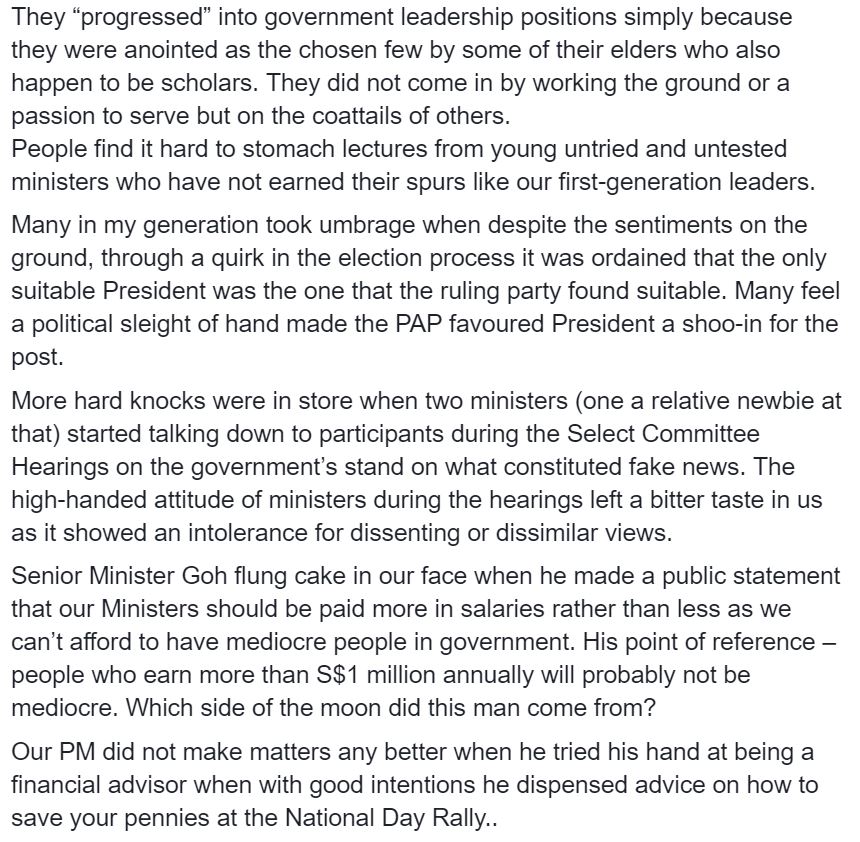 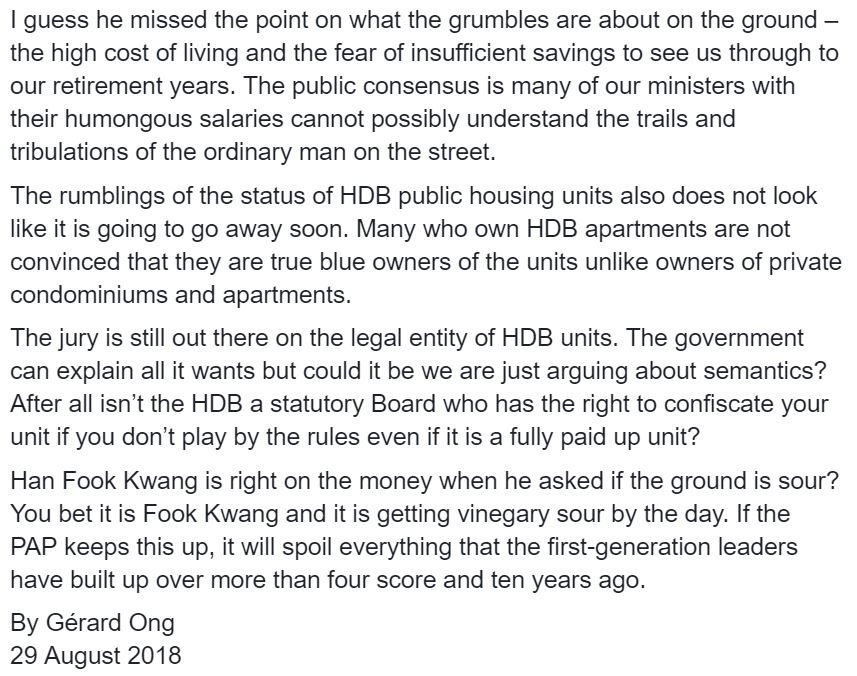 Gerard begins his post by framing his narrative. He reiterates that our forefathers “lived through tumultuous times” during pre-independence.

Since our leaders “went through the same hardship” as regular citizens, he added,

LKY dispensed bitter medicine and they accepted it.

Political leaders came to power by their own merits

Mr Ong stresses that these political leaders “did not come in on the merits of others”.

As they worked the ground and understood ground sentiments.

Gerard shared a few examples of such leaders being “like one of us”.

Fighting in the trenches

Gerard described these leaders as “people who fought in the trenches” with our parents and grandparents’ generation.

His generation benefited from the “tail end” of this era, when Mr Ong joined the workforce.

LKY placed scholars in civil service and statutory boards as he “wanted the best brains” to head the government.

Mr Ong described this policy with the analogy “the road to heaven is not always filled with good intentions”, and that the process backfired due to scholars enjoying “fast and easy” promotions.

In his own words, Gerard had this to say about scholar ministers,

Some of them were worth their weight in gold quite a few did not live up to expectations.

But there was a “standing joke” which used a farming analogy to describe SAF officers:

Gerard shared that many “Farmers” saw their role as “necessary cogs” to keep the wheels churning.

But that the SAF went on to have “some very mediocre Defence ministers” who intensified the scholar programme with great vigour.

These ministers went on to head departments in the government, but Mr Ong felt,

There is no doubt they are extremely bright. But sadly, many lacked the aptitude, EQ and spirit of our first-generation leaders.

Due to the nature of their rise to power, citizens thus found it “hard to stomach lectures from young untried and untested ministers”.

This was a stark contrast to first-generation leaders who worked the ground and had a passion to serve.

Issues like the ‘selected’ presidential election were considered a “political sleight of hand”, while ESM Goh Chok Tong’s statement about ministerial salaries & PM Lee Hsien Loong’s financial advice during the National Day Rally, didn’t go over so well with netizens.

As for HDB ownership, Mr Ong felt that many who own HDB flats “are not convinced” they are the true owners of their flats, despite the government’s many explanations.

Gerard elaborated on what he thought was the public consensus among citizens,

The high cost of living and the fear of insufficient savings to see us through to our retirement years.

Thus, it would be hard for regular citizens to believe that highly-paid ministers can “understand the trails and tribulations of the ordinary man on the street”.

Mr Ong then gives a shout-out to ST Editor Han Fook Kwang, who recently wrote an article questioning “if the ground is sour” on the Straits Times.

You bet it is Fook Kwang and it is getting vinegary sour by the day. If the PAP keeps this up, it will spoil everything that the first-generation leaders have built up over more than four score and ten years ago.

Who is Gerard Ong?

A quick search on Facebook brought up multiple posts circulating on WhatsApp, signed off as “Gerard Ong” as well.

To be fair, some netizens have sought to debunk his opinions as “typical potshots at our PM”, and that he lives “40 years in the past”. 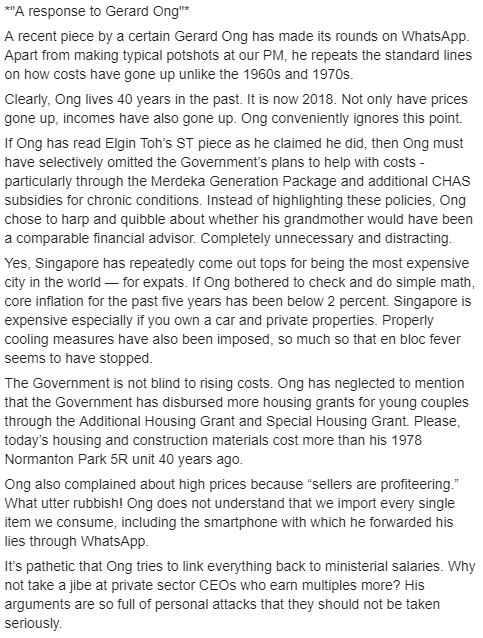 Do you agree with Gerard Ong’s views on how Singapore’s 4G leaders can better gain the respect of citizens?

Or is he another keyboard warrior that we should ignore on WhatsApp?

Opinion: Mid-Career Workers Are Underappreciated In S’pore, They Deserve Opportunities Too

I Was Helpless When My Mum Suffered Psychosis, Here’s What I Want S’poreans To Know About Mental Health