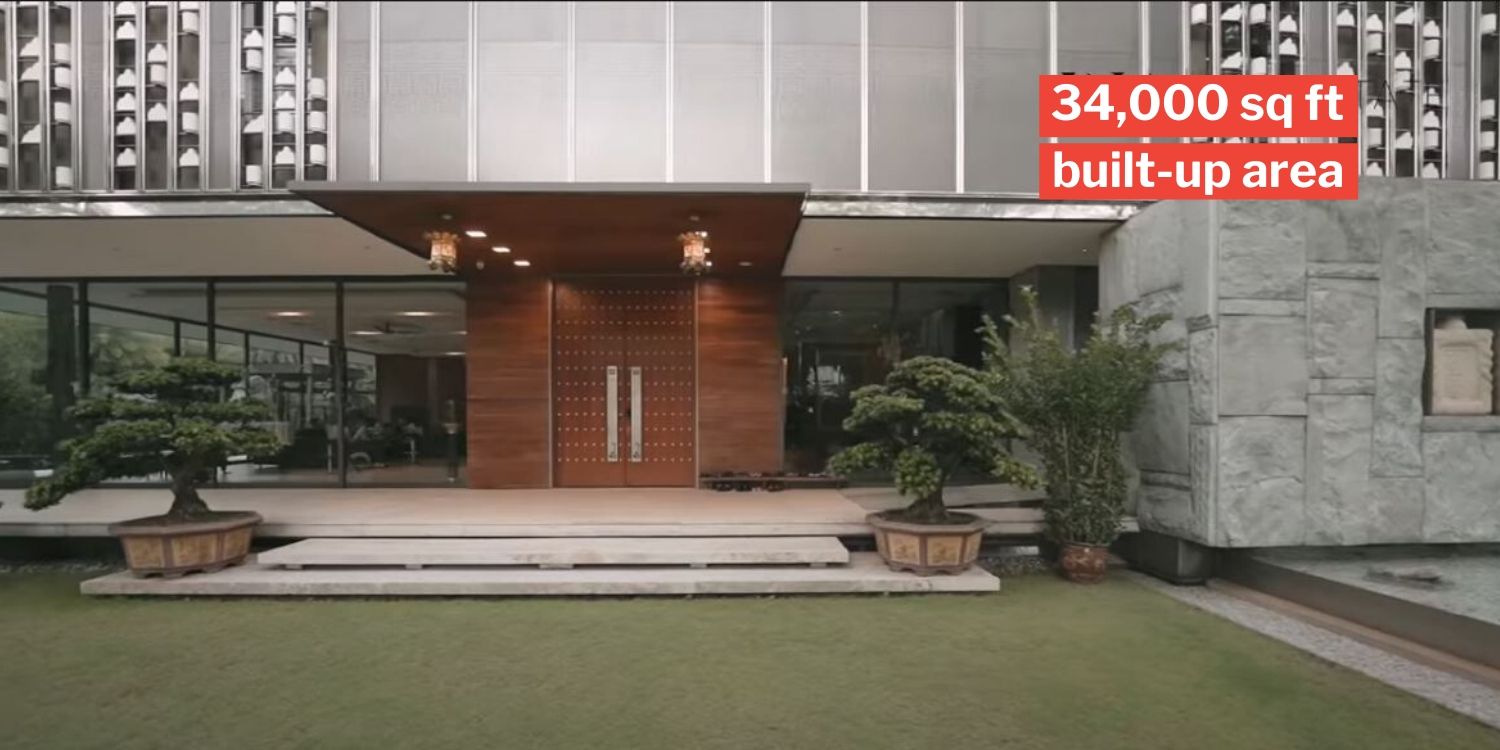 The Parasite house had one stone relic. This mansion has thousands.

This year, South Korean movie Parasite made history by being the first foreign-language film ever to win Best Picture at the Academy Awards.

Among the highlights of the Oscar-winning movie is the gorgeous but sinister mansion, which was custom-made for the movie.

Although it isn’t a real residence, we think we’ve found something that’s as close as it comes, right here in the heart of Singapore.

Here’s the iconic house from Parasite: 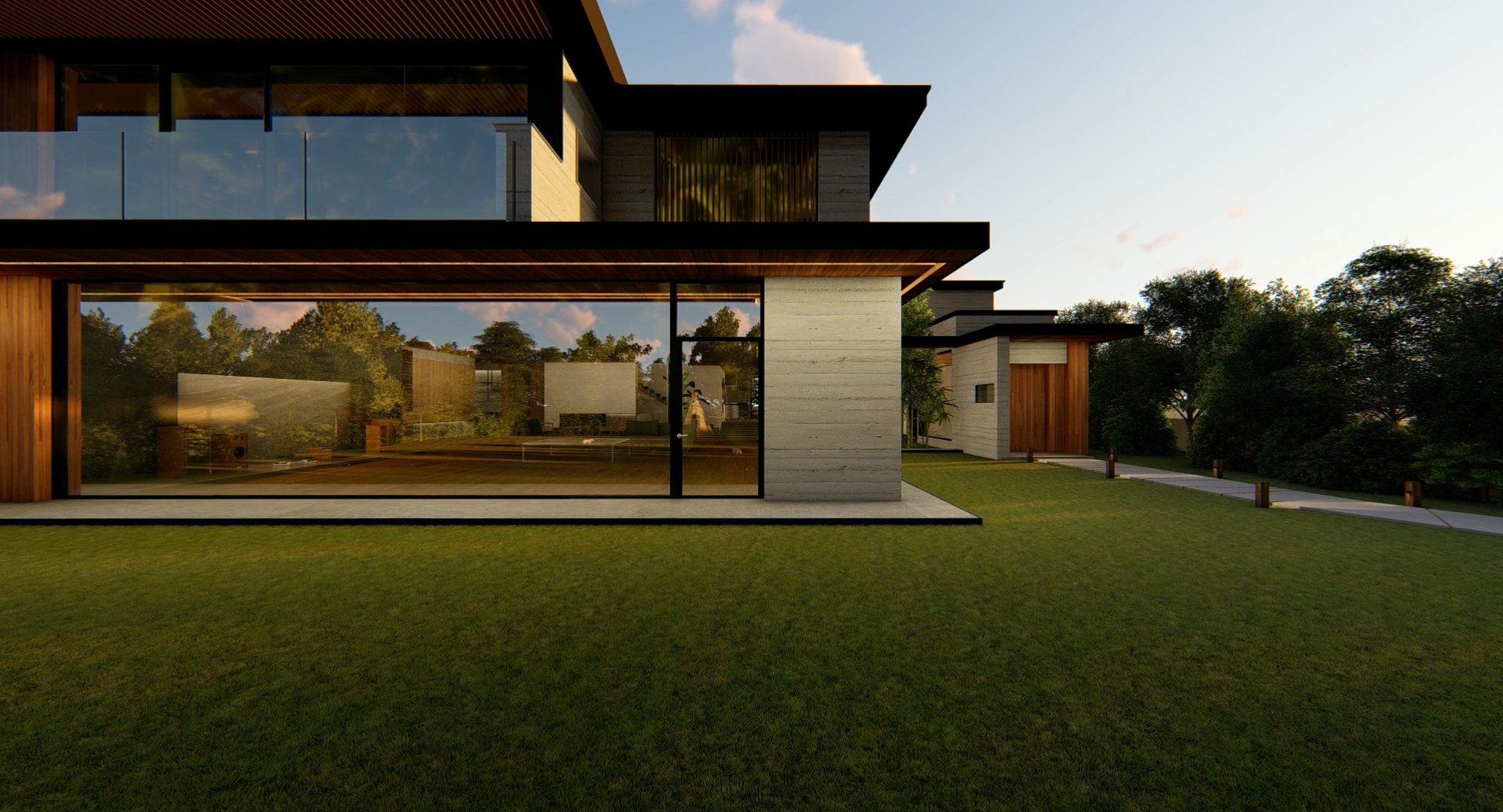 And here’s the real-life bungalow in Singapore: 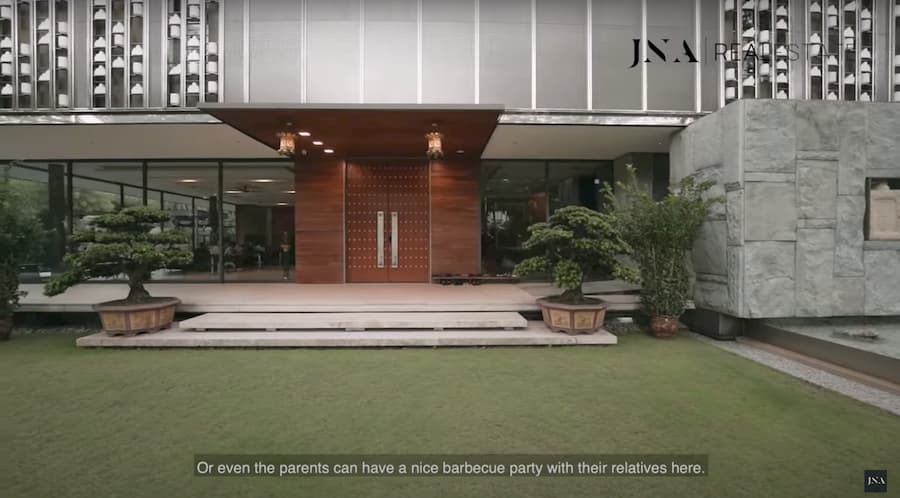 The resemblance is uncanny, but what made our jaws really drop was the house’s interior and the priceless treasures it holds.

Not to mention its hidden rooms and spiral staircases. 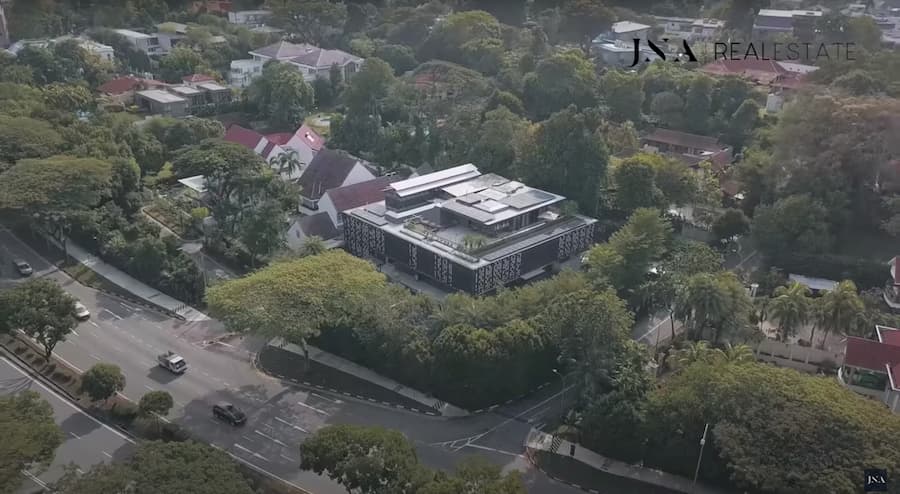 Take a tour through the fantastical house with us, as we uncover its highlights and spectacular design.

As Mr Ng begins the tour of the fortress outside, he first introduces you to the well-manicured, green lawn that looks as if it sprung out of the Bong Joon Ho masterpiece. 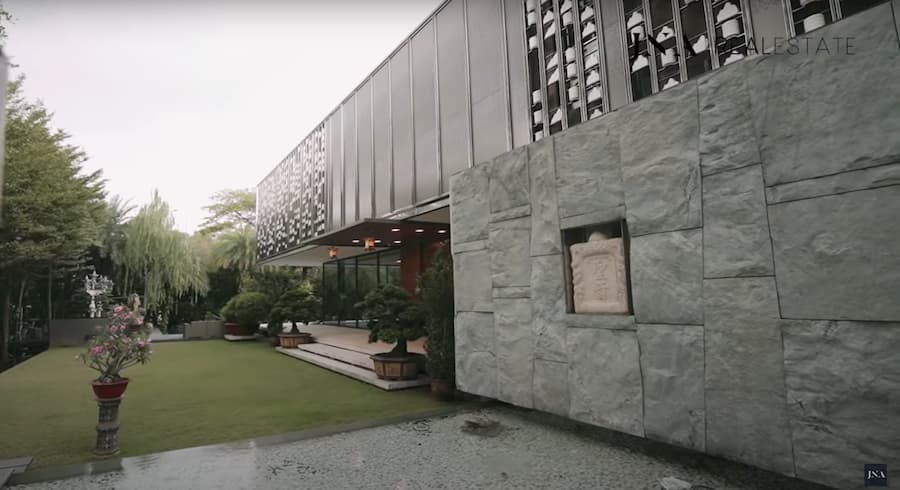 Then comes the pool. The cool blue 20m lap pool is well-guarded by a pair of Chinese lion statues from the Tang Dynasty. They’re also the largest lion statues in Asia. 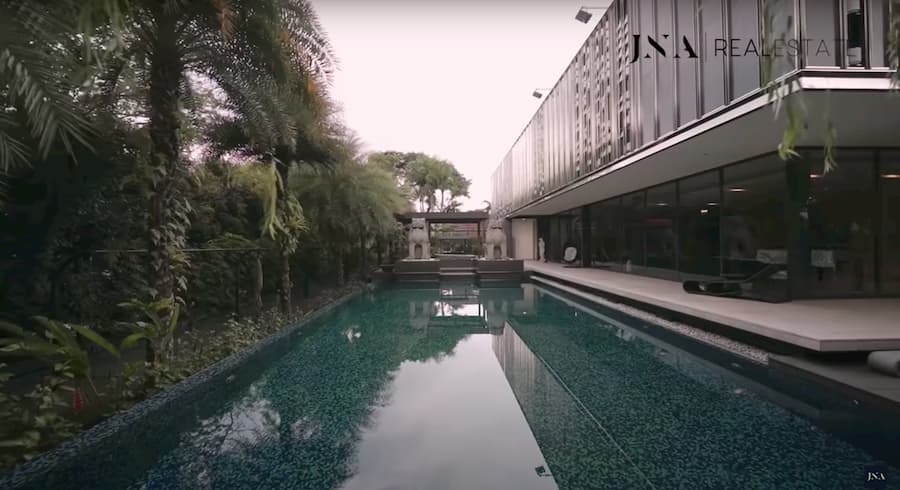 Even the exterior walls hold treasures — literally. They were specially built to model the marble balustrades in the Tang Dynasty City, and house thousands of artifacts. 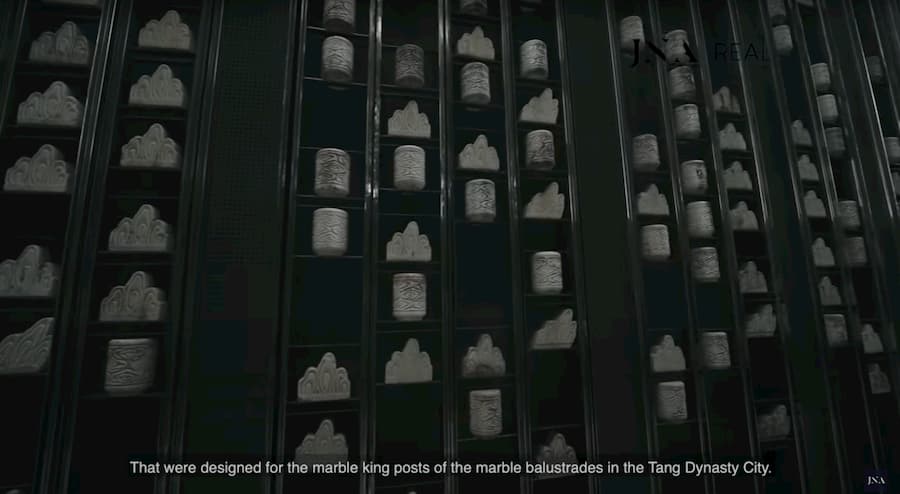 If you look closely, you can see them featured on all 4 outer walls of the house. As the house belongs to an artifact collector, there are many more ancient artifacts and collectors’ items displayed around the house, and incorporated into its design.

Upon first glance, the living area looks like one in any typical luxury home: sprawling, luxurious, with a grand piano in the corner. 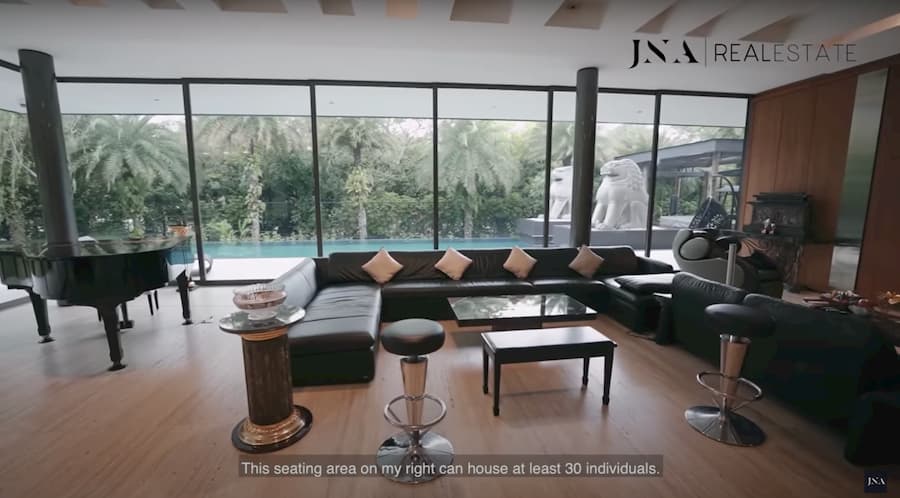 But upon a closer look at the mahogany walls, one will be surprised to find that they slide open to reveal not just a television, but a concealed doorway to the kitchen, and dining area. 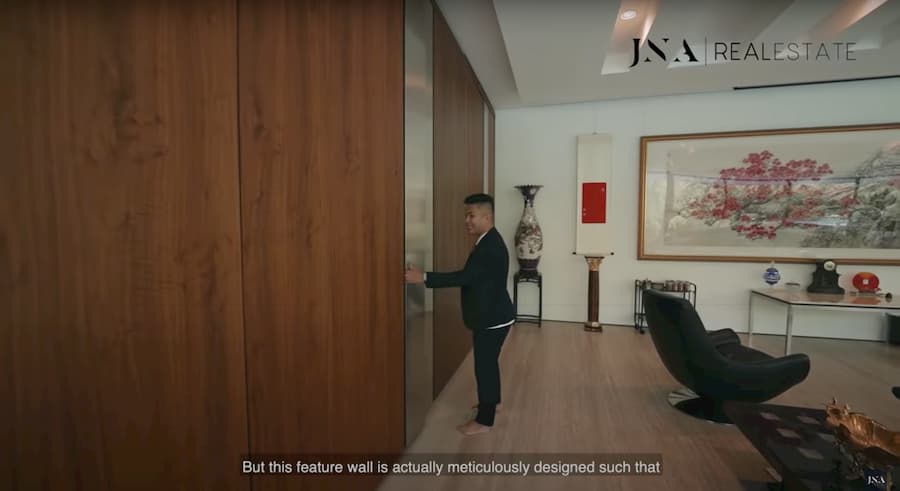 The owner even had a room designed specifically for serving tea, with a full-marble feature wall, twisted tree trunk tables and some of the world’s rarest brews all under the same skylight. 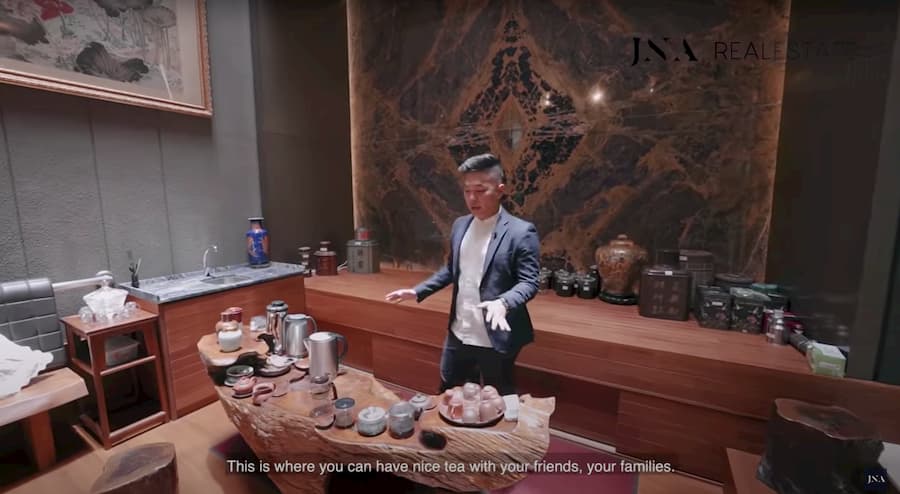 The owner even had a vintage spiral staircase from Bencoolen Street installed in his home, just for that extra bit of historical flair. 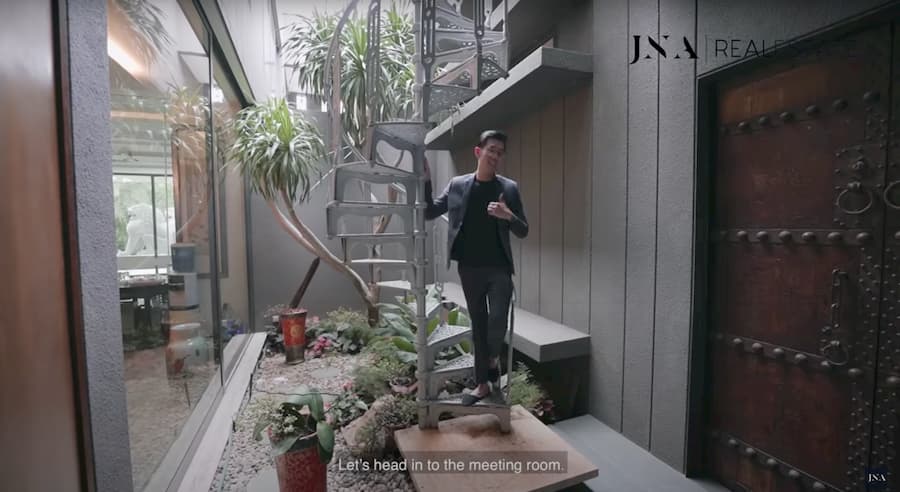 If you think that’s impressive, our jaws literally hit the floor when we saw what the basement held.

Instead of a deranged old man running from debt (like in the movie), it houses the owner’s collection of ancient relics and artifacts.

The collection seems to sprawl on forever — it’s basically a personal museum, right in the belly of the house. 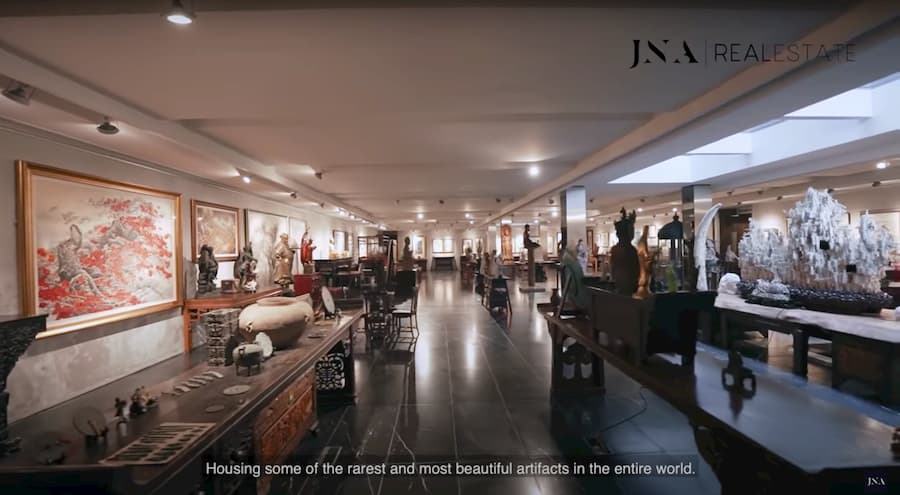 That’s not all, there’s another tea room with more artifacts displayed, including tiles from the Tang Dynasty palace, and another wall made entirely of Pu Er tea bricks. 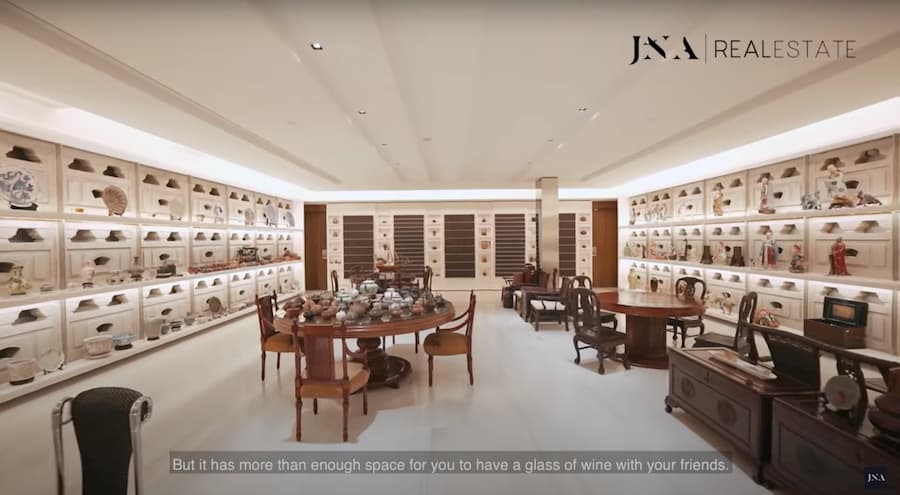 If tea’s not your thing, perhaps the walk-in, futuristic wine cellar is more up your alley. 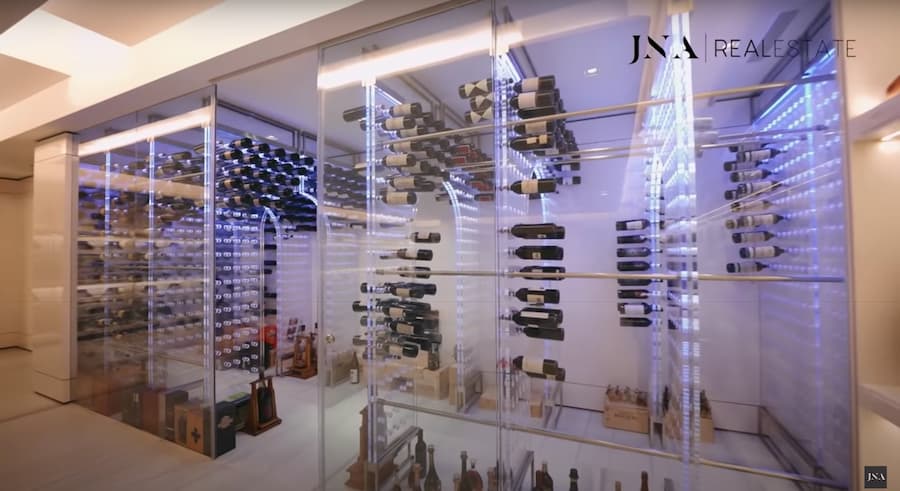 Parking garage with space for 12 cars

The basement is used for practical reasons too, of course. There’s an 8,000 square foot parking garage, with enough space for up to 12 super cars. 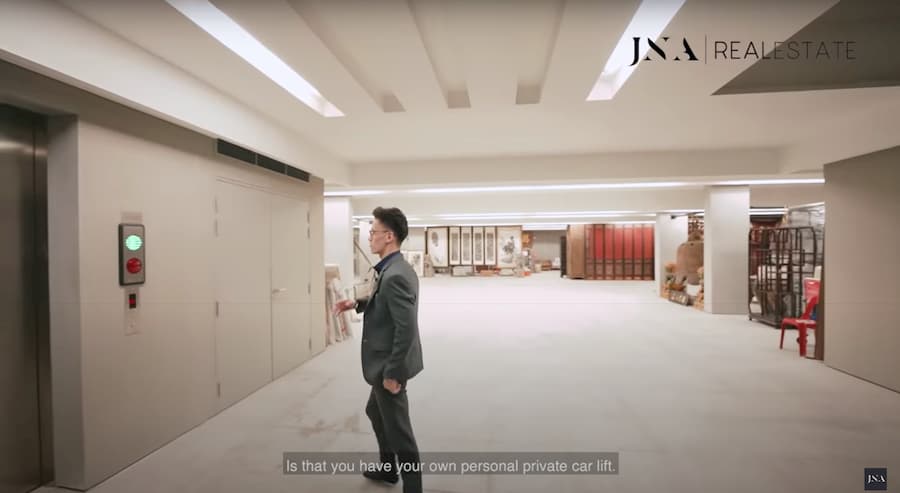 It even has its own car lift for easy access from porch to basement.

The master bedroom isn’t just a bedroom, of course. It’s a rest area, a study, and a spa rolled into one.

The rest area apparently also has a secret walk-in wardrobe behind its curved walls, but it seems like it’s only for the owners’ eyes. 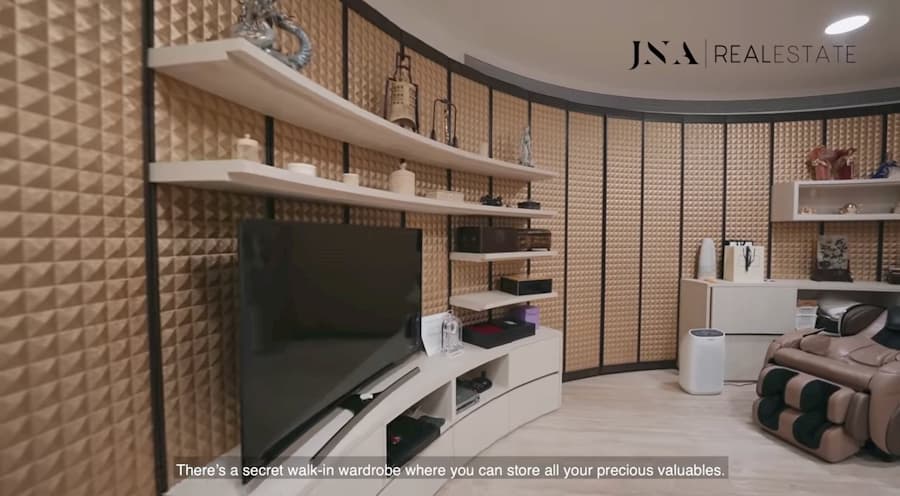 You’re not missing out on much though, as the 2-storey walk-in wardrobe makes up for that.

Featuring another spiral staircase, it’s a perfect balance of “His” and “Hers”, with a well-lit vanity and watch case to boot. Right through the glass door is the bathroom, or mini-spa, with a jacuzzi big enough for 2. Our motivation to work hard & get rich

The “Singaporean Dream” is typically known as the “5 Cs”, but after seeing this beast of a mansion, we’d like to dub it the 3Bs: Big Beautiful Bungalow.

Of course, money doesn’t come easily, and we sincerely applaud whoever owns this house for their hustle to bring this masterpiece to life. It’s definitely a huge motivation to work hard and get rich.