Both of them have been isolated.

With an increasing number of cases being seen around the world, monkeypox was declared a global health emergency on Saturday (23 Jul).

In Singapore, more cases are also being discovered. The Ministry of Health (MOH) announced yesterday (24 Jul) that there are now a total of eight monkeypox cases in Singapore, after two were discovered on Sunday.

One of them involves an Estonian man who entered Singapore on 21 Jul, while the other involves a local Singaporean man.

Both of them are not currently linked to other confirmed monkeypox cases.

After the 46-year-old Estonian man entered Singapore from London on 21 July, he developed rashes in the groin area as well as a fever and a swelling of the lymph nodes.

He then sought medical care and tested positive for monkeypox on 24 Jul, before being admitted to the National Centre for Infectious Diseases (NCID).

He is considered an imported case.

As for the 26-year-old Singaporean, he also developed genital rashes as well as on other parts of his body, and sought medical care on 24 Jul. He also tested positive for monkeypox the same day and was admitted to NCID.

Health Minister Ong Ye Kung also posted an update on Facebook this morning about whether the population will be vaccinated against monkeypox. 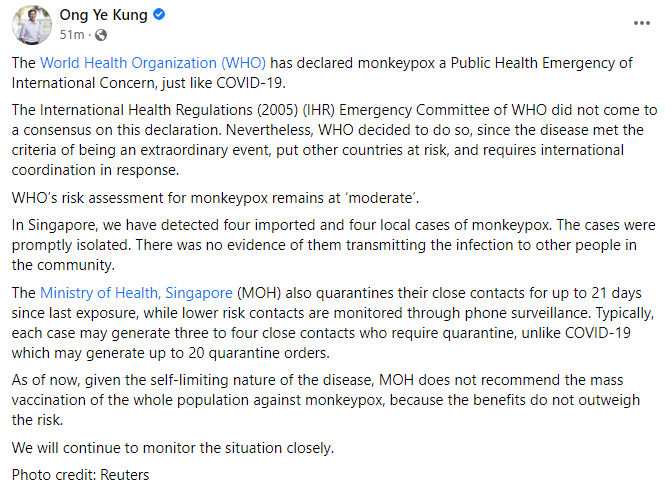 He noted that the World Health Organization (WHO)’s risk assessment for monkeypox remains at ‘moderate’.

Singapore is also isolating all confirmed monkeypox cases and quarantining close contacts for up to 21 days.

“Typically, each case may generate three to four close contacts who require quarantine, unlike Covid-19 which may generate up to 20 quarantine orders,” Mr Ong said.

As of now, given the self-limiting nature of the disease, MOH does not recommend the mass vaccination of the whole population against monkeypox, because the benefits do not outweigh the risk.

Seek medical attention if you have common symptoms

While monkeypox is a developing concern, the news that it is not as transmissible as Covid-19 is somewhat of a relief.

Regardless, isolation is key in breaking chains of transmission. Do seek medical attention if you start developing common symptoms, such as fever, swollen lymph nodes, and rashes.