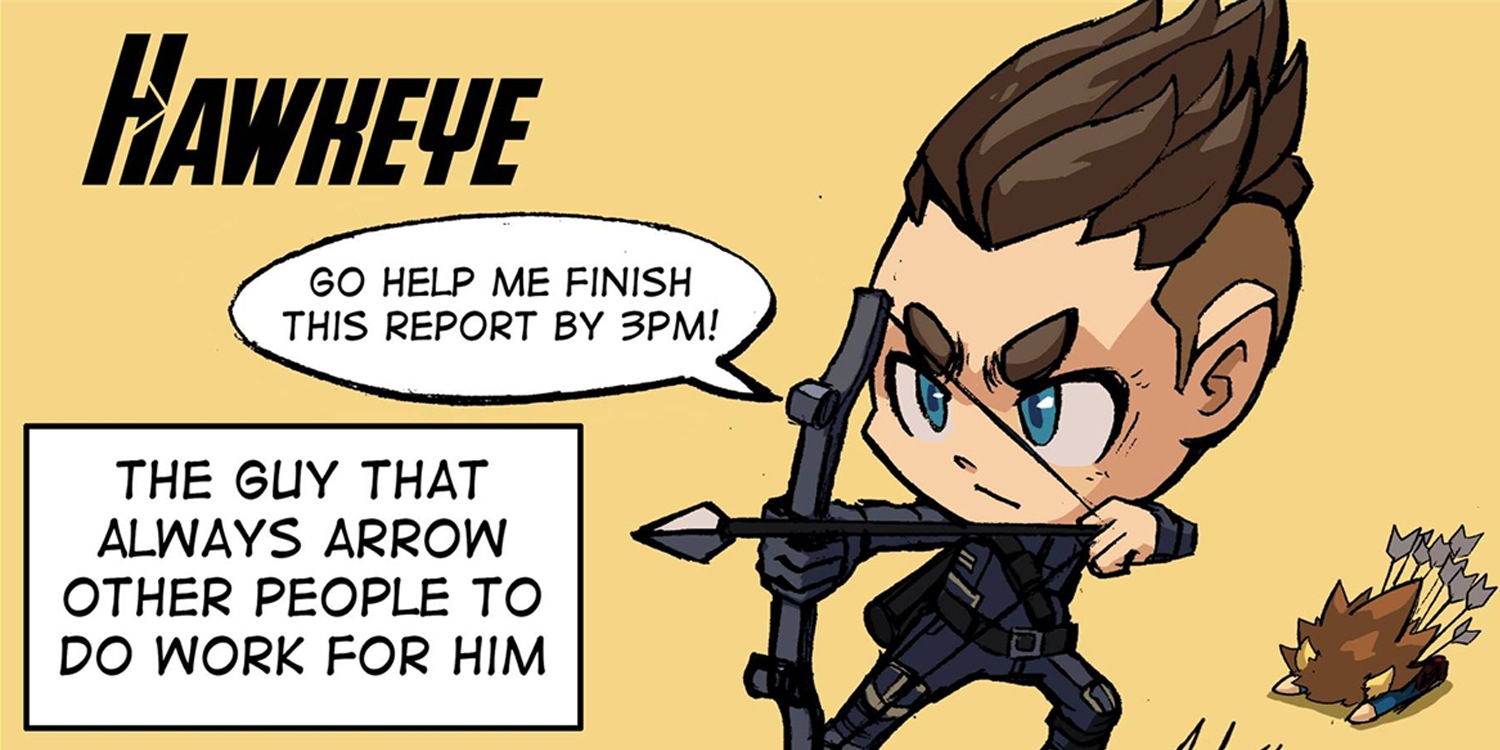 By now, most of us must have sat through the 3-hour long movie marathon that is Avengers: Endgame.

But if you’re still feeling depressed over the show’s ending, perhaps this light-hearted approach to the show will get you smiling again.

On Thursday (2 May), Andimoo Studios, a comic studio in Singapore released a series of hilarious pictures depicting Avengers superheroes as characters in corporate offices. 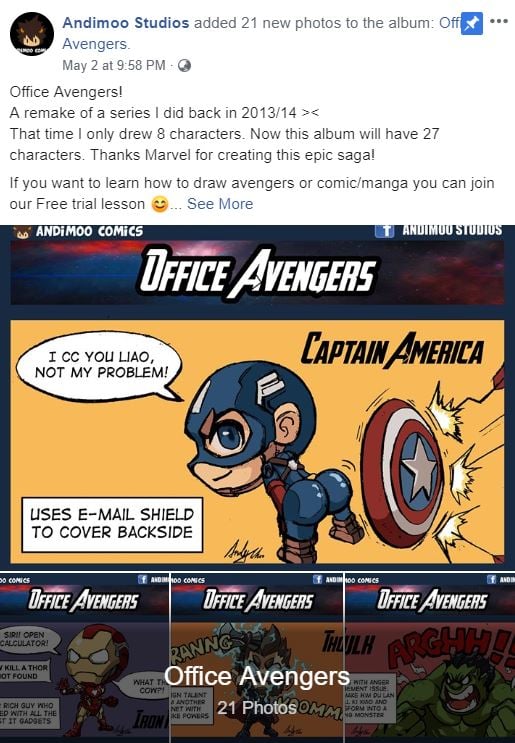 Here are some of the highlights.

1. Those who constantly arrow others with work

Hawkeye shoots arrows to kill enemies, but some in the corporate office shoot others with work instead.

Some say that this form of projectile is even more deadly than steel arrows.

To protect yourself from these ‘arrows’, cover your backside using an e-mail shield, akin to Captain America’s shield that has proved useful over the years.

If it’s enough to protect America’s Ass, it’s probably overkill for us.

Every office will definitely have those with anger management issues. You’ll probably know who we’re referring to, those who go berserk over the slightest things.

Next time you see them raging, tell them to learn a thing or two from Dr Hulk,  instead of wasting money going for counselling sessions. #justkidding

4. Tech wizard that fixes everything

Every office has an IT wizard that knows what to do whenever the computers fail.

5. The receptionist who resort to the same phrase

Let’s not forget the office receptionist who has grown so jaded of his job and has now resorted to answering every question with the same phrase in a monotone voice.

You may also have seen the rumoured high-flyer who’s rumoured to be on a straight path to management but with a constant RBF.

7. Workers who chiong out of the office at 5pm

In the evening as the clock strikes 5, some office workers make a mad dash for the doors.

Rumours are, these chiong-ers are even faster than Quicksilver at their maximum speed.

8. Sabo Kings of the office

There are also those in the office who have the tendency of screwing things up at the last minute, just like what Star-Lord did in Avengers: Infinity War.

The consequences may not be as dire as losing half the world’s population, but definitely bad enough for that individual to be called the Sabo–King.

9. Those obsessed with the latest IT gadgets

And then there are those obsessed with the newest IT gadgets, who change their phones and tablets on a monthly basis.

You may not know this, but chances are that they probably worship Tony Stark the IT guru of the Marvel universe.

10. Bosses who fire workers with the snap of a finger

Finally, some may be familiar with the boss who fires half of his employees in the name of saving his company.

Not sure if these bosses meet the same fate as Thanos himself, but we guess it would be wise for them to stay away from axes.

Another comic strip for Game of Thrones finale?

If you would like to check out the full album of comics, check out Andimoo Studios’ Facebook page here.

Good job on their part for coming up with these hilarious yet relatable comics that all Singaporeans – Marvel fans or not – will certainly enjoy.

Not sure about you, but we hope they will release another comic for the Game of Thrones finale later this month!