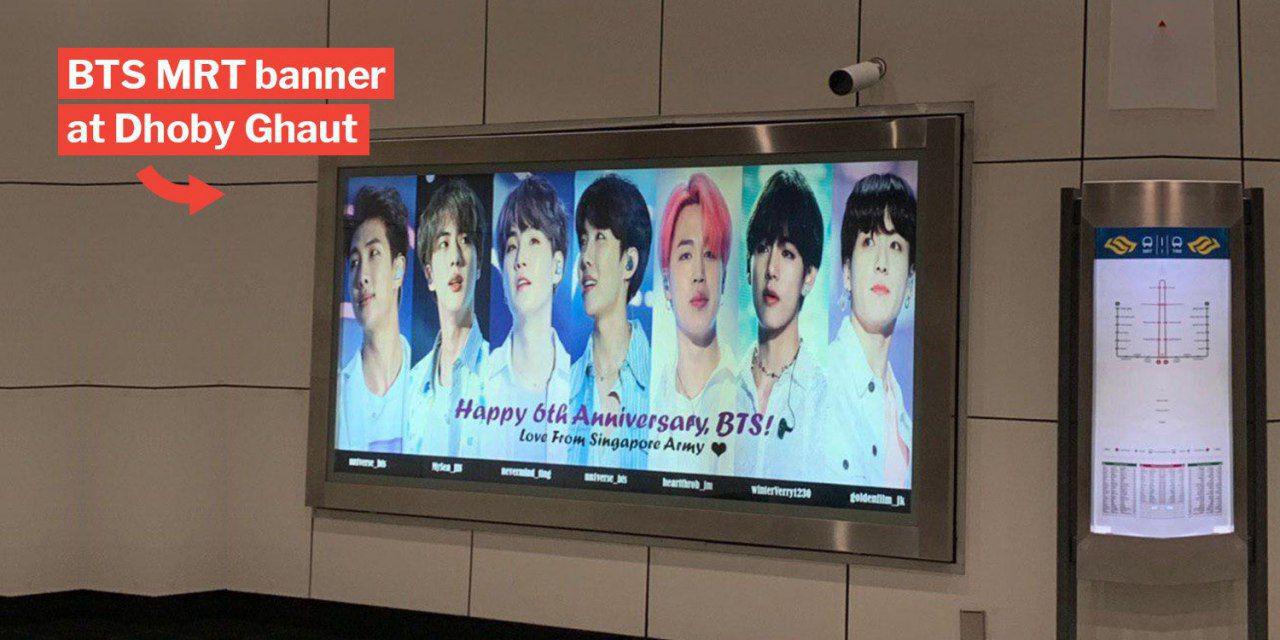 2019 has been a spectacular year for BTS fans – aka ARMY – with the ‘Love Yourself‘ concert being a smash hit with local fangirls and boys.

As a mark of their enduring admiration for the pop septet, Singapore ARMY have gone above and beyond by buying out an actual MRT banner at Dhoby Ghaut to celebrate the 6th anniversary of the boyband. 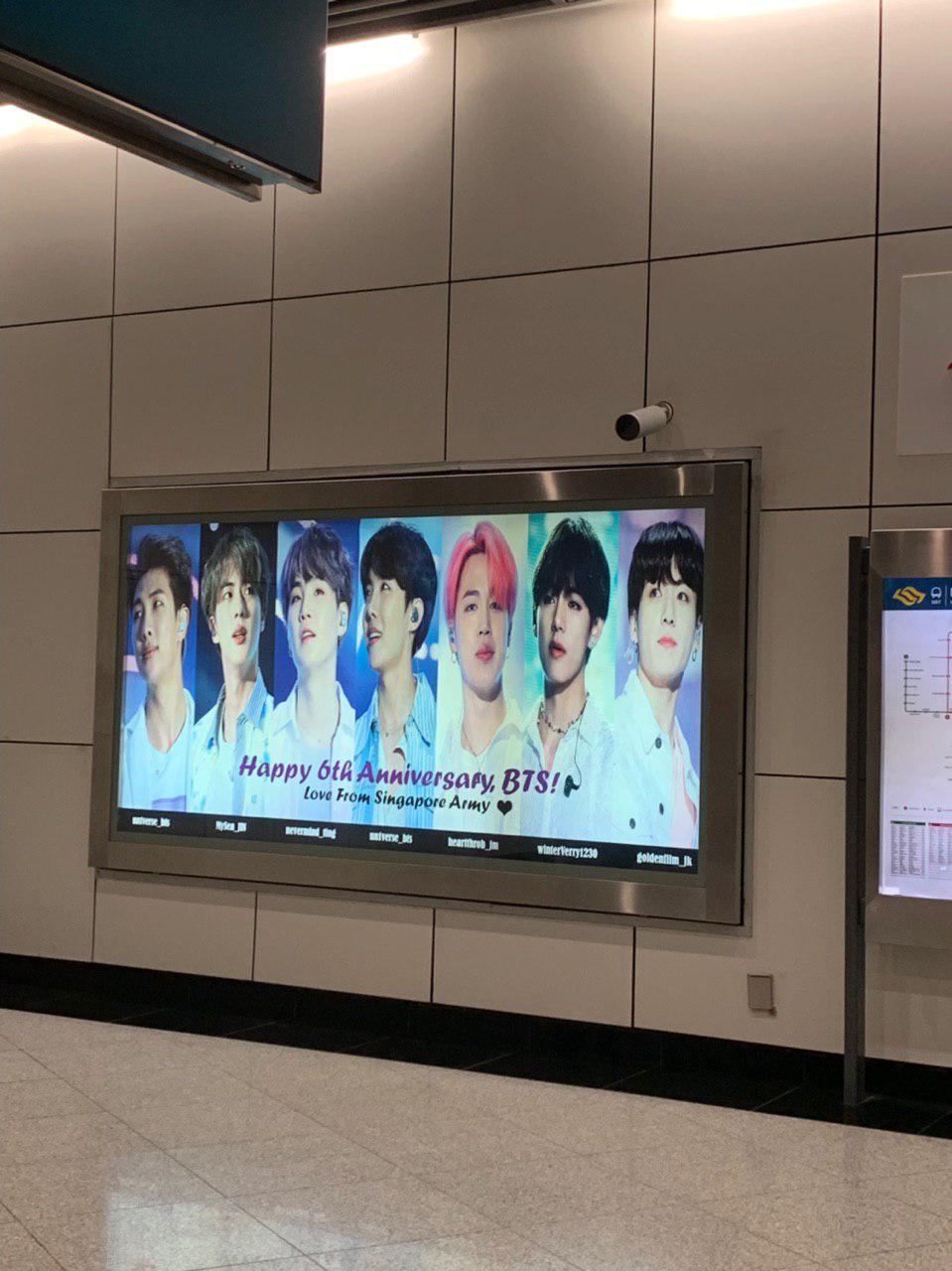 Plus points for dedication. And happy anniversary to BTS, of course.

A popular practice in Korea, it’s rather uncommon for a K-Pop fandom to amass the resources to achieve something of this scale in Singapore. 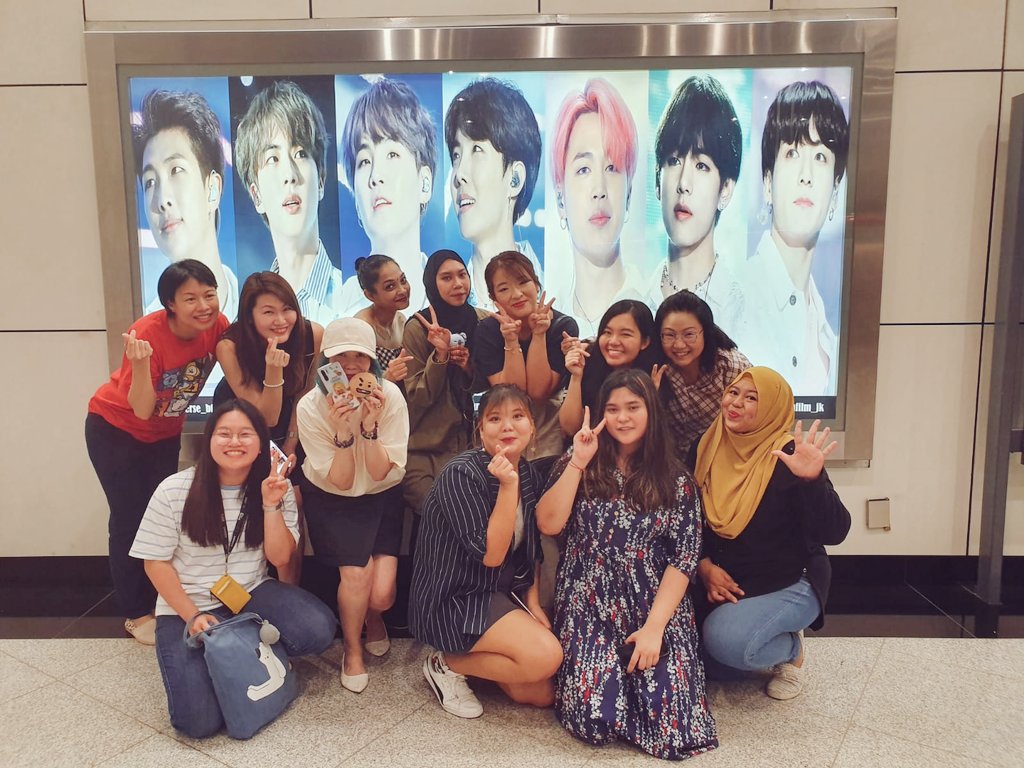 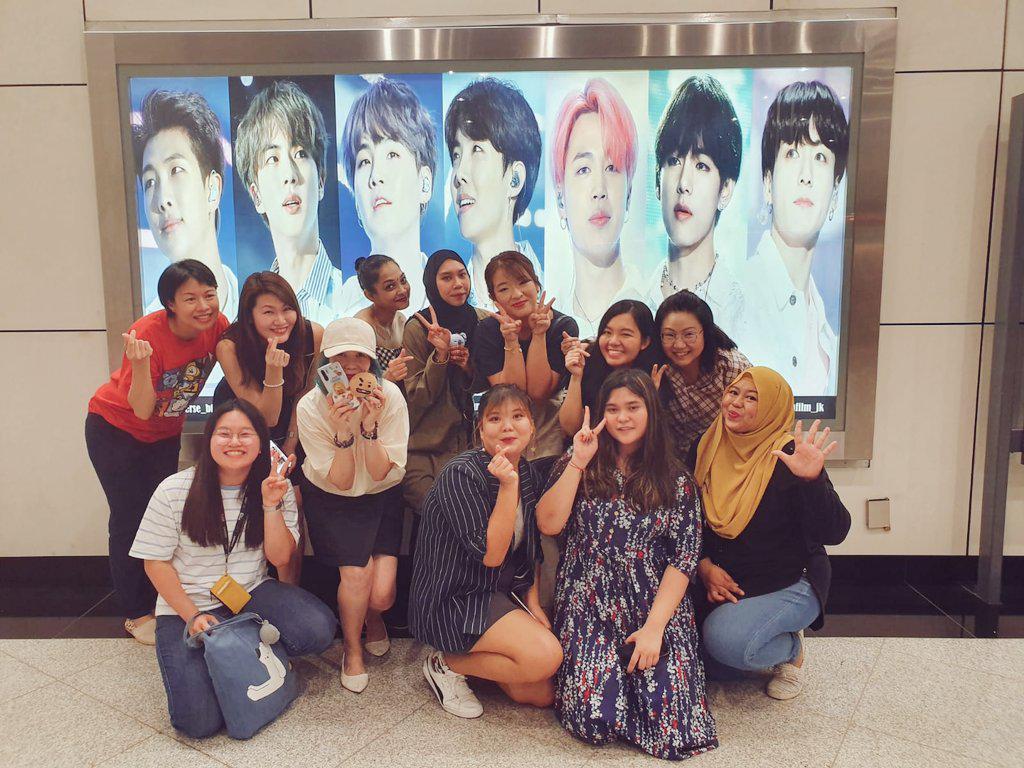 But the banner seems to be going over well with Twitter fansites dedicated to the boyband. 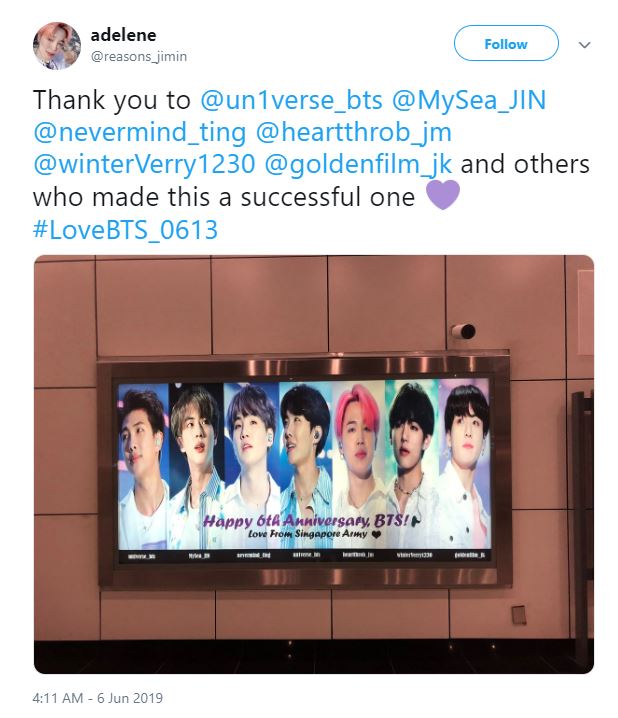 Fans have also gushed about how they loved seeing the billboard while passing by Dhoby Ghaut MRT station in numerous tweets. 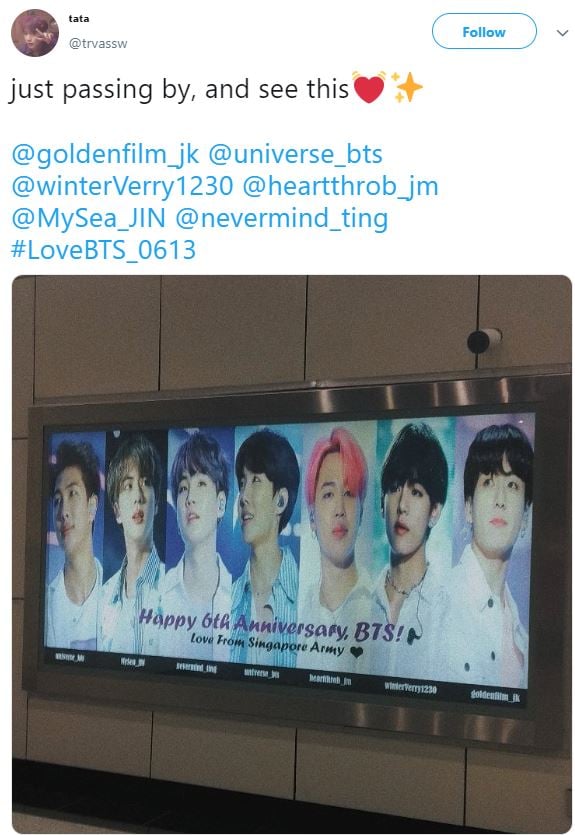 Like us, you may be wondering how much that would cost.

We did the math, in case you’re planning to post a billboard of your own for whatever reason.

SMRT lists a 12 Sheet banner within a Circle Line station going for a weekly rate of S$280-420 per panel.

Taking the lowest panel rate, that comes up to about S$3,640 for the full duration of the billboard being up. To make a quick comparison, large format lightbox ads start at S$1,870/week.

Regardless of the prices, we’re sure that would be a small price to pay for the fans to commemorate 6 years with their favourite band.

The Twitter campaign lists that this banner will be up from 6 Jun to 3 Jul.

BTS is a force to be reckoned with

Singapore ARMY has definitely proven their love for the K-Pop boyband that has rocketed to global fame.

Their new single ‘Boy in Luv’ continues to top charts in the US, as they graced late-night TV shows and played as a solo act to a sold-out crowd in Wembley Stadium, London. 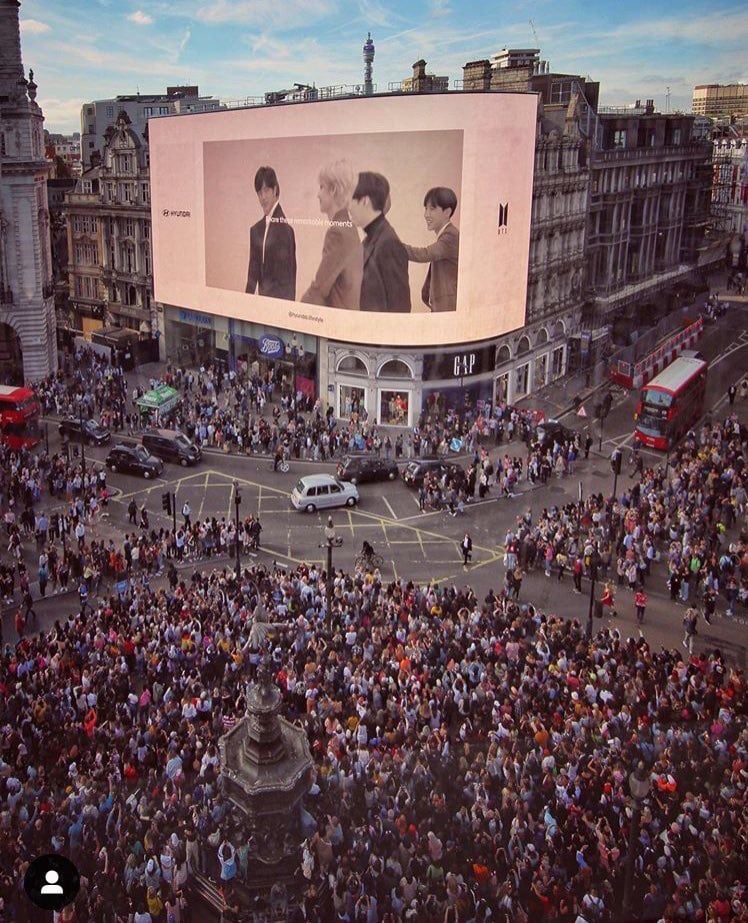 Here’s a reminder of how fans queued for tickets at Kallang Wave Mall last year, to snag a chance to see their oppas up close. 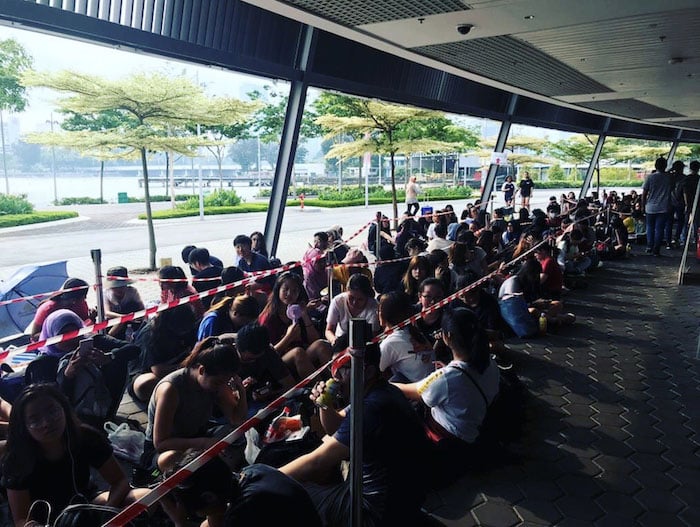 Come back to Singapore anytime, BTS

The Singapore ARMY is clearly a dedicated fanbase that will continue to root for BTS in the future. The band’s star isn’t set to fade anytime soon, at the rate their popularity is still growing all over the world.

Hopefully, they’ll be able to make time for another Singapore stop in their future concerts. In the meantime, you can make a pilgrimage to Dhoby Ghaut MRT station to snap a photo with your oppas to wish them a happy anniversary.

The banner should be up for a while, and it’s near the Circle Line entrance. Don’t forget to hashtag ‘#LoveBTS_0613’ to join the revolution. You’re very welcome.