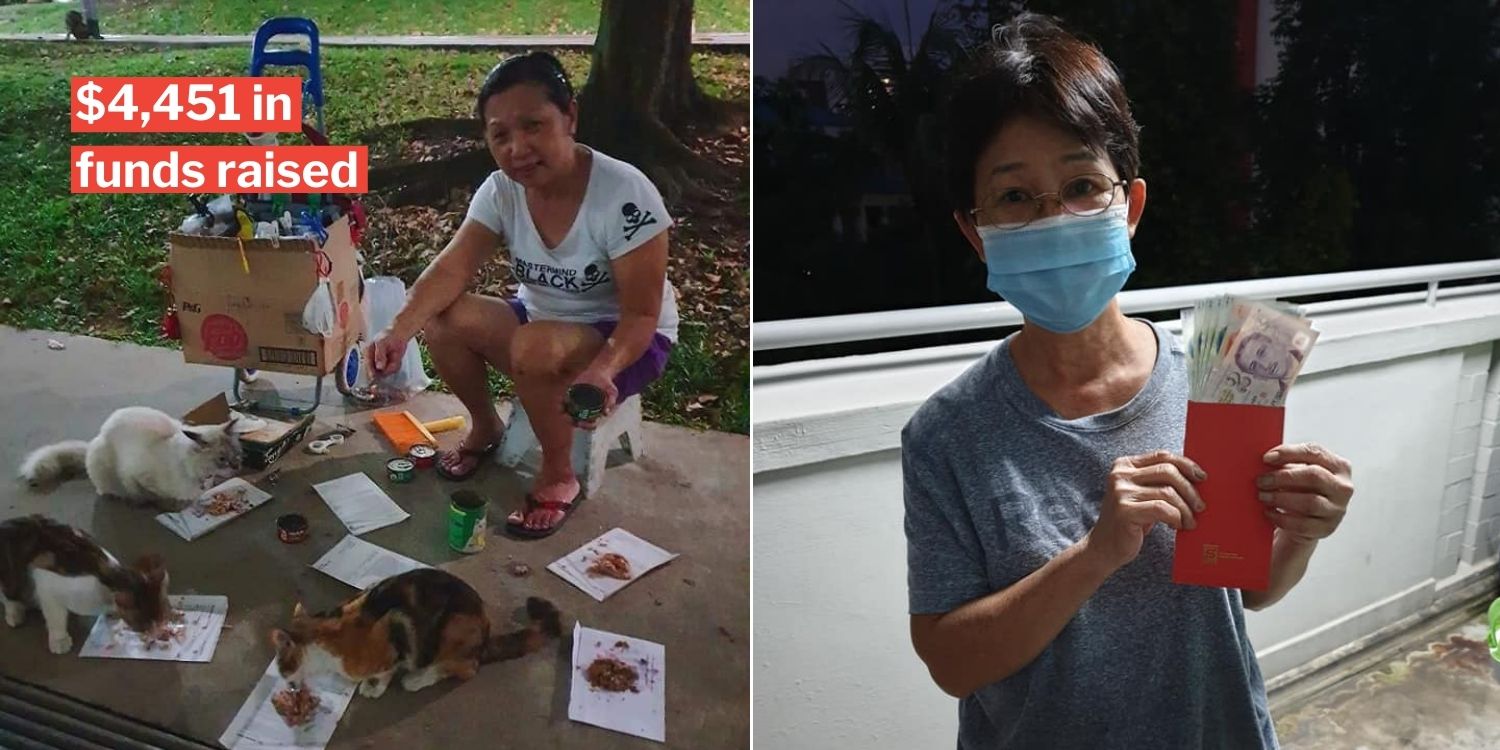 18 Cat Feeders Get Ang Paos Of At Least $242 Each, Initial Target Of $500 Exceeded Many Times Over

Singapore’s community cats are an integral part of our estates, and they’re well taken care of by dedicated cat feeders.

They ensure the beloved cats don’t go hungry, but sometimes we forget that they require lots of money and energy to keep up the selfless work. 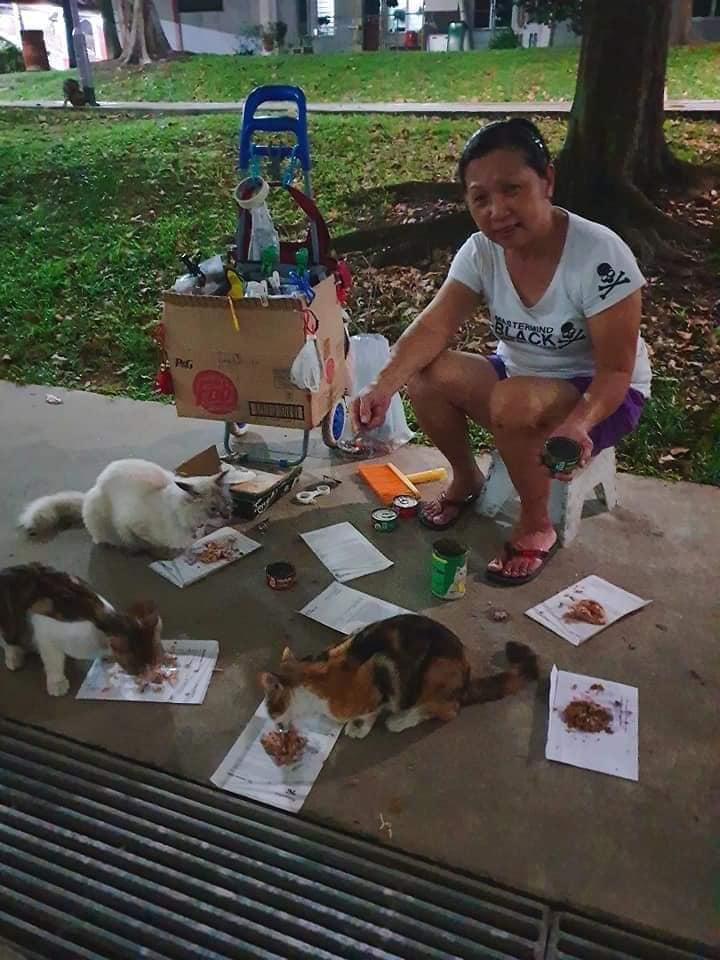 Thus, a cat lover decided to do something to thank those who take care of our community cats despite having problems of their own.

She posted an appeal for funds over Facebook for generous donors to help lighten their load. 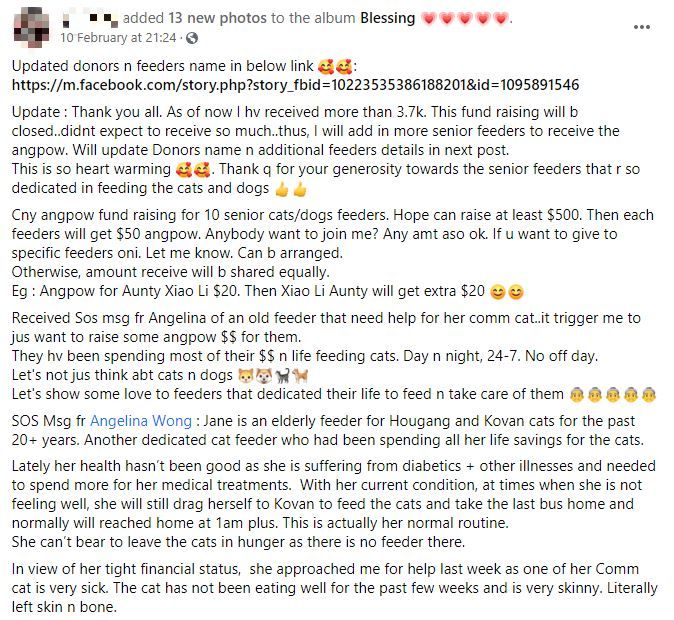 The fund-raising was a resounding success, and 16 carers got ang paos of at least $242 each for Chinese New Year (CNY).

It started when a netizen by the name of JJ Chong received word that an elderly lady needed help.

The lady, named Jane, had been feeding community cats in the Hougang and Kovan area for the last 20 years or more. 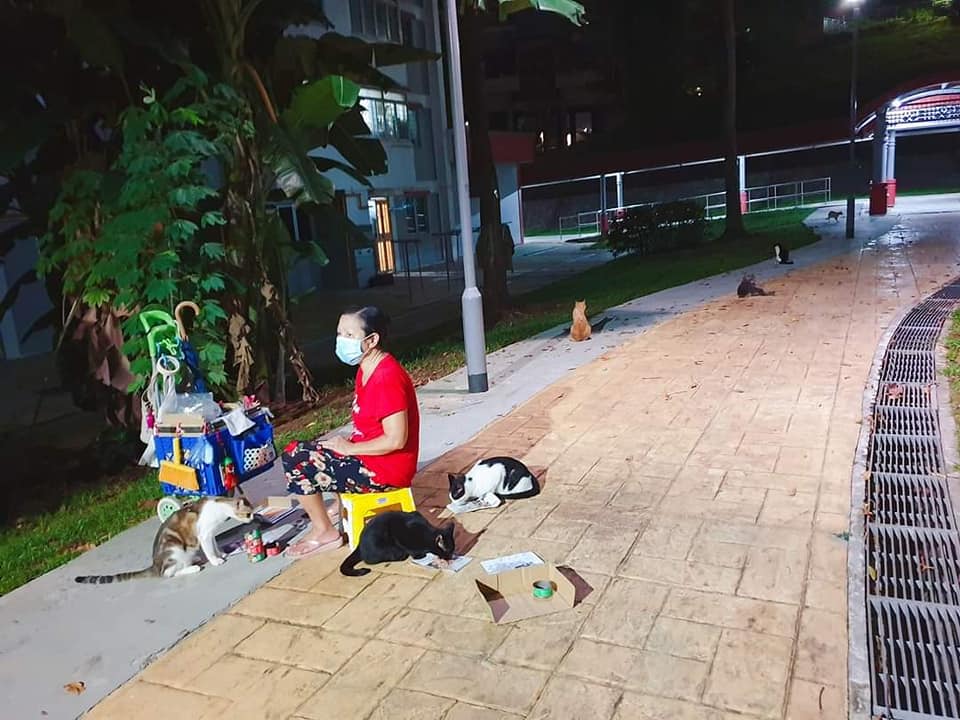 However, Jane has recently ran into problems of her own – poor health.

According to the message, Jane is suffering from diabetes and other medical problems, and needs to spend more of her money on treatment.

Despite not feeling well, she still spends the night feeding cats as per normal, reaching home after 1am. 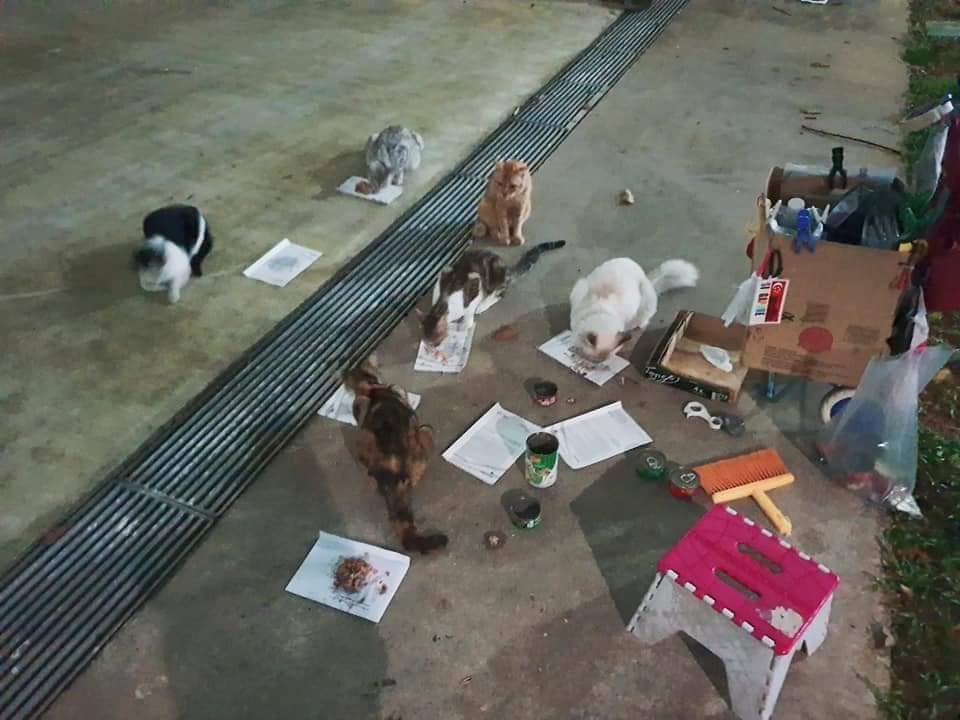 That’s because she’s afraid if she doesn’t do that, the cats will go hungry as there’s apparently no other cat feeder in the estate.

Worse still, lately 1 of the cats hasn’t been eating well and has become very skinny.

In her post in the Cats & Kittens of Singapore Facebook group on Wednesday (10 Feb), she said she hoped to raise at least the modest sum of $500 so she could help out 10 cat feeders that she knew.

She planned for each of them for get $50, which would still go some way towards defraying the cost of feeding the cats daily for most of their lives. 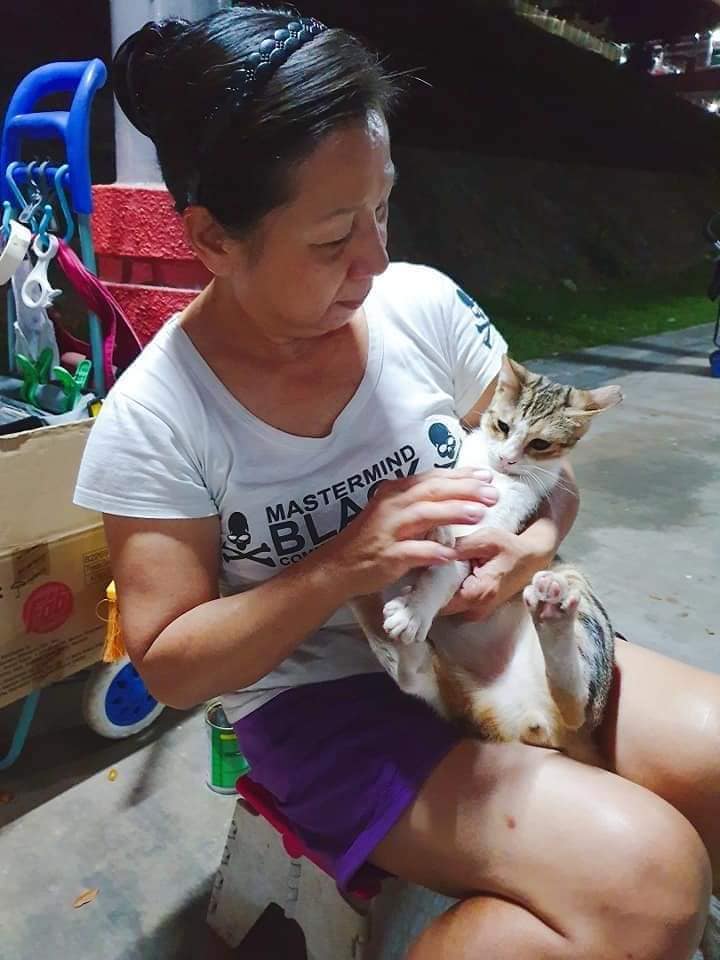 The cat lover said those interested could transfer the cash via PayNow to her at the phone number 91592281.

She ended up getting way more than she bargained for.

Later, Ms Chong updated her post after she received more than $3,700.

Overjoyed, she thanked donors for their generosity and said she will send ang paos to more senior cat feeders than initially planned.

As such, she’ll now hand out ang paos to a total of 18 feeders. 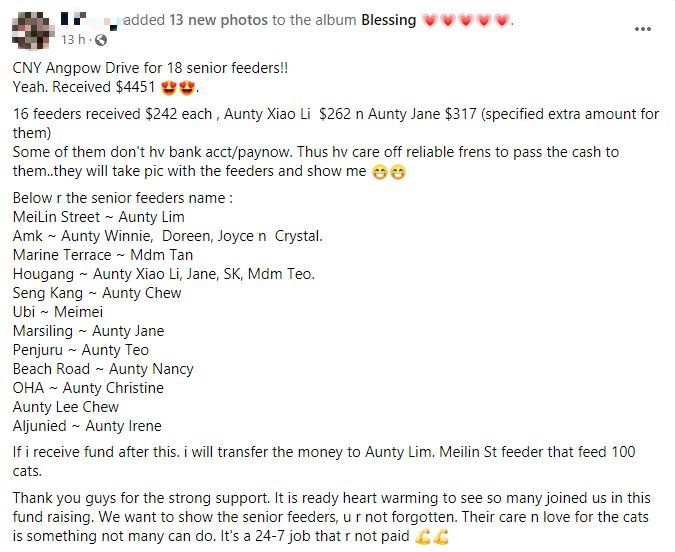 Listing out the name of the feeders, she said 16 of them will get $242 each, while 1 in Hougang that she mentioned earlier will get $262.

Jane, the feeder who needed help because of her medical problems, will get $317.

Any extra funds she receives after this will go to a feeder in Mei Ling Street, Queenstown, that takes care of more than 100 cats.

Ms Chong also listed out the names of the donors, a total of 65 in all. Some of them were anonymous.

Ms Chong sent most of the feeders their ang paos via PayNow. 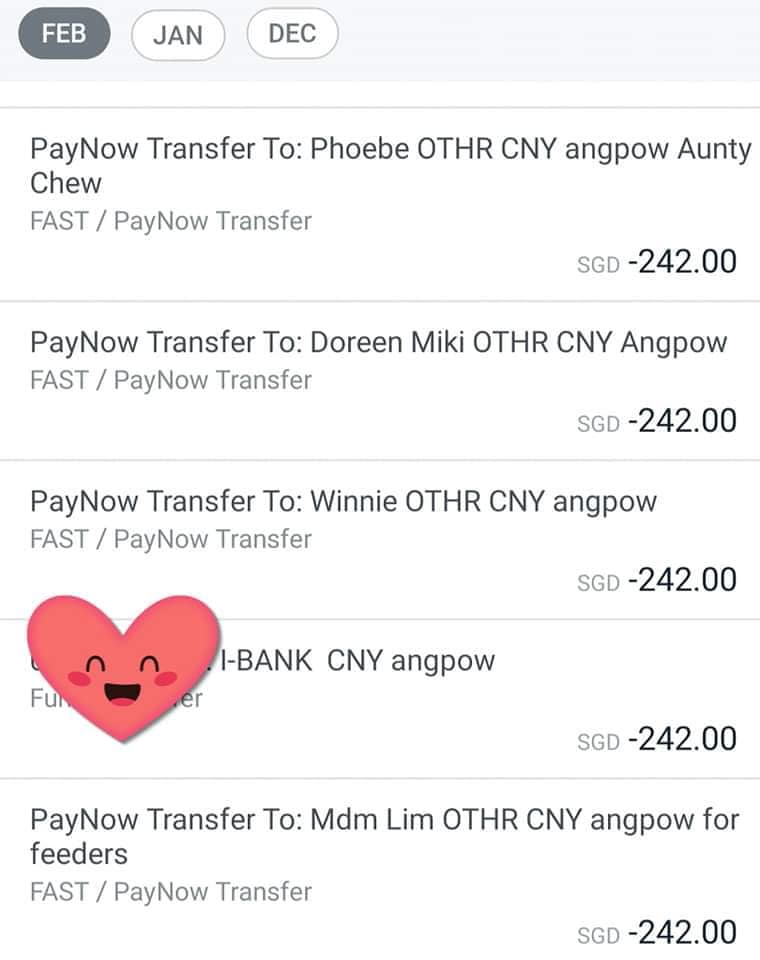 However, some don’t have bank accounts or don’t use PayNow.

Thus, she sent friends to give them the ang paos the old-fashioned way – in person. 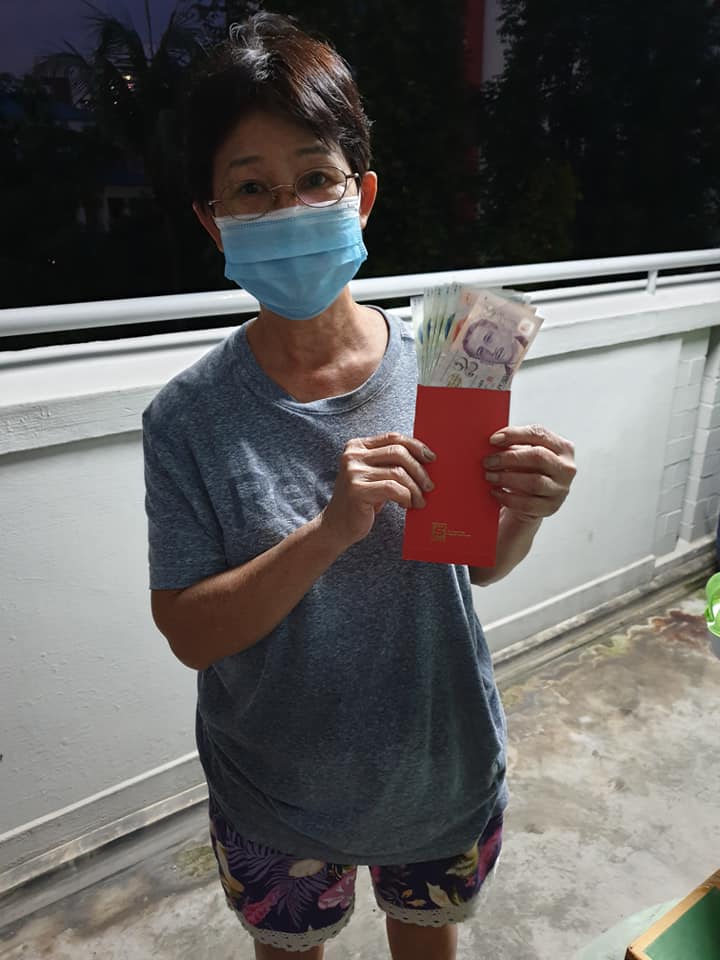 Feeders thankful for the ang paos

The grateful recipients gave thanks upon getting the ang paos. Knowing them, they’ll be channeling the cash back to feeding the strays. Some of the feeders were so selfless that they said the money should be given to the oldest and poorest feeders instead. 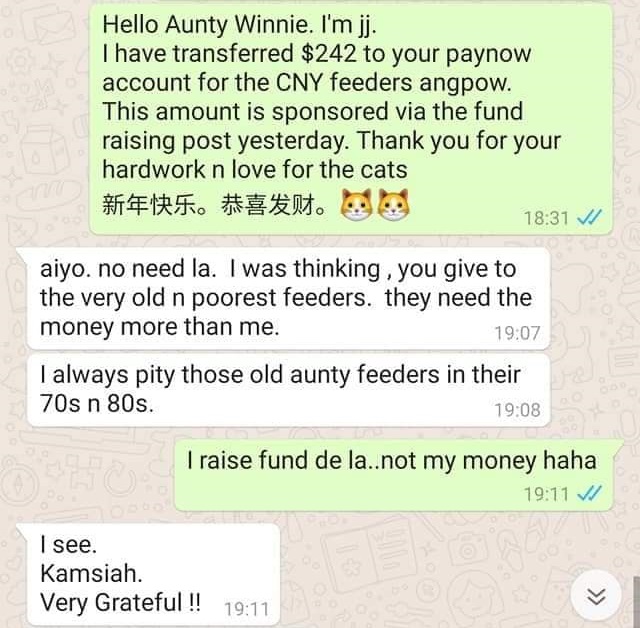 All in all, it was just reward to the feeders for their tireless devotion. 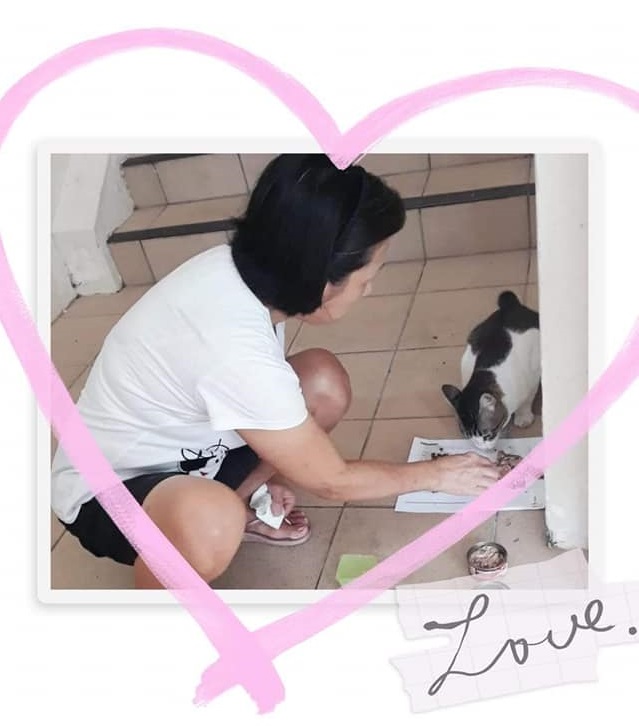 Kudos to our cat feeders and their donors

While worrying for the welfare of our cute community cats, we may neglect the human beings that care for them unfailingly.

Many of these people with a heart of gold have spent the whole lives caring for animals that otherwise will be left to fend for themselves. 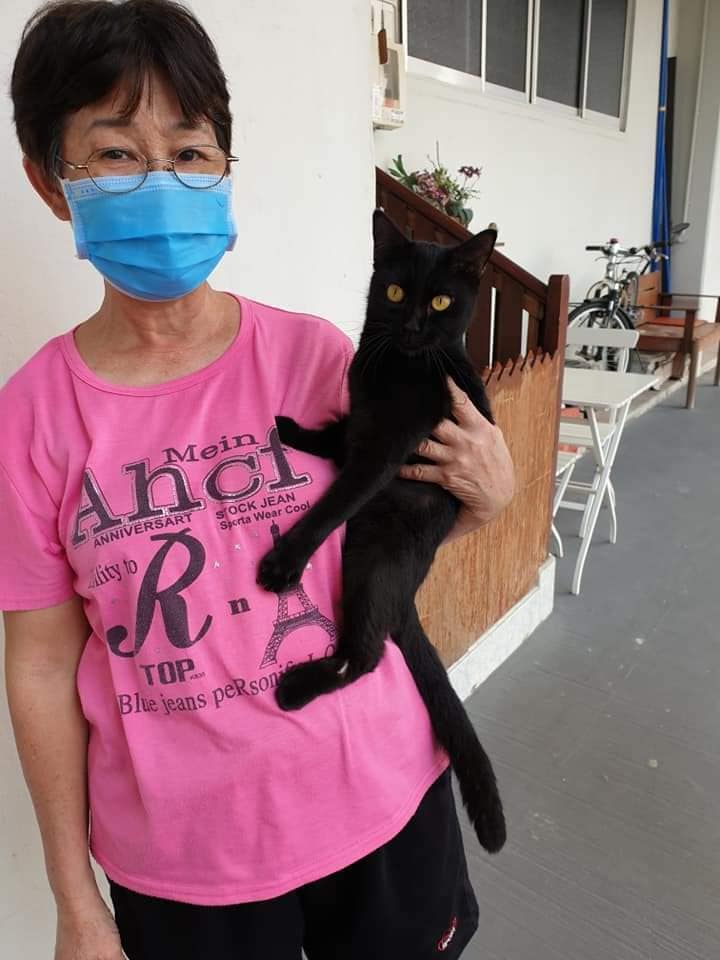 Thus, they fully deserve to be shown some tender loving care, too. So if you’ve some extra cash, do consider helping them out.

Kudos to our cat feeders, and to those who’ve generously donated to give them some CNY joy.